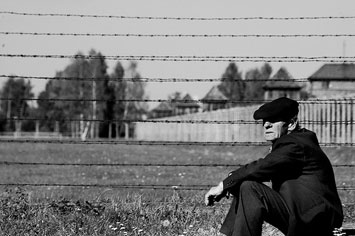 Grief Tourism: Straddling the Boundary Between Sympathy and Snooping

Would you think twice about visiting a war cemetery? Probably not. What about touring a concentration camp? I know some people shy away from that. And how about traveling to an otherwise unremarkable village just because it was the place where two young girls were brutally killed? That certainly wouldn’t be on my sightseeing list, but it does attract some travelers.

These are all forms of grief tourism – traveling to visit the scene of a tragic event – and some of them seem so mild that I think many of you will be surprised to learn you’re technically classed as “dark tourists”. I’m curious about the motivations of people to visit the various kinds of grief sightseeing destinations, so I’m going to consider a few different kinds of places and try to figure out why we go there, and whether or not I’m a grief tourist.

Visiting War-Related Sites: From Battlefields and Cemeteries to Concentration Camps

I suspect that visiting war-related sites – especially those from the First and Second World War – is the most widely practiced form of grief tourism around the world. Across Europe I’ve visited cemeteries in France, battle grounds in Belgium, and concentration camps in Poland, just to name a few.

Visiting cemeteries and war memorials can be a little emotional for me. I’ve never lost anyone close to me in war, but I’m easily affected by the grief of others. Years ago I toured the Australian War Memorial in Canberra and couldn’t sleep that night after meeting an elderly woman there, visiting with her family, who’d lost her husband to a battlefield.

Yes, these places are full of grief, so why do we visit them? It seems more easily justifiable in this case: we want to remember those who died to fight for some kind of justice, or for the good of our country, and to show respect to them and their families.

But what happens when we get to even more tragic places like concentration camps? I was profoundly affected by my visit to the Auschwitz and Birkenau concentration camps in southern Poland, where at least a million people were exterminated by the Nazis in World War Two. I visited the camps with the idea that I should understand the history better, and seeing the remnants of the gas chambers and the empty suitcases of the prisoners made the history extremely real. In fact, it gave me nightmares for several days.

Some people have told me they have no desire at all to visit a place like Auschwitz. They say they understand the tragedy that occurred and don’t need to see it first hand to learn from it. But at the same time, almost nobody would judge someone who did decide to tour a concentration camp.

Princess Diana and the Soham Murders: Where Grief Tourism Oversteps the Mark

… visiting the site of the incident would be seen by most people as pure rubbernecking – looking for the sake of looking without any purer intent.

For me, there is a level of grief tourism that clearly oversteps the boundary of what is moral and acceptable. I guess the easiest way I can define this is when the event is relatively recent and when visiting the site of the incident would be seen by most people as pure rubbernecking – looking for the sake of looking without any purer intent.

As an example, the idea that there are tours retracing the route Princess Diana was being driven along when she was killed seems to me to be going too far. There’s nothing to learn here, and it’s not the right way to pay respect, either. But that’s just my opinion and obviously some visitors to Paris disagree with me.

Even worse, I think, is the idea of hundreds of tourists driving into Soham, the small British village where two 10-year-old girls were murdered in 2002. Locals felt threatened by the influx of strangers who, in part, perhaps just wanted to show their sympathy, but pushed the boundary of decency by posing for photographs at the memorial to the girls and the house of the murderer. In this case, I’m sure, the sensitive traveler would stay away to let the small town experience its own grief without added pressure. This incident made the term “grief tourism” famous in Britain, with a very negative connotation.

That said, I must admit to a morbid fascination at visiting the Tasmanian site of a mass shooting which occurred in Australia in 1996. The massacre of 35 people took place at Port Arthur which is, in itself, a popular sightseeing destination as Australia’s largest convict settlement. I visited only with the intention of exploring the historical side of the site, but the memorial at the cafe where many were killed intrigued me more than I would have liked. So I’m not immune to this pull to sites of grief, and I’m not sure if it’s easy for us to see the boundary, especially when the event is in the recent past. Across from Ground Zero © Shavar

Here’s an interesting fact: pre-9/11, about 1.8 million tourists per year went up to the observation deck of the World Trade Center. Post 9/11, in 2002, 3.6 million visitors came to Ground Zero to see the ruins of the twin towers. Yep, grief value can double your visitor numbers.

I’ll admit that I’ve also visited Ground Zero. I was in New York for the first time and I had to walk that way anyway, otherwise I’m not sure I would have stopped by. Once I did, though, I was surprised by how much it affected me. They say that some people go to Ground Zero – or any other grief tourism site, in fact – as a form of therapy, to help the grieving process. Others go to try to understand more about the experience that some people were forced to live through – I think that’s me. But some go out of mere curiosity, or even worse, to make money from selling related merchandise – that’s just plain wrong.

So Where Does That Leave Grief Tourism?

Of all the kinds of dark tourism, grief tourism is the kind that stretches over the longest continuum. And it’s definitely all a matter of opinion, and of what fits into your personal value system.

I’ve never met anyone who would look at me strangely if I said I was visiting a cemetery. That seems to be almost universally acceptable grief tourism. Then there’s the middle ground: is it all right to explore a concentration camp, or to pay your respects at Ground Zero? And finally, some fairly extreme forms of grief tourism, where highly curious people want to see evidence of death and crimes that interest them, regardless of the feelings of those more directly involved.

It’s really up to you to decide where your boundary lies when you’re making a decision on visiting a grief tourism site. I guess I’d hope the guiding principles would be these: Will I learn something useful? Will I increase my understanding of the world? Will I hurt other people by intruding on their grief? Is it morally okay for me to be in this place at this time?

What are your thoughts on grief tourism? Feel free to share them in the comments section below.