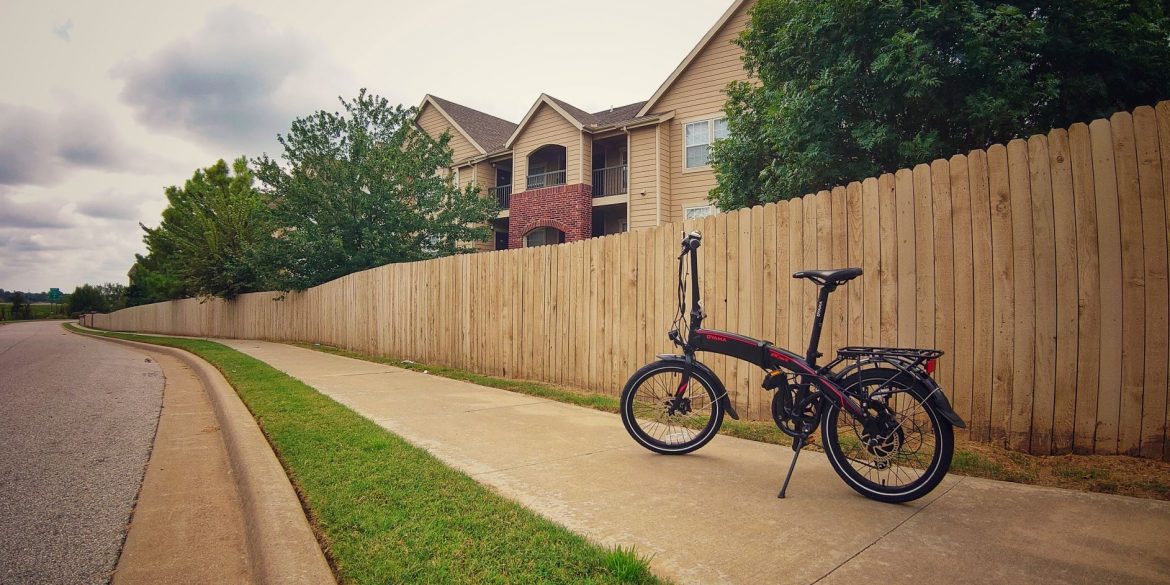 Cut me loose on a hike in the woods. Hand me a paddle and let me kayak the nearest river. Or throw me into the nearest lake or bathtub with a mask and snorkel, and I’m happy. But biking as a recreational activity never quite hooked me in the same emotional way that camping, paddling, or swimming does.

All of which is probably why I had no idea of the quantum leaps the bicycle industry has taken in just the last few years. I’ve been out of the loop, oblivious to the incredible folding bikes, electric bikes, and folding electric bikes on the market.

So, when Oyama asked me to check out their CX E8D Series II Folding Bike, my initial response was a shoulder shrug. I was a little curious, but again, I’m not really a bike guy. What convinced me, however, was the bike’s potential versatility and usefulness for road trips.

I think back on our recent drive along the U.S. East Coast, when we overnighted in tiny houses, campgrounds, and Airbnbs. To be able to park the truck in one place for a few days and explore the surrounding area on two wheels would have been a real treat. Plus, beyond the convenience factor, it would’ve been fun and a helluva lot more eco-conscious.

For the last few weeks, I put the CX E8D Series II to the test around Vagabondish HQ. If you’re not into reading, the short version is: I’m hooked. It’s way, way better, cooler, and more useful that I imagined. If you are into reading — particularly verbose, 1,000-word reviews about origami-inspired electric bicycles — read on …

… original CX E8D model to the next level with upgraded components that provide a refined riding experience.

Riders will get the pedal assist they need to get where they want to go with this electric bicycle’s 350-watt hub drive motor, torque sensor, hydraulic disc brakes, and illuminated LCD display.

Folding bikes, in general, are incredibly versatile. Commuters, travelers, apartment dwellers, kids — just about anyone really — can find a use for one.

For my purposes, however, a folding electric bike is incredibly useful for road tripping. Our Toyota 4Runner is a medium-sized SUV with a decent amount of room, but it’s not huge. So, when we’re road-tripping, space is at a premium. One bike (and definitely two) is never an option for us. We just don’t have the room. The Oyama CX E8D Series II changes all that.

Straight out of the box, I love the design. The matte black finish is cool, stealthy, modern — very Knight Rider-esque if The Hoff was brazen enough to ride a folding electric bike.

It’s difficult to tell from just the photos, but the finish has a high-end feel to it. Instead of just slapping clear coat or a layer of paint on it, it’s evident the design team put some thought into the aesthetic.

The engineering of Oyama’s CX E8D Series II is nothing short of amazing. When folded, the bike takes up next to no room in the back of our 4Runner. It’ll easily fit into the trunk of most standard sedans with plenty of room to spare. Folding the bike down is a three-step process that takes less than 20 seconds:

That’s it. With the battery, the bike weighs 37 pounds. That’s not exactly featherweight, but it does make it easy for the average person to load in and out of a vehicle.

Most folding bikes sacrifice comfort in favor of portability. Smaller seats, smaller tires, lightweight (in many cases, cheap plastic) components all help keep weight down. Oyama finds a good balance in the CX E8D Series II. Everything you’d expect to be metal is made of aluminum, so it’s lightweight and sturdy.

At 20 inches, the tires are a tad smaller than a traditional street cruiser (usually 24 or 26 inches). After five minutes in the saddle, however, I didn’t even notice. Overall, it rides like a typical street bike. Even after a few hours, it’s comfortable, smooth, and easy to control.

Take the battery out of the equation and everything so far makes this a great folding bike in its own right. Where the Oyama CX E8D Series II really shines — and the reason road trippers, RVers, va lifers are going to want one — is in the electric-assist motor.

The rear hub is powered by a 396-Wh battery. To put that in practical terms, the bike offers a maximum range of 40 miles. Ultimately, it depends on terrain, wind speed, how much you rely on it while riding, passenger weight, etc. For anyone looking to tool around their campground, make a quick grocery run down the street from their campsite, or explore the city for a day, it’s more than enough juice.

Power is regulated through a digital controller with a basic screen mounted on the handlebars. Eight speeds provide for a highly customizable ride that’s as tame (or not) as you want it to be. Based on the power setting and how hard you’re peddling, the bike intelligently senses how much assistance you want.

At the lowest setting (1), the electric assist is non-existent. At the highest level (8), the torque comes on smooth and strong. It’s never a sudden JOLT! of power, but rather a gradual increase as though a giant hand or a stiff wind is helping you forward. To be clear though, at max power on level ground, I’m easily able to push the CX E8D Series II close to 30 miles per hour without trying too hard. This thing seriously moves when you need it to. And the hydraulic disc brakes help you stop on a dime before things get too out of control.

The Oyama CX E8D Series II folding electric bike is now available with a retail price of USD $1,999. That’s certainly not cheap. But, if you’re reading this review, you probably already know that folding bikes, in general, and folding electric bikes, in particular, rarely are. Compared to its competitors, this bike is an incredible value at that price.

The list of available colors is short. As Henry Ford was fond of saying, “You can have any color you want, as long as it’s black.” But, honestly, the matte black is so damn cool, why would you want any other color?

The folks at NYCeWheels did a great five-minute review of the Oyama CX E8D Series II. So, you can judge for yourself whether it is indeed the best folding electric bike for travel.