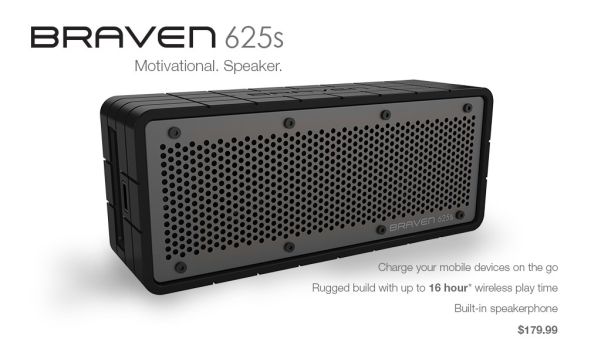 The Braven 625s Bluetooth Speaker: I Can’t Kill It

Three years of testing Bluetooth speakers has set the bar to impress me rather high. I’ve played with the Jawbone Jambox, I’ve tested a few models of Devotec’s Solar Sound and I’ve even rocked out to the Supertooth Disco. All of those were fine portable speakers, with their own strengths and weaknesses. But none of them came close to impressing me as much as Braven’s 625s.

When I’m working on a review, my first goal is to seek out potential “problem areas” to warn my readers about – things likely to break or fail in the course of normal use. There’s virtually always something that sets off alarm bells in my head. But not with these speakers. I’d go so far as to say they’re as close to indestructible as it gets. And believe me, I tried hard to destruct them. Watch this video and keep in mind that it was like, our fourth take.

What’s more, earlier that day I set my Bravens up on the edge of my bathroom sink, so I could rock out while I washed off. They ended up falling in and getting dripped on for a solid ten minutes. When I recovered them, the entire top was covered in a thin standing layer of water and the bottom was soaked as well. The 625s didn’t even seem to notice.

The sound quality may be a hair inferior to the Supertooth Disco, but to my ear they are very close. And the Braven 625s is loud. Startlingly so, considering its small size. It can fill the air to a satisfying volume in large rooms, and could even be deafening in a small cupboard-like, one bed hostel room. But that aforementioned tiny profile means you can fit it in a side jacket pocket or a backpack with no issue.

Hikers will be happy to know that these speakers only weigh about 12 ounces. And the 625s is a multi-use gadget, capable of acting as a mobile battery to your phone (or whatever). The folks at Braven were kind enough to include a USB LED light, which actually works when plugged into any USB power source. It was clearly made as an afterthought (and isn’t nearly as tough as the speakers) but still a nice touch.

The Braven 625s retails for $179.99. If you want tough, lightweight speakers with long battery life and a loud voice, I heartily recommend a “buy”.