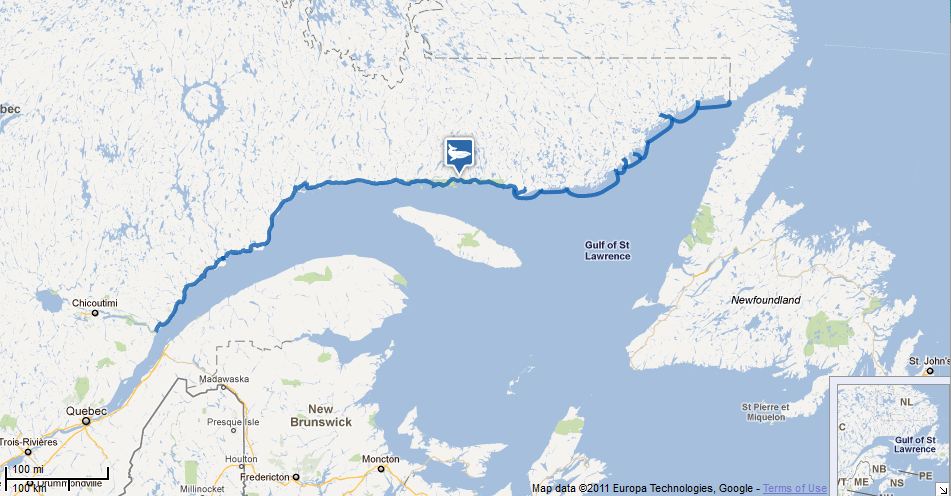 After two days of hiking and exploring Quebec’s La Mauricie National Park, I quickly discovered that the province has plenty of stunning natural scenery to offer. My brief time in the park had quickly come to an end however. And it was now on to Saguenay-St. Lawrence Marine Park for two nights of beach camping, whale watching, kayaking and various other uniquely Quebecois activities. 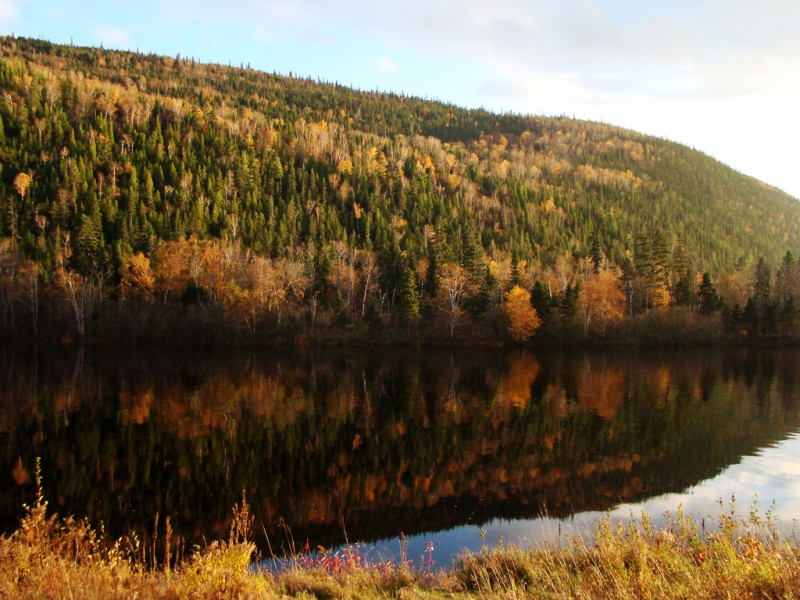 The small village of Tadoussac sits at the heart of the Marine Park, on the banks of the spectacular Saguenay Fjord. Trivial Pursuit fans might be keen to learn the town’s namesake means “udders” or “breasts”. Although, “according to other interpretations, it could also mean “place of lobsters”, “place where the ice is broken” (from the Montagnais shashuko), or “among the rocks” (via). So … who knows? 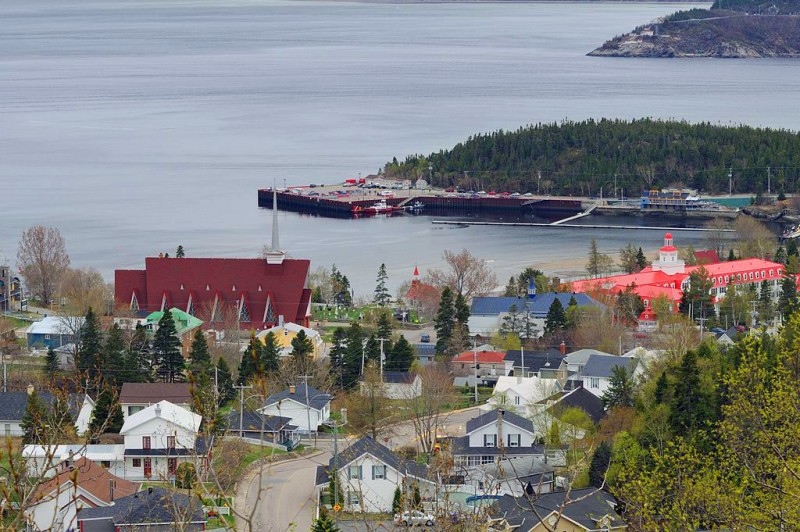 That silly bit of trivia aside, it’s actually the oldest continuously inhabited European settlement in Quebec, and the oldest surviving French settlement in the Americas. If I thought my visit to Quebec (the city, not the province) was a trip back in time, this sleepy seaside town is in a league of its own. 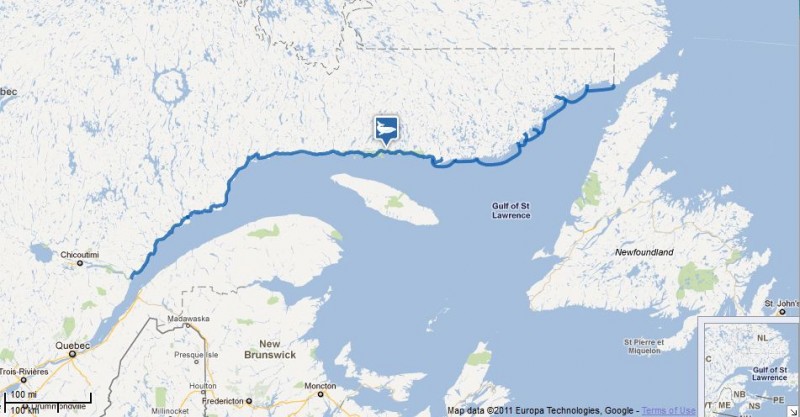 Nearing Tadoussac by car, signage marks the section of Route 138 as Route des Baleines or “Whale Route”. And with good reason: this 560-mile long trail is the seasonal home to one of the densest whale populations on the planet. Every building along the way is either a house or a business dedicated to the facilitation of whale watching in some fashion – cruise lines, ticket vendors, kayak rentals and the like. BonjourQuebec.com notes:

As you travel along the Whale Route, you’ll be dazzled by the sights: the St. Lawrence River, wilderness forests, bays and fine sandy beaches. During your stops, you’ll be able to see whales from observation spots set up for this purpose, like the one at Sainte-Anne-de-Portneuf. Then again, you could see some by chance as you take a break at a pier, a roadside rest area or a campground.

They take their whales seriously up here and I can’t say I blame them. More than once, I nearly careened into oncoming traffic while craning my neck in search of whales just beyond the steel highway barriers. Such is the allure of the world’s largest mammals.

My first stop is the Marine Environment Discovery Centre. It proves to be the perfect appetizer for anyone looking to spend a day or two exploring the region in depth. For armchair marine biologists (as I once was as a young vagabond), this place is pure heaven. Its many rooms offer maps, charts, hands-on displays, themed viewing rooms and more to learn all about the vast array of marine wildlife in the area. 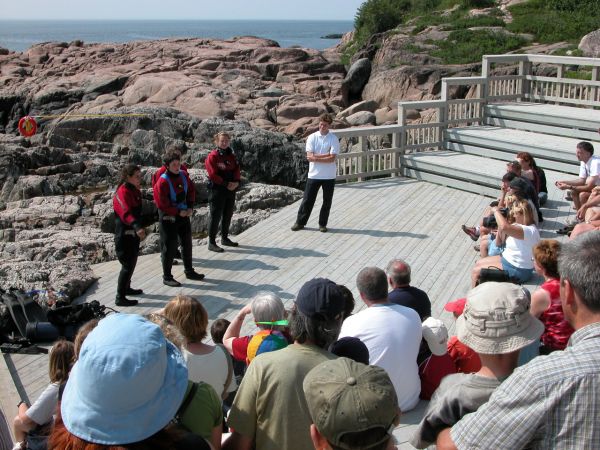 One of the coolest exhibits allows visitors to sit in a viewing room and participate in an actual dive. The Centre’s dive team dons HD video cameras and high tech masks with integrated audio systems to interact with visitors in the viewing room in real time. The setup allows the audience to ask questions of the divers, make suggestions on which marine life to see and touch and feel like they’re actually on the dive themselves.

The Centre is also a fully licensed scuba diving facility with access to some of the most amazing wall diving in eastern Canada. It’s also among the coldest. Even as a certified diver, I opted to avoid the inevitable “shrinkage” this time around in favor of some of Canada’s best whale watching. Topside.

Next stop: Cap-de-Bon-Desir – described as “a magnificent natural headland that is ideal for observing marine mammals”. Indeed. 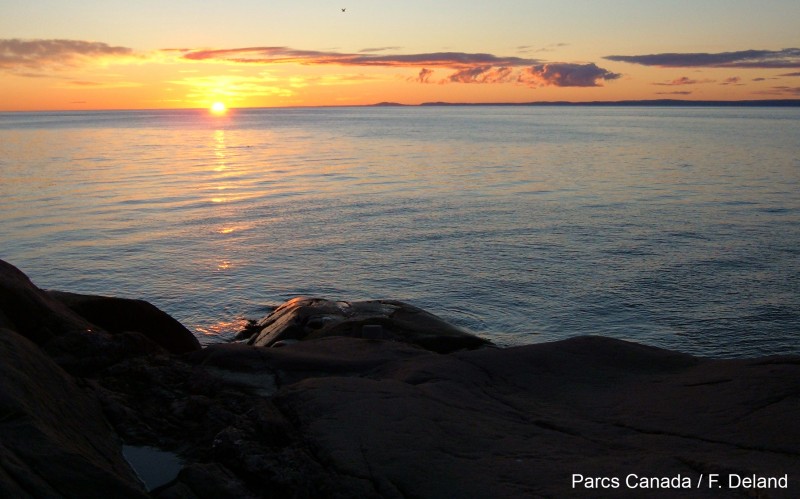 As I learned last year on my polar bear expedition to Churchill, sometimes nature doesn’t want to cooperate. Sometimes she requires you to wait (and wait … and wait).

Not so at Cap-de-Bon-Desir. Thirty seconds after setting foot on a rocky outcrop overlooking the river, a handful of minke whales emerged a mere 100 yards from shore. The gleeful giggle I unintentionally uttered surprised me more than it did my Parks guide. 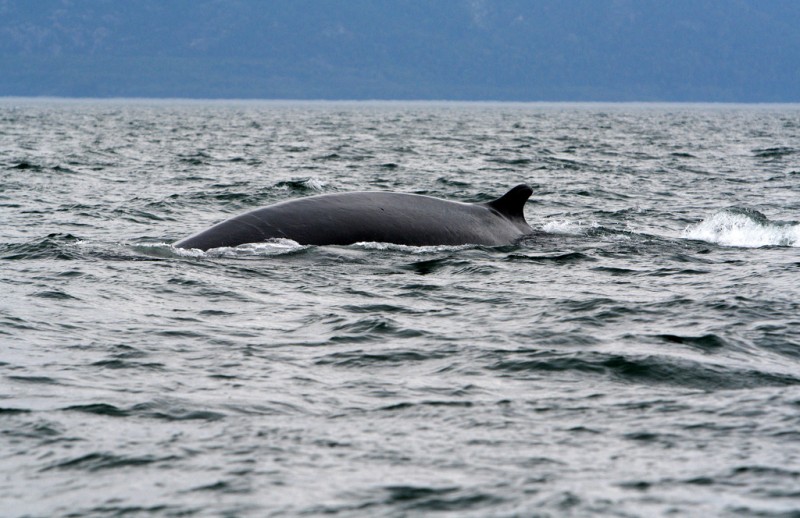 I’m loathe to carelessly toss out superlatives, but it’s hard not to in the wake of such majestic and massive creatures. The experience is (quite literally) awe-inspiring, jaw-dropping, breathtaking … what am I leaving out? Perhaps more than anything: it’s humbling.

Chasing Whales and Rainbows Down the St. Lawrence River

Cap-de-Bon-Desir wet my whale watching whistle for sure. But my Parks guide was not content to merely point at them from shore. So she took me on a “proper” whale watch in a Zodiac. The only way to get closer to them is via kayak or literally climbing into the water alongside them. Given that it was too cold for either of those options, we opted for a boat ride down the St. Lawrence. 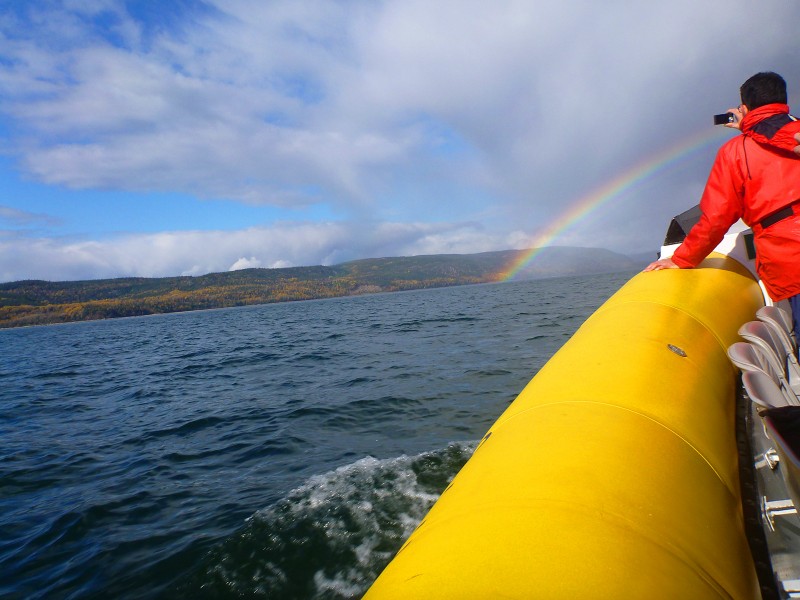 While the whales at Cap-de-Bon-Desir were plentiful and the “watching” easy, out on the river, they proved a bit more elusive. Most tour operators assure passengers 2-3 hours on the water (this varies company to company, and day to day). After a full hour of searching on the water, we had only chalked up a few minke whale sightings in the distance. But patience is truly a virtue when searching for wildlife and our captain remained undeterred.

While I’d learned not to get my hopes up, it was a bit hard not to after a hundred miles of “Route de Baleines” street signs and listening to my Parks guide regale me with tales of just how many whales are in this region at any given time. Minutes later, they were surfacing on all sides – minke whales, fin whales, seals, oh my! It was as though someone flipped the “Let’s Make the Tourists Happy” Switch.

And it worked. For the next hour, we watched as we were surrounded on all sides by marine mammals of every stripe. While the phrase “experience of a lifetime” is too often bandied about, I can say without an ounce of hyperbole that witnessing such beautiful animals as these from mere yards away is truly worthy of the description.

(No) Room With a View: Beach Camping at Mer et Monde

Let’s get this out of the way: if there’s a more beautiful, more breathtaking, more amazing campground in the whole of North America than Mer et Monde, I’m unaware of it. And if you know of one, please e-mail me. 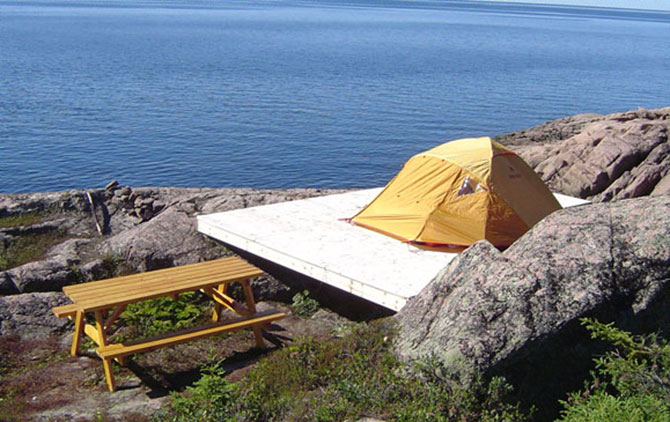 At the end of an unassuming dirt road, this seaside campground features 25 campsites and tent platforms with a spectacular view that overlooks the St. Lawrence River and much of the Marine Park. The site is far enough from the road that visitors are guaranteed only to hear the crashing of the water below and the myriad birds that occupy the grounds. In high season, campers awaken to the sounds of whales breaching literally feet from the shoreline.

Unfortunately and fortunately, I visited at season’s end, one week after their official closing. Unfortunately, this meant that I had to miss my anticipated kayaking trek due to the brutal cold out on the water (the air and water are both just a few ticks above freezing). Fortunately, that also meant that I had the entire grounds to myself. The pure darkness and silence assured me two of the best nights sleep I’ve had in a long, long time.

The season is short (mid-May to mid-October) and tent sites fill up quickly. So if you’re planning a visit, my advice is to act fast.

And tell ’em Vagabondish.com sent you. (On second thought, don’t do that. That’s never gotten anyone anywhere …)

At sunrise on my final morning on the grounds, I awoke to this: 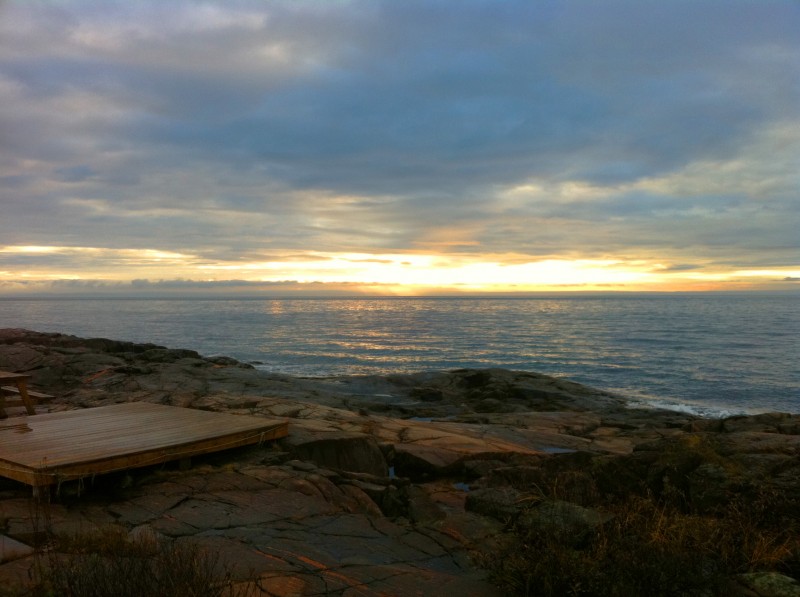 A truly amazing site to behold. Bittersweet however, as the timing also meant that I had to leave early to press on towards Sept-Iles and Mingan Archipelago. The latter promised to be the wildest of all of Quebec’s National Parks.

Oh, and if you haven’t already, enter to win your own all-expenses paid Canadian journey! Choose from three itineraries, including:

The choice is yours and the sweepstakes is open from now until December 15, 2011!

It takes less than thirty seconds to enter, so ”¦ seriously ”¦ why are you still reading this?