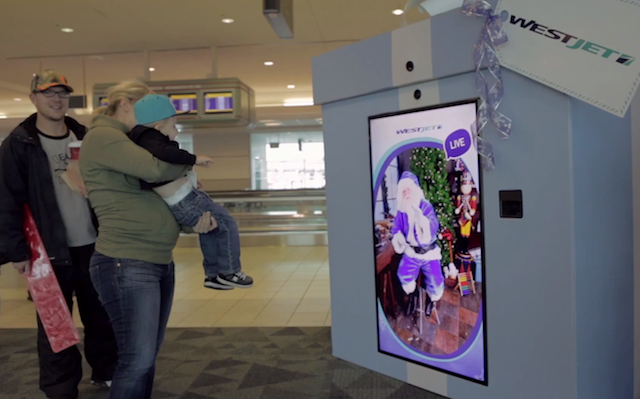 Canadian airline WestJet’s latest feel-good publicity stunt has blown across the internet like a blizzard.

Though the word “miracle” is being bandied about rather haphazardly here, there’s no doubt that the Christmas spirit is alive and well at WestJet.

The airline set up an interactive digital santa at airports in Toronto and Hamilton, where passengers about to board two flights were asked to scan their boarding passes and young and old alike talked to Santa Claus about what they wanted for Christmas.

While the flights were in the air, WestJet employees volunteered their time to race around procuring the items required to fulfil all of the passengers’ wishes, which ranged from mundane sundries like new socks and underwear, to luxuries such as a big screen television and airline tickets.

When passengers arrived at the baggage carousel in Calgary to collect their bags, they were beyond surprised when the carousel started up and wrapped presents came out of the chute instead of suitcases and they discovered that their wishes had been granted.

The heartwarming stunt also served as a valuable lesson in the importance of dreaming big. Everyone’s talking about the guy who got socks and underwear.