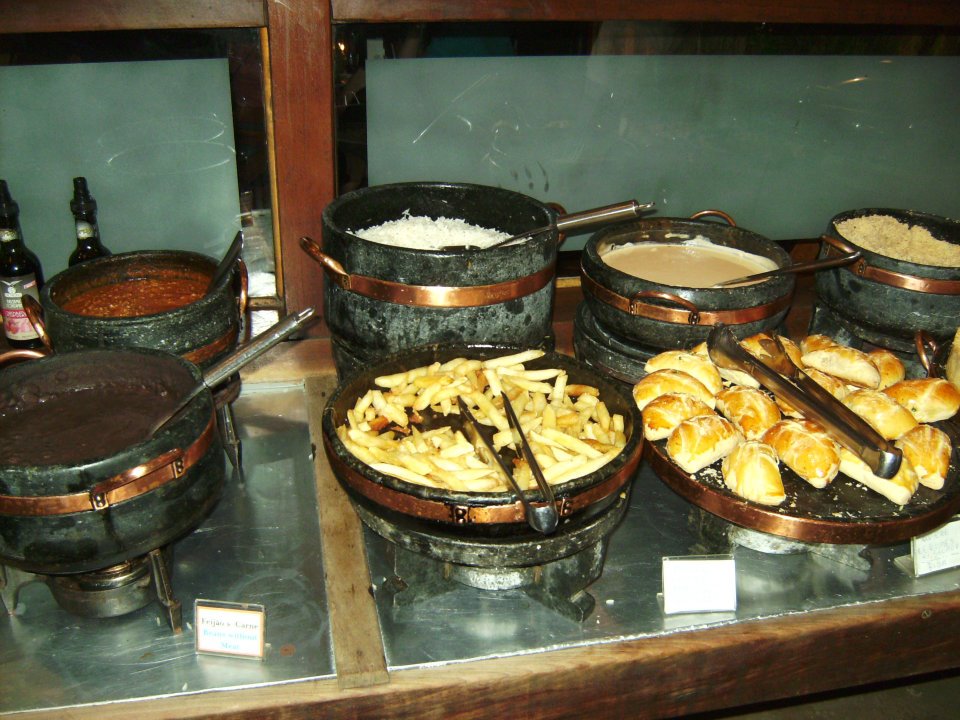 The Taste of Love: Traveling with a Vegetarian in Brazil

Everyone makes sacrifices for love. And when I spent a month in meat-loving Brazil with my vegetarian boyfriend, my sacrifice happened three times a day: breakfast, lunch, and dinner.

Brazil is paradise for two-footed carnivores: the serving sizes are gut-stretching and nearly every dish features something that was recently alive. There is no way I (or any mere mortal) could ever eat a full Brazilian meal””they’re designed to fill two (or three … or four) people. And even if I wanted to plow ambitiously mouth-first into a massive mound of meaty delight, I could never afford it.

Because Brazil is expensive. According to an Economist article about the Big Mac Index, where the price of McDonald’s Big Macs across the globe are analyzed and compared, the Brazilian real was the most overvalued currency in 2011. I’m sure this means something significant on a global economic scale, but for me it just meant everything in Brazil cost more than I wanted to pay for it. Although using the Big Mac Index to examine purchasing power around the globe has its flaws, let’s stick with burgernomics for the moment. In the United States, a McDonald’s Big Mac costs $4.07. In Brazil it costs $6.16””over 2 dollars more. In Peru, where I’ve lived for the past two years, the same burger is a mere $3.65, according to the 2011 Big Max Index (while according to my wallet after a 2 a.m. slightly-sober fast food stop the other night, the 2012 on-the-ground price is even cheaper). In fact, the only countries with Big Mac prices more supersized than Brazil’s are Norway, Sweden, and Switzerland.

If that’s the markup for fast food, just imagine the prices at a proper sit-down restaurant. For the average backpacker, the overwhelming combination of size and price of Brazilian meals can only be overcome by splitting the dish, as well as the check.

Dealing with the Veggie Situation

But traveling with a life-long vegetarian throws a wrench in that plan, and my tendency to linger and salivate in front of churrascarias””Brazilian steakhouses that smell of heaven””while also bemoaning the exchange rate wasn’t appreciated and did not result in the desired steak-based meal.

So for a while, we ate a lot of pizza. Pizza, as far as I can tell, is as beloved in Brazil as everywhere else in the world””although the locals seem to scorn those who order it plain (no expensive or meaty toppings) and then ask for chili pepper or tobacco sauce for seasoning.

We also kept full by filling our pockets with extra pieces of bread and cheese from breakfast (expertly wrapped in napkins and slipped away when no one was looking). And I must admit, Brazilian breakfast is a quite enjoyable affair. Most pousadas provide a generous breakfast spread of fruit, juice, bread, cheese, and sliced meats (as well as a suspicious dish that looks like sliced hot dogs swimming in tomato sauce, which we both avoided).

But the grilled meats beckoned and the small and affordable beef-filled empadinhas weren’t cutting my mid-day carnivorous cravings.

Then we made a discovery. 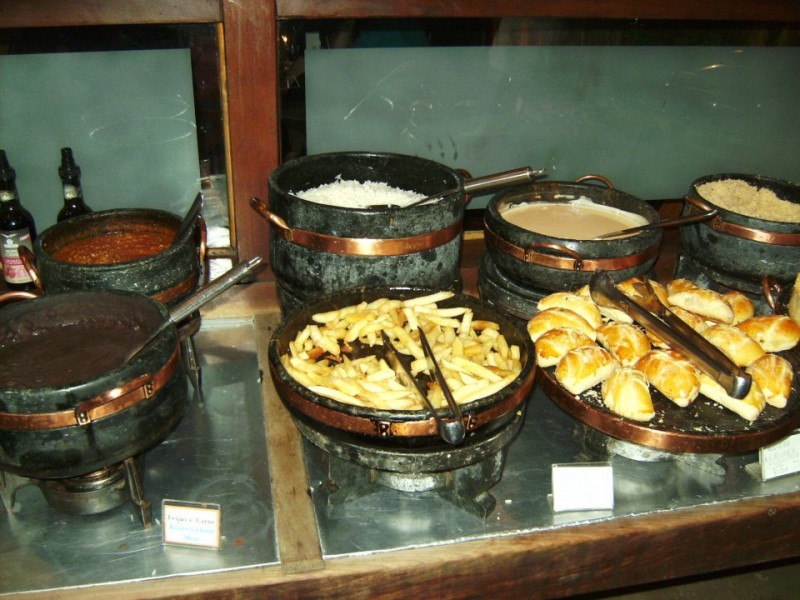 The Glory of the Brazilian Buffet

The savior of my meat-crazed desires was Brazil’s ingenious take on the cafeteria-style buffet. Por-kilo restaurants are exactly what you’d imagine: restaurants that sell food according to weight. This is by far the best value dining option in Brazil. Prices are usually specified per 100 grams, and if you’re smart with your selections you can eat a fairly filling meal for 8-12 reals, about $6 USD (the price of a Brazilian Big Mac).

The system is simple and ideal, particularly if your Portuguese is lacking (or in my case, non-existent). You grab a plate, pile on what you want, and then put it all on a scale. A worker provides a receipt or ticket number and you’re free to eat, repeating the process until full. You pay when you leave.

A relative of the por-kilo is the buffet with a set price. These hole-in-the-wall restaurants cater to the working man, offering low prices and lots of staple items. By far the best one we taste tested was just outside of Curitiba’s bus station. Attracted by a colorful chalkboard boasting a meal for 9 reals, we were dazzled to discover our money would not only buy us repeated access to a buffet of salads, fried vegetables, rice, beans, and potatoes, but also our choice of meat, chosen from a lengthy list of options.

I obviously took the liberty of ordering both of our meat dishes and glutinously tried to eat two generous portions myself, along with a packed plate from the buffet. I managed to down an entire steak covered with caramelized onions and a fried egg, and made a respectable dent in a stewed serving of thick pork. Both, however, were less than half the size of a dish served at a typical sit-down Brazilian restaurant.

That night, as I snuggled up on a 13-hour bus ride from Curitiba to Rio de Janeiro, I rubbed my steak-filled stomach with contentment, glanced happily at all the money still in my wallet, and gave my significant other a greasy, oniony peck on the lips. Love, along with a well-cooked steak and beautiful Brazilian scenery, really can conquer all.