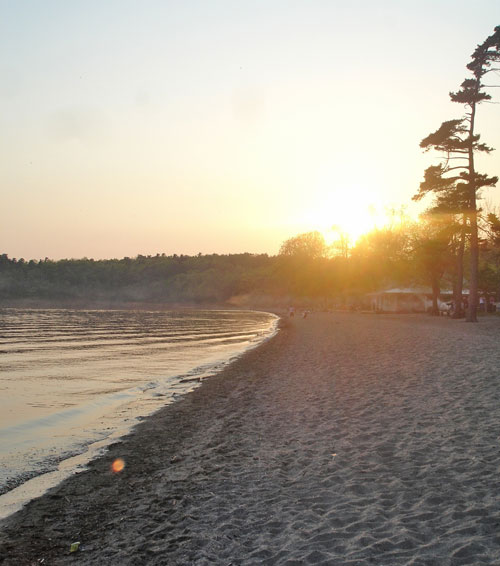 The following events transpired on Thursday, May 24, 2007.

Oddly enough, in all the times I’ve made the trek from Rhode Island to Montreal, I’ve never actually stopped in Burlington, Vermont. This was no conscious decision on my part. Perhaps it was the victim of time constraints or just never taking the time to look at a map or … well I’m not really sure.

But having talked about the small Vermont city with a few friends who’d partaken in higher education and … [ahem] higher education there, it peaked my curiosity. So this time around, K and I decided it was a perfect stopping point on our way up to the land of moose and hockey (no, I don’t really believe that stereotype about Canada. I know they have maple syrup there too).

Burlington is a little more than half way between Rhode Island and Montreal. And it’s what you might expect of a small New England city – in the same vein as Portland, Maine or Portsmouth, New Hampshire. It’s quaint and easily walkable. The nearby lake brings a cool, crispness to the air. The streets are rife with lifelong hippies and vagabonds, and young, liberal, free-spirited college co-eds eager to become either.

As luck would have it, we pulled into town about an hour before sunset. Our even better luck was staying at North Beach – a public campground that sits squarely on Lake Champlain. After a little maneuvering through town, we followed the signs and paid our $23 all-in for our own private site. They even offer fi’ty cent showers if you’re interested! 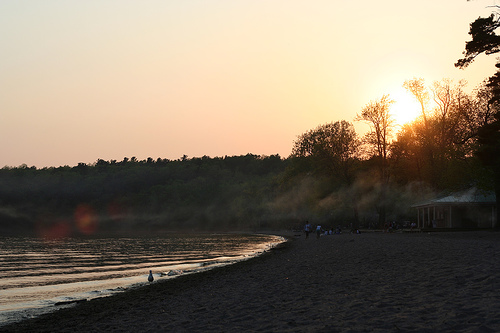 We sat on the beach for half an hour watching the sun go down and snapping photos like we were going to the electric chair and these were the last memories we’d ever have together. Oddly enough, neither of us could get comfortable. We couldn’t sit still. K works and goes to school nearly seven days a week with the rare exception of a few scattered weekends off; I, the same, minus the schooling. It wasn’t until the following day that either of started winding down and settling in to the care- and routine-free ways of vacation.

It’s immediately obvious that Church Street is Burlington’s epicenter and with only one night in town, we knew it’d provide more than enough to see and do. It was bustling with wide-eyed, Birkenstock-laden potheads college kids when we first drove by before sunset. And even more so when we returned an hour later.

We ducked into Rusty Scuffer first for dinner. It immediately feels like a strange, members-only dive – like an odd cross between an Elks Lodge and the galley of a ship owned by a rabid sports fan hell-bent on snatching up every piece of sports memorabilia from the last half-century. It’s clearly one of the oldest bars on the strip. And while that’s a nice badge of honor, it doesn’t mean the proprietors should simply rest on their laurels. We came for dinner, but only stayed for soup and a beer. 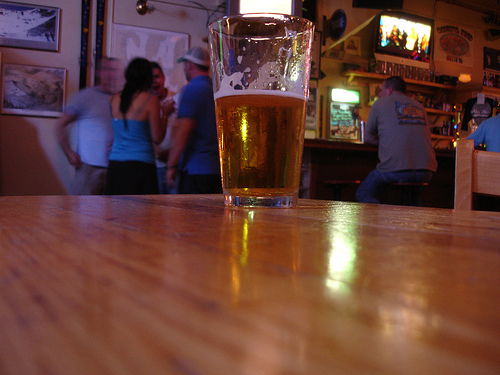 After an hour or so of strolling around, people watching and being not particularly hungry anymore, we decided Ben & Jerry’s sounded like a better option for “dinner”. It is Vermont, after all! Even though it was after 10:30 at night, the line was out the door. And no one seemed particularly worried how long it was going to take. We all came from Ben & Jerry’s ice cream and, by god, if the world were burning down around us, we were going to get Ben & Jerry’s. I don’t even remember what I ordered, but I think it had fudge and coffee and mango and bits of snozberries and … It doesn’t really matter. It’s all just so damn good!

We grabbed one last beer at the Red Square Bar & Grill and called it an early night. Montreal loomed less than a couple hours and two hundred miles on the horizon. And after six or so hours in the car, neither of us felt particularly energetic.