As I approached the entrance of St. Peter’s Basilica towards the stony faces of the Swiss Guard, I stopped for a moment, hesitating. This couldn’t be the place.

Behind the Guards, there were no signs. No crowds. No indication that only a couple of feet nearby lay the underground entrance to the Vatican’s Necropolis. And yet it was.

Each year millions flock to the Vatican, making a pilgrimage to its holy relics or simply to immerse themselves in one of the world’s oldest cultures. Despite being one of the holiest and best-preserved sites in Rome, the complex underground necropolis of the Vatican goes largely unnoticed by visitors. In fact, only two hundred people a day visit this labyrinth of opulent Roman mausoleums, built into the very foundations of the current Basilica.

With the chance to view these up close and even visit the original tomb of Saint Peter, I decided to make a pilgrimage of my own. My pass in hand, I abandoned the crowds and souvenir touts buzzing behind me and meekly confronted the guards.

Beneath the modern-day Basilica of St. Peter lies an even older one, built by the emperor Constantine. After Peter’s crucifixion on Nero’s circus obelisk, which can still be seen today as the obelisk that sits in the middle of St. Peter’s Basilica, his body was secretly moved to a grave in a pagan cemetery. After Constantine’s victory in 312 A.D., he had a basilica built in honour of St. Peter over the pagan cemetery. After its initial discovery and excavation in 1939-50, it remains one of the best-preserved sites for understanding Roman belief, and allowing an insight into early Christianity. Given the importance of the site, and to protect its excellent state, the Vatican maintains a strict limit on the number of visitors, making this hallowed ground one of the most exclusive destinations in Rome.

After being guided around the arched corner towards the Scavi office by the Guards, I stood near a modest-looking door, waiting for the guide. Soon she appeared and after a brief introduction, led us all through the modest door and down a narrow tunnel, with the sunlight diminishing with each step. Each step took us 1,600 years into the past and ever closer to the original Vatican Hill, into something completely unexpected.

Instead of the grand columns and large stretches of marble usually associated with Roman sites, the area that filled my eyes was a series of narrow passageways, all constructed of neat red bricks. The air was humid but dry, and a heavy scent of age lingered thickly in the air. Several sarcophagi, built of sturdy stone and covered in richly elaborate engravings, were casually assembled near the entrance. After a brief description of these sarcophagi, our guide gestured towards the main passageway, deeper into this city of the dead.

As we ventured further into the corridor, with dim spotlights being the only source of light to distinguish our pathway, the sites grew more grandiose with each step. My guide stopped and motioned towards one of the rooms on the right. Inside was a large room – a mausoleum for several generations of one family. The walls were painted, still perfectly preserved, with motifs of stags and vases along the top.

A couple of steps brought us to the mausoleum of Lucius Tullius Zethus, opulently painted with charioteers and a detailed mosaic floor of twisting vine leaves. Our guide beckoned us closer, and pointed to the corners of the mosaic. Eight holes carved out a space in the corners of the mosaic, where their families poured into offerings of food during the annual funeral rites, in hopes the deceased family member would be appeased and not haunt them.

It became more and more apparent, after following the street at length and glimpsing at several family mausoleums, that each one had an individual quirk. The mausoleum of the Aelii had an alabaster vase with Gorgon’s head, in order to ward off evil spirits whilst the couple Marcus Caetennius Antigonus and Tulia Secunda had a funeral altar commissioned to share with each other. Likewise, although each mausoleum was laid out in a sumptuous décor, every painting or mosaic was unique to that particular mausoleum.

Mausoleum of the Valeri © Vatican.va

The corridor narrowed at length, the brick walls showing signs of deterioration and closing ever more around us. The air felt clammy to the skin and damp in breath. As we drifted into these surroundings, becoming smaller against the backdrop of the walls, these houses of the dead only grew grander. The darkness muffled each step, every breath, and in the disconcerting silence, every sound was hushed. It seemed in the midst of this atmosphere everyone was hoping to catch the sound of one of these ancestors. Perhaps this is because that in the material remnants of their afterlife, it was still possible to see them alive – their relationships on detailed carvings, the values and desires most dear to them painted on walls, the offerings of food, their delicate features carved on busts. It was easy to see as the Romans did that although their ancestors’ bodies died long ago, part of them continued to live.

As our guide brought us around a constricted corner, the Necropolis grew in age. The once tidy red bricks now mixed with earthen stone, and the mausoleums shrank in size and conservation. Around the corner was the mausoleum of the Iulii, the only Christian mausoleum in the necropolis. However, any thoughts we had of traditional Christian images were thrown out, as our guide warned us.

“Up in the corner, you will see Christ depicted as a Sun god,” she said motioning to a painting of Christ on a chariot, sun rays emanating from his head, “and the mosaic of the fisherman casting his hook is an allusion to the fisherman of souls.” This blend of Christian and pagan images continued as she led us to the next mausoleum, where a picture of the Cup of Sacrifice was carved into a cinerarium.

Continuing down the claustrophobic corner, one at a time, the rooms became more decrepit. Under the faint greenish light, it was possible to gain a small glimpse of the rooms, despite the intrusion of the modern basilica’s foundations. Abruptly our guide stopped in a small clearing. To her left a misshapen opening gaped in the wall, and a small flight of stairs lay behind her. The walls surrounding us were flaked and uneven, and a solitary sarcophagus stood behind us.

“Directly above us,” she spoke, in a lilting accent, “is Bernini’s baldachin, the foundations of which we just saw.” Then she motioned towards that innocuous hole and drew closer. Pointing through it towards a distant wall, she showed us a glimpse of where Saint Peter was originally buried. Disguised by the dark shadows and hidden between rectangular blocks of stone, it was just possible to make out a small repository.

We proceeded to walk up the Clivus, a narrow passageway of steps leading to the tomb of St. Peter. Faded red bricked mixed with ancient stone, and a large red wall, painted for the original tomb of St. Peter, stood as a startling contrast to its surroundings. Continuing up a flight of narrow stairs, we left the necropolis and entered Constantine’s Basilica.

After the fall of Rome and the sacking of the Saracens, Constantine’s Basilica fell into a state of disrepair and was consequently destroyed and replaced with the modern one as seen today. Standing in the ruins, it was hard to imagine this small dank room being a heralded site for early Christians. The bricks here were faded brown with age, the dimmed lights barely casting enough for a shadowed glimpse. Our guide led us further into a small, rectangular darkened room, with barely enough space to hold us all in.

“Directly above us,” she said softly, “lays the Confession of the modern Basilica, and in this very tomb lies the remains of St. Peter,” gesturing to the collection of rubble behind her. Gazing around the room, I was taken aback by its general simplicity. After touring around all the grandiose mausoleums below us, this simple tomb, dug out of the ground and laid with simple brick, with small columns from the original shrine resting on top, seemed an unlikely spot for one of the founders of Christianity to rest.

When the tomb was first uncovered, many burials, nameless, we situated around St. Peter’s burial. Years later, analysis of the bones inside his resting place were revealed to be from four individuals and several farmyard animals, none of which could possibly be Peter.

Our guide’s voice softened, her eyes glassy with emotion.

For years after, many people believed his remains were lost, until a professor by the name of Dr. Margherita Guarducci made a bold discovery. A small box of bones, removed without any of the archaeologists’ knowledge, was originally discovered in this secret niche between the ”˜Red Wall’ and a wall covered in graffiti, mainly inscriptions of prayers and denoting Peter’s presence.

She pointed to a small crevasse in the rubble, barely noticeable, where a small box was situated.

Tests of the bones in the box showed they were of a 60-70 year old man of robust build, the same age as Peter when he was crucified. The bones were wrapped in a purple and gold cloth, signifying someone important was buried in that box, and analysis of the soil in the bones showed they had first been buried, near where Peter was believed to have been initially laid to rest. And inside the niche where the box was found were the words ”˜Petros Eni’ which in ancient Greek mean ”˜Peter is buried here’.

Slowly, we bowed our heads in prayer; each lost in their own thoughts and choked with emotion. Echoes of prayers spoken long ago reverberated in the silence of this consecrated room. It was easy to see that we were not so different from those first pilgrims that ventured into this room.

At length, our guide broke the silence and we quietly continued towards the Clementine Chapel. Reconstructed to resemble the Constantinium memorial, deep-hued marble decorated its walls and the golden wrought iron hid the ”˜Confessio Petri’. Around the corner, in a small opening was the Graffiti Wall, its surface covered in scrawls of prayers and Christian symbols. As we headed towards the exit, our guide mentioned if we went around the guards, we could jump the queues and have free access to see the modern St. Peter’s Basilica, as well as the Tomb of the Popes. 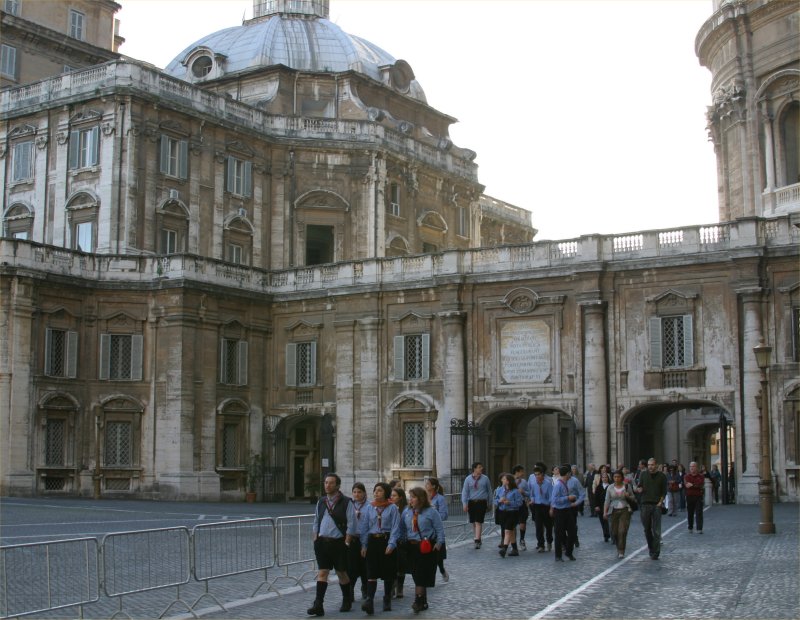 Stepping out into the sunlight and away from the solemn peacefulness of the necropolis, I was struck by the wave of noise from the crowds and their frenzied energy. As I made my way towards the modern Basilica, I couldn’t help but think that despite the overwhelming number of churches in Rome and the grandeur of the Vatican, a small, simple brick room beneath the foundations of the Vatican held more reverence and sanctity than any of the others.