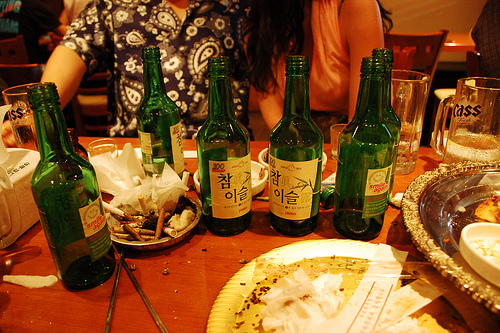 The Art of Getting Sloshed: The Finer Points of Korea’s Drinking Culture

There is no bar time in Seoul. Evenings tumble forth endlessly in the city while citizens enjoy copious amounts of beer and soju — or, more recently, wine and cocktails. From the late-night alleyway restaurants to the posh clubs of the Apgu district, drunken nights are part of the culture: they seal business deals, solidify friendships, and leave you with the kind of memories you hope won’t be forgotten in the morning.

But for all that drinking is in South Korea, it isn’t sloppy. There are rules to be observed, which, if broken, will put you on the wrong side of Korean notions about respect — or at least get you funny looks. Here’s a guide to help you navigate the blurry world of Korean drinking culture:

#1. Never Pour Your Own Drink

Pouring another’s drink is seen as a gesture of respect, a display of jung: an indefinable word that floats close to meanings like “affinity,” “affection” and “friendship.” Friends fill your shot glass to the brim out of jung. They urge you to chug it down for the same reason. Pouring your own drink can be seen as a rejection of this, a symbol of aloofness or indifference — the reasons not to do so are obvious.

Despite changing societal roles in South Korea, the age hierarchy remains a solid legacy of Confucianism. Koreans are expected to follow what their elders tell them; this applies in most things and certainly in drinking. So if you’re out to dinner with an ajuhshi–older man–who likes the sauce, be prepared for a rough night. This holds true for people even a few years your senior, of either gender.

In line with numbers 1 & 2, there is a right way to hold your glass when an elder is pouring for you. Hold the cup out with one hand, and with the other hold your wrist. I’ve heard this is a practice that carried over from a time when Koreans wore traditional hanbok, which had long, draping sleeves that needed to be held out of the way.

When pouring for elders, hold the bottle in the same fashion. 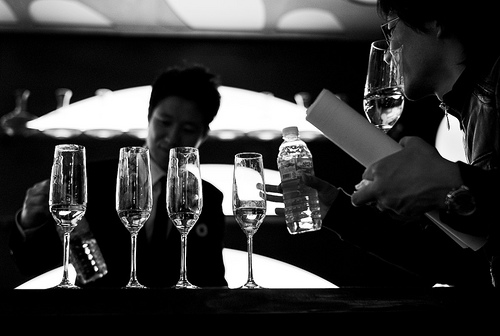 A typical night out in South Korea puts the American notion of “bar hopping” to shame. After dinner (which will certainly involve a few drinks, at least) you can expect to bounce to three or four (or seven) more bars, usually culminating in a spectacularly drunken session at noraebang — literally “singing room,” or karaoke.

Each bar stop is called cha, or “car.” So now when your friends ask, “Want to go to the second car?” (“ee-cha kal-ka?”), you know what you’re getting into.

Korean men make some form of this guttural sound after every time they take a shot. Supposedly it eases the burn — try it for yourself.

Above all else, always remember that you’re a guest in the country, and that whether you know it or not you’re also serving as an unofficial representative for your nation. Getting sloshed in South Korea is all well and good, but just don’t be ‘that guy’ — the one who parades obnoxiously through the streets, shouting the few butchered Korean phrases he knows. The country’s got enough American G.I’s who do that already.