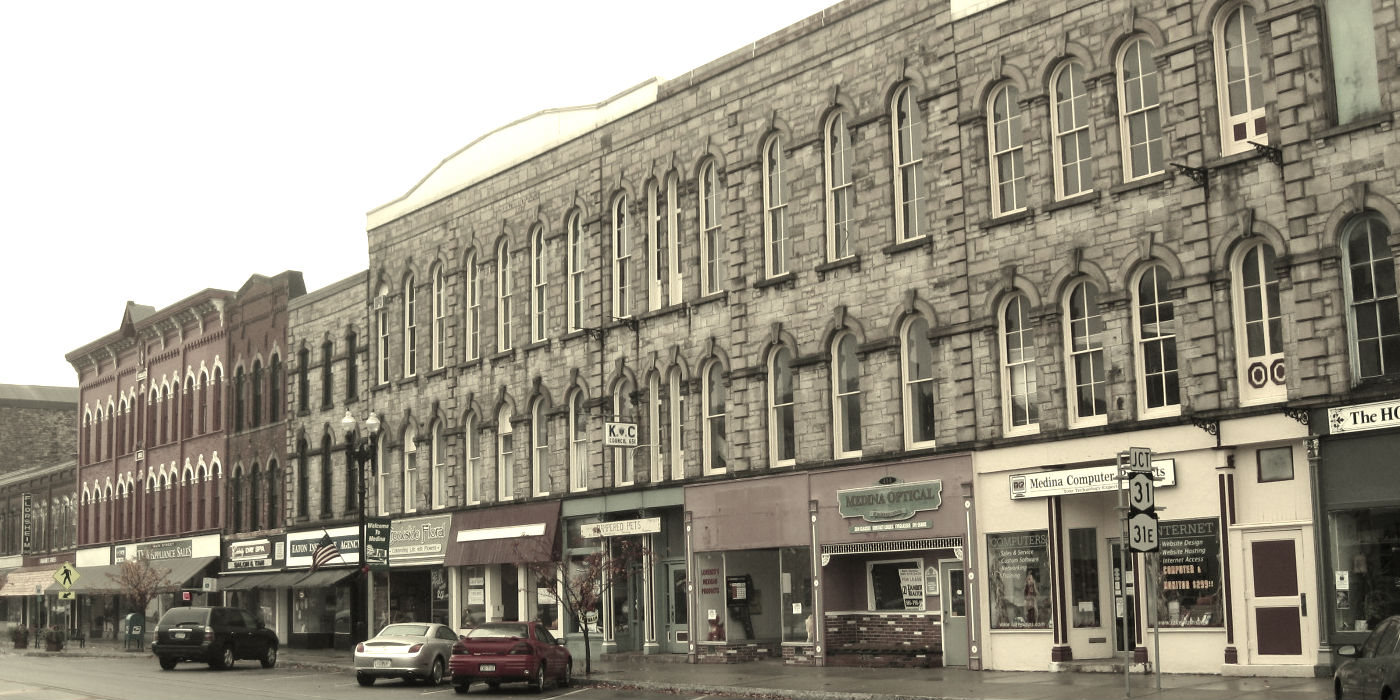 For me, 2014 was the Year of the Small City. Chattanooga. Raleigh. Buffalo.

Last month, we went even smaller. On a trip through western New York, we stopped in the small town (they prefer “village” actually) of Medina NY. It’s not the stereotypical “one stop light” town, but it’s close. For me, that makes it all the more interesting. I love small towns and the people in them. I’m fascinated by them: how they live, where they eat, what they do.

While we only stayed the night, we left the next day bummed and wishing we’d planned for a few more days to explore. We were shocked at how cool of a town (er, village) Medina was and just how much there was to see and do!

Here are seven of our favorite reasons to visit Medina NY …

Things to Do in Medina NY (New York) 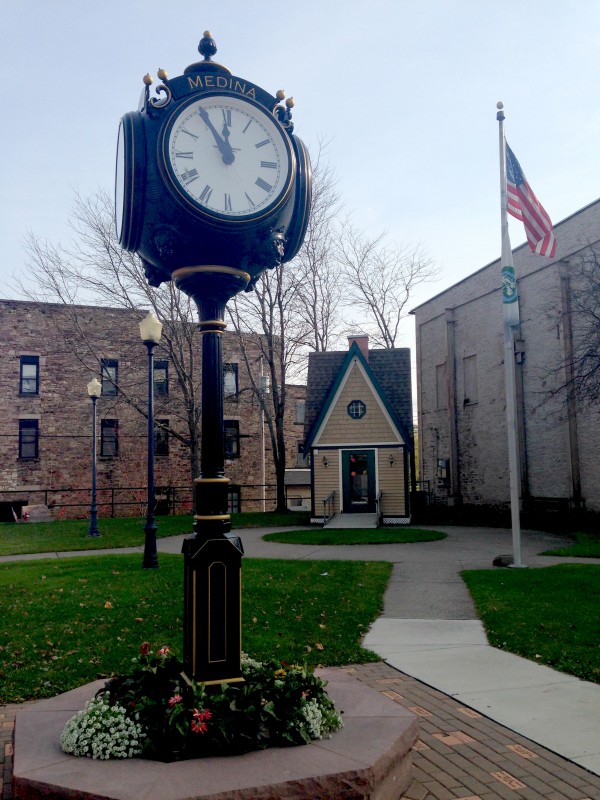 The pint-sized “downtown” core of Medina NY spans just 12 acres from the Erie Canal to the railroad tracks. But, like many quintessential small town main streets, it’s packed with history (in 1995 it was designated a historic district and listed on the National Register of Historic Places), beautiful architecture, friendly people, and a smattering of small-town shops. It’s easy to wile away half a day exploring Main Street alone. 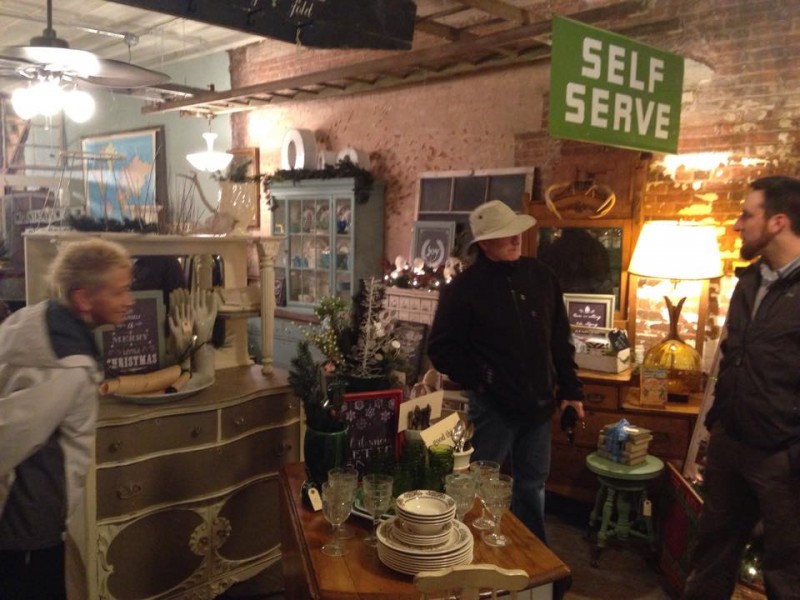 At ellen j goods, owners Lynne and JR offer repurposed and refinished furniture and accessories that range in style from Soft Industrial to French Country and Farmhouse Cottage to Retro Cool. The Book Shoppe (with an “e”) is a classic small-town bookstore with just the right amount of classics, new releases, and even a back room kids area.

Della’s Chocolates offers handmade artisan chocolates, including truffles, chocolate patties, and holiday candies. And The English Rose Tea Shoppe (again with an “e”) is a British-inspired tea-ery complete with British music and lace window treatments. They offer an assortment of loose leaf and bagged teas, as well as tea-centric accessories.

#2: … and the Quintessential Small Town Mayor

Yes, Mayor Andrew Meier is worthy of his own reason to visit Medina. Because, not only is he the village mayor, but also the church organist, lawyer, hotelier, historian … and all-around awesome guy. As a born and raised Medinan (that sounds right), he’s leading the charge for the village’s current revitalization efforts.

He turned a beautiful, historic shirt factory into a boutique hotel, cafe, and meadery (more on that below). He’s now focusing his efforts on restoring the crown jewel of the village’s history – a Civil War-era opera house.

The best part? You can often find him tooling around town or at his Hart House hotel, where he’s happy to greet new visitors to the village he loves.

Mayor Meier (how perfect is that name?) has spent considerable time restoring the town’s historic Shirt Factory Building. Built in 1876, the R. H. Newell Building was originally designed for use as a hotel. It could be said that this building and its restoration represent the model for Medina’s way forward. Fully embracing its rich, small-town history with an eye towards carefully repurposing its most important buildings and architecture for modern day uses. 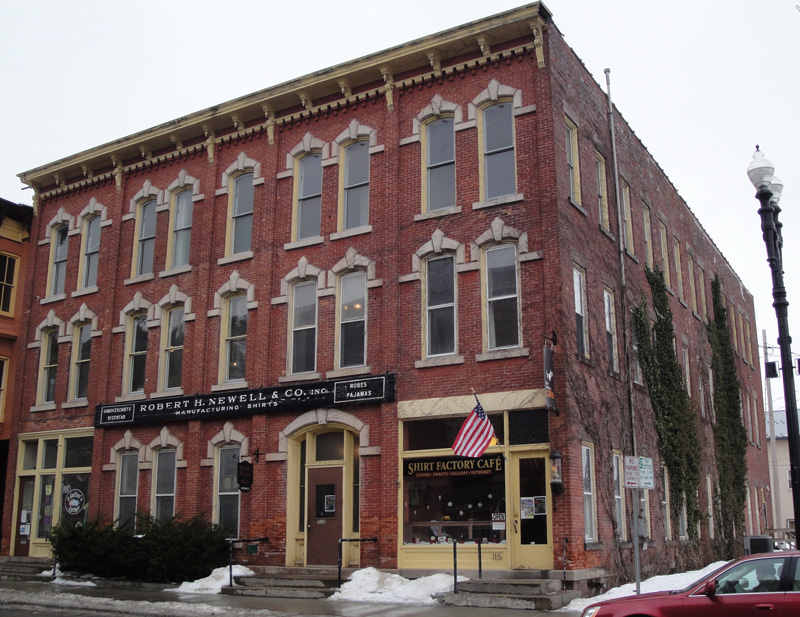 The RHN Building was converted to use as a factory before Meier purchased it this century and re-converted it back into, among other things, a hotel. In particular, the Hart House Hotel. 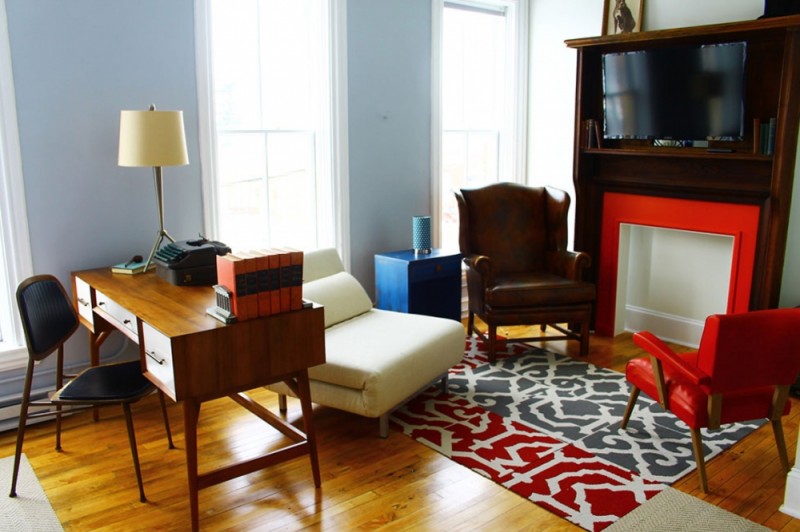 This surprisingly modern design seems perfectly suited to a boutique hotel in Brooklyn or San Francisco. Meier designed much of the interior himself and each room is uniquely outfitted in an urban, loft-inspired decor. It goes without saying that it’s the coolest accommodations in Medina. 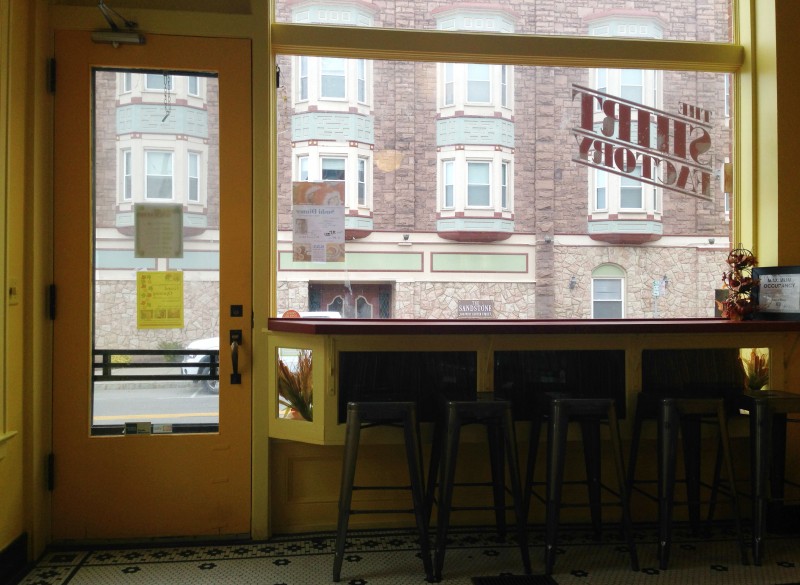 Downstairs, in the Shirt Factory Building, the appropriately named Shirt Factory Cafe offers great, made-to-order food and breakfast served all day. The Cufflinks Coffee – standard iced coffee with a vanilla ice cream base – was an interesting, just-sweet-enough surprise. As we enjoyed our breakfast at a leisurely pace, a steady stream of locals came and went, all exchanging pleasantries and first names.

For many decades, Bent’s Opera House was a prominent venue in Medina for concerts, plays, shows, commencements, elections, and other public functions. P. T. Barnum and William “Buffalo Bill” Cody were among the hundreds of touring performers who brought their talents to the Bent’s stage.

As motion pictures and other forms of entertainment became popular in the twentieth century, the Opera House fell into disuse. Yet its legacy was not completely forgotten, as Bent’s Hall was included as a contributing property to Medina’s Main Street Historic District, which was listed on the National Register of Historic Places in 1995.

Mayor Meier is overseeing its reconstruction with the help of generous donations from locals and sympathetic tourists. The project is still in its early stages with a long road to full restoration ahead. But touring it now, in its raw and most original form, is among the most fascinating experiences I’ve had in the U.S. It’s literally a step back in time through American history.

#5: The Beginning/End of the Niagara Wine Trail

Western New York’s Niagara Wine Trail is shaped like a giant apostrophe. So, depending on how you map it, Medina NY is likely your first or last stop (assuming you sample each one and, really, why wouldn’t you?). You’re forgiven if your first reaction to finding good wine in western New York is, “Huh?”

Believe it or not, the Greater Niagara region is one of the fasting growing wine regions in the state. It also boasts its own American Viticultural Area (or AVA). Leonard Oakes explains:

The signature terroir of the region is defined by the soil structure and topography carved out by the glaciers of the last Ice Age. The natural escarpment, fertile soils rich with deltaic glacial deposits, and the moderating effects of Lake Ontario create a lush macroclimate for the vineyards … 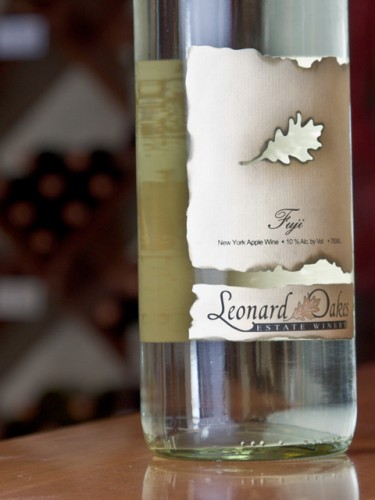 This means the wines of western NY have a strong minerality and earthiness. You can literally taste the region’s rock, dirt, and soil in every glass. And that’s a good thing. I found some of the best white wines I’ve tasted in the eastern U.S. here.

As an added bonus, Leonard Oakes also offers a unique Steampunk Cider. That any rural winery is hip enough to get the steampunk reference is a testament to how cool this place is. 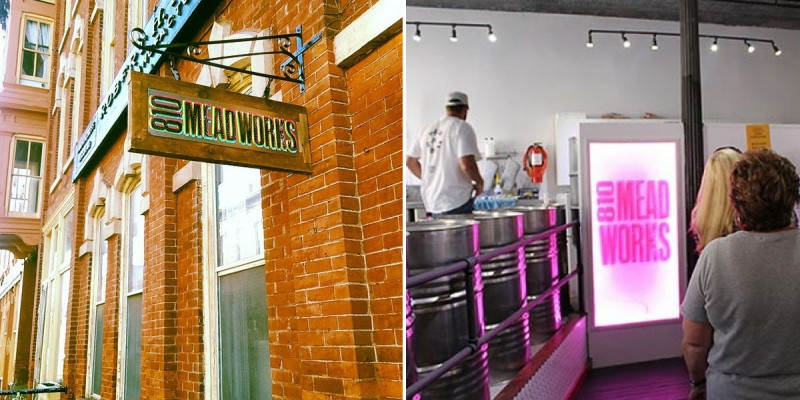 Outside of America’s major cities, meaderies have begun quietly peppering the country’s map. They’re on the rise but still enough under the radar that you feel as though you’re sampling something special. Medina’s newly opened 810 Meadworks is among a select few in western New York and quite surprising for a town of just 6,000 people.

The meadery is so named for the Bible verse Nehemiah 8:10:

Go and enjoy choice food and sweet drinks, and send some to those who have nothing prepared. This day is holy to our Lord. Do not grieve, for the joy of the Lord is your strength.

Any business that places god and booze in the same context is a-ok in my book. Aside from mead tastings, Meadworks also offers mead by the glass and bottle, handcrafted chocolates, hot tea and honey soda, and
local handicrafts and products for sale.

#7: The Upscale Comfort Food at Zambistro

I’m not qualified to say that Zambistro is the best meal in western New York. But it has to be pretty close. It’s among the best food I’ve eaten in a long, long time. At one point during our meal, Mrs. Vagabondish questioned, “Is it inappropriate if I lick the plate?” It was that good. (Make your visit there a true, over-the-top date night experience with a limo rental from Limo Find!) 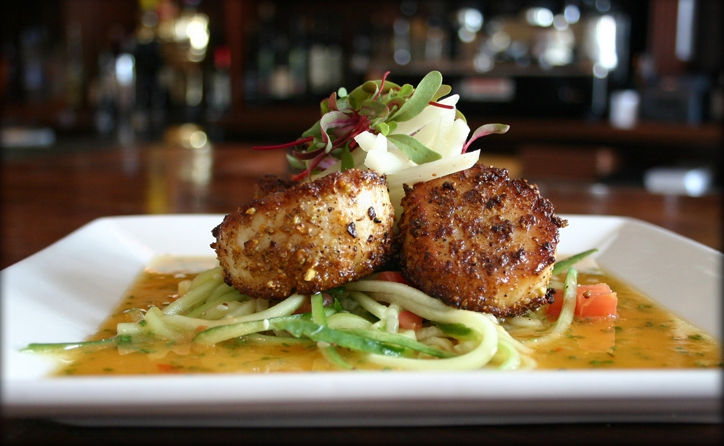 Scallops at Zambistro in Medina

I was shocked to find one of my all-time favorite dishes on the menu: espresso-rubbed steak. Naturally it’s topped with brown butter smashed potatoes and Gouda spinach, topped with crispy onion strings. Talk about gilding the lily.

We capped it off with their creamy, richer-than-normal espresso creme brulee with a subtle coffee flavoring that complemented the dish nicely.

After only one day, we were sad to leave Medina. It’s a rare destination that’s managed to embrace its historical roots and small town charm, while still looking to the future. All while staying largely off the tourist radar. Which is to say: get there before everyone else does.

Have you visited Medina NY? What are your favorite things to do there?