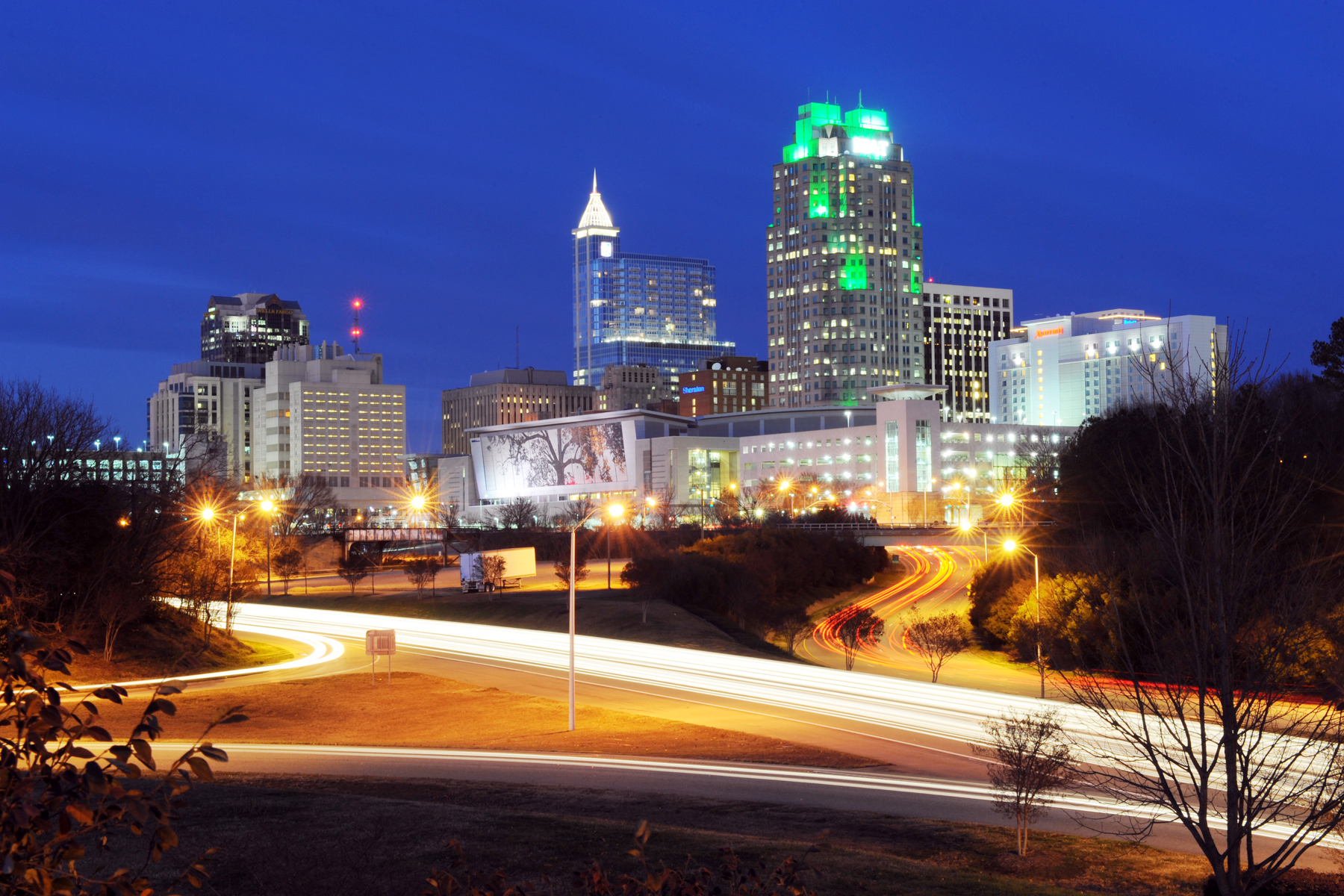 2014 was the year of the tiny city for me. Chattanooga, Tennessee. Raleigh, North Carolina. Then Buffalo, New York (mere hours before the storm dumped 18 feet of snow on the region) … to name a few.

While we Americans are a bit myopic about what constitutes “real travel”, there’s so much to see right here in our own backyards. Which is why I was so pleasantly surprised with Raleigh. I honestly didn’t know to expect. But after receiving an invitation to check out the city’s World of Bluegrass Festival, I figured it was the perfect opportunity. Beer, BBQ, and bluegrass … one out of the three will get me out of bed on any given day. All three at once? I’m in!

There are 120 breweries throughout North Carolina and that number isn’t just growing, it’s exploding. Raleigh is among the top five fastest growing cities in the country for craft beer. Downtown Raleigh in particular is doing more than its fair share and the result is a truly awesome craft beer scene.

John Frank, craft beer columnist for the city’s daily The News & Observer, reveals that it’s “now possible to hit four breweries, three bottle shops and five great craft beer bars in a walking loop from downtown.” He details the route for beer tourists to follow in this piece for All About Beer.

To prove its worthiness as a true craft beer destination, the city will also launch the Raleigh Beer Garden in 2015. It will officially be home to the largest selection of operational beer taps under one roof in the world, topping out at a whopping 365!

#2: Exploring the City on a Bikes + Brews Tour

If you’re partial to a lazy beer drinker’s (i.e. guided) tour of the city, talk to the folks at Oak City Cycling. They might offer an off-the-books biking tour of the city’s best breweries — a tour that combines the city’s two favorite pastimes into one. 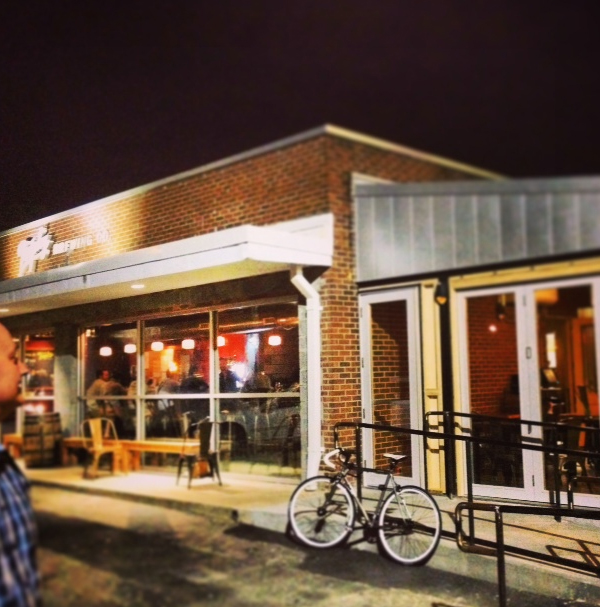 I took a two-hour tour that included stops at three of Raleigh’s most iconic breweries. My group hit up Trophy Brewing & Pizza Co., “a 3-barrel nanobrewery” that offers an eclectic mix of beer, with the Milky Way (a salted caramel sweet stout) being the standout favorite. 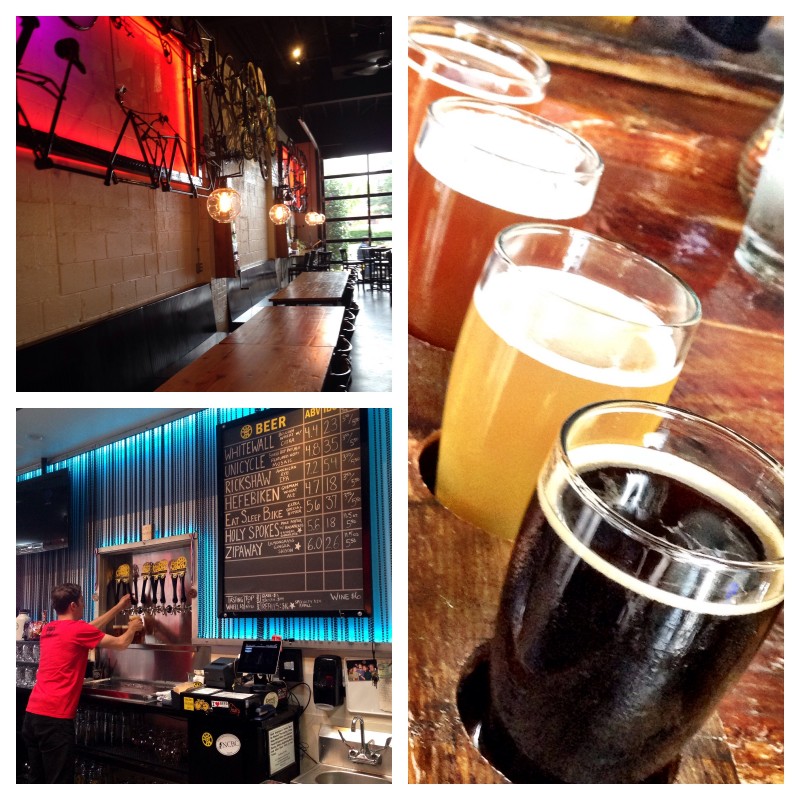 We also checked out Crank Arm Brewing. This former rickshaw company turned brewery is perhaps the city’s most well-known. The brewpub’s interior and their beers pay homage to all things cycling with names like Unicycle Single Hop Pale Ale, White Wall Wit, and Rickshaw Rye IPA. Inside, it’s a modern, hip vibe that feels more like a bike repair shop that also happens to have great taps.

Insurance issues aside, I’m amazed that more cities aren’t offering beers-plus-bikes tours! (I mean, what could go wrong with a bunch of buzzed tourists cruising a busy downtown on bicycles?)

Of course, what’s great beer without …

Don’t let the city’s diminutive size fool you. Raleigh’s food scene is legitimate and hardcore, able to hold its own against many other more metropolitan destinations. A few mainstay examples among many, many others … 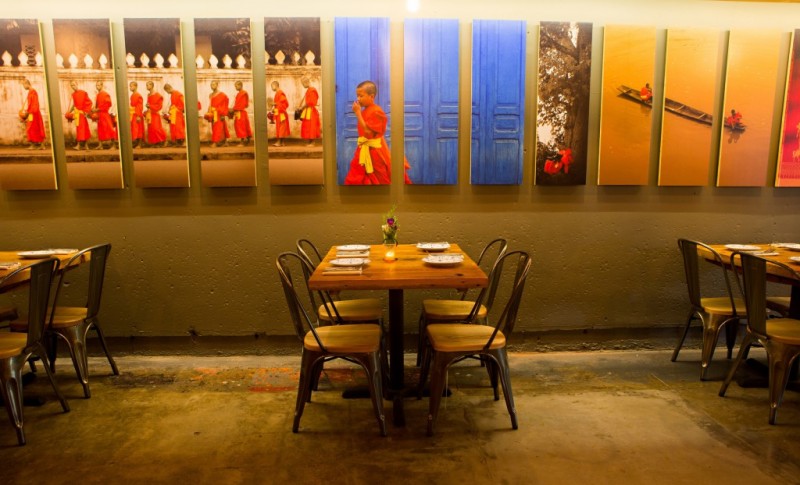 Bida Manda was my hands-down favorite restaurant for dinner in the city. It’s one of the only true Laotian restaurants in the country (in Raleigh of all places?), owned and operated by siblings Vansana and Vanvisa Nolintha as a “thoughtful gathering place”. Indeed the vibe is hip, modern zen and both the bar and restaurant are completely packed from open to close. It’s virtually impossible to get a table without reservations.

For more than five decades, Angus Barn (it’s actually located in a barn) has been a Raleigh institution. It’s known as “Beefeater’s Haven” with good reason — they serve an average of 22,000 steaks per month. It’s the kind of place where the almost absurd Bedrock Tomahawk Chop — a 42-ounce bone-in ribeye, aged and charred with a kosher salt encrusted finish — makes sense. “Sized for two or a challenge for one, if you dare! Yabba Dabba Doo!” Indeed. 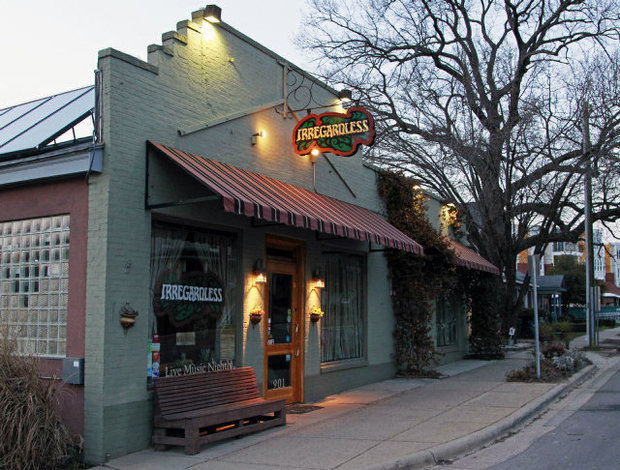 Other eateries of note include Fiction Kitchen (“farm-to-fork” and 100% vegetarian), Heron’s (a Forbes Five Star and AAA Five Diamond signature restaurant), and Irregardless Cafe. The latter has been a staple of the city for forty years and a driving force behind the evolution of Raleigh’s gourmet food scene:

It opened as the city’s first vegetarian eatery, introduced the community to the concept of sustainable culinary practices, banned smoking 25 years before the state’s official mandate, and was instrumental in cultivating one of the area’s first community gardens.

And there are plenty of awesome annual foodie events to boot, including:

#4: … and Its (Not-at-all-surprising) Amazing BBQ Scene

Raleigh’s BBQ scene alone is worth mentioning as its own point. If you love BBQ (are there really people in the world who don’t? If so, I’m not sure they can be trusted …), North Carolina and Raleigh in particular are home to some of the country’s best. I won’t say “the best” because true BBQ afficianados can be a contentious and ornery lot when the conversation turns to which region of the country actually serves The Best. 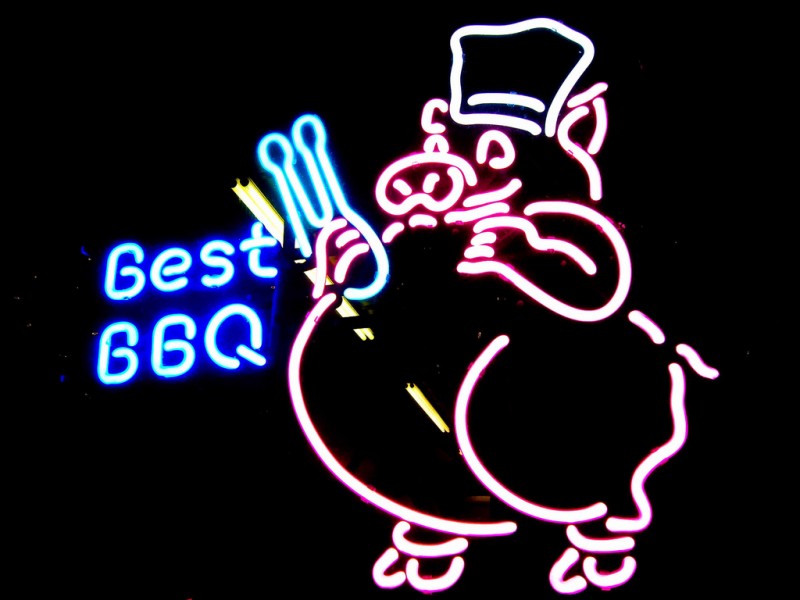 That said, you’ll find plenty of good ‘Q in Raleigh. Check out The Pit which promises “everything but the squeal” — the entire pig is smoked and shredded, then flavored with a special blend of vinegar and spices. It’s all served atop white linens in a restored 1930s meat-packing warehouse.

The list goes on … and on. Honestly, it’s very, very difficult to find bad BBQ in Raleigh. Check out VisitRaleigh.com for a comprehensive list of the city’s myriad BBQ joints.

#5: The Home of Bluegrass

Wise bar-goers never attempt to debate sports, religion, or politics. In the South, you may not wanna mention BBQ or bluegrass either. Unless you’re itching to start a brawl. North Carolinians are fierce about protecting their namesake bluegrass. They invented it and they claim it for their own. End of story. Thank you and g’night.

That’s their side of things. I don’t have a dog in the fight, so I won’t attempt to debate the issue. Either way, Raleigh has a seriously kickass bluegrass scene. While just about every gin joint with a stage in the city hosts great live music, the annual World of Bluegrass is the country’s premier bluegrass event. 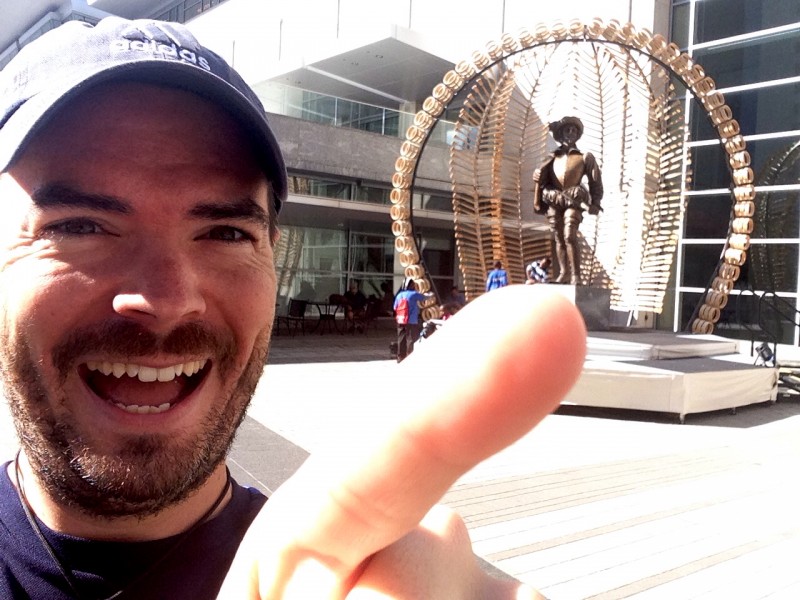 Every year in late September, hundreds of thousands of fans descend on downtown Raleigh to celebrate all things bluegrass. The week features four separate events and hundreds of offerings for every bluegrass professional and music fan. 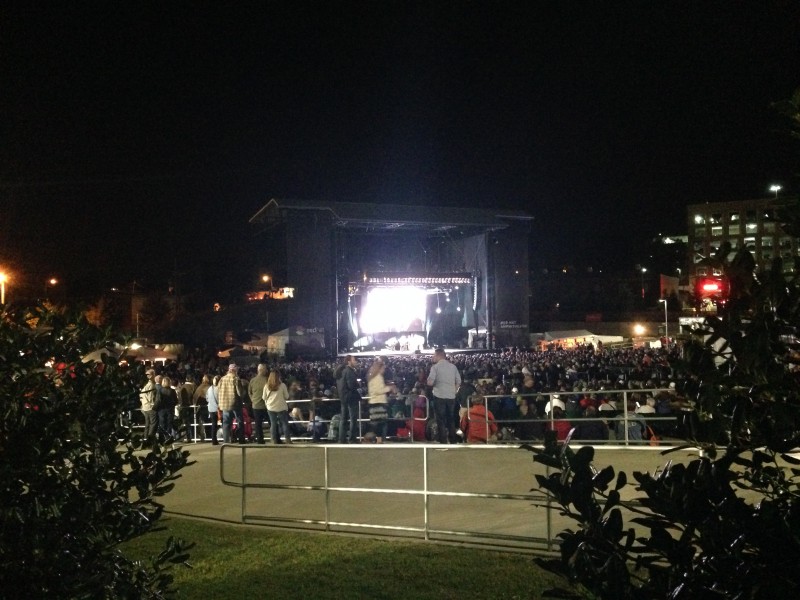 Throughout my 48-hour stay, musicians filled the streets and even hotel lobbies with impromptu bluegrass jam sessions. It’s a rowdy, but controlled atmosphere. There’s plenty of boozin’ and hootin’ & hollerin’, but it’s still a good vibe for children and travelers with families.

Amen to any city that offers *all* of its museums to visitors for free. The complex that’s home to both the North Carolina Museum of Natural Sciences and Nature Research Center is like Xanadu for geeks and science lovers (myself included).

The former focuses on the south in general and North Carolina in particular with exhibits that explain coastal erosion, local plants, insects, and wildlife. The life-like exhibits blend live animals with man-made dioramas. Main exhibits are separated into distinct ecosystems including “Underground”, “Rainforest”, “Savanna”, etc., while other special exhibits include the “The World’s Largest Dinosaurs” (which I sadly missed by a week … [sad trombone]).

The MoNS connects via a footbridge to the Nature Research Center — a massive, 80,000-square-foot, high tech educational center that offers visitors a unique, in-depth look via floor-to-ceiling glass walls inside working laboratories of the area’s top scientists. The scientists working here bring visitors in for scheduled talks and educational projects throughout the day. Visitors can explore remarkably well done exhibits on everything from animal health and microbiology, to astronomy and paleontology. It’s fantastic for grown-up children (again: me), but great for actual kids as well. Allow at least 2-3 hours to tour the entire complex, although you could easily take your time and spend the better part of a day. Tip: hop aboard the free R-LINE “Downtown Circulator” (PDF map) to get there — it’s also worth it just for a free tour of the city to get your bearings. 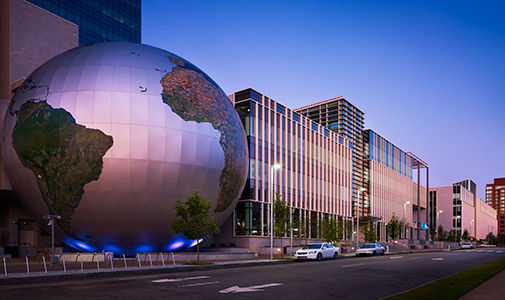 There’s also the North Carolina Museum of Art and North Carolina Museum of History, and City of Raleigh Museum. While not a museum, the James B. Hunt Jr. Library is also well worth a look for geeks. It features one of the world’s most advanced, automated, robotic library systems called bookBot, that stores up to 2 million volumes in 1/9th of the space needed by traditional shelves. Again: all free. 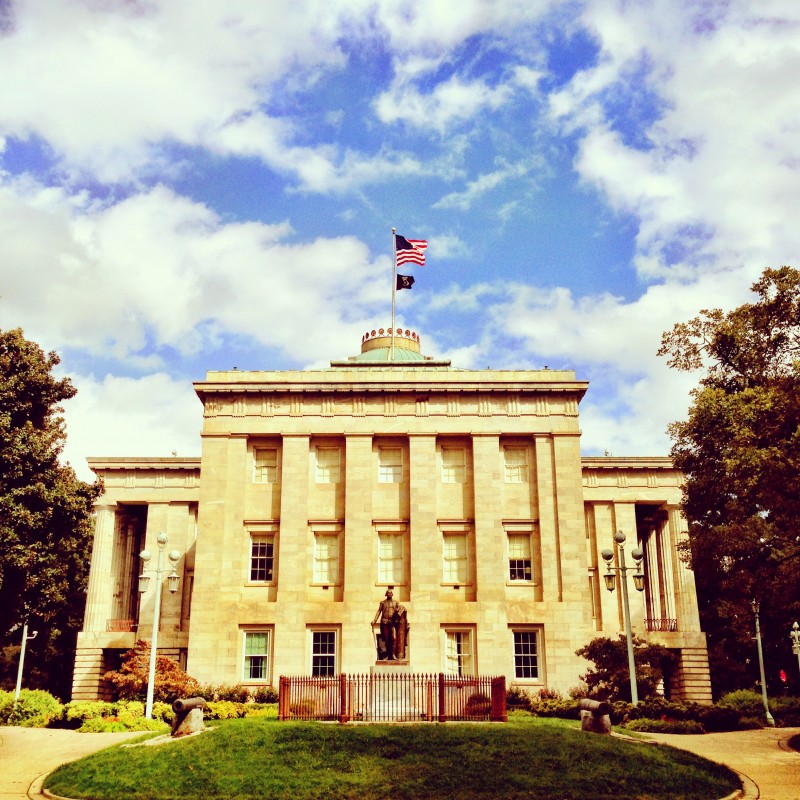 Raleigh is among the South’s most historic cities and no tour of America’s 19th century history is complete without a tour of its downtown and surrounding suburbs. The city offers a wide variety of walking and hop-on bus tours, many with specific themes around the Civil War, Victorian homes, colleges and churches, love stories and scandals, and more. 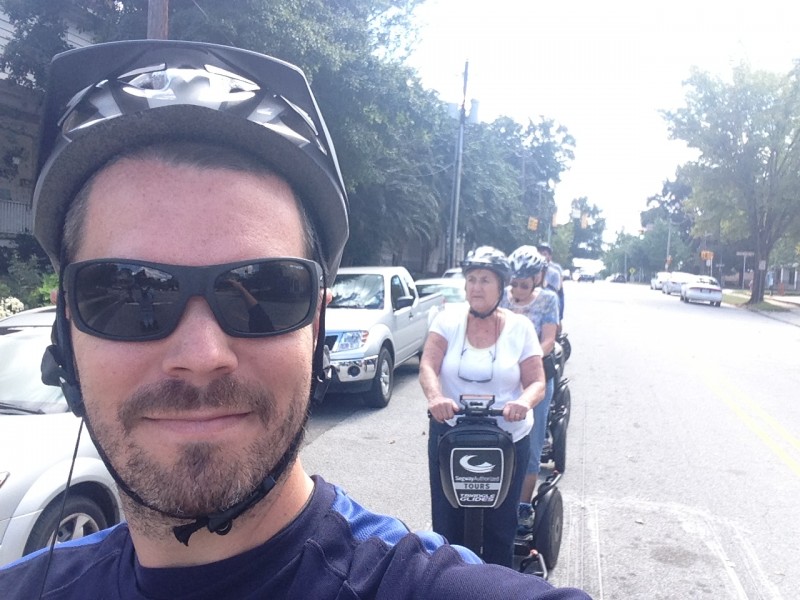 I jumped aboard a Segway Tour with Triangle Glides (complete with sexy helmet and an intro on how not to fall of a Segway). Their two-hour Capital City East Tour is a grand tour of Raleigh’s most historic sites, including Historic Oakwood, a quaint, downtown neighborhood filled with beautifully restored 19th-century homes in a variety of architectural styles. We also checked out historic Oakwood Cemetery, including a stroll in the Confederate Cemetery. It’s a fascinating glimpse into the city’s past! 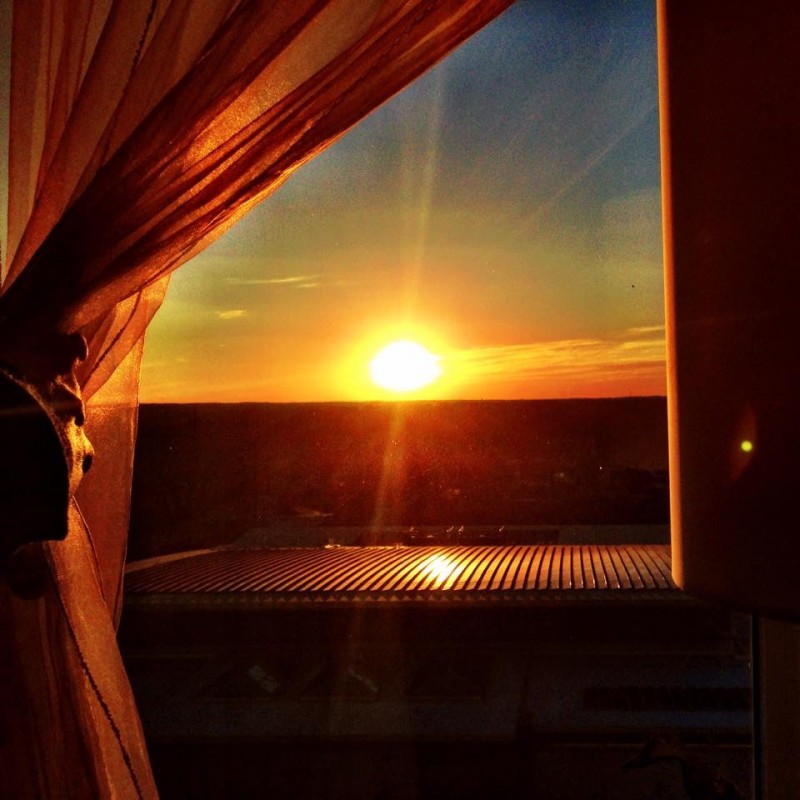 In the end, I fell in love with Raleigh (I seem to fall in love with every destination I visit …). It pleasantly surprised me in every respect. My trip there was a great reminder that we have seriously awesome cities in the U.S. that the glossiest travel magazines rarely cover. And that’s a shame because it truly is one of the coolest little cities in the south!