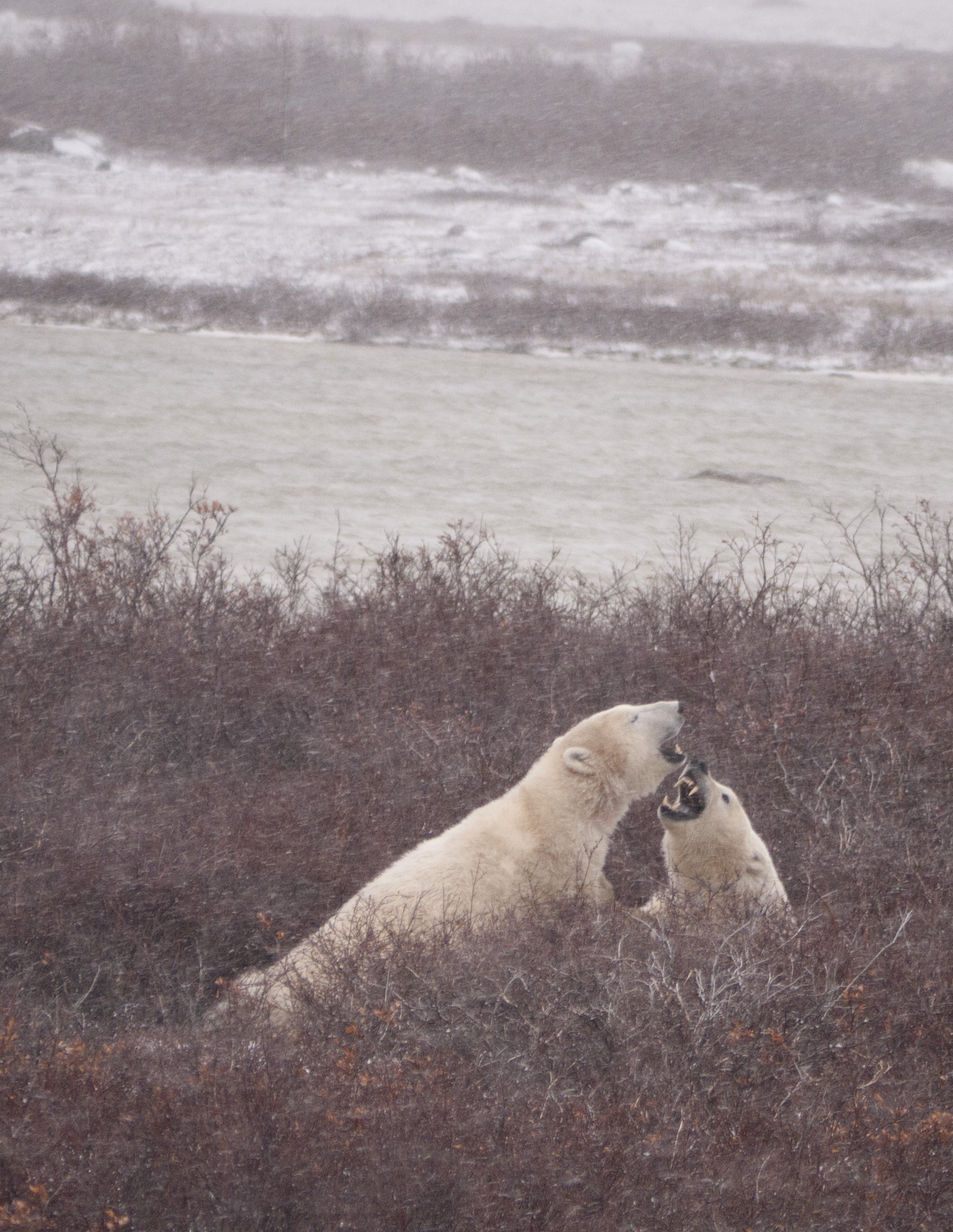 Our last full day on the Canadian tundra will prove the most exhilarating of our journey. I awake before dawn to discover that a massive blizzard has been ripping through Churchill for the better part of last night. It’s snowing firmly sideways with no chance of letting up and the wind is howling so feverishly against the hotel siding that it’s almost difficult to think. There’s no chance that it’s putting a damper on our last tundra visit though. Quite the contrary: we’ve all come to this part of the world with visions of vast, snow-covered tundra and well-camouflaged wildlife scurrying around our rover. Today will not disappoint.

Our shuttle arrives at the rover launch for 7:30 a.m. sharp. Baz seems pleased. We shake his hand as we board the rover, pleasantly surprised to see him briefly crack a smile. It’s now his thirteenth day on the job and he’s taken to it quite well.

I’ve no idea how we can possibly top yesterday’s outing. I’m still reeling from my all too close and personal encounter with a wild, 900-pound polar bear. Even were we headed home last night, I’d leave Churchill more than satisfied that I saw what I came to see.

We’re the first rover out at dawn, again affording us the perfect opportunity to slowly watch the tundra colors change. The solar glare is much paler today and the snow’s reflection reveals a much more monochromatic palette than yesterday.

We spot our first bear far in the distance – a hulking, potato chip-colored mass. Actually, no. It’s three bears – a large mother and two cubs – neatly intertwined in a fuzzy, white pile. They’ve decided to bed down in the willows for the day, to conserve their heat and energy in the relentless blizzard. 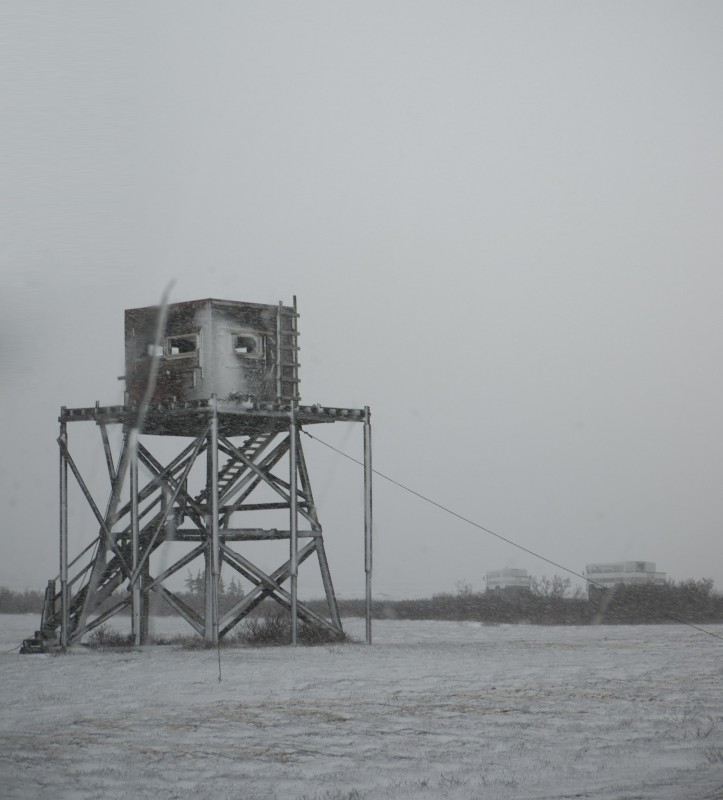 The remainder of our journey out proves uneventful for several hours. Undeterred, Baz takes a chance and heads out to a spit of land – a tiny, remote peninsula – that he knows well. He’s confident the area will provide us with a bevy of polar bear activity. We arrive to find another rover already hunkered down, with it’s stabilizers down and a large satellite antenna poised skyward. It’s clearly on a research mission out here, but researching what? Whatever it is, they’re in it for the long haul.

We park nearby and decide to wait. Patience is most definitely a virtue out here on the tundra. Seconds later, two massive male polar bears emerge from the willows in an explosive and seemingly violent frenzy. 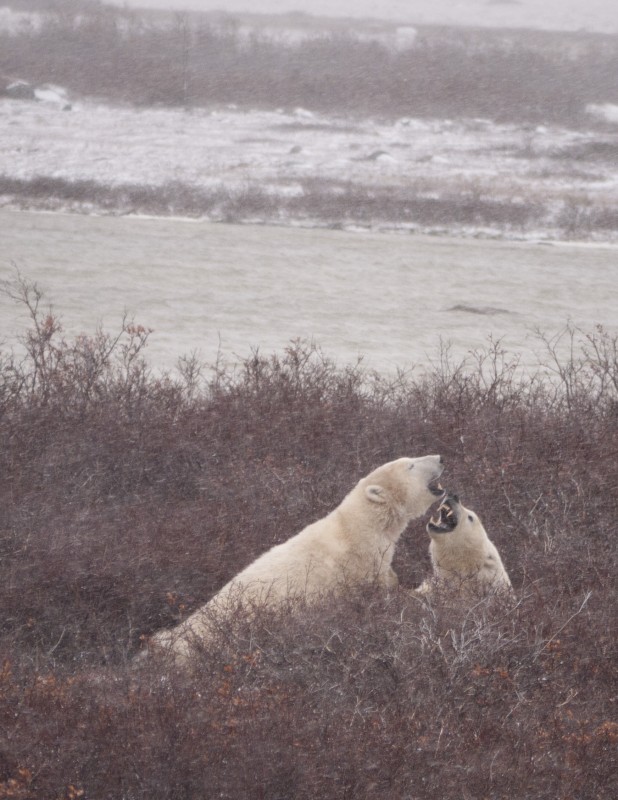 The whole of our tour group leaps to its feet, stunned. This is what only a few thousand travelers come to Churchill every year to see. 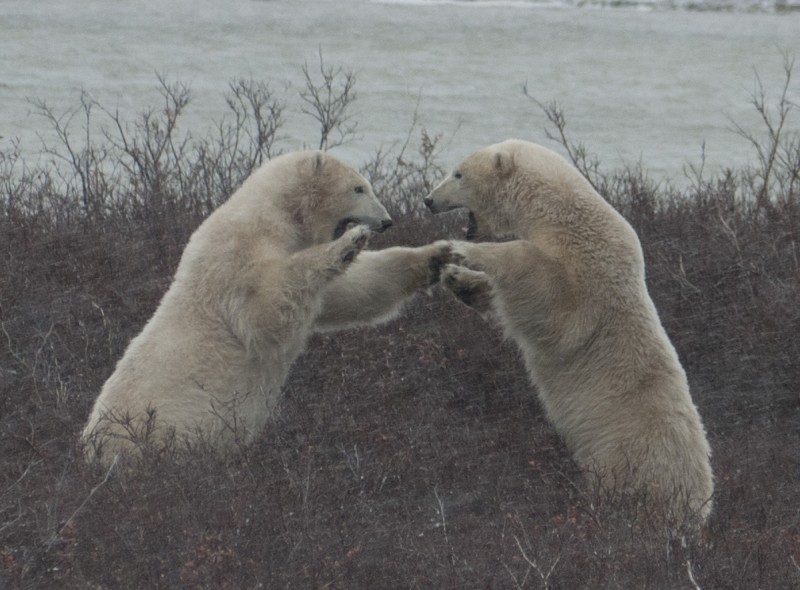 The experience is surreal and exhilarating in a way I can’t even begin to describe. It’s like living for an instant in the pages of National Geographic.

They alternate in twenty minute intervals, relentlessly pounding on each other, then resting. It’s a feverish pace which Brent assures us that they can maintain for days. On the upside, their willingness to expend so much energy indicates that they’re healthy and full – two great signs that they’ll likely make it through the long, harsh Subarctic winter.

When word of these two spreads across the wire, every rover on the tundra for miles comes to spectate. We watch these two males spar for several hours, with no interest in looking elsewhere. Once the two bears have enough of each other, they turn their attention to the long line of rovers and tour go-ers gawking at their display. 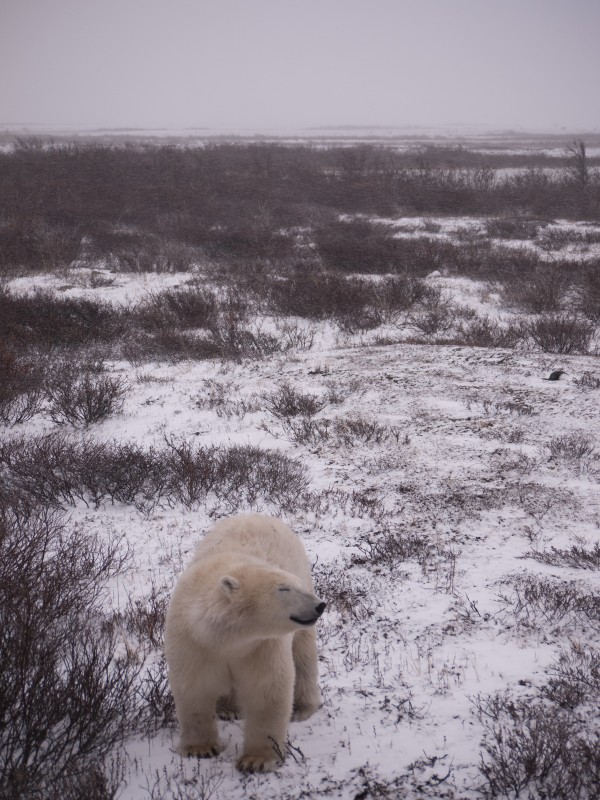 This particular bear chose to inspect the rover adjacent ours a little too closely, even snacking on the truck’s heating duct system: 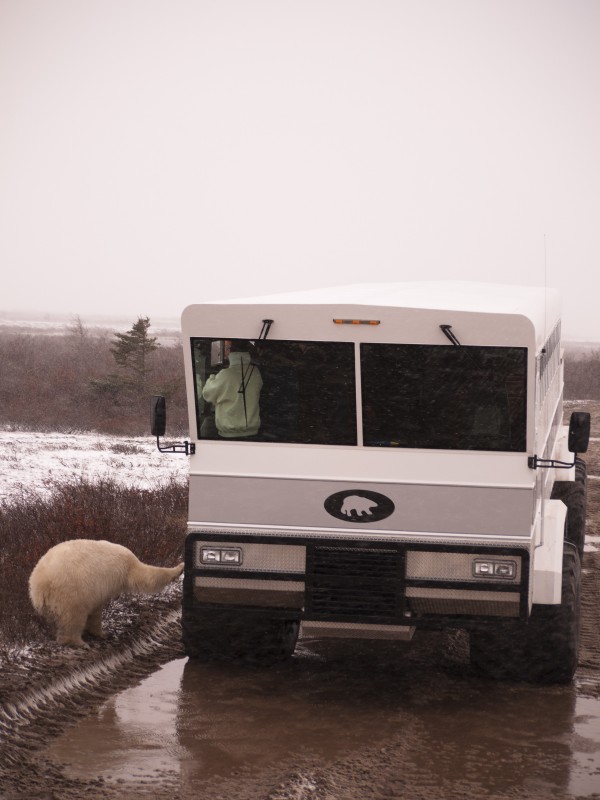 Well, Ma’am, Looks Like You’ve Got a Transmission Leak

Standing on the outdoor deck of our rover, nearly blinded by the driving snow and ice, I watch in awe as the two polar bears brutalize one another. It’s one of those rare moments that, as it’s happening, I realize I won’t ever forget. You wouldn’t know it from this photo, but I’m ecstatic beyond words at the scene behind me: 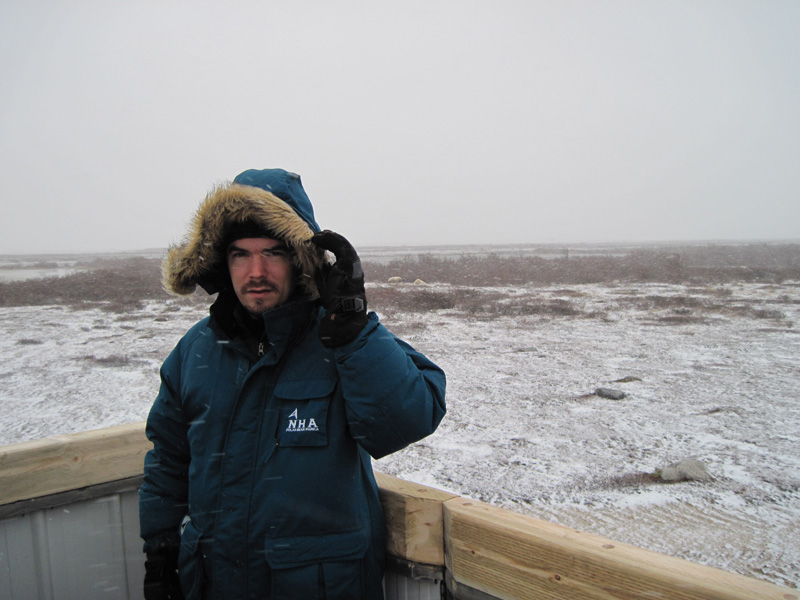 On the Back Deck of the Tundra Rover, Watching the Polar Bears Spar

Final Hours on the Tundra

We hunker down for several more hours – partly because it’s lunch time and partly because there’s a rover traffic jam making our return path impassable. Shortly after one o’clock, we’re on the move again. This time, it’s back to the Tundra Lodge several miles away. The terrain here is vast, but Baz decides to go with what he knows, to return to those places that never seem to disappoint.

But I’ve one last item on my mental checklist of “Churchill Must-see’s”: to spot and photograph an Arctic hare. They’re elusive and, on this densely snow-covered terrain, virtually impossible to spot.

The last few hours of our final day on the tundra are quickly evaporating and it’s not looking like I’ll be able to tick that box. Suddenly a bit of radio chatter belies my fear: it appears there’s a lone rabbit wandering the road just ahead of our rover convoy.

This is rather unusual, since hares are wise to their own camouflage and use it to their advantage at every opportunity. They’re rarely seen in the open. During snowstorms, they typically settle in on the windward side of small rocks, doing their best to impersonate a snowdrift.

There’s an Arctic Hare in There (Churchill, Manitoba)

This little specimen is either hungry, too curious what these large, hulking white machines are doing in his space, or simply not that bright. He dances around our convoy for five minutes or so before moving on.

Our day ends with a somber trek back to rover base. With the realization that this is our final hour on the tundra, we’re all elated, tired, and quietly reflecting in awe of our experiences over the past two days.

Once more, we pass the mother with her two sleeping cubs who haven’t moved an inch from the willows all day. It’s the perfect microcosm of the slow, deliberate pace of life on the tundra.

After a late breakfast at the Northern Nights Lodge, we’re off for a leisurely half-day in the heart of Churchill before heading home. Polar bear photo opps aside, there’s a number of things to do “downtown”.

As any traveler with an appreciation for knickknacks knows, the more kitschy the souvenir, the better. For me, snow globes and Christmas ornaments bearing the names of my destinations are a must. Great White Bear Tours also operates a gift shop that peddles these little, must-have gems: 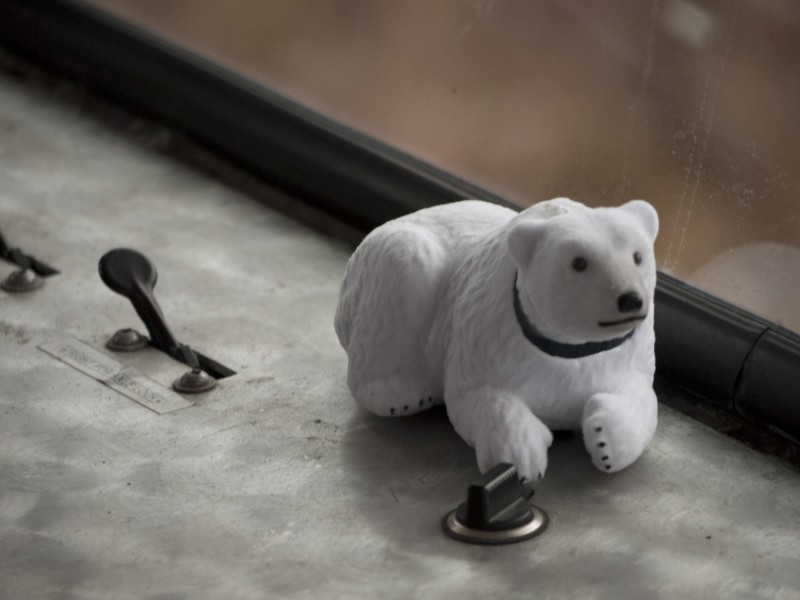 Just outside the Arctic Trading Co, I fell in love with this Husky puppy, appropriately named “Alaska”. 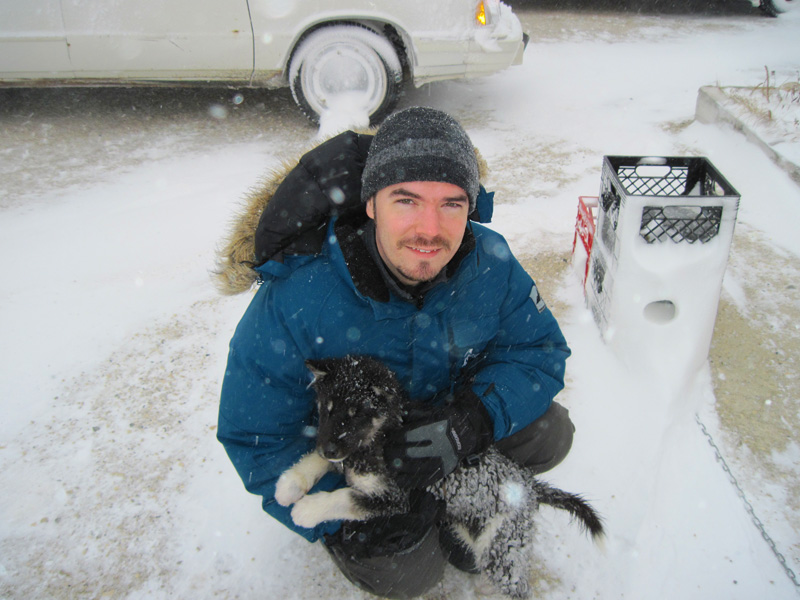 After lunch and a brief visit to the Eskimo museum – one of the most thorough and well-maintained of its kind in North America – we’re off to the airport for our return flight to Winnipeg.

The wind and snow have refused to let up now for almost 36 hours. I’m starting to wonder if we can even fly in this weather. As luck would have it, it’s par for the course in this part of the world and the flight proves surprisingly uneventful.

One hour into our flight, the dense cloud cover breaks. It’s the first time I’ve seen the tundra landscape from above and I can only liken it to flying over the surface of the moon. It’s a vast, bleak, colorless stretch of cratered earth that stretches seemingly endlessly. It’s unlike any I’ve ever seen. And it’s simply beautiful.