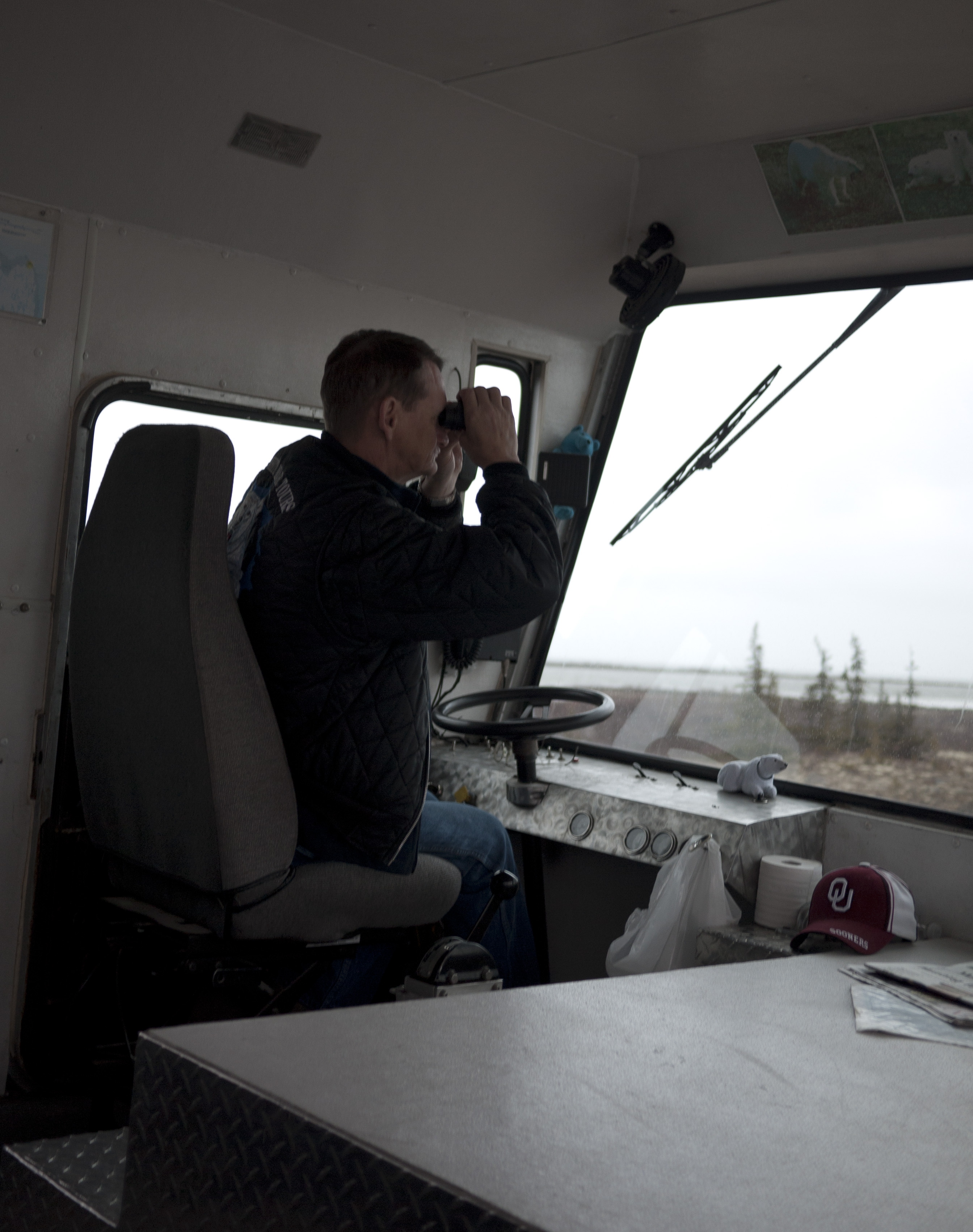 How to Chase Polar Bears Across the Canadian Subarctic – Part 2

After a quick breakfast at the Northern Nights Lodge, we set out before dawn to be the first rover out on the tundra. It’s a cooperative environment among fellow rover drivers to be sure, but there’s always a bit of unspoken competition. Baz is chomping at the bit when we arrive. I barely make the jump between the rover launch platform and vehicle door before we’re off and running.

Yesterday’s outing was a bit of a disappointment. Now our expedition leader, Brent, is virtually guaranteeing multiple bear sightings today and Baz has the binoculars affixed to his face like we’re on the lookout for German U-boats. 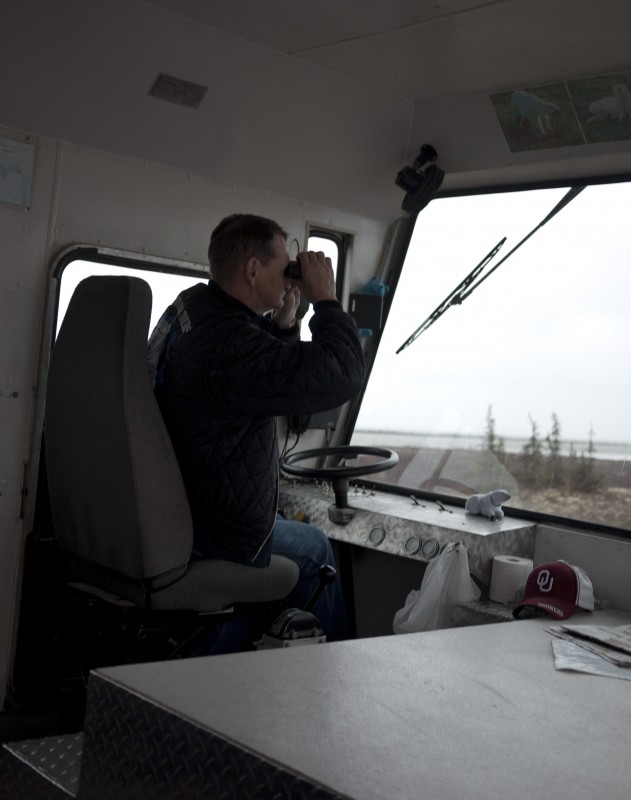 “We saw over 100 polar bears IN THE FIRST HOUR ALONE!!! We sparred with three of the male cubs and shared good-natured jokes over high tea with the females! Thanks, Natural Habitat Adventures! [ting!]”

I kid of course. But it’s clear that many travelers before me have experienced a good number of bear sightings on their tours. Would I return home, having visited the “polar bear capital of the world”, bear-less?

On the hour-long drive to our first rover stop, Brent suggests we relax during the dawn hours and reflect on the stunningly bleak tundra. It’s difficult, tricky at first. To fully appreciate this beautiful, otherworldly landscape, one must slow down, be patient. Fall provides a thick, constant cloud cover ensuring that sunrise is so subtle as to be almost imperceptible. The sky grows lighter by minute degrees to reveal the brilliant greens, reds and oranges of lichen-covered rocks. It’s like watching a monochromatic painting evolve ever so gradually to reveal perfectly natural, pastel scenery. It all clicks and for a second, I don’t even care about the polar bears and fleeting glimpses of wildlife. For a brief moment, I appreciate the vast, naked tundra as a beautiful environment in its own right.

In a daze, oblivious to my tour mates, I’m staring listlessly out the rover window. Then I spot it – far off in the two o’clock position. It’s a potato chip colored speck at least a half-mile off. Suddenly it moves. Then again.

Baz breaks course, away from the other rovers in our caravan, intent on intercepting him. As we move closer inch by inch across the tundra, we’re dead in his path now. This, our group’s first polar bear, is coming right at us. Our entire tour group is on our feet, leering out the right side of the rover.

No one so much as exhales as the young male passes within feet of our rover. He’s a relatively small specimen and Brent assures us that he’s clearly on the move away from something. He walks past with purpose, conviction – without so much as slowing down to inspect us. He wants no part of whatever is following him – likely another, much bigger bear. 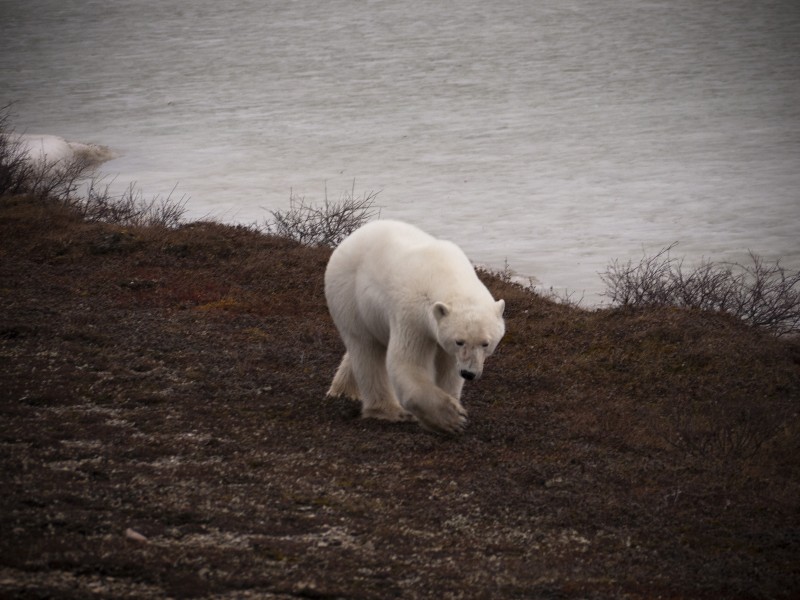 From then on, it’s a game of punch polar bear. It’s like someone threw a switch to simultaneously release every bear in a two mile radius from their hidden, underground dens. Our tour group is spotting so many that it’s difficult to decide which one to photograph (or saddle and ride as I unsuccessfully attempt, much to Brent’s chagrin).

For the next three hours, it’s an endless menagerie of white wildlife. Arctic foxes, ptarmigan and polar bears abound. 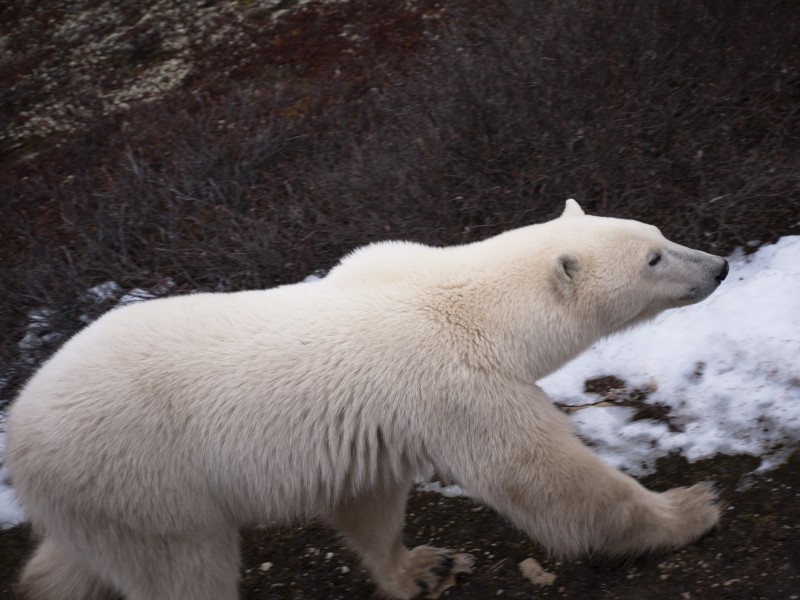 Shortly after lunch, Brent relays how highly adapted polar bears are to surviving and thriving in the Arctic. Their sensory perception is so vastly superior to ours that we’re virtually blind by comparison.

In observing the all-day parade of bears as we did, an interesting pattern emerged: each one would stop every 100 yards or so, stick their nose in the air, and sniff. As humans, we rely heavily on visual cues from our environment. Bears however absorb massive amounts of information from their nose – temperature readings, wind direction, nearby prey, other bears (i.e. potential threats). Some scientists have suggested they can even smell ice. Yes, really. 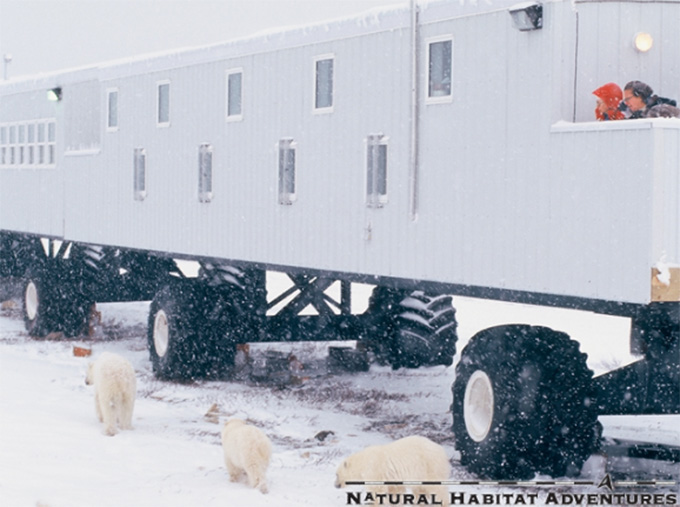 At this point, our tour leaders make the call to stop by the Tundra Lodge to round out the day’s sightings. The Lodge is a semi-permanent hotel on wheels where NatHab guests can book a week long vacation of near-constant bear and wildlife photo opps right from their bedroom window. It’s a phenomenal concept.

Evidently this small, young lad fancied a nap at the Lodge as well, as he’s already there when we arrive: 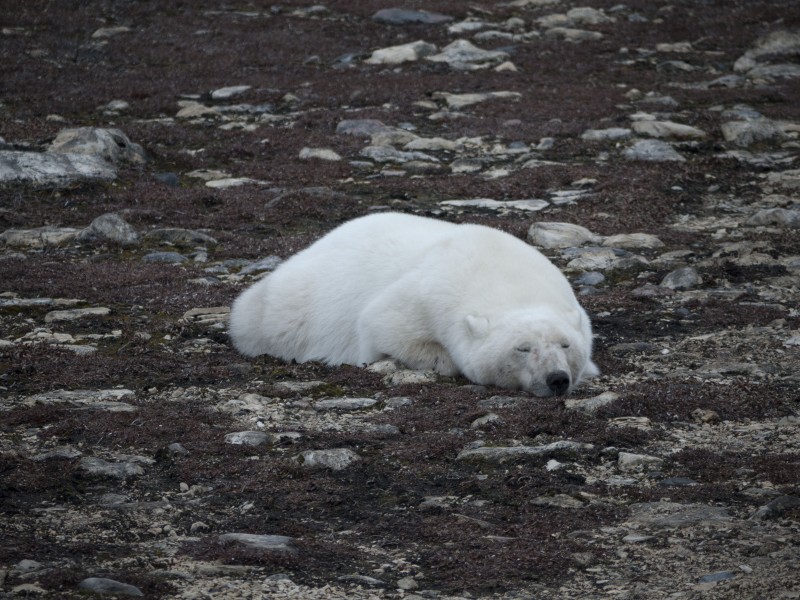 After just ten minutes, with his eyes closed, I can only imagine he was teetering on the edge of a nice sound asleep. Suddenly a monster bear – the largest we’d see all week – crept up behind him. With a loud snort and a shake of his massive head, the resting male turns to see this beast headed right for him: 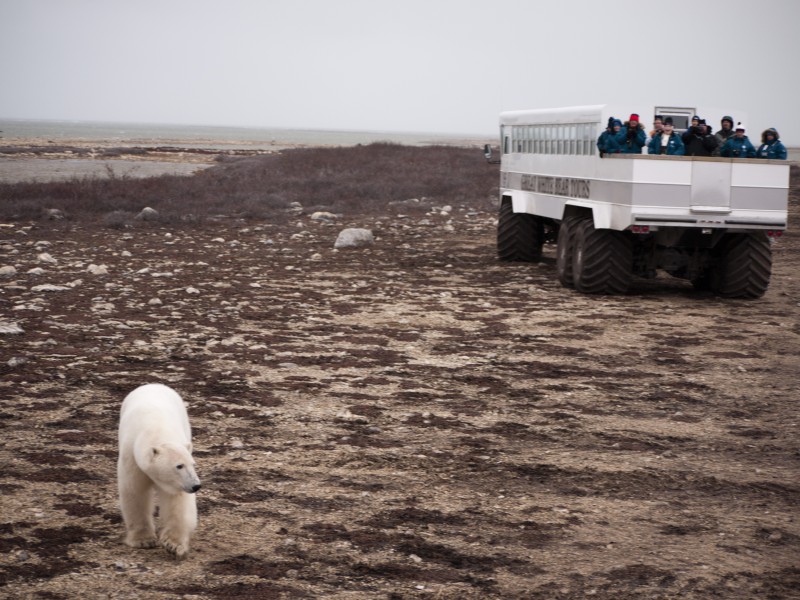 … and jumps like I didn’t know a 500 pound creature could! This massive, 900-pound polar bear is aptly named “Rocky” and it’s clear from the marks on his nose that he’s been in more than a few scuffles. 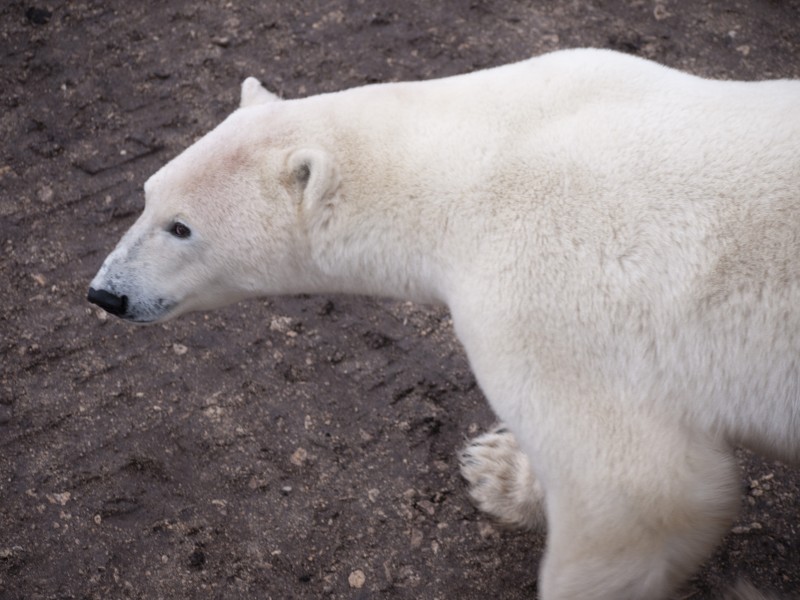 He walks purposefully, fearlessly to the back of our rover, passing literally feet from my face. If he’d stood up – all seven feet of him – I could have hand-fed him. Stopping at the rear of the rover, he glars at each person on the rover’s back deck individually. Brent would later reveal this is a means of directly discerning potential threats (or meals!). A bear of this size needs 150-200 pounds of food every five days just to sustain its body weight. Read: they would have no problem consuming me (and the leg of somebody else as an appetizer) in a single sitting.

After several minutes of inspecting our group, Rocky decides he’s had enough and it’s time to move on. While he’s walking away, Brent slides the inside window of the rover open (notice a barely audible “woosh” around the 2:48 mark in the video below). Upon hearing this, Rocky stops, immediately turns around and nearly lunges for the window.

Brent later admitted it was one of the scariest encounters he’s ever experienced as Rocky’s face was literally inches from his own. After further inspection of our rover through the window, Rocky decides to move on for good.

Their curiosity and awesome strength make for a mean combination, as evidenced when he proceeded to tear the metal siding off the propane car of the Tundra Lodge. For the better part of an hour we watched him tear a path around the Lodge, before he and we all decided to move on.

Our return to the rover base provides countless other bear sightings, including a mother with two cubs all sleeping atop one another in a giant, fluffy white pile. And if that weren’t adorable enough, we’re fortunate to spy this little male cub cooling his massive white butt on a rock: 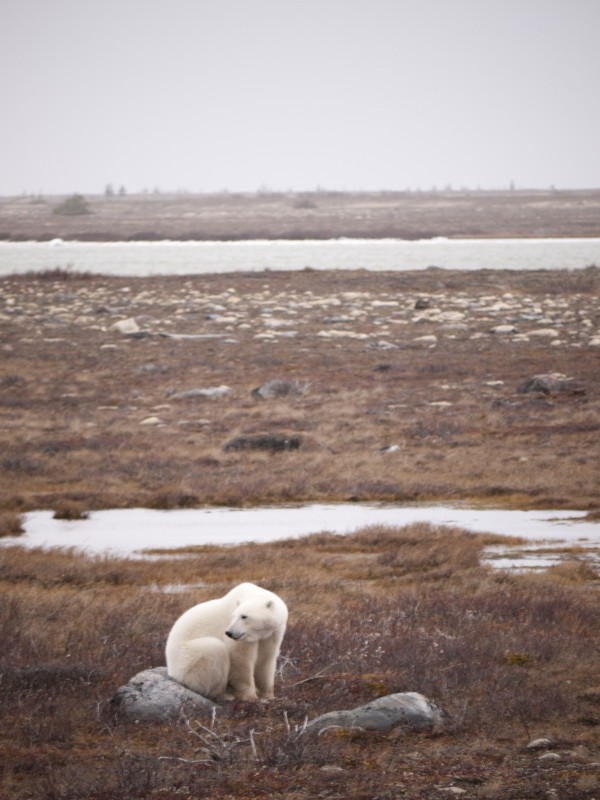 Brent notes that it’s the first time in twenty years that he’s ever seen a polar bear do this – it’s strangely human-like.

We round out the day back at Northern Nights Lodge for a tasty bit of barbeque ribs – another reminder of just how surprisingly good the food is in this remote part of the world.

It’s the perfect ending to a fantastic, bear-ful day on the tundra. But even today won’t prepare us for the amazing, once-in-a-lifetime, National Geographic-style bear action we’ll witness tomorrow!