Nestled against violet mountains on the South Island of New Zealand lies the self-proclaimed “Adventure Capital of the World”: Queenstown. This alpine resort town has it all — a pristine recreational lake, nearby ski slopes and the gateway to some of the most scenic hiking trails on the planet. On almost every street, advertising brochures beckon from doorways like prostitutes in a red light district. Jet boating, heli-skiing, and luging lure hordes of thrill-seekers who converge on the town each season.

The first bungee jump from the Kawarau Bridge in the 1980’s became Queenstown’s claim to fame, but it was the marketing from a local skydiving operation that enticed us the most:

It takes a certain kind of person to step out of an aircraft at 12,000 feet into thin air. You can expect sensory overload as your mind, soul and body fight against every natural, self-preservatory urge.

“Was I the kind of person who could jump from an airplane?” I wondered.

Certainly, I had just survived a rigorous ten-day trek through the South Island’s rugged wilderness. I’d bouldered up cliff faces to the tops of waterfalls, crossed rickety swing bridges suspended over rivers, and pick-axed my way atop an ice-blue glacier. You might mistake me for just another adrenaline junkie, but don’t be fooled. I was that girl who, in second grade, sat on a bench in a velvet dress and patent leather shoes, refusing to play ball because “my mom told me not to get my dress dirty.” 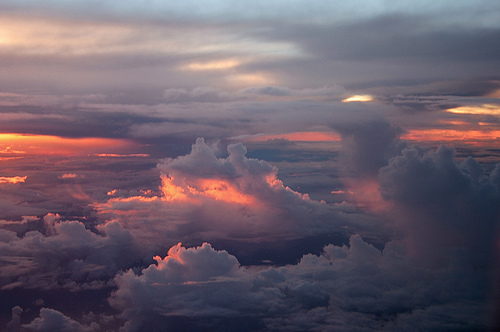 To Jump or Not to Jump?

Before traveling to New Zealand I had made a list of things I longed to experience in my lifetime but was too afraid to try. Skydiving was at the top. To put it plainly, I was afraid of falling. Speedily. From treacherous heights. In New Zealand’s back country, trudging under the weight of a forty-pound pack up to a mountain cave, my legs had wobbled like a newborn calf. My fingers constantly gripped the slippery hillsides like an old woman clutching her walker. Terror taunted me with images of my body crashing down, bones cracking onto sharp rocks below. By the trek’s end, I may not have overcome my fears, but I had edged one step closer. Plunging from a plane, my friend Stuart and I decided, would be another rite of passage.

Still convinced that contemplating skydiving must be listed in the diagnostic manual of mental disorders, I asked the sales representative, “Do you really plummet toward the ground at 120 miles per hour?”

“Oh no,” crooned a sweet young couple picking up their photos from that morning’s descent. Though their close-up pictures revealed grotesque facial features stretched like silly putty, they assured us that free falling 7,000 feet in fifty seconds felt more like “floating.” Dropping the last 5,000 feet in five minutes, with a parachute, would be an afterthought. The saleswoman patiently explained how we would each be safely strapped to a qualified tandem instructor who had performed this feat without incident numerous times before.

I considered the alternative offerings for the extreme sports devotee: I could rappel into a cave to raft its underground rapids, soar across a canyon by a connected cable, or “zorb” down a hill inside a huge plastic ball. Clearly, the decades-old tradition of dropping from the sky, my body attached to another by a few mountaineering clips, was the conventional choice. The risk that the parachute wouldn’t open seemed small compared to the likelihood of breaking my neck by dangling from a bridge with a rubber cord tied to my ankles. So Stuart and I signed on the dotted line and waived our rights to hold anyone responsible in the event of injury, dismemberment or death.

The following afternoon the bright sky was a cloudless canvas, refreshing after a New Zealand summer plagued by the most rainfall in recorded history. While Stuart prayed to the powers that be, my eyes searched the heavens for the distant plane and caught it flickering like a tiny mirror reflecting the sun. One by one, four colored dots emerged as if they descended through an invisible portal in the sky. In minutes they were magnified into rainbow parachutes, each growing exponentially larger before landing in the adjacent field. There, a six year-old boy in a space suit smiled and waved to his parents as if he’d just dismounted from the Dumbo ride at Disneyland. 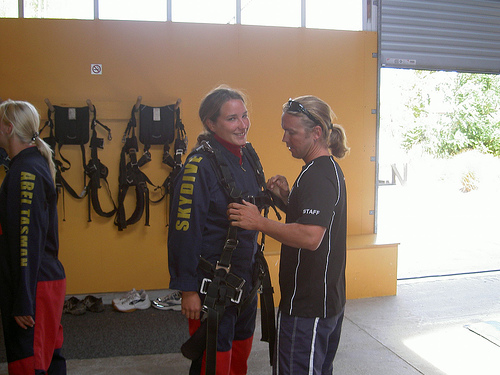 Inside the hangar, we donned florescent colored jump suits with soft, pointed helmets and oversized, plastic pink goggles. A harness was cinched so tightly around my thighs that I was forced to walk like a bowlegged chimpanzee. My tandem guide was a handsome young man whose face had not yet been weathered by his profession. With a Kiwi accent and a characteristically casual Kiwi attitude regarding anything death-defying, he quickly led us through basic training with only three essential instructions:

“Scared yet?” he added, with a mischievous grin.

Ironically, during the past twenty-four hours, while Stuart’s whole body broke out in hives I had remained completely calm. I should have been alarmed by the brevity of our preparations. I should have closely watched and questioned the man who was packing the parachutes. I should have gathered statistics. Instead, I walked like a zombie to the airstrip, passive as an anesthetized patient being wheeled into the operating room.

Stuart and I crouched across from one another on the floor of a plane so narrow it barely squeezed six passengers inside. Other than two tiny windows, the only indication of our ascent was an elevation watch, the needle hiking steadily like a blood pressure gauge.

8,000 feet and it seemed we could touch the purple peaks of the Remarkables Mountain Range.

9,000 feet and my tandem guide yawned as he fastened my back to his belly.

At 12,000 feet the metal door slid open with an ominous screech. Stuart looked at me with a final, foreboding plea as he scooted toward the exit. The next moment he was gone.

Awkward as conjoined twins, my guide and I crawled, legs first, to the open doorway. While he sat on the plane’s narrow ledge, I dangled just outside, attached to him like a baby in a front pack. For a fleeting moment I realized this God’s eye view could be my last. Short of death itself, skydiving seemed the ultimate surrender. There was no turning back. 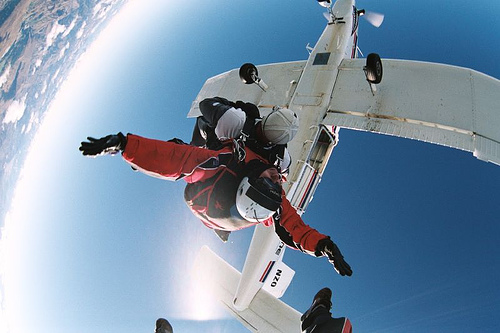 We somersaulted backwards into the boundless sky, catapulting through space with alarming speed. Like a swimmer tossed violently under the sea, all sense of order and form vanished as the earth, and my certain place in it, fell away. There was absolutely nothing to hold onto but my shoulder straps and faith. Instinctively I screamed and arched back against the soft body behind me. We were plummeting!

Within seconds, arms extended, we stabilized into “flying” position. Reaching a rate of 140 feet per second, we continued to free-fall for almost one minute. The furious wind made balloons of my flapping cheeks as my mouth sucked desperately at the freezing air. With my belly toward the ground and my guide weightless on my back, my mind struggled to organize the physical sensations of falling at terminal velocity while taking in the visual panorama before us. 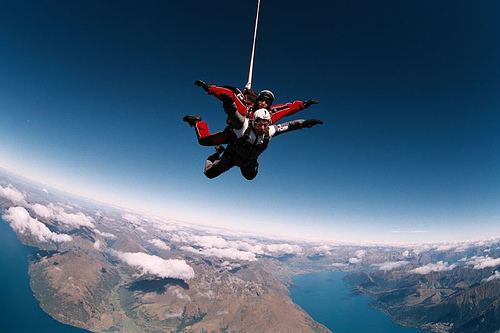 Miles below, Lake Wakatipu was a lazy sunbather stretching her limbs, the deep cobalt waters meandering between mountains. I drank in the liquid blue of the lake’s shallow edges that glimmered in the sunlight like aqua jewels. After the parachute ejected, briefly thrusting us upwards almost as suddenly as we had dropped, we drifted down. Queenstown’s configurations slowly crept closer. Surrounding craggy peaks hugged the lakeshore on one side and sprawled into hill-strewn meadows on the other.

Now hundreds of feet below, Stuart rolled in the grass like an ecstatic dog returning home. Hovering a final moment above the grassy field, we executed the landing of a small bird alighting gracefully upon a branch. I was a proud astronaut returning from space, delirious with relief and the exhilaration of success, for I had broken through the canopy of my fear by falling through the atmosphere without bursting on impact!

The challenges I face these days don’t require jumping from airplanes to overcome. New Zealand may have confirmed that I am no longer the girl who won’t get her dress dirty, but trying on anything new can still feel risky. When changing one’s orientation to the world requires a leap of faith into the unknown, I remember skydiving. Careening through the universe, maybe all you can do in the midst of falling is scream into the abyss. Then surrender your grasp and trust the ground to rise up to greet your safe landing.