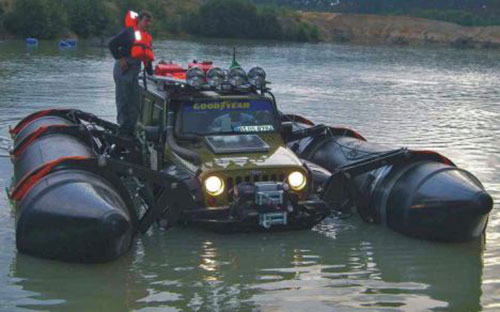 Paris to New York Via the Bering Strait

Transcontinental excursions are typically regulated to massive Russian tundras and African safaris. Adventurer Matthias Jeschke doesn’t think so: He’s planning a route from Paris, France to New York City using the Bering Strait which ancient humans used to migrate. Conceptually, this is to bring attention to global warming as the Bering Strait would no longer be passable if temperatures rose dramatically enough to melt the ice.

Traveling with three “eco-Jeeps” powered with alternative fuels, Jeschke plans to be the first expedition to make the journey in modern day history, and he’ll do so with carbon neutrality in mind.

The excursion is wildly dangerous, as it will require travel time to be within the dead of winter, braving permafrost and questionably solid ice. To be safe, the vehicles are equipped with massive floats in order to save the lives (and gear!) of the passengers if there were any tragedy involving thin, melting ice.

The expedition sets off in February, and there isn’t a time limit for the finish in New York. Trees are also planned to be planted in the spring under official supervision to offset the minuscule C02 emissions from the biofueled cars, in order to of course make sure that the only trace left by the expedition is in history.