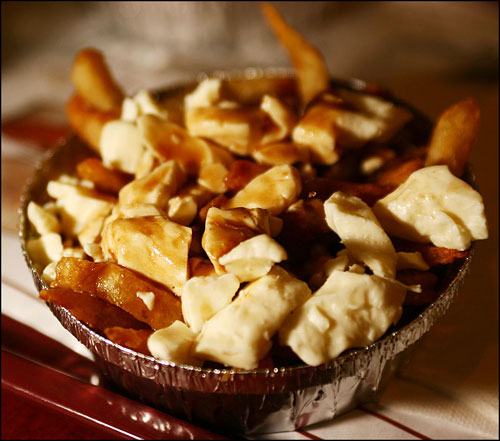 On to Montreal – Je Me Souviens!

K’s had one helluva birthday this year in what seems like a week-long celebration. Parties, booze, Yahtzee, staying up past 9:00 p.m. I think Lindsay Lohan showed up one night. It’s madness.

In the interest of continuing this ongoing bash, my gift to her this year is to take her to Montreal. Yes, of course it’s a gift for me too, but let’s not focus on that right now. I’m still basking in the warm glow of brownie points and her thanking me in various high school French class phrases that I only pretend to understand.

K and I haven’t been to Montreal since 2005 so a return visit was long overdue. I’ve made the four hundred mile trek almost every year since high school, but for me it’s always been about the nightlife. And the fact that the exchange rate was ridiculously tilted in the American visitors’ favor. While great at the time, it meant spending too much time and money in clubs and bars – living like a king for $100 a day on lavish Canadian wines, Ferraris and a harem of Quebecois cuties hanging on my every word. All this lasciviousness has led to a real vacuum of Canadian culture in my travel repertoire though.

In short: I’m a horrible Montreal tourist. There are so many things I’m ashamed to say that I’ve never done there. Here, a brief list of just a few that I’m looking forward to during our trip this weekend:

Sure, we’ve had great meals in Montreal. After all, you have to try pretty damn hard to find a bad meal in the city. But we’ve never eaten a purist French meal. And what’s more quintessentially Francophone than duck and fois gras?

Enter the decadent Au Pied de Cochon. I’m not quite sure how I first stumbled across it, but it’s been on my shortlist of must-try Quebec restaurants since. HungryMag.com had this to say about PdC:

[Chef Martin] Picard doesn’t gild the lilly. He dips it in every precious metal, encrusts it with gleaming diamonds, and for good measure, triple wraps it in hundred dollar bills. In Picard’s world, serving a pig’s foot on an island of mashed potatoes whipped with cheese curds, and then stuffing that foot with braised pork shank, wild mushrooms and foie gras is normal. Offering no less than twelve dishes with generous portions of foie gras is standard … [T]here can’t possibly be anything more decadent in the world, except of course poutine with foie gras, which they serve. If that’s not enough you can order the “Duo” which includes the poutine and a hamburger, also served with a fat seared lobe of Foie gras.

If you’re a foodie and that’s not exciting enough to tickle your culinary pink parts, I need to start hanging out with you more often.

No, I speak not of Pauly Shore’s hilarious breakout film debut, but rather the giant glass ball of an ecological experiment that:

… allows visitors to walk through replicas of four ecosystems found in the Americas:

Granted it won’t float every traveler’s boat. But I’m a geek through-and-through and it feels like the perfectly geeky and touristy thing to do.

Check out the official BioDome website. (That’s right: don’t settle for imposters! Accept nothing short of the genuine article!)

Eat what? Poutine is the unofficial dish of Canada and, short of stuffing raw lard into your gullet, perhaps the most unhealthy food on planet earth. It’s “a dish consisting of French fries topped with fresh cheese curds and covered with hot gravy (usually brown gravy) and sometimes other additional ingredients.”

Well that doesn’t sound so bad.

It is when you consider that the “other additional ingredients” to which they refer typically include bacon, butter, more cheese, fried fois gras, not fried fois gras, and just about anything dairy, meat and artery-blocking. God, I can’t wait! For a disturbingly thorough look at all things poutine, check out MontrealPoutine.com.

Take a Ride Down the St. Lawrence River

The surprising (to K anyway) coup de grÃ¢ce of our trip is boat riding the Lachine Rapids with Montreal Jet Boating. According to their website: “It’s the Old Port’s fastest attraction. Rodeo style jet boating with enough high-speed twists and turns to resemble a chase scene in a James Bond movie. Unbelievable!” If it only lives up to half the billing of their website and this badass video, it should be unbelievable indeed.

Anyone have any other recommendations? Even after visiting the “Paris of the West” (God, what an awful travel writing cliche) for almost ten years, I feel like I’ve barely scratched le surface!