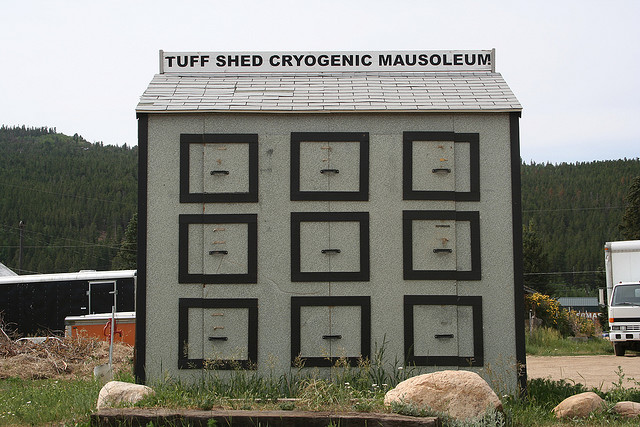 The concept of the festival dates back to 1989 when Grandpa Bredo Morstoel died in his native Norway. Four years later, his frozen remains were sent to Nederland where family members founded the International Cryonics Institute and Center for Life Extension (ICICLE).

According to Bo “Iceman” Shaffer, the man in charge of keeping Grandpa Moestoel well-chilled, The ICICLE is a “low-tech, backyard cryonics facility.”

Once a month, Shaffer hauls up to a ton of dry ice to a shed containing a stainless-steel sarcophagus to keep Grandpa Moestoel at an optimal -100 degrees.

When Nederland began to receive attention for the backyard cryogenics lab on the outskirts of town, residents decided to take things one step further.

“We were known as the town with the frozen dead guy, so the Chamber of Commerce thought, hey, why don’t we throw a festival?”

Today, the festival is jam-packed with events and activities that range from frozen turkey bowling to a polar-bear plunge into the icy waters of Chipeta Park Pond.

There are also several events that pay tribute to Grandpa Moestoel, like a Grandpa lookalike contest, a parade of antique hearses and a series of very popular coffin races.

During the signature coffin racing event, teams of “pallbearers” must carry an open coffin ”” complete with a fellow team member inside as the corpse ”” around an obstacle course of mud, snow and playground equipment.

I’m sure Grandpa Moestoel would be looking down with pride… that is if his life hasn’t been extended thanks to the groundbreaking work of ICICLE.