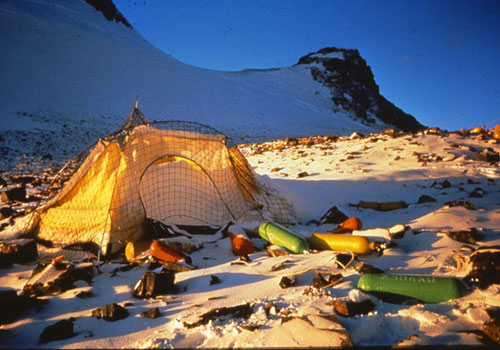 The dream of one day climbing Mt. Everest is a persistent fantasy in my grab bag of travel ideas. But, like many others, the thought of actually climbing same is more than a bit intimidating. Hence the popularity of Mt. Everest’s Base Camp as the end-of-the-line for many mountaineering hopefuls.

World Hum points us to an Outside magazine piece by Kevin Fedarko discussing the madness of “several Base Camp ‘boroughs,’ including ‘Luxuristan,’ with its massage tables and expansive DVD collection, and ‘Bunnystan,’ where National Geographic Poland editor and former Polish Playboy bunny Martyna Wojciechowska were preparing for a summit bid.” (the story is available online only via podcast)

Walt Disney himself would’ve been proud. The only thing missing is the annoyingly animatronic dolls, robotically sliding around the peaks humming “It’s a Small World After All“.

Should the proper financing come through on a future Disney Everest project, China’s making sure that every piece can be carted up the famous peak. How? They’ll pave the sucker. According to another recent World Hum piece:

The highway will be paved and follow an existing 67-mile “rough path” on the Tibetan side of Mount Everest to the base camp at 17,060 feet.

According to China’s Xinhua News Agency, as quoted in a story by the AP’s Scott McDonald, the highway’s goal is to “ease the Olympic torch’s journey to the peak of the world’s tallest mountain before the 2008 Beijing Games.”

Yeah, who gives two squirts about the environment when we’ve got bigger fish to fry? How will the world continue to spin upon its axis if there’s no convenient way to get the Olympic Torch to the top of Mount Everest?

There is a silver lining here though:

In ten days they collected 400 bags of garbage weighing 10 tons. The contents were mainly oxygen bottles, spirit stoves and tents discarded by climbers and the expeditions in recent years.

Mountaineers were the biggest contributors of garbage severely contaminating the area.

At least this road will allow garbage trucks easier access to the mountain to cart off all that waste. So that’s a plus.

I imagine schoolchildren, three generations hence, reading about the once great, beautiful landscape of the Himalayas. They stare longingly at a photo of Mount Everest “back in the day” – a time before the commercialization and subsequent environmental ruin of yet another of the Earth’s last untouched wildernesses.

Reader PJ comments on the same World Hum piece: “What kind of message is China trying to send? Development at any cost? What are they, stuck in the 1950s?”

I think you’re being a bit shortsighted, PJ. If you’ll excuse me, I need to finish my Senate petition to the U.S. government to pave the Appalachian Trail – all 2175 miles of it. People are just sick and tired of having to do all that “walking”. Who needs that hassle?

For shame. For shame …