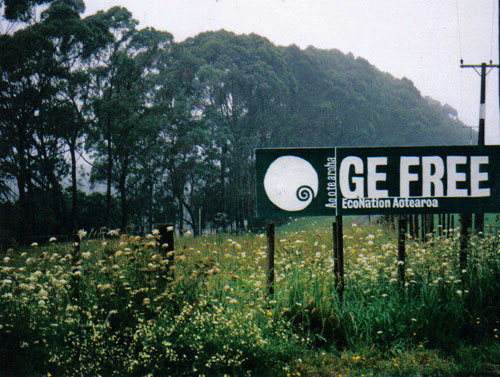 Hitchhiking through the Northland of New Zealand, I could have been winding along any northern California coastal road. It wasn’t only the wild flowers sprinkling the landscape with spring, or the sheep grazing on green hills, that reminded me of home. There were the numerous roadside cafés and fruit stands spilling out from the small towns. Even the tiny farms, peopled with storybook characters whose old-time hospitality was matched only by their love of the land, were reminiscent of my neighbors’ fields.

Sporting my pack and bandana, I waded up to my hips through a field of Queen Anne’s Lace. Dotting the landscape were limestone formations over five million years old and sacred to the Maori people. Two women journalists from Rural News picked me up near Whangarei. They talked enthusiastically about conservation issues and other hot topics like the movement to keep GE (genetically engineered) foods out of the country. They reported on the problematic possum, a pest numbering over 80 million, and its devastating impact on the native vegetation.

The women encouraged me to go to Opononi to see the last remaining Kauri stand. Slow-growing over two thousand years like my native Redwoods, most of the trees had been cut and their gum mined for linoleum and glue earlier in the century. Now only 4% of the original forest remained.

I’d come to New Zealand to revel in its wild beauty, but also to farm the land where sheep outnumbered people eight to one.

I’d come to New Zealand to revel in its wild beauty, but also to farm the land where sheep outnumbered people eight to one. For a small fee I received a booklet from Willing Workers on Organic Farms (WWOOF), listing over 700 farms that covered a country about the size of my home state. Generally agreed upon conditions of work trade meant laboring for four hours a day in exchange for room and board.

Home vegetable garden or a large market farm, each had in common its organic practices: using natural fertilizers instead of synthetic chemicals, weeding with hand tools instead of dousing with pesticides, rotating bio-diverse species instead of monocropping. What in the States were still considered “alternative” farming methods was just mainstream in Aotearoa (Maori for “land of the long white cloud”). 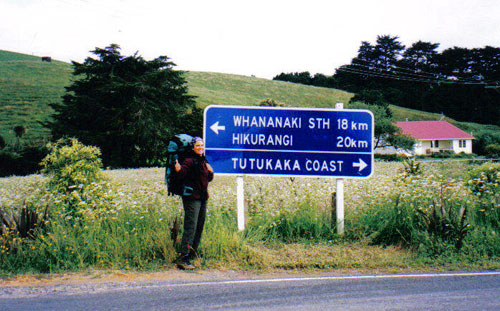 In Matapouri, at the end of a long gravel drive, sagged a dilapidated little grey house whose roof was overcome with wild roses. The 100 year-old building, once a post office and later a general store, sat on acreage set back from the beach. Erica, a petite woman with an artist’s hands, greeted me warmly and introduced me to her two teenaged sons, who glowed with the golden skin of a youth spent freely outdoors. The boys had learned to surf from a young age, hiking over the dune with their boards against their hips.

I stayed with Erica for three days, listening to waves crash while I weeded her garden adorned with mosaics she’d painstakingly made. We worked quietly on the little plot overgrown with thorny things, uncovering hidden treasures. A rose bush, an artichoke. Each layer peeled away revealed another world wafting in the scent of rosemary, mint or fennel. Ruby the pig always snorted over for some good weeds to eat; in return, she gave us sloppy green manure – an offering to the plants.

In the evenings over tea, Erica and I visited before I retreated to the solitude of my caravan covered in stars. At first we discussed political issues like women’s plight, racism and forced assimilation. As we grew closer, Erica talked about things dearer to her heart: her family commitments, her children, her passion for her art. She told me about an Australian Aboriginal friend who stayed off the grog for nine years when she realized her talent as an artist and fueled all her sorrow into painting. 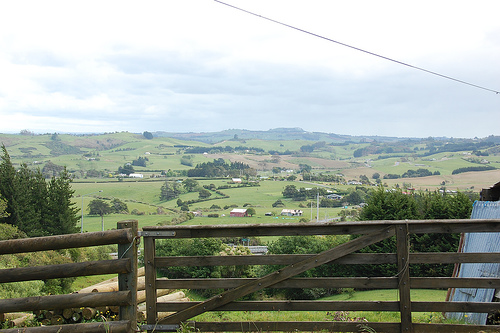 One afternoon Erica took me to the family’s ancestral land passed down to her husband, a part-Maori fisherman working far away at sea. She confided that this modern life wasn’t always conducive to sustaining relationships, and that the connection to the land was vital. I envied her investment in this place that bound her to her children, giving them a vision for the future while grounding them in their past. Before parting, Erica showed me the boldly colored prints she made of plants, birds and sea. I purchased the purple morning glories and the silvery-sage artichokes, so that I might remember what she shared with me.

Soon I caught a ride from Nicola, a young mother of two sons who lived in an eco-village nearby. She told me about her five year-old who wrote letters as well as any child twice his age. She attributed it to his using his mind creatively and never watching t.v.

Nicola thought nothing of my hitching around the northland, but when I told her I’d driven my car and camped all the way around the U.S. she remarked, “What a brave person you are!” She wasn’t the only one to share an image of the States as a place full of gun-toting maniacs.

Curled up like a cat in the sun, listening to the almost-silence of insects, I awoke to glimpse horses grazing through the lace curtains.

That afternoon I fell asleep in a turquoise caravan at a commercial-sized market farm in Keri Keri. Curled up like a cat in the sun, listening to the almost-silence of insects, I awoke to glimpse horses grazing through the lace curtains. I had expected to begin work that day but the owner Marty insisted, “Make yourself at home! Have a cup of tea!” (I was just getting used to this Kiwi notion of tea for all occasions. When a visitor comes over unannounced, or it’s mid-afternoon and you feel a bit lazy – “Let’s have tea!”) That week he’d announce tea time twice a day in the fields and our group would gather under the trees for a welcome break from our hoeing and digging.

Originally a conventional farmer, Marty switched to bio-dynamic methods and now spearheaded the campaign for a “GE-free NZ”. He breathed his yoga practice into his daily life, commanding attention with little effort and delegating farm work with grace. Ever patient and always kind, when I asked him for a band-aid for my blistered hand he gently placed it across my palm and kissed it like he would a child’s wound.

The following week I planned to visit someone in Kaitaia who had built her own home of natural materials. I’d seen exquisite photos of the sandstone-colored adobe walls, rounded and inlaid with mosaic swirls. But I waited for an hour in the rain for the bus that never came. Thus far everything had fallen into place, once I’d left Auckland and my obsessive planning behind.

Just as doubt and disappointment began to creep in, a woman drove past smiling and waving frantically. She made a u-turn that almost slammed her into oncoming traffic and exclaimed, “Get in!” In the front seat next to her was a large bucket of sunflowers. She bore a striking resemblance to Ruth Gordon’s character in my favorite film Harold and Maude. Magi didn’t seem at all surprised that we’d met and invited me home for tea. So I stuffed my pack into the backseat next to Kevin Daniel Patrick O’Brien from Boston and altered my plans. 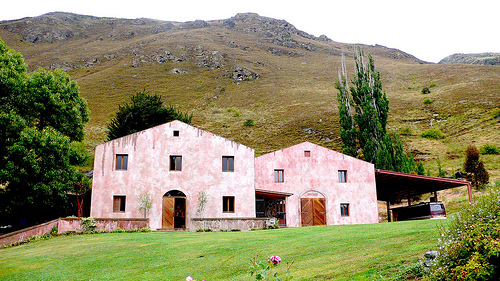 After the terrain of the farm where mud and muck crept under my nails and into the crevices of my skin, Magi’s home filled with flowers and her daughter’s paintings of nudes swimming in brightly colored spirals was a welcome change. Though there’d been comradery in the labor of farm and kitchen, Marty’s house had a transient quality while Magi’s was a mother’s home. I’d loved working the soil, the way the grass mulch steamed in my hands on a cold morning amidst the fresh and fermented smells of growth and decay. But after long days hauling wheelbarrows of manure I was ready for a respite in her clean, quiet space.

Magi was filled with a vibrant energy much younger than her sixty-two years, but a bout with cancer had etched deep wrinkles into her face like Maori moku (tattoos) telling of her life. She had a witch’s cackle and giggled with mischievous eyes. Quick with opinions and full of stories, she seemed eager for listening ears. At night we’d wash the dishes and discuss natural healing, gender, violence and spirituality while the men poured over maps and exchanged climbing tales.

One evening we made a feast for the birthday of her friend Cyril. He was one of the last remaining coopers in a lost trade of handcrafting wine barrels. By regulating the amount of heat from a fire, Cyril bent and seasoned the wood to a perfect shape. He lived in his truck under the barrel-top caravan he’d fashioned for it. Cyril almost cried when he saw the chicken and roasted potatoes encrusted with herbs, salads and cakes decorated with edible flowers — all from Magi’s immaculate gardens abundant in blooms.

Some mornings I helped her clear storm ditches from the flooding rains. Most afternoons we sewed sachets and crushed lavender, our movements resembling women rolling out tortillas. But after so many days filled with domestic tasks I was ready to dig in the dirt again and we parted ways.

I found a ride from an Englishman in his mid-forties who loved Las Vegas. He’d been traveling since the untimely death of a friend two years before, which gave him the incentive to live his life fully instead of wait for retirement. I admitted I wasn’t quite sure where I was heading next, nor for how long.

“Go with the wind,” he advised. “You just never know what’s ahead.”