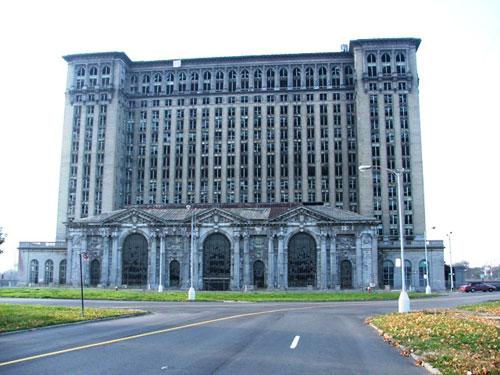 Tim Leffel points us to this WSJ article about the ghost skyscrapers of Bangkok.

BANGKOK — One recent steamy afternoon, a shirtless man named Nop tossed out chunks of putrid meat for the dozen stray dogs that share his home, an open-air encampment inside the unfinished 47-story Sathorn Unique tower.

Ten years ago, Sathorn Unique was destined to be one of the city’s glitziest addresses. Today, its Corinthian columns and four-story arches are nearly lost amid a tangle of trees and vines. Although workers completed the building’s basic structure all the way to the top, its concrete shell starts to peter out about 20 stories up, leaving exposed metal and a half-finished dome on the roof. Steel bars jut out in all directions and mounds of refuse litter the grounds. Inside, two out-of-service escalators climb to nowhere and the smell of urine is overpowering.

But at least, Nop says, “the building won’t collapse.”

Chris over at TravelHappy.info wrote about this story a month or two ago (and by chance followed up on it again last week). I find the whole concept fascinating.

It’s hard for us to imagine this happening in a high-rent district like New York, London, or Hong Kong, but apparently there are more than a dozen complexes around Bangkok where the developer just walked away and said, “Never mind.”

It reminds me of Detroit, Michigan – a very surreal urban environment that K and I visited a few years back. Since the 50’s, Detroit has lost more than half its population and claimed many now infamous abandoned buildings in the process (a fact that is brilliantly satirized in The Onion‘s latest piece, Detroit Sold For Scrap). Touring the city is reminiscent of walking through a post-apocalyptic William Gibson cyber-novel, only with less people. It’s a landscape that’s uneasy with a pleasant, otherworldly quality about it.