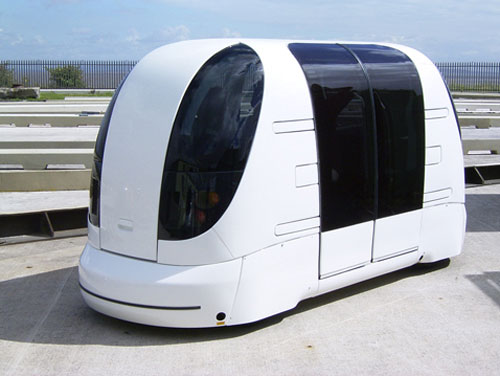 London’s Heathrow Airport is set to launch a Personal Rapid Transport System that will make it faster for business class passengers to shuttle between their cars and check in terminals. The fleet will consist of 18 pods that will glide on specially installed raised guide ways at 25 mph. The system is scheduled to begin functioning when Heathrow’s Terminal 5 opens in two years time.

Shaped like futuristic space capsules, the advantages these driverless pods offer are numerous for London’s transport system and passengers — no queues, no grumpy drivers, and no emissions. Here’s how it works — you go to a hub where you get on one of these pods (or you can call for one); use a touch screen to denote your destination; then sit back as you’re taken non stop along a guide way that uses lasers installed in the vehicles to move it along.

Each pod seats four passengers, and is perfect for groups of people traveling to the same place. An additional feature is security – no sharing a near empty bus with a couple of strangers.

The only hitch – the PRT needs a special guide way which will have to be installed separate of the roads and the mass transit system. It’s for this reason that it will be an additional option that will support existing systems, rather than replace them.

For now, all eyes are on Heathrow to see if all goes well with the system when it rolls out in 2009. If it’s a success, Britain plans to introduce it in other areas around the country. Other countries too are looking at it with interest to replicate the model in their cities — especially the Gulf states.