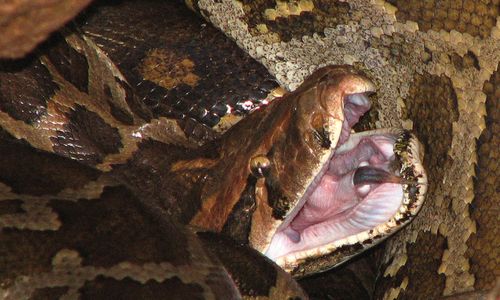 The headline sounds scary enough: “Invading giant snakes threaten U.S. wilderness areas.” And it is pretty scary. A new report describes how five giant non-native snake species are destroying the south Florida ecosystem, having been released into the wild by the incandescently stupid pet owners who tried to raise them. Several of the species have established sustainable breeding populations, because really why wouldn’t they:

There could be tens of thousands [of Burmese pythons] in the Everglades, a wildlife refuge that is home to the Florida panther and other endangered species. The Burmese python and four other non-native snakes — boa constrictors, yellow anacondas, northern and southern African pythons — are considered “high-risk” threats to the health of U.S. ecosystems because they eat native birds and animals… the boa constrictor and Burmese python have already established breeding populations in south Florida and experts have found “strong evidence” that the northern African python may be breeding in the wild as well.

This article doesn’t even get into the best part about the pythons that are slithering around south Florida. For that you have to go back to some news that was floating around last month. Again we’ll start with the headline and from there: “Hybrid man-eating pythons? Florida is on alert.”

It turns out that Burmese pythons, for all that they’re huge, don’t really go after humans. In that sense they’re a – relatively – gentle python species. African rock pythons, on the other hand, are unstoppably vicious and have a taste for human flesh. Luckily they’re much smaller than Burmese pythons.

Here’s where things get fun. Burmese pythons and African rock pythons have been known to interbreed in captivity, producing gigantic angry snake hybrids. They’ve never been found interbreeding in the wild, not least of which because Southeast Asia is a full continent away from anything that might live in African rocks. In fact the only place on earth where we’re pretty sure there are wild breeding colonies of both python species is… Florida.