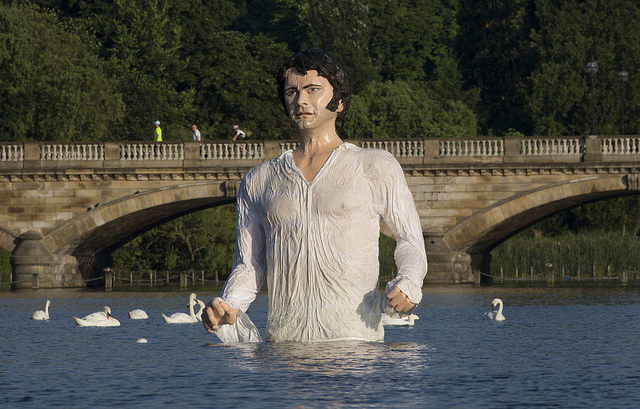 The scene from Pride and Prejudice where Mr. Darcy emerges from the water is a memorable one. Just ask Bridget Jones. Now it has been supersized.

A giant sculpture of the fictional Mr. Darcy was created to promote a new Drama television channel in the UK, and he’s expected to pop up all over the place. On his first outing he surprised swimmers and other visitors to London’s Hyde Park when they found him in his iconic stance emerging from the water of the Serpentine.

His week in Hyde Park is almost up, and then he’ll move on to Scarborough for a bit. After that the statue of Mr. Darcy will be installed at Lyme Park in Cheshire, where the scene from the 1995 Pride and Prejudice television series was filmed, and it will be on display there for six months.

Find out more about this from LondonLovesBusiness