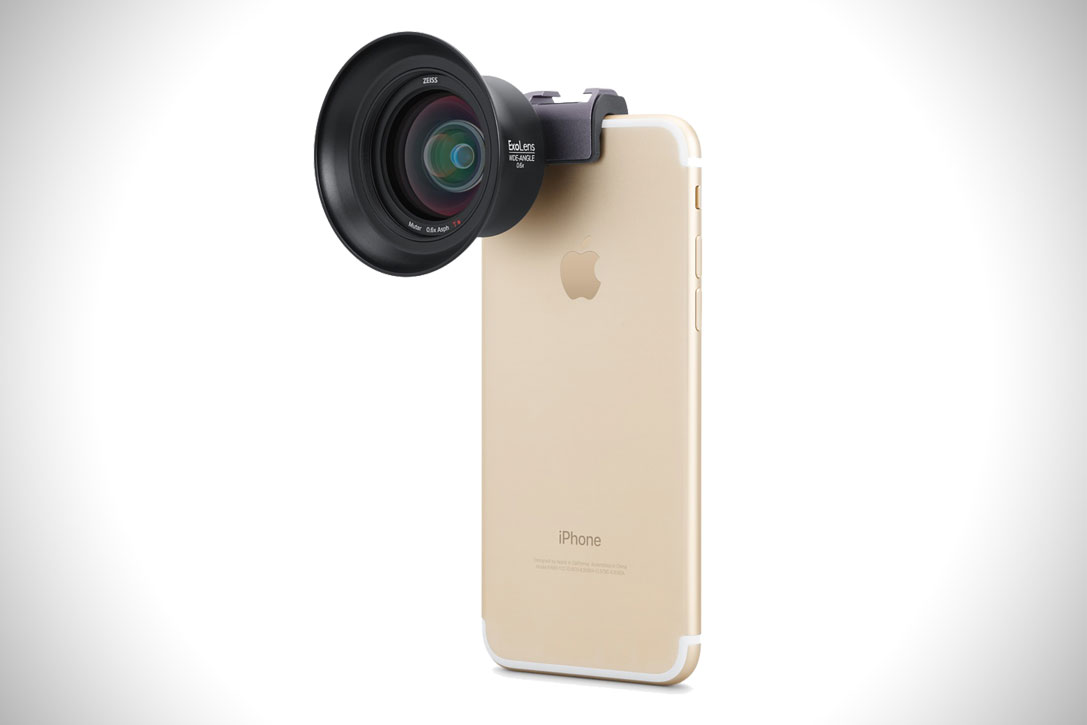 We’ve long surpassed the point where our phones are just phones (honestly, when was the last time you made an actual phone call from yours?). For travelers, one especially amazing advance in smartphone tech is in their cameras. If your smartphone was manufactured in the last three years, you probably don’t even need to bring a point-and-shoot camera on your journeys anymore.

But, at least for now, travel photographers still need to pack their bulky digital cameras and all the accompanying wires, batteries, and, of course, lenses. Which is why I’ve been interested in the ultra-portable, add-on smartphone lenses cropping up in the last two years.

I’ve tried many such kits and most have more drawbacks than conveniences (mainly issues with compatibility and/or poor image quality). So, the new ExoLens (with Optics by ZEISS) Wide Angle Lens Kit piqued my interest. On its face, it looks like the perfect walk-around lens for travelers and the ZEISS brand name is a damn good one (the fact that it’s in all-caps shows they mean business).

The good folks at ExoLens were kind enough to send us a sample. Here’s our first look …

What is the ExoLens PRO Wide Angle Kit? In the company’s own words:

Virtually distortion free, the ExoLens with Optics by ZEISS Mutar 0.6x Asph T* Wide-Angle Lens has exceptional edge-to-edge contrast and stunning picture quality. This powerful combination of superb lens and finely crafted Edge mount lets you capture even greater depth and beauty in all your iPhone photos. That’s why ExoLens has joined with ZEISS to offer these best-in-class lenses specifically designed for mobile photographers.

Most add-on smartphone lenses I’ve tested previously are priced like toys ($75 or less for a full, three-lens kit), but they often feel like toys too. In stark contrast, the first thing I notice after unboxing the ExoLens PRO kit is that it’s heavy. It looks and feels like a shrunken-down DSLR lens — like it can take a beating (not that I’d recommend it).

In everyday use, I found this to be mostly good. But, the weight of the professional glass also unbalances the iPhone when picture-taking in a way that I was never able to adjust to. It feels awkward and ungainly. Although, I believe that’s more a function of almost any well-made add-on lens that weighs as much as (or more than) the smartphone itself. I found the GRIP&SHOOT pistol grip/mount was good at rectifying this problem.

Also, unlike other one-size-fits-most kits, the ExoLens PRO kit features purpose-built Edge brackets for specific camera models (the kit includes brackets for iPhone 7, iPhone 7 Plus, iPhone 6/6s and iPhone 6 Plus/6s Plus). That means a very, very snug fit. While this is mostly a good thing, in my case it meant that I had to remove the screen protector from my phone. Even those extra few millimeters proved too thick for the lens mount to fit correctly. It’s not an ideal setup for someone who wants to mount/remove the bracket on a regular basis. It’s a minor (or nonexistent) point for some users, but it was an issue for me.

Yeah, yeah, yeah … but what about the picture quality? My minor design gripes aside, the image quality is hands-down the best I’ve seen of any bolt-on lens. My photos are bright and — true to ExoLens’ claims — almost completely distortion-free and offer excellent edge-to-edge contrast throughout the frame.

A few additional miscellaneous features to like: an integrated cold-shoe mount allows for easy attachment of audio, lighting, and other accessories. A sturdy, protective lens hood and lens cap are also included to prevent lint build-up and smudges. And the included soft case is large enough to toss the entire kit inside and take it with you anywhere.

Available now direct from Apple for around $200 USD. Amazon often has it for a few dollars less.