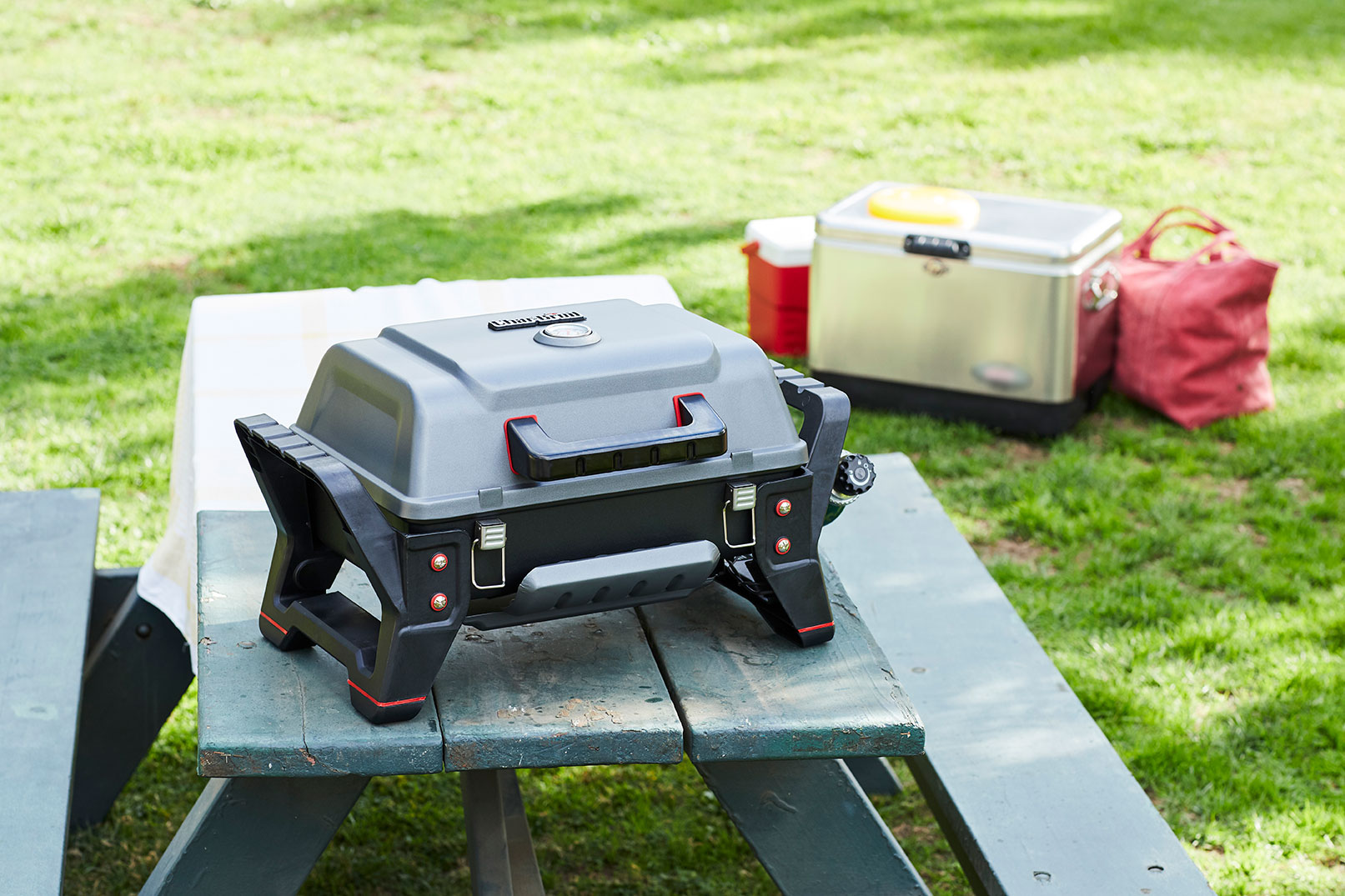 Earlier this year, we covered thousands of miles along the U.S. East Coast. We (including Lizzi the Cat) were essentially living out of our 4Runner for much of the road trip. So, it was critical that everything we packed in the truck had a specific, functional purpose.

Since we love to eat, our kitchen setup was critical. More so than just about anything else we took with us. It’s especially important since not everywhere we spent the night had a decent cooking setup. So, we learned very quickly the importance of a portable grill.

As we’re gearing up for fall road-tripping season, Char-Broil was kind enough to send us a sample of their nifty, super-compact Grill2Go X200 Portable Gas Grill — a grab-and-go grill with the latest infrared cooking technology. Here are our impressions …

With features that include a durable die-cast aluminum construction, push-button ignition, lid-mounted temperature gauge and the TRU-Infrared cooking system for no flare-ups, it’s designed to be sturdy and convenient, so you can set up your grill with you when you’re tailgating, camping or on the beach.

Straight out of the box, the first thing I noticed is that the X200 grill is built well. It’s very solid. At 21 pounds, the cast aluminum and stainless steel frame feels heavy, though not too heavy — still easy enough to carry out of the rear hatch at the campsite. You certainly won’t be lugging this into the backcountry, but it’s an ideal accompaniment to car camping.

The cooking surface is a sizable 200 square inches (hence the “X200” moniker) which is more than enough room to prepare dinner for two. For reference, that’s enough room for about two slabs of baby back ribs or eight burgers or a handful of sizable steaks/chicken breasts.

The real draw with the Grill2Go X200 is Char-Broil’s patented TRU-Infrared cooking technology. If you’re unfamiliar, it’s the new hotness (get it?) in grilling. Traditional gas- and charcoal-fueled grills cook at relatively modest, oven-like temperatures (around 500 degrees). They rely on the hot air inside the grill to do most of the cooking. Infrared grills emit much higher levels of infrared heat and are therefore able to cook at substantially higher temps (in the neighborhood of 1000 degrees F or more). These, including the X200, use ceramic or metal plates to transfer that energy/heat directly to your food. The best part: no hot air means less dried-out (read juicier, more delicious) food.

The Grill2Go X200 comes almost entirely assembled. Simply pull it from the box, attach a few little bits and bobs, and your standard LP gas cylinder. You’re good to go. Plus, the built-in, push-button ignition requires no batteries and is dead simple to start. Bottom line: from cutting open the box for the first time to grilling should take less than ten minutes.

One last note: I highly recommend springing for the optional carrying case. It’s lightweight but sturdy, and the tear-resistant exterior ensures it’ll last at least as long as the Grill2Go itself. Plus, it adds a bunch of storage loops and pockets with enough space to stow two 16.4-ounce LP cylinders.

The Char-Broil Grill2Go Portable Gas Grill is available now directly from the manufacturer where it retails for USD $149.99.