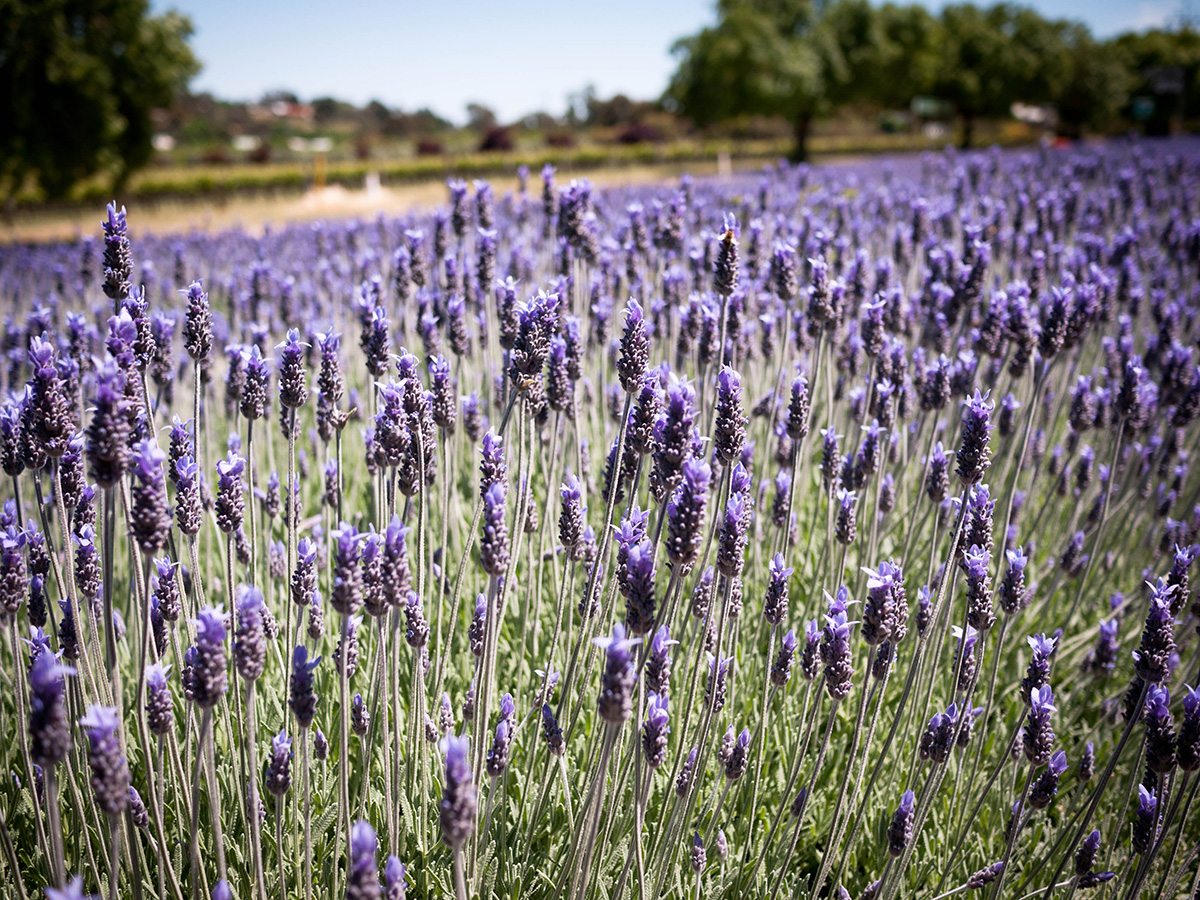 Just Another Day in the Barossa Valley: Wine for Breakfast, Hunting for Kangaroo and Dining at South Australia’s Best Restaurant

If we’ve learned anything on this trip thus far, it is that the human palette reaches peak sensitivity just after we awake every morning. And, let’s be honest, that’s an excellent “scientific” reason to tip back a glass (or six) of Shiraz at ten o’clock in the morning.

After yesterday’s seemingly endless array of wine-tasting in the Barossa, we’ve still only scratched the surface of what this centuries-old region has to offer. I’m still reeling from forty-eight hours of wine, kangaroo encounters and epic scenery ”¦ oh and the smallest touch of jet lag. But a new day of viniculture and scenic grandeur awaits, so we’re off to the day’s first tasting.

Making Our Own Blend at Penfold’s Winery

Dating back to 1844, Penfold’s Winery is one of the oldest and perhaps best-known wineries (at least stateside). It’s no surprise then that they offer one of the most unique and educational wine-making experiences in the Barossa Valley — Make Your Own Blend. It’s a lesson in understanding how distinct grape varietals (Shiraz, Grenache and Mourvedre) combine to create countless blend variations. 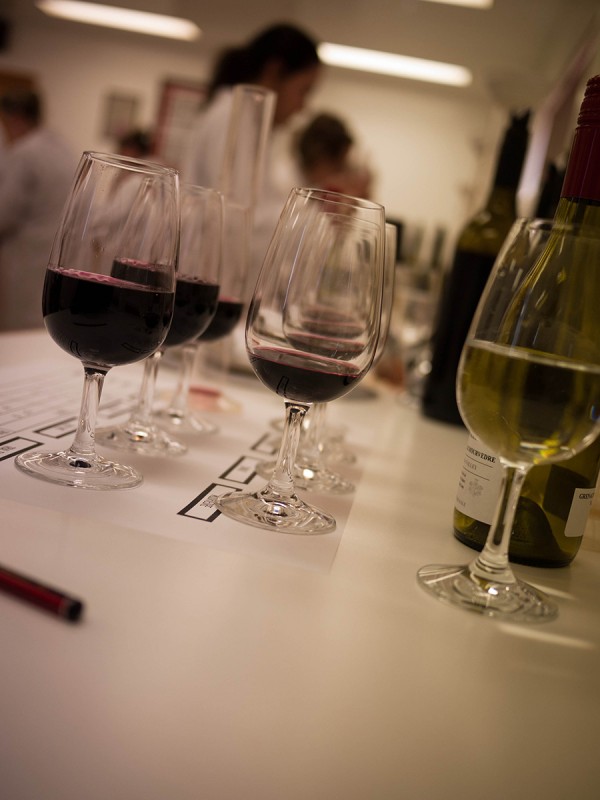 After a brief orientation in the lobby, we don white lab coats and pose for a bevy of photos whilst doing our best Mr. Wizard impersonations. It’s a fascinating and satisfying experience, blending to suit our own personal taste, and even more fulfilling to take the personalized bottle home. There’s something charming about holding a bottle of wine with one’s own name imprinted on the label. I’m half-tempted to procure a wine closet just to store it in; and half-tempted to impetuously down it in the parking lot.

The Barossa Valley from Above

On the way to today’s lunch break, we detour to Mengler’s Hill Lookout – a certified “scenic overlook” that provides one of the most stunning views of the Barossa from above. Our tour guide, Ralf, estimates that one can take in a full quarter of the entire Barossa Valley from this vantage point. It’s a testament to what a great overlook it is and it speaks to just how vast this region truly is. 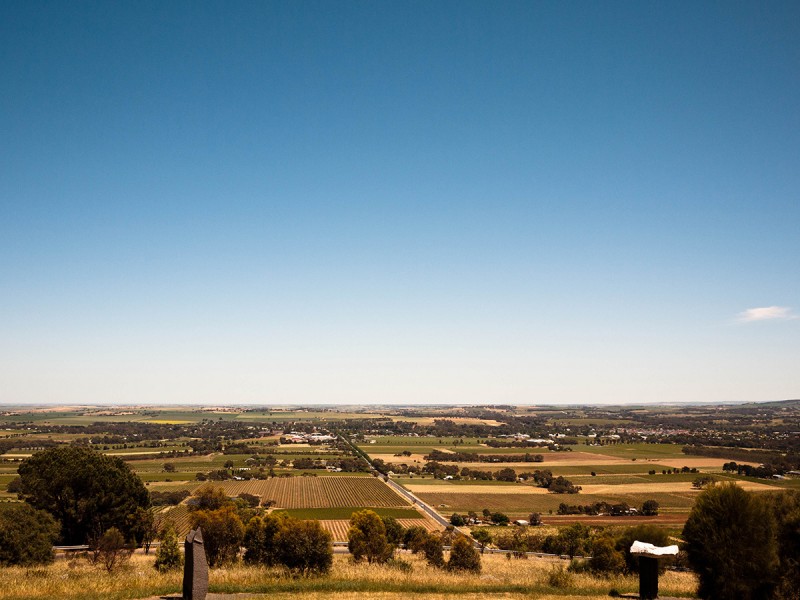 It stretches quite literally for miles in every direction. Lush hills covered in Salvation Jane blanket the entire valley in a sea of purple. 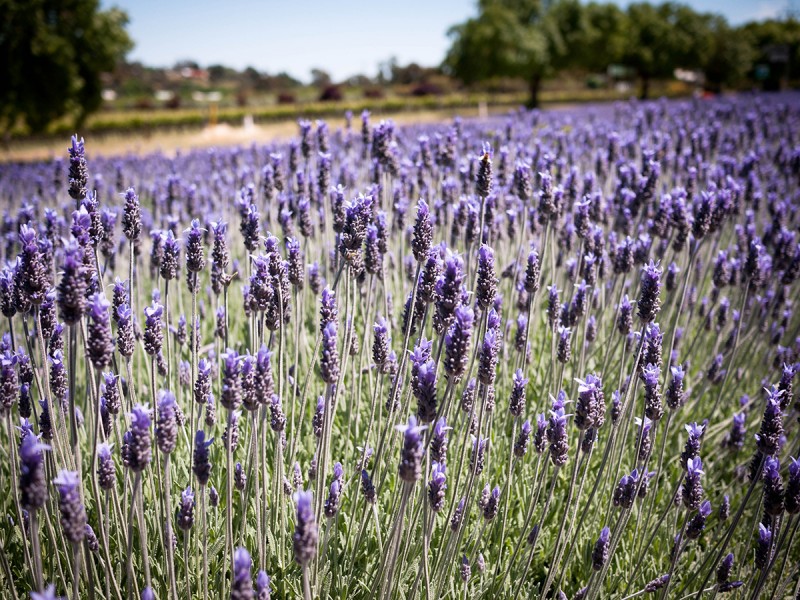 Today’s highlight will no doubt be lunch at Vintner’s Bar & Grill, who specialize in dishes inspired by regional Barossa produce. But I’ve also been told this is where I can sample the best, most tender kangaroo meat this side of the Pacific. As a dyed-in-the-wool carnivore, I never turn down a new and exotic meat. I’m almost giddy. Ralf tempers my impatience by saying that the chef only serves the kangaroo if the day’s cut is up to snuff — perfect color, tenderness, etc.

Browsing the menu proves an exercise in indecisiveness. We opt for a tasting of sorts: VBG dukkah and VBG fries. The latter has been described as a “destination food” — the kind of snack one drives fifty miles out of the way just to taste. Celebrity chef, Tom Colicchio, described them as the best he’s ever had and, true to his word, they don’t disappoint. 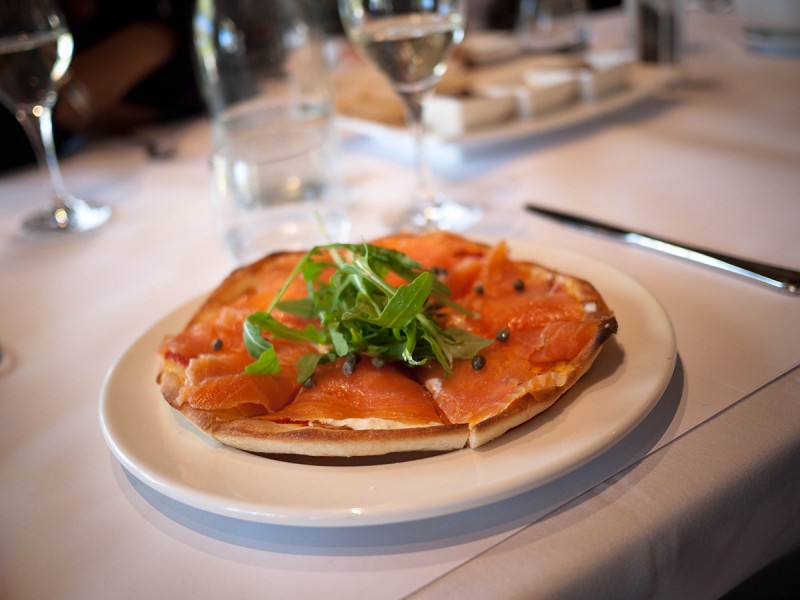 Sadly, my kangaroo lunch was not meant to be as the chef has 86’ed the option from today’s menu. Not up to spec, I guess. For the main event, I instead opt for the Smoked Salmon and Potato Pizza. It’s light and fresh with but a few delicate, perfectly paired ingredients.

Torbreck Vineyards: A Schooling in Old Growth Vines and Wines 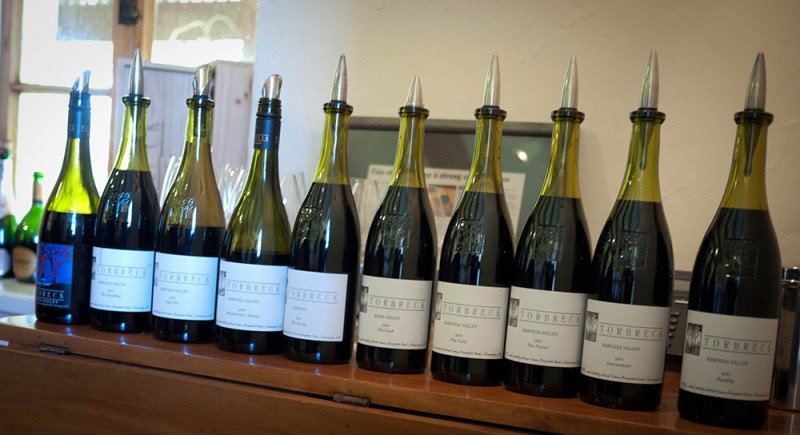 Our second vineyard stop takes us to Torbreck Vineyards for a private tasting with cellar door manager, Scott Trezise. His knowledge of the Vineyard’s offerings in particular and viniculture in general is staggering. I have never personally heard someone speak so eloquently and at such length about wine. For more than an hour, we sat like school children in awe of the breadth of his expertise.

Torbreck is one of a few lucky vineyards never hit with phylloxera — one of the most destructive insect pests to vineyards. Without delving too much into entomology, this translates to Torbreck boasting some of the oldest growth vines — some more than 150 years old – in the whole of the Barossa. And the corresponding wines are typically part of their $5 tasting flight of a dozen or so wines. Some are even $100+ bottles — a rare treat at any winery, let alone one in the Barossa. Don’t miss their Shiraz — truly some of the best we’ll sample in the whole of South Australia. 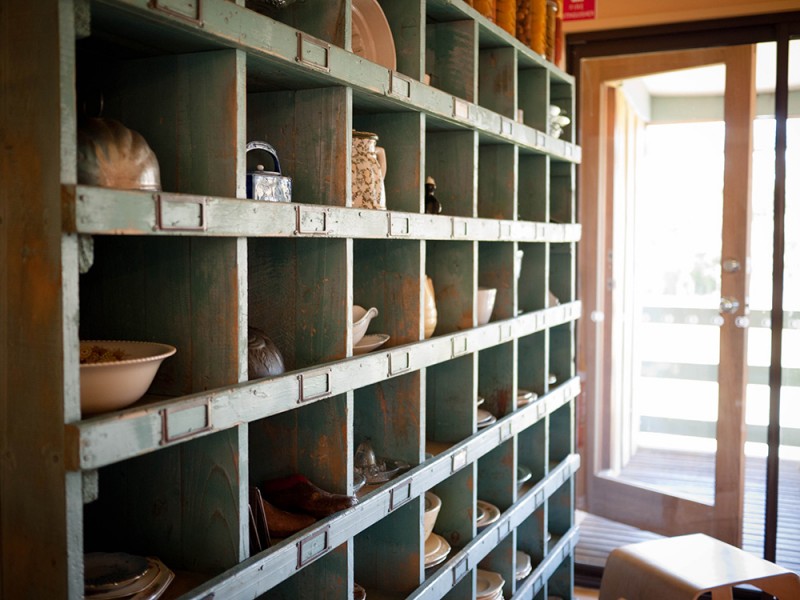 A highlight for any culinary adventurer in the Barossa is a visit to Maggie Beer’s Farm Shop. For stateside folk, Beer is like Australia’s Martha Stewart or Rachel Ray, if you like. The Farm Shop offers tastings and sales of her full range including limited edition seasonal produce. Customers can browse her personally selected regional specialty goods, purchase one of her signed books or simply sit back and take in the view. Culinary enthusiasts, don’t forget to bring home a bottle of verjuice — an acidic juice procured from unripe grapes and used in all manner of gourmet foods. 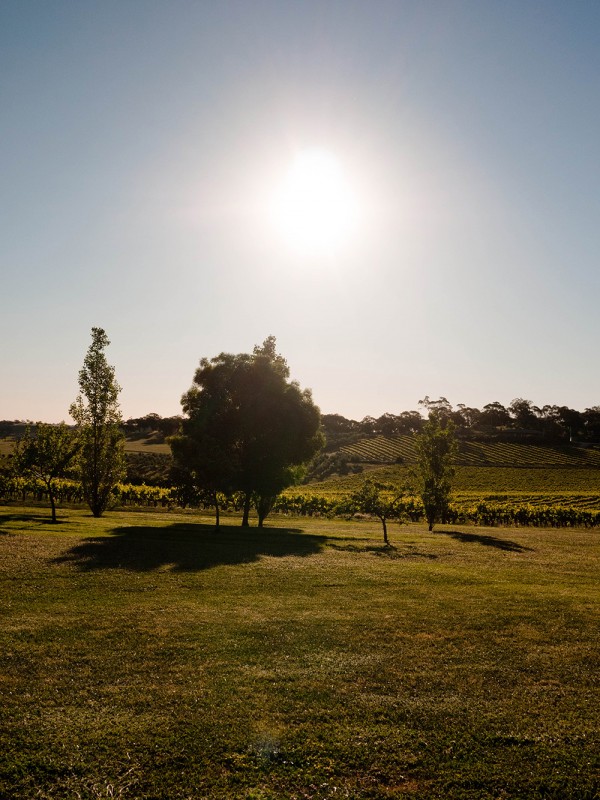 Sunset Over The Barossa, South Australia

Dinner and Decadence at The Louise

We break early this afternoon for our check-in at The Louise — a modern, luxury retreat set in the heart of the Barossa. Amenities at this legendary hotel are legion: private terraces with a 180-degree view of the Valley, gated courtyards, contemporary furnishings and spacious ensuites. The showers even have showers. Seriously: many of the suites feature massive indoor showers with doors leading to a second, outdoor shower. The requisite rubber ducky bath toy almost tempts me to take a soak for the first time since I was knee high.

Entrance to The Louise

With a few hours to relax before dinner, I plant myself firmly on the outdoor porch. I contemplate helping myself to the bottle of complimentary port, but settle on a bottle of Cooper’s. I gaze, quietly, at the endless fields of grapes, watching magpies and sheep graze for hours. It seems nearly impossible to capture this view in a single photograph.

A few relaxing minutes turn to hours and soon it’s time for our last meal in the Barossa. The Louise’s onsite restaurant, Appellation, has been called one of the best restaurant in the whole of Australia. That’s a mighty tall order to live up to. In their own words:

Appellation continues to be ranked in the nation’s top 50 restaurants as listed in the Gourmet Traveller Restaurant Guide each year since 2007 (currently with two stars and three goblets), and has received multiple awards in recent years including:

I have to agree with their own assessment that Appellation is “a compelling reason to visit the Barossa.” Indeed. The food is, in a word, amazing. The sweet potato cake – fragrant spiced roasted sweet potato, pepitas, and almonds with cumin dressing – is exquisite. I still wake up in cold sweats fearing I may never taste their cauliflower soup just one last time. And the pinnacle of my personal dining experience was the duck tasting plate with a sherry pairing – perhaps one of the top five courses I’ve ever tasted. 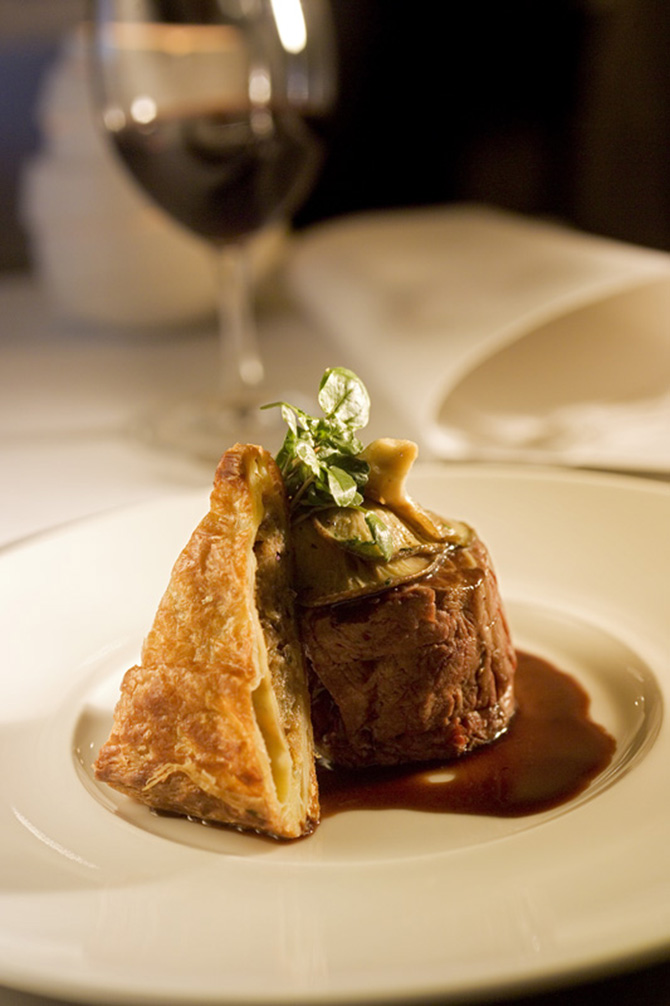 Three hours and countless courses on, it is time to retire for the evening. We depart Appellation plump and happy. This, only our second night in the Barossa, will sadly be our last. Walking back to my suite at The Louise, it’s impossible not to feel dwarfed by the night sky. Without light pollution here, the stars are stunning; like walking through a planetarium with navy black curtains touching both ends of horizon.

It’s a humbling, yet perfect finish to our brief stay in this, Australia’s most illustrious wine valley.

Oh, and if you haven’t yet entered to win Unlimited Flights to Australia for One Year ”¦ well, why not? It’s simple and doesn’t take more than a minute to enter!