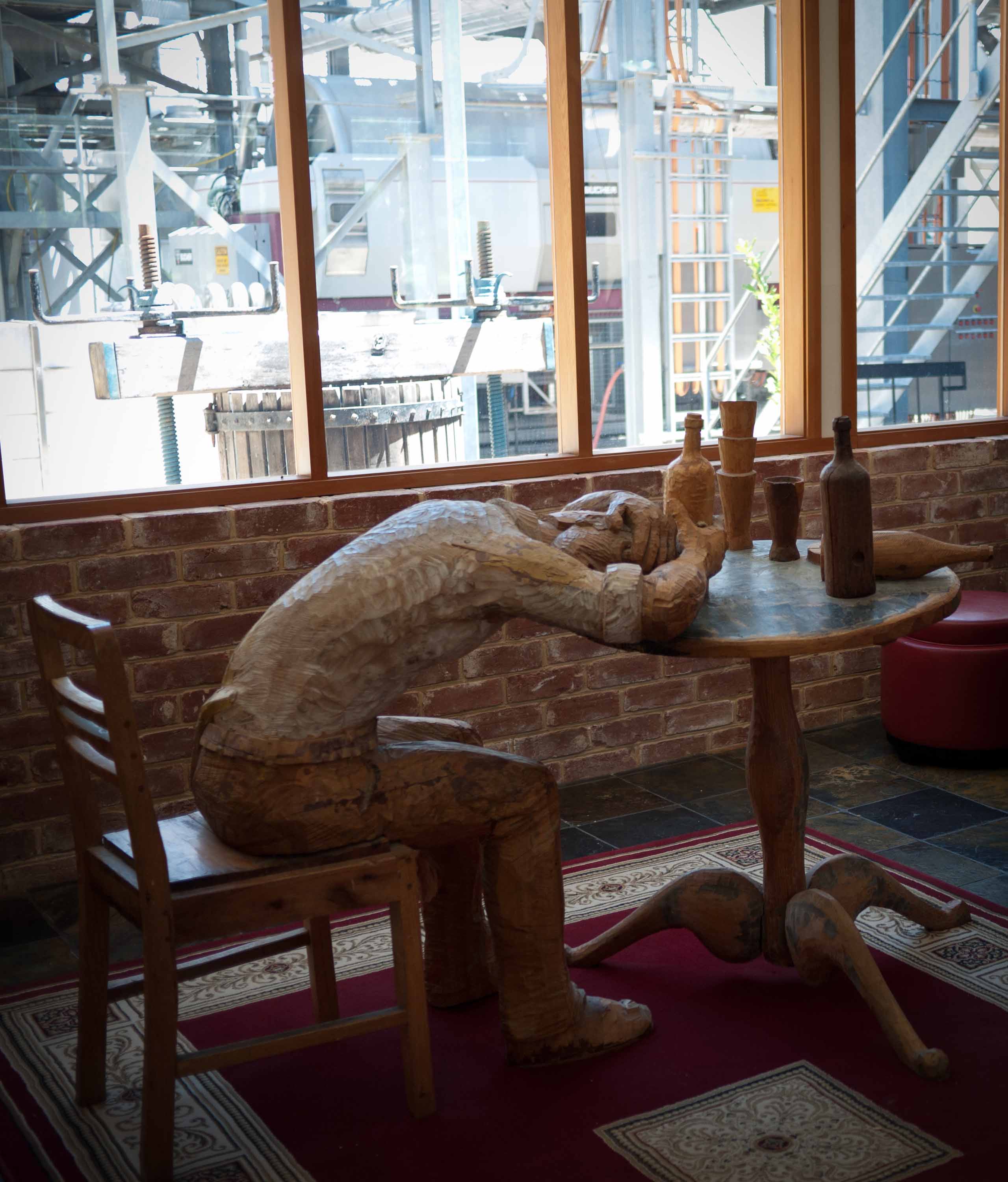 We board the day’s tour van with guide Ralf Hadzic of Life is a Cabernet Tours. This native Texan brandishes a true devil-may-care attitude, complete with cowboy boots and a hubcap-sized belt buckle. But his rogue Southern roots have mellowed a bit from years spent living down under. Fortunately, he’s lived in-country long enough to be considered a local, an Adelaide sophisticate even.

The capital city’s large Italian immigrant population ensures no shortage of great cafes and it so happens that Ralf knows the best one. We pit stop at Café Va Bene for the best cappuccino and lattes we’ve had in South Australia before departing the for our day-long venture into the Barossa.

Our first stop of the day takes us to Gorge Wildlife Park in Cuddlee Creek. If ever there was a more fitting town name for a zoo full of koalas and kangaroos, I can’t think of one. Set on more than fourteen acres of land, the park’s paths meander among one of the most comprehensive collections of privately owned animals and birds in the country. Random peacocks, fairy wrens and other exotic Australian birds wander the park aimlessly.

But, let’s be honest, our group has come here with one thing in mind: holding – more specifically cuddling – a koala. Is there anything more quintessential to an Australian vacation?

We’re hardly through the park’s front door before being whisked off to a small wooden booth of sorts. Almost immediately, a park guide brings in Mia – an adorable, wide-eyed, twenty-month old female koala bear. She’s given a healthy bunch of fresh eucalyptus to chew on, and to keep her occupied. 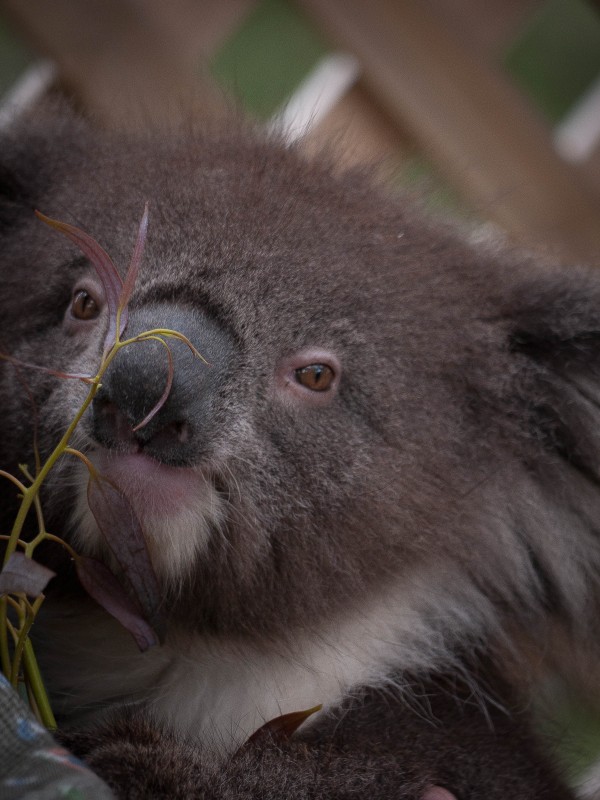 Each of the ladies in my group is playing polite, insisting that someone else hold her first. But the look on their faces tells me they’re all dying to get their hands on her. At the expense of being beaten, I take my turn last for a photo opp with Mia. After twenty minutes of chewing on a hearty bunch of eucalyptus, she smells delightfully of mint. 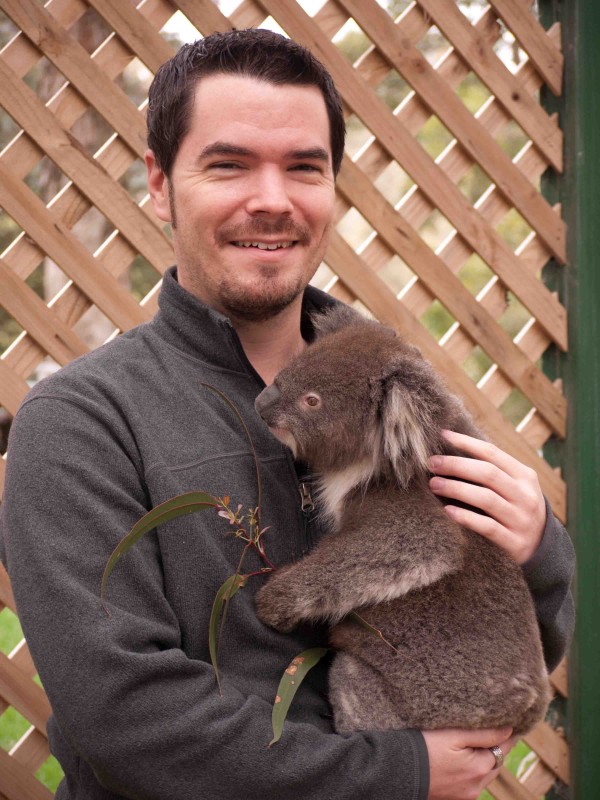 It’s no secret that koalas can be a bit [ahem] “testy” in the wild. They’re not known to be particularly friendly or social critters. Our guide reveals that while younger koalas have much sharper claws, they’re far more docile than the adults. This makes them the perfect candidates for requisite photo opps with pawing tourists.

But their patience and tolerance for human interaction is not without limit. Mia’s whisked away as quickly as she was brought in, lest she get hungry or angry. Or both. 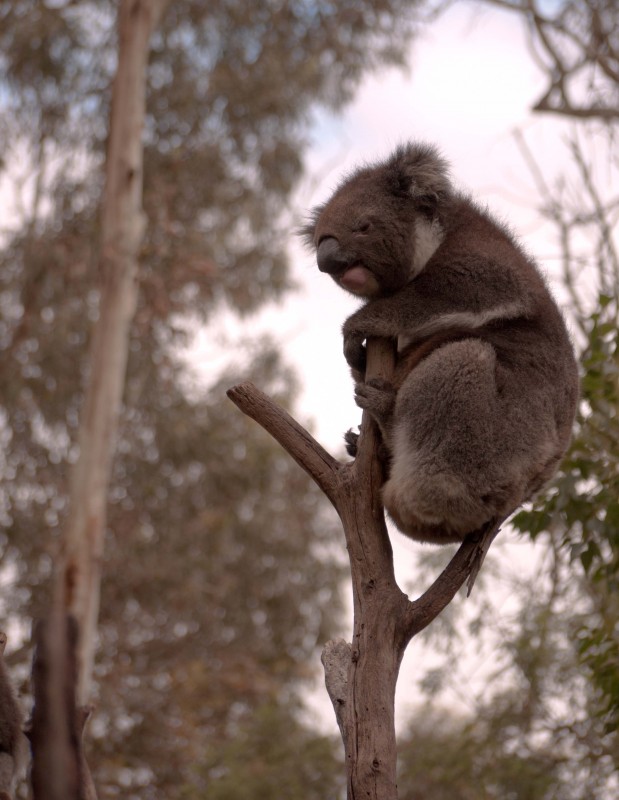 Afterwards, we explore the park’s many animal exhibits. Almost every species here is new to our group. It’s a menagerie of birds, marsupials, mammals and others I don’t recognize – many of which are entirely unique to Australia. 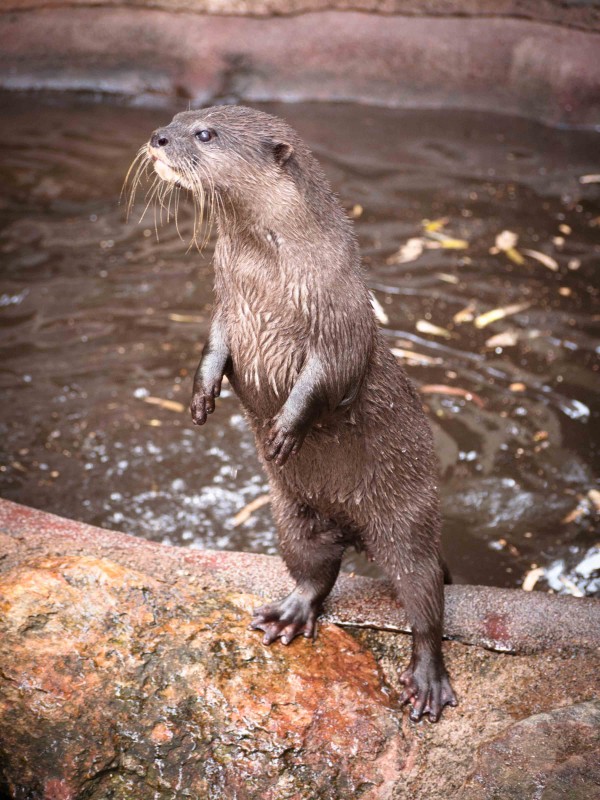 Nearing the end of our hour-long exploration, we enter what looks to be a large, open petting zoo replete with ”¦ kangaroos? It can’t be! Already? What appear to be hundreds of kangaroos – brown ones, mottled ones, even albinos – are sleeping, bouncing around, and every manner of activity in between.

Unbeknownst to us, our tour guide Ralf purchased a bag of nuts (tip: definitely do this) at the gift shop. He hardly pulls the bag from his pocket before there’s a mass kangaroo exodus in his direction. They know the sound of rattling peanuts well. 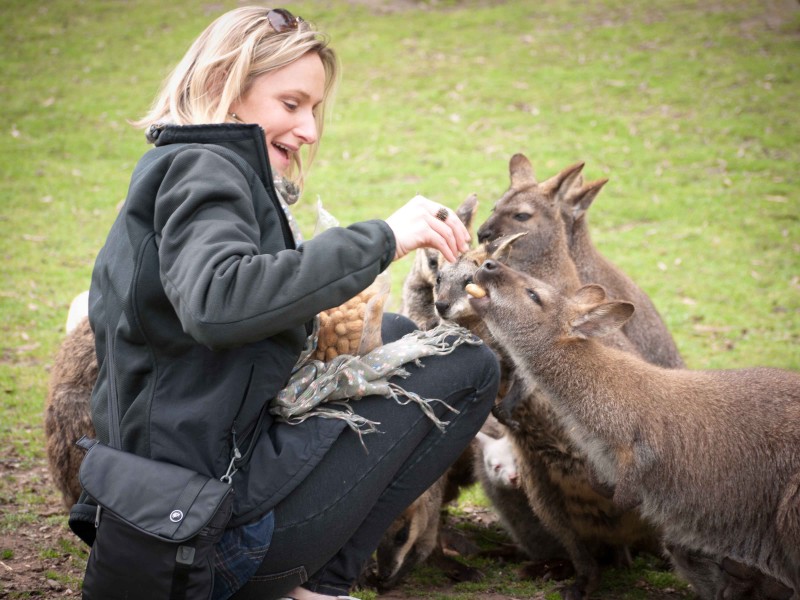 Ten minutes into the feeding frenzy, Ralf chuckles and politely informs us South Australian noobies that these are not in fact kangaroos. They’re wallabies – a smaller, but just as cute, marsupial cousin of the kangaroo.

The upside? A quick walk through to the next petting area reveals an even larger pen of kangaroos. No, no – actual kangaroos. And their Pavlovian reaction is every bit as attuned to the sound of rattling peanuts. 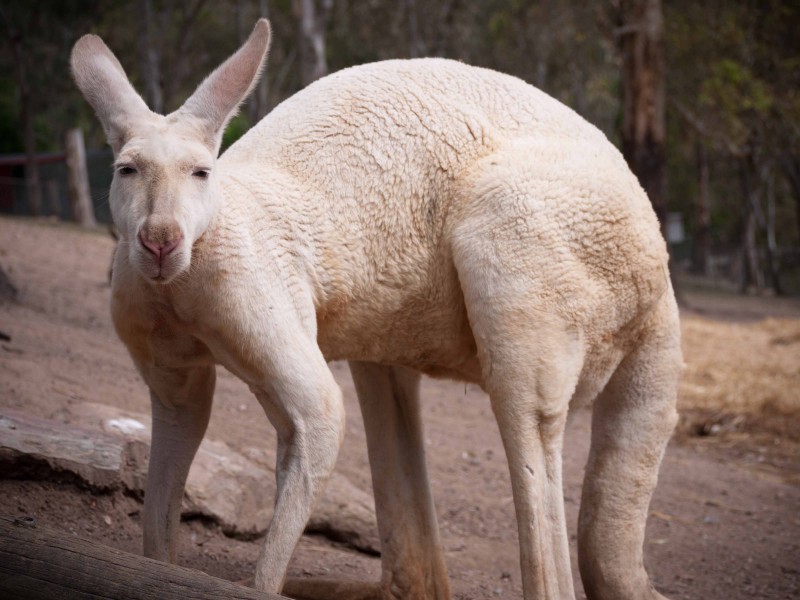 Within seconds, it’s a “kangaroo traffic jam” © (hat tip: Shana Ting Lipton for coining that phrase). Our entire group is surrounded by all manner of ’roo. We’re pulling peanuts from our pockets as fast as we can. 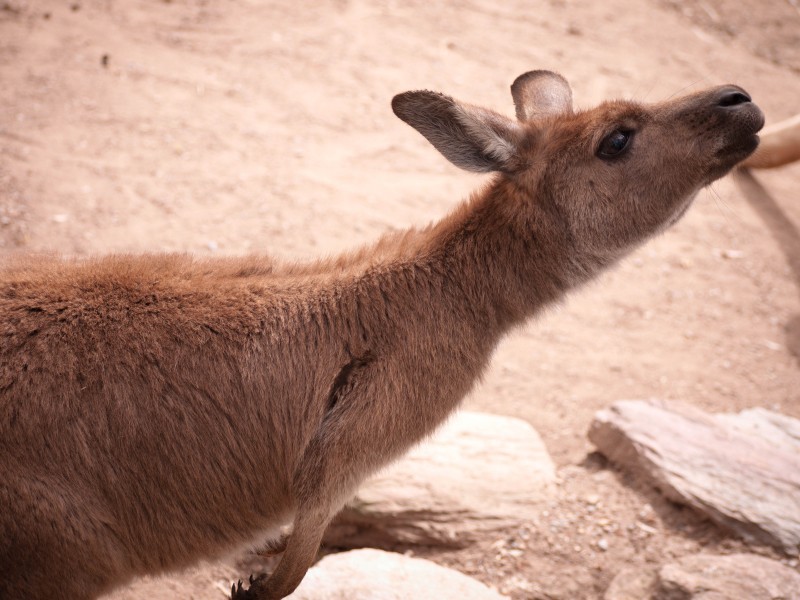 They’re surprisingly gentle, feeding in much the same way a tame, well-trained dog might. It proves an unforgettable experience – truly a must-see in South Australia. 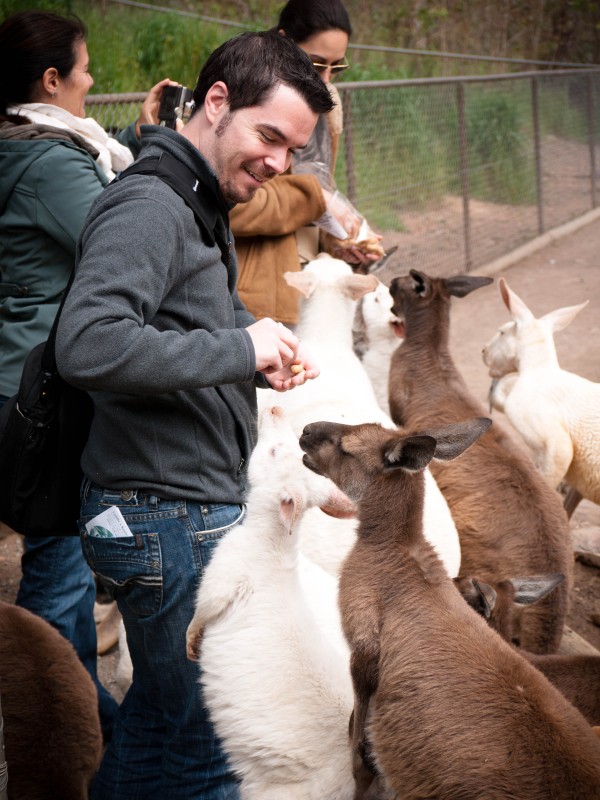 After a short twenty minutes (do we have to leave so soon?), Ralf’s getting testy. We’ve a tight schedule to keep and, by the drumming of fingers on his belt buckle, we best move on to wine country.

Into the Barossa: Australia’s Most Famous Wine Valley

Only an hour outside Adelaide, The Barossa offers everything you’d expect from Australia’s most famous wine region. Winemakers waiting to share their secrets at the cellar door; landscapes etched with manicured vineyards; passionate food producers proffering their wares at country markets; and grand chateaux surrounded by ornate gardens. 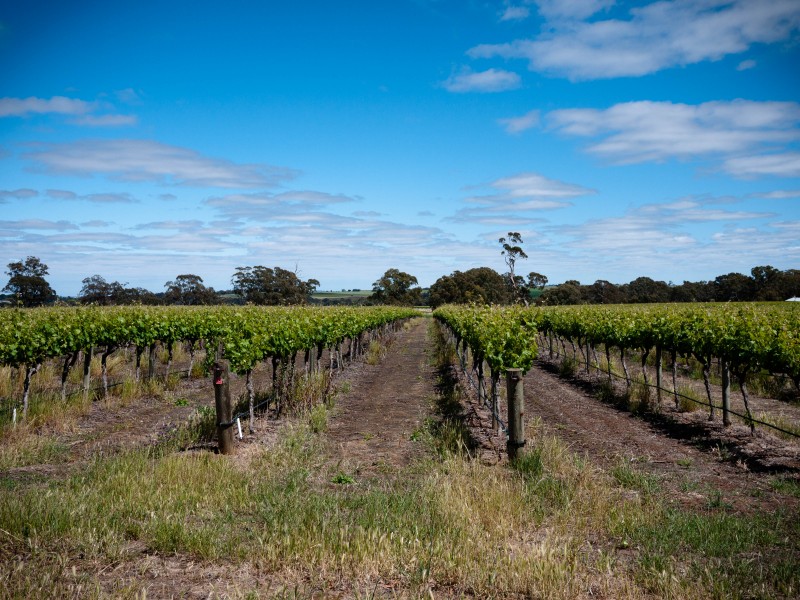 We’re driving through the valley at breakneck speed, watching vineyards stretch in every direction, to the very edge of the horizon. Its vast beauty is staggering, almost literally breathtaking.

Our first winery stop today takes us to Charles Melton Wines, widely acclaimed since 1984 for its range of full-bodied red wines, including the famous Rhone-style red called Nine Popes. It’s the only Grenache ever featured on the exclusive Langton’s List.

Don’t miss their Grains of Paradise Shiraz, described as “sweet , rich, warm and cuddly”. It”˜s big, bold and well-rounded – undoubtedly my favorite. Plus, when was the last time you drank a wine that was cuddly?

Exploring the Lows and Highs of Barossa Terroir at St. Hallett Wines

The Barossa is predominantly known for Shiraz – a varietal conducive to the region’s relatively cool climate and rich, diverse soil. Riesling fares well here too, though they’re a bit different than the German variety – very dry with a bold fruit front and extra dry finish. 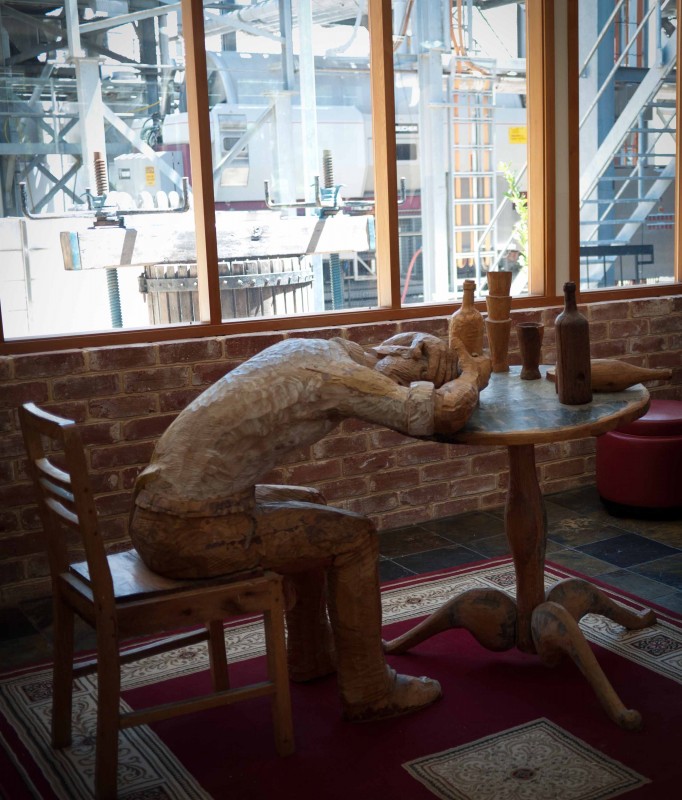 One Too Many Pops at St. Hallett Wines, South Australia

Which is why our next stop on the wine trail is St. Hallett Wines. Their offerings are pure Barossa – locally sourced Shiraz and Rieslings – and have been for nearly seventy years. It’s no surprise that it’s one of the oldest vineyards in the valley, where the red wines are still fermented in traditional open fermenters.

The tour features a mix of traditional and state-of-the-art wine-making equipment. It proves among the most educational our group has ever experienced. We learn a great deal about wine making, even sampling different red varietals from varying elevations in the valley to discern the individual tastes based on terroir. 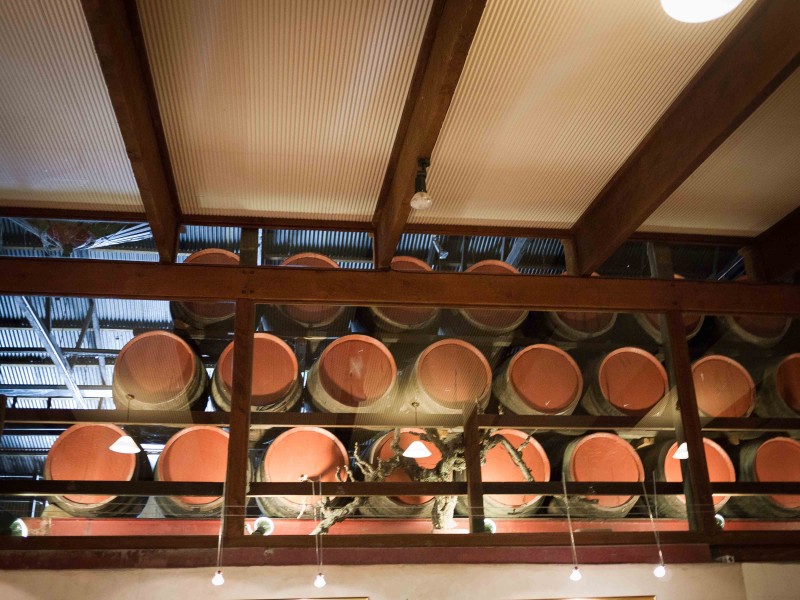 Our last winery stop for the day takes us to Peter Lehmann Wines, one of Australia’s most respected and innovative wineries. The brief tour ends with a tasting from their extensive wine selection.

It’s All Roses (and More Wine) at Moorooroo Park

Our last stop reveals tonight’s lodging: Moorooroo Park – an historic stone settlement on the banks of picturesque Jacob’s Creek. Formerly Jacob’s Creek Estate (no relation to the winery of the same name), this garden B&B features swank, rustic accommodations. The Park is actually a series of cabins, each with a unique charm and décor. Every room is furnished with Barossan antiques, king size beds, log fires and a luxury two-person Romanesque spa. 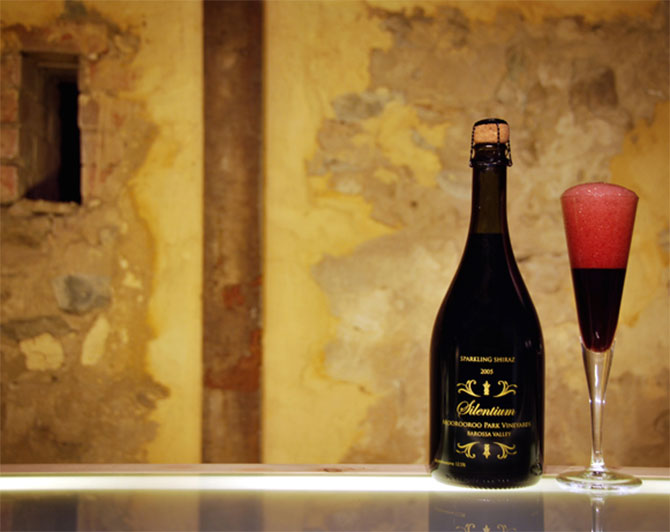 There are a number of onsite activities to choose from. Take a tour of the sprawling, perfectly manicured rose gardens or fancy a Barossa bike ride with Chef-Owner Wyndham House.

We cap off the day’s wine and wildlife extravaganza with a six-course degustation menu at the chic onsite restaurant.

Oh, and if you haven’t yet entered to win Unlimited Flights to Australia for One Year ”¦ well, why not? It’s simple and doesn’t take more than a minute to enter!