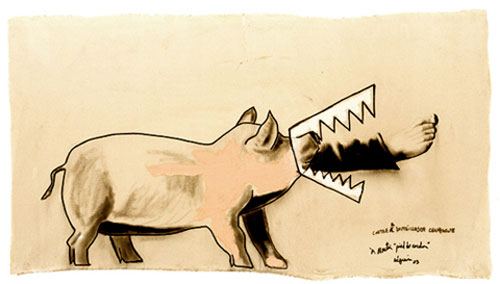 When one thinks of CNR, one’s mind goes right to Match Game. That show was delightful. No, no, it was brilliant. No, no, no, no … there is no word to describe it’s perfection. So I’m forced to make one up. And I’m going to do so … right now: scrumtrulescent! Match Game was absolutely scrumtrulescent.

adj: so great that any other word employed would be woefully insufficient, and would serve only to limit the sheer magnitude of the greatness intended as a descriptor.

I could end this post there, since any further words will no doubt be grossly inadequate to describe the life-altering meal we experienced there. But I suppose that wouldn’t make for very good reading, so I’ll try my best.

The cab dropped us off in the stylish Montreal Plateau at the corner of Duluth and St. Hubert, in the midst of pouring rain, right where Ellise from Tres Braseurs said it would be. It was a dark, unfamiliar neighborhood with little sign of activity. There were no larger-than-life McDonald’s-sized golden arches to indicate where PdC actually was. Yet across the street a non-nondescript, well lit cafe of some sort seemed entirely too crowded and noisy, considering the neighborhood.

Still, with mere minutes before our reservation, we ducked into a local video store to be sure where we were headed. In the interest of demonstrating my phenomenal command of the French language, I asked the clerk if he’d ever heard of “Oh Pee-head doo Coach-on”. He replied with a disgusted look at both my butchering of such a simple phrase and, more importantly, the insult to his Montreal-ness that I would even consider the possibility that he’d not heard of it.

As it turns out, the aforementioned well lit bistro across the street was in fact PdC. Yes, it is evidently a restaurant so good that they don’t even need to bother with such trivial things as … signs. If you want it, they’re confident you’ll find it.

Inside, I was immediately struck by the chaos and hustle of patrons and waitstaff. Contrary to the white linens and library-like stuffiness of more hoity toity suit-and-tie eateries, PdC is clean, but not sterile. The waitstaff: professional, but not stuffy. The chef, Martin Picard, recognizes that dining out should be an enjoyable experience; not a rigid, ritualistic exercise in politeness and faux courtesy. PdC was full of real people making real conversation, eating really great food. 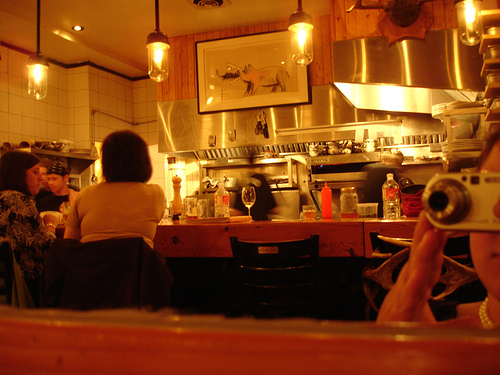 The wine list is extensive and truly top-notch. From great $7 glasses of Bourdeax (what we drank) to $4500 bottles of [insert name I can’t pronounce here], you won’t feel priced out of the stratosphere no matter your budget. If they’ve yet to win a Wine Spectator award of excellence, I’m sure it’s in the mail.

The menu presents a real problem. If you haven’t hit the lottery recently or are without access to a corporate expense account with a manager who’s loose with the purse strings, you’re going to have to decide on one entrée. And again — that presents a real problem. My inclination was to hand the menu back to the waiter with a confident, “Yes, please.” – an indication that I would be partaking in all they had to offer.

But … decisions had to be made. First the appetizer. For two reasons – three actually – I excitedly wanted to try the Geoduck Ceviche. The first is that I’ve yet to see it served anywhere. The second is that I watched Mike Rowe farming for them (mmm … clamlicious!) on Dirty Jobs and was partially excited that I knew what it was. And third is that I’ve never tried ceviche before. If you’re unfamiliar with it:

The marinade used in ceviche is citrus based, with lemons and limes being the most commonly used. This being said, all citrus will do. In addition to adding flavor, the citric acid causes the proteins in the seafood to become denatured, which pickles or “cooks” the fish without heat. The result tastes more like a cooked dish and less like raw fish preparations such as Japanese sashimi. Old style ceviche was left up to 3 hours for marinade. Modern style seviche usually has a very short marinating period. With the appropriate fish, it will marinate for as long as it takes to mix the ingredients, serve and carry to the table.

So it’s somewhere between sushi and cooked fish. When asked about it, the waiter responded by pressing the tips of his fingers to his pursed lips. “Magnifique.” I’m pretty sure that means good in French.

Alas, K really wanted the oysters and to be honest, I didn’t care what we ordered – word of mouth had assured me that everything was good. A dozen were brought to our table, served with a raspberry relish which was absolutely delicious. When it comes to seafood – shellfish in particular – the colder the water they’re pulled out of, the better. And it doesn’t get much colder than the icy waters of the North Atlantic, just off Prince Edward Island.

We sipped wine and gleefully tried to guess what delights the next course would bring. Watching the impeccably organized chaos of waitresses and waiters move in perfect concert within the narrow bistro was incredible. It was fun to take a sip of water only to have our glasses promptly refilled every thirty seconds. There were not only bus boys, but – and I can’t be certain of this – knife boys, fork boys, and soup and spoon boys. Every one of them completely invisible, like culinary ninjas. We’d turn our heads for a split-second to examine this or that person or piece of furniture, only to turn back and find old dishes vanished and replaced with the next course, piece of flatware, or glass of red wine.

Finally: dinner. K ordered the signature dish – au pied de cochon (“foot of the pig”) stuffed with braised pork and foie gras. Yes, you read that right: it’s pig stuffed with more pig. And goose liver. Needless to say, it was both rich and impossibly delicious.

But I came for one thing and one thing only. It’s the dish that alone inspired a dozen Food Network hosts and countless Montreal travelers to visit PdC: Duck in a Can. A shallow bowl is brought to the table containing only a buttered crouton, topped with PdC’s signature mashed potatoes, complete with heart attack-inducing doses of cream, butter and cheese curds. The waiter then brings a soup can labeled “Canard en Conserve” and can opener to the table. Upon cracking it open, half a mallard duck, jus, foie gras, garlic, balsamic demi-glaze and other heavenly ingredients contained within are squarely place atop the potato pile. There literally are no words to describe the richness and exquisite taste. Comparing it to anything I’d previously eaten would border on criminal. 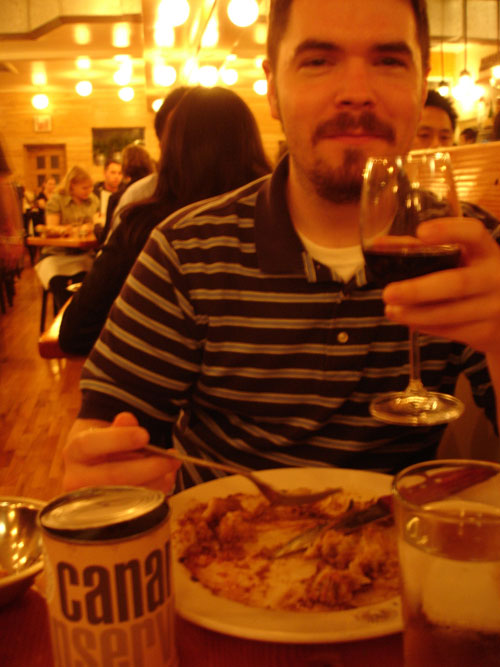 About half way through the meal, K looked at me with silver dollar-sized eyes as if to say, “I’m beyond full.” I was too. I also told her that if the building were burning down around me and I had to choose between saving an old lady with a walker or finishing my meal, I’d kindly send my regards to Blanche. Sure I’d be going to hell. But I’d be content to burn for all eternity with a belly full of meat so heavenly that God himself could have only replied with a “Daaaaamn!” (you have to say it like Martin Lawrence).

I get my love of food and all things culinary from my stepfather. At an early age, he imparted on me such dining etiquette essentials as: don’t put ketchup on your steak and chocolate milk is not a dinner beverage. Short of pouring a dash of wine on the ground (one for my homies!) in his honor, I sat plump and satiated, thinking how happy he’d be if he could see me now.

Like all great things in this world – great sex, heavenly single malt scotch, high stakes casino gambling, and finally finishing the latest Oprah Book of the Month book – you really have to try it for yourself. Au Pied de Cochon is not an experience one can adequately explain in words. It’s impossible to overstate just how great this food was. PdC was the best meal I’ve ever had. Ever. Period. I say that without an ounce of hyperbole, knowing that it’s a meal by which I will measure many future meals. This place is a destination restaurant with a capital “D”. I could happily build an entire trip to Canada around a visit there without thinking twice.

By subway: Get off at Sherbrooke.

Hours: Tuesday to Sunday, from 5 p.m. to midnight.

Pricing: Relatively expensive. Total cost for two of us, including appetizer, two entrees, dessert, bottle of wine, and tip: $180 CAN