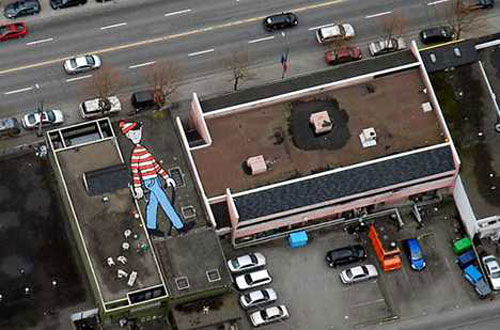 A young artist and web designer has created a game that she hopes will take off. Melanie Coles has hidden an enormous 55 ft painting of Waldo — the nerdy, lanky spectacled character clad in a red and white striped top and cane, from the Waldo books – on a rooftop of an undisclosed location in Vancouver, in the hope that it will be picked up by Google Earth satellites.

The location of the painting is top secret, and the anticipation of when it will show up on Google Earth is part of the fun, Melanie says. Since Google Earth does not publicize their schedule, no one knows when Waldo will show on a computer screen somewhere. The project has sparked off an international buzz with net users, who are keen to be the first to spot Waldo.

Melanie hopes that by making Waldo available to all through an open source program and template, she can set off a game that will spread virally to become an international hit. Her dream is of a “Where’s Waldo?” game being played across the globe as people begin creating and hiding their own Waldos in their cities.