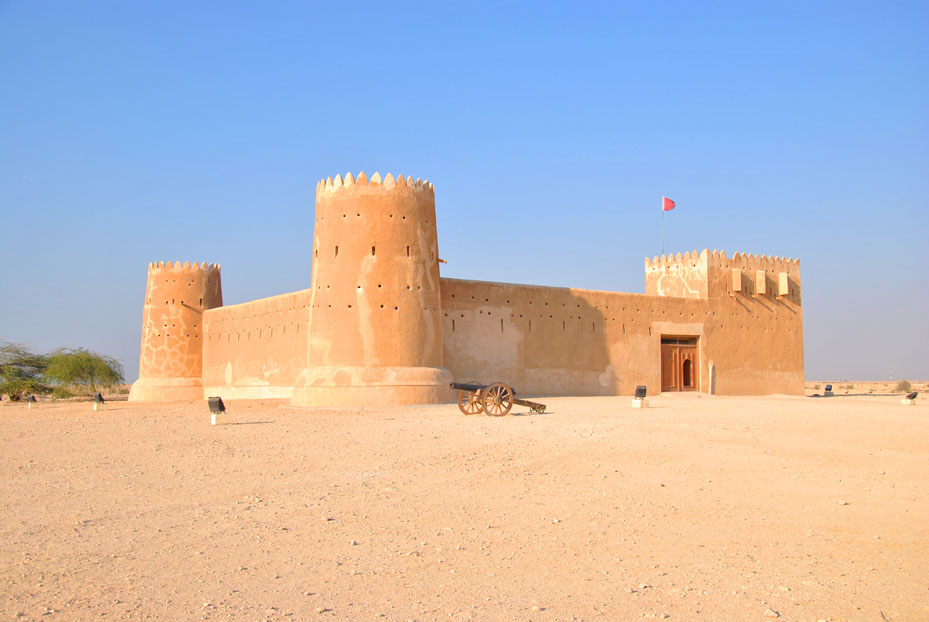 Sitting on the coast of northern Qatar is Zubarah, an ancient town that for several hundred years was the epicentre of the pearling industry. Although most of it remains buried under sand dunes, its location near pristine beaches provides a sweeping view of the waters that made this place a flourishing city. Abandoned for 74 years, the town has been unearthed by archaeologists, allowing visitors a glimpse of traditional Qatari life hundreds of years ago. 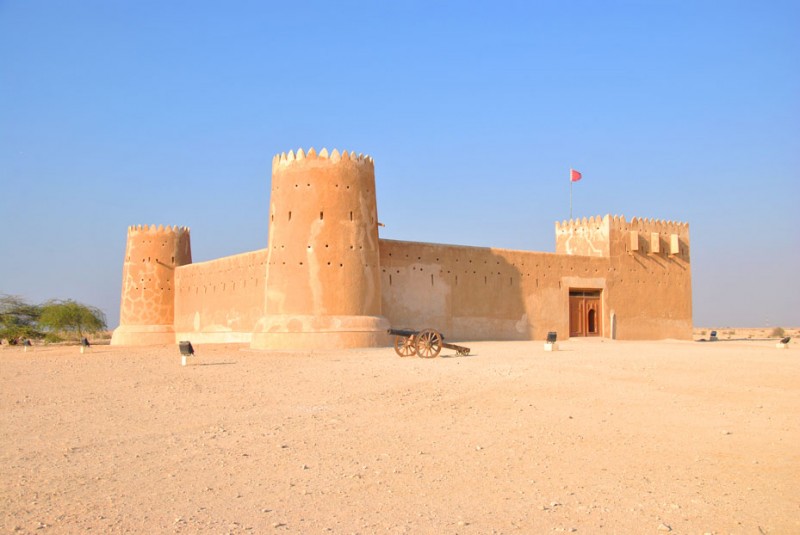 Before we could approach the entrance to the ancient ruins I encountered upon Zubara fort. Within the flat surroundings, the fort stood resolute, able to withstand anything that the tempestuous Qatari weather threw its way.

In the 1930’s the ruling family of Qatar, the Al Thani, and the ruling family of Bahrain, the Al Khalifa, who also happened to be some of the most influential families that once lived in Zubarah, fell into dispute over who claimed ownership of the city ruins. Fearing a possible attack, the Al Thani family constructed Zubarah fort to keep watch over the city. After this period of unrest the fort was used as a Coast Guard station until the 1980’s, where it has since been utilized as a museum to display archaeological findings in the area.

Stepping past two canons through the entrance, it was apparent from the metre-thick walls that the fort could easily stave off an attack. In the centre stood a square courtyard, encompassed by narrow aisles alongside dark, cool rooms that once acted as storage areas long ago. Along the walls of the aisles posters hung, providing visitors with an introduction to the history of Zubarah along with information about the discoveries the current archaeological excavations have uncovered.

After clamouring up a steep flight of steps towards the turrets of the fort, it was surprising to notice that the walls were higher than they appeared from the courtyard. A series of small holes were dotted along the walls, which we soon learned were angled slightly, so they allowed sunlight and a view to those inside the fort without creating any vulnerable spaces for potential enemies to fire at. Inside the turrets it was surprisingly cool and spacious, with the thick walls providing a much-appreciated shelter from the heat. Peering through one of the eye holes it was just possible to see the small island of Bahrain sitting on the horizon. Scanning the ground to the left it was possible to make out a crisscross grid of sand dunes, providing the perfect camouflage to hide the ruins of Zubarah. 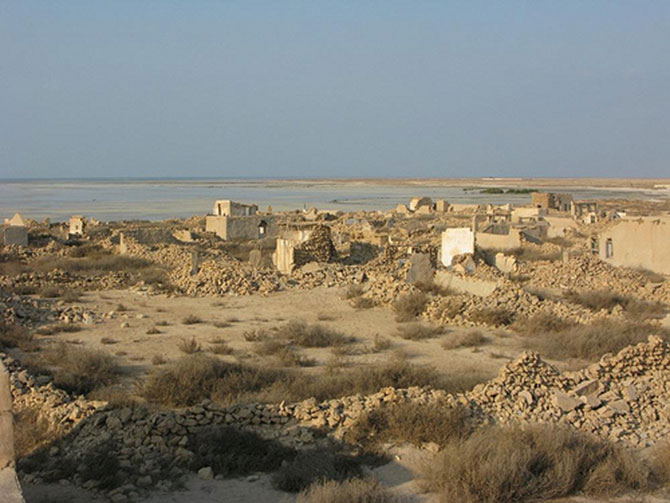 Continuing further west, we came upon an unmarked entrance to the northern shoreline of Zubarah. The bulging shapes of ruined houses and walls reared up at us, feebly disguised under a veil of sand that had slowly engulfed the buildings over the years of abandonment. The sea breeze gusted through, kicking up a wave of grit as it whistled through the once-alleyways of the town. Gazing across the shore, it seemed as though the ruins stretched forever into the distance.

Written evidence indicates that Zubarah was already settled by the 17th century, and there is even a tantalizing note by Ptolemy recorded in 1 A.D. mentioning a town called ”˜Qadra’, which could possibly refer to Qatar. Throughout the centuries, more and more tribes travelled from the Arabian Peninsula to settle and exploit the pearl banks of Zubara.

By the 18th century Zubara grew to become a flourishing trade and pearling centre, and was one of the iconic centres of the Arabian Gulf. However its prominence was short-lived. Following a series of attempted invasions from Bahrain, the Al Khalifa tribe in turn invaded Bahrain and initiated a sheikhdom on the island. As a result people began to relocate to Bahrain, causing the town to fall into a state of decline, until it was finally abandoned in the 1930’s following the exploitation of Japan’s pearl banks.

Following the sound of voices, we were led to a team of archaeologists excavating an ancient mosque. Treading carefully on the worn surface, the archaeologist Gareth described the different features of the mosque, from the decrepit pillars to the damaged plaster still clinging to the walls. Gazing around the area, imagining the lofty pillars and elaborately painted walls, to the tranquil atmosphere by the shoreline, it was easy to envision this town as a regal and bustling centre.

Sadly however this building, and others like it, is under threat. Over the centuries seawater has eroded away at the walls and foundations, with the tide each day stealing a brick here and there from the buildings. Although efforts have been made to protect the existing excavations, further investment is needed to preserve this ancient city.

A little further along the pathway we were met with more archaeologists recording the remains of a madabe (date press), ruined houses, and fortifications. Peering down into the date press, the sandy-white floor was incised with a series of channels that conducted the flow of the date juices into jars at the end.

Winding stone walls protected houses from streets that centuries ago were filled with people. A peek at the foundations of one excavated house proved to be a spacious area with three rooms, not unlike what our houses resemble today.

In the 1980’s, a team of archaeologists built a reconstruction of the city’s walls. Striding over to where the wall sat, its yellow sandy hue was reminiscent of the shore of the beach it was situated near to. Gently running my hand over the surface, the wall was surprisingly hard and compact and not the gritty texture I was expecting. We soon learnt from the archaeologists that the town buildings were made from a combination of coral rock, limestone, gypsum, and mud mortar and not the natural sand as we assumed.

By using this combination the people of Zubarah were able to keep their houses cool and well-protected from the harsh elements of the desert. This ancient building technique is still used by the Qatari people today, and I was reminded of how, despite the fact the people of this civilisation were long gone, they continue to show us how things have not changed as much as we might think.

Given the fact that the site is tipped for UNESCO World Heritage status, now is a better time than ever to see the site devoid of crowds in its natural environment before it’s potentially traipsed upon by thousands of tourists!