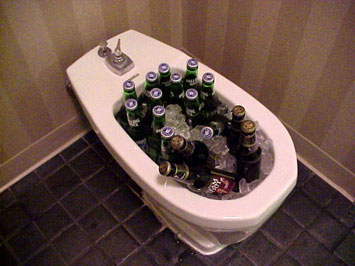 An Idiot’s Incomplete Guide to the Bidet

You think you know what they are for and you are probably right but once you check into a European hotel and see one I’m willing to bet you second guess yourself. Right there next to the toilet and despite the lack of room for a shower in the same space your hotel has provided you with the wondrously perplexing contraption: the bidet.

That I am writing on this topic should reveal my ignorance. You may just think I’m downright stupid, a short-sighted American perhaps. The truth is, these little solutions to sanitation are not as straight forward as one may think to someone who has never experienced one (and I use the term “experienced” loosely).

Almost every American I have traveled with has said the same thing: “They’re for washing your vagina … duh!”. Yet once they turn the knob and the water begins to pour out into the basin, an invariable look of confused contemplation crosses their face and their tone of certainty changes.

“Even if it is for washing your vagina, how the hell do you use it comfortably and effectively?” 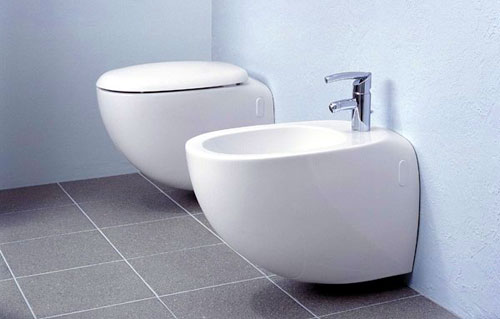 Let’s start from the beginning: bidet is French and is pronounced “bid-day”. Humorously, (at least it got an immature chuckle out of me) bidet means “a small saddle horse”. This I can only guess, or trust Wikipedia, to come from the way one is supposed to straddle the porcelain pony when attempting to use it.

Found in most hotels or homes in Italy, Greece, Spain and many other European countries the bidet comes in a couple different styles. There is the “jet of water shoots directly up from the bottom of the bowl” variety (like a drinking fountain) and for the more adventurous, the spigot variety that looks a lot like a sink/toilet combination. The former variety, I must admit, just plain scares me.

However, it is the latter that troubles me the most as it would seem that one is really supposed to fill the basin up with water and hover over it lapping water onto their nether regions until clean. The nozzle does not seem to shoot water at a “convenient” angle and if you’re not careful you could shoot a jet of water between your legs and straight across the room.

On a few occasions my friends and I have stood around one of these bidets, contemplating its potential uses. Freshening up after using the toilet of course was a likely possibility but as I mentioned it just looked uncomfortable and awkward.

What about washing one’s feet? This seemed a bit more practical but still the design didn’t seem conducive to such a use. 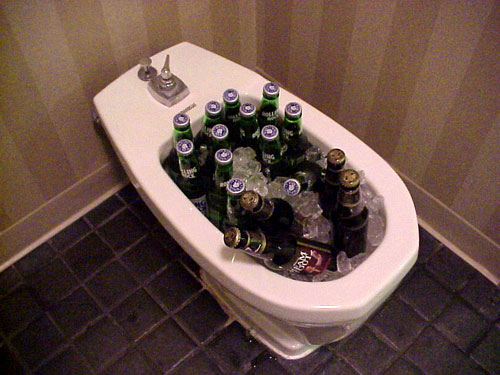 Perhaps not what bidet inventors had in mind.

Dogs often drink from the toilet bowl, right? Why not give them one of their own that refills with clean water at the turn of the faucet (for their part, the only thing missing is opposable thumbs). This must be more sanitary than having them plunge their heads into the family head. The chances of it being an odd foreign urinal were slim. There was a toilet right next to it.

Or perhaps, dare I say, it was the perfect size to wash a small child in? Hard to imagine Dr. Spock approving of such a use.

As it turns out the bidet was designed to hose off your backside and genitals after using the toilet but it has served many uses. Including all of the above uses (yes baby washing is one of them; just Google the image) the bidet kind of acts as a small sink.

The lack of its popularity in the States is probably from its inherent (at least I think inherent) characteristic of being a rather unsanitary form of hygiene. The variety that has a water jet pointed towards the ceiling from the base of the bowl for example, will by design attempt to clean your soiled bottom with water passing through the “soil” falling from your bottom.

For me, I just tend to steer clear of them when traveling. You may want to try these out, you may not. I suggest however that you don’t try and save a few bucks and wash your dirty clothes in one. In any case you can now tell your travel partner what that odd little “toilet” in the bathroom is for or just let them figure it out all on their own.