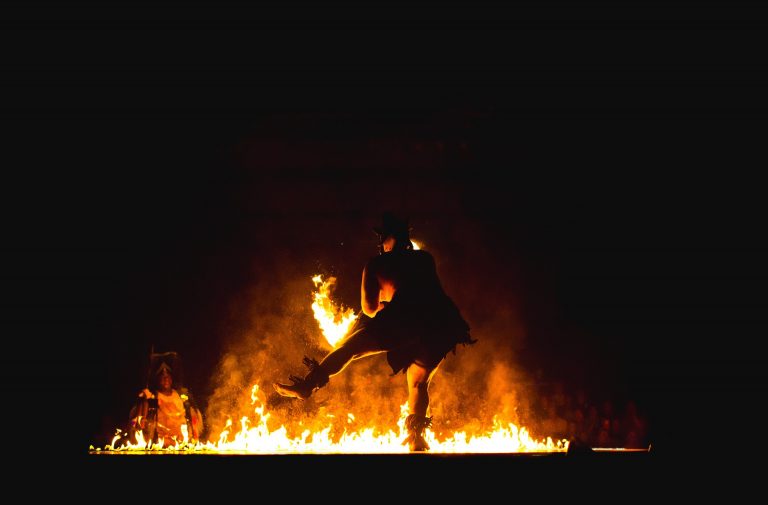 The 8 Most Bizarre Rituals in the World

Any ritual, religious or otherwise, has some unusual origins. Do you think tattoo parlors are now available in every nightlife district simply because they were fashionable hundreds of years ago? I think not; tattoos, like many other “tribal” customs, were a way of transforming the canvas (you) into a work of art, imbuing one with power.

Many western customs – religious or otherwise – we’ve come to accept as commonplace are used for a significant transition period: birth, becoming a man/woman, dying, marriage.

“Don’t tell anyone, but on the pagan day of the sun god Ra, I kneel at the foot of an ancient instrument of torture and consume ritualistic symbols of blood and flesh.”

Langdon shrugged. “And if any of you care to join me, come to the Harvard chapel on Sunday, kneel beneath the crucifix, and take Holy Communion.”

Taken out of their cultural context, these rituals may well be considered “bizarre”, “unnecessary”, even downright insane, but not to those who perform them. They completely believe in what they’re doing, what it represents, and the impact on the receiver.

What are some of the most bizarre rituals around the world?

We begin our search at a Muslim shrine in the Maharashtra state of India, where it is common practice to toss newborn babies off the side of a 15-meter tall temple. Observed for half a millennium, this ritual is believed to strengthen the children, give them good luck well into adulthood as well as “courage and intelligence.”

It’s worth mentioning the babies do not fall to the ground (naturally), as followers are standing by with a large sheet to catch them.

The history of certain wedding customs are bizarre in themselves. The idea of a “best man” originated from the German states, where available women were not always great in number and many bachelors opted to kidnap a bride prior to her wedding night. The groom-to-be chose a friend, usually one trusted and strong, to defend her from other suitors.

In Scotland, however, the bride faces a whole different ball of wax before she can walk down the aisle. The practice of “blackening the bride” involves covering her with some nasty smelling things like eggs, mystery sauces, molasses, flour, whatever else the bridesmaids can dream up to take the pressure off of them … she must taste delicious by the end, I have to say.

The tradition varies from region to region, but for the most part, the bride or groom is covered with something smelly or sticky, bound, and driven around or left tied to a tree or lamppost. Actually, given some of the drunken-induced rituals we see in American bachelor parties, I suppose this isn’t that bizarre. At least you won’t catch a Scot marrying a dog. 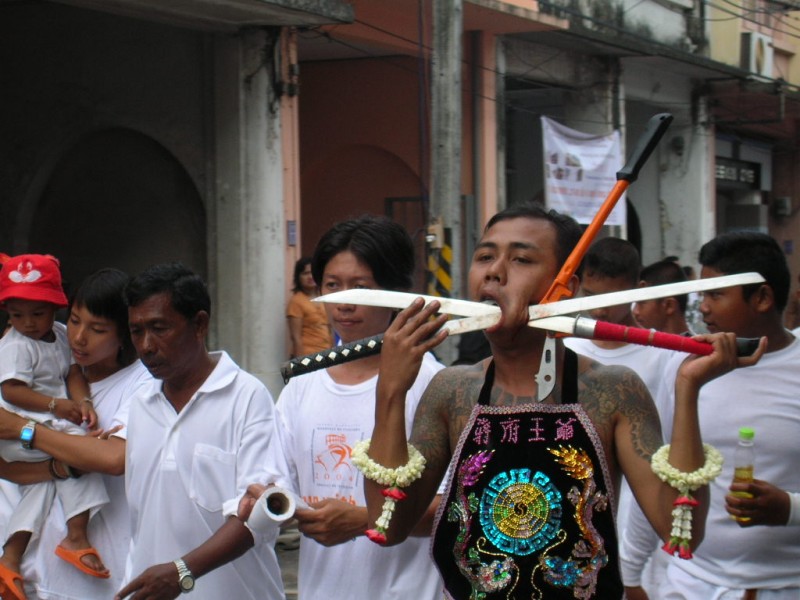 In a world filled with such dangerous delicacies, it’s amazing we can still find rituals surrounding food designed to induce such pain. In this case, the Phuket Vegetarian Festival in Thailand takes the cake (SIDENOTE: there is no actual cake).

In September or October every year, Thai people in the southern city of Phuket refrain from eating meat for nine days. The festival highlights, however, are its incredible masochistic rituals: men and women puncturing their cheeks with spears, knives… almost anything you can imagine, they’ve shoved through their bodies. The belief is that the Chinese gods protect followers from pain and suffering; it’s remarkable how few, if any, people bear scars following the festival. 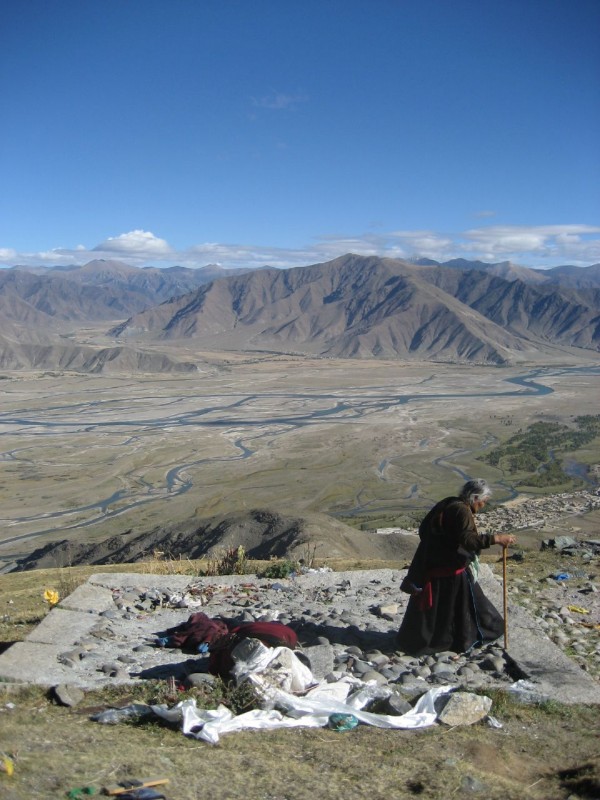 Very few outsiders have had the chance to observe this firsthand. In Tibet, it was once a common funeral custom to dissect the body and place the pieces on a mountaintop. I suppose, in a sense, the majority of funerals throughout the world are a waste of resources and space: we have elaborately-carved coffins, bizarre locations for our ashes (low Earth orbit being one), even specialists to beautify the body following death.

As most Tibetans follow Buddhist traditions, the goal is to provide resources to the world, even after death, i.e. offering the “unneeded” body to vultures. When China first stepped in and quelled most of the local practices, sky burials, as they are known, were illegal. Since the 1980s, however, it is still possible to observe a jhator with the permission of the family. 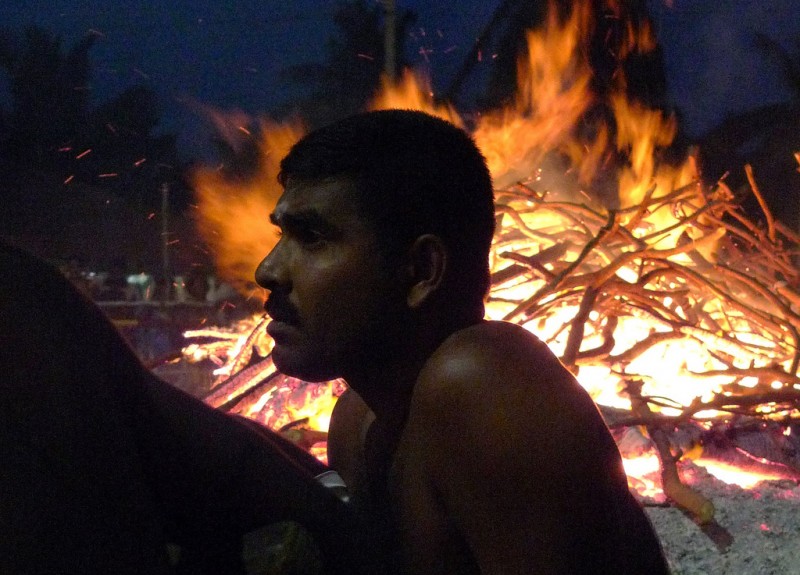 Self-immolation is a practice best left to religious zealots and complete lunatics. Historically, using fire in rituals has been an act of purification or testing limits. Although no religion requires its followers to set themselves ablaze (Islamic suicide bombers blowing themselves up don’t count), there are a few that encourage firewalking or walking on hot coals.

In Shinto shrines and Buddhist temples of Japan, monks, priests, and lay people can walk barefoot over smoking embers to attempt to achieve a sudden moment of clarity, overcome their fears, and get the energy flowing. A handful of firewalking customs exist in North Africa, Haiti, the Carribbean, and southeast Asia. 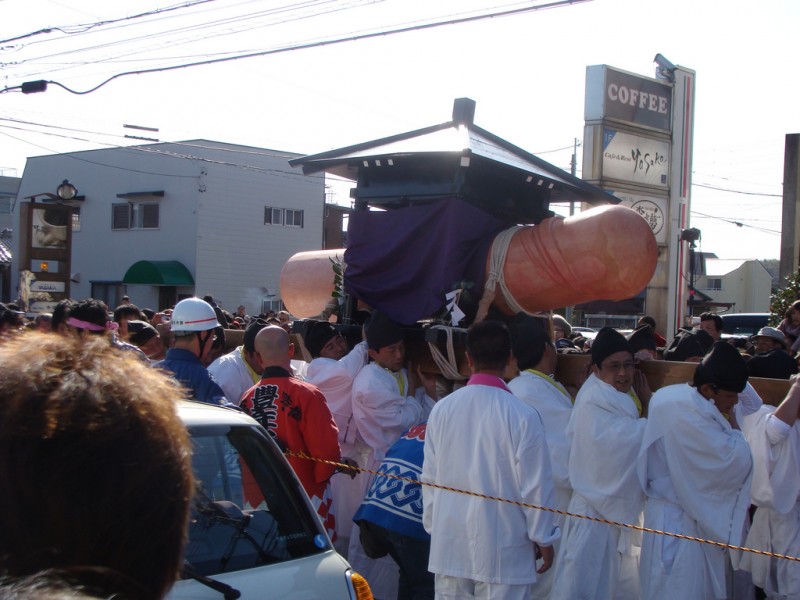 You really don’t have to look far in Japan to locate a giant wooden penis. Even outside the love hotel district in Shibuya, there are scores of sex museums scattered across the country displaying phallic symbols and Kama Sutra-esque caricatures.

In particular, the Hounen Matsuri is well known as the largest fertility festival in the land of the rising sun. Every March 15th, volunteers vie for the chance to carry a long wooden phallus (2.5 meters in the town of Komaki) across town to bestow its regenerative powers on the local crops, and to ensure fertility and fecundity among the residents. 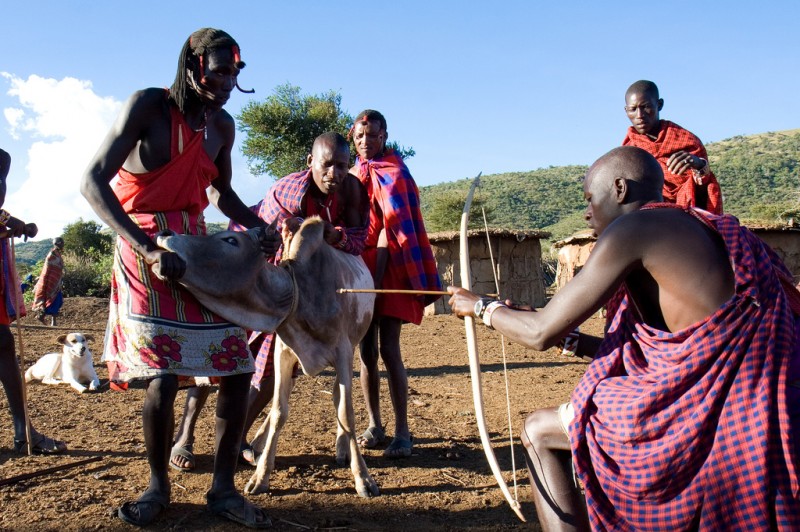 Before you judge too harshly, look at the first quotation again. All devout Christians believe in the transubstantiation of wine every time they take communion. Some people in different parts of the world just happen to take it a step further, by using real blood. In Kenya, Maasai warriors regularly consume cow’s blood mixed with its milk, but also drink it directly from the vein after a bloodletting. There were so many contenders for this vied category: the tribes in Papua New Guinea, the Aborigines of Australia, inner city gangs of New York. In the end, the winner has to be the Satere Mawé tribe of the Amazon with their incredible gloves.

What harm could a glove be, you might ask? Well, imagine a set filled with giant ants, which are positioned stinger first, then irritated enough that any small disturbance will result in a bite. The Paraponera Clavata, also known as bullet ants – so named because one bite feels like getting shot – have the opportunity to sting the wearer of the gloves to their heart’s content. Initiates don these gloves for 30 minutes, not once, but … 25 times in a row. That’s more than half a day of being subjected to the venom of these aggressive ants. After that kind of pain, how could one not be considered a man?

Unlike many powerful neurotoxins that are designed to paralyse potential prey, the bullet ant’s sting has evolved over the millennia as a tool for defence. At a biochemical level, it prevents the body from protecting itself against pain, sending the neurones into free flow and creating escalating agony, designed to make any inquisitive animal think it has suffered enormous physical damage ”” and clear off.

I had suffered several hundred stings, and all of a sudden I went beyond pain. The sensations are not describable using simple words or metaphors, so I’ll just try to describe how I reacted.

First, I started wailing, then, once that had passed, the floodgates opened ”” deep, guttural sobbing, uncontrollable shaking, writhing, convulsing. You could see the neurotoxin kicking in, my muscles starting to palpitate, my eyelids becoming heavy and drooping, my lips going numb. I started to drool, and suddenly I wasn’t responding to anything at all. My legs wouldn’t hold me up, and our doctor was shouting at me to keep moving and not to give in to the urge to lie down and let it take me.

Read Steve Backshall’s entire recount of his experience of the ritual.