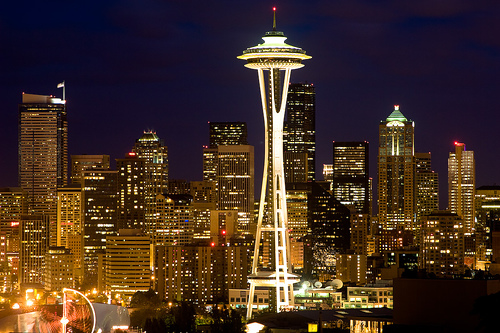 It’s the suicide capital, a city blanketed by a dark watercolor sky for the better part of eight months each year. For a long time, the only thing out-of-towners could say about Seattle was, “it rains a lot there, right?”

But the city has gotten better press lately. The Puget Sound area is becoming known for its balance of urban living and quick access to the rugged outdoors — an aspect which led Seattle’s tourism bureau to coin the unfortunate buzzword, “Metronatural”. And of course, there’s the coffee. Thanks, Starbucks.

What still remains a bit of a secret, though, is how sweet Seattle can be in the summertime. The Emerald City becomes even more lush. A cool wind carries a blended perfume of salt and pine, and keeps the air temperature hovering around a cozy 75 degrees. We don’t use AC in the Northwest, we just open the windows.

And as more people discover the goods, the city grows and becomes more colorful — even as its citizens lament the rise of condo after glittering condo. New joints pop up while old favorites continue to boom, and those who can’t hack the rain trickle out. But the people who stick around love the city for its subtleties; from the Chinatown shops and corner cafes where you can while away the dreary months, to the outdoor markets and bike paths where you can celebrate the sun. 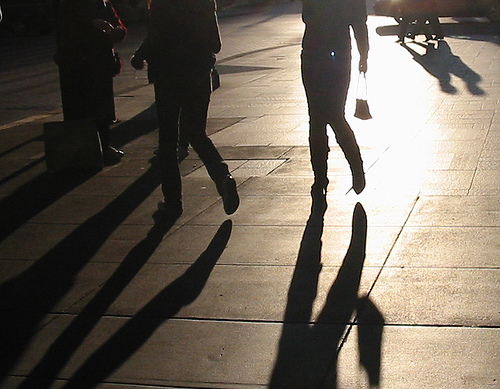 After touching down at Sea-Tac International Airport (SEA), head out of baggage claim and hop the 194 Metro bus into downtown — Seattle is a late adopter of mass transit, and has nothing comparable to Chicago’s L Train or San Francisco’s BART. By 2009 the city will have completed its light rail system, which will whisk travelers from the airport into the city on a fancy new train. But for now, you’re stuck with bumping along on a ratty bus seat. (It’s still better than renting a car; the traffic in Seattle is ridiculous.)

Once you make it into downtown, the bus will head underground. Hop off at University station and make your way to street level. By now, you’re probably starving, so head over to The Crumpet Shop at 1st & Pike — right near Pike Place Market.

The decor here is low-key, and the crumpets (imagine a thicker, fluffier English muffin) are baked fresh every morning. Order one with ricotta and jam, and wash it down with a mug of Oolong tea. Through the morning fog, you’ll be able to see the glowing marquee from Showgirls — a strip joint just across the street that city officials probably wish would disappear.

Belly full of British-style goodness, venture over to Pike Place. This may be one of the hottest stops for tourists visiting Seattle, but that doesn’t make it any less authentic. Many of the vendors at the market have been here for decades, and its stalls are a boon to the local economy. Take your time as you wander through, wafting in the mingling scents of fish, baked goods and fresh flowers. Taste some samples of local chocolate-covered dried fruit at the Chukar Cherry stand, and maybe buy a couple Washington apples with the knowledge that they were probably trucked in that morning.

Head down 1st Avenue over to the Seattle Art Museum — it’s hard to miss as there’s a giant moving sculpture right outside of a man with a hammer, creatively referred to as “The Hammering Man.” Currently rotating through the SAM are pieces of Roman art from the Louvre and a collection simply titled Black Art; the museum’s Web site describes this exhibit as magnifying “the impact of this charged color and its reference to complicated social histories and purely artistic concerns.”

When you’ve had your fill of the museum’s corridors, continue strolling down 1st and find your way through the doors of Elliot Bay Books, an independent, family-owned shop that’s been in the same building in the historic Pioneer Square neighborhood since 1979. You could easily spend a couple hours perusing the shelves here, especially near the well-stocked travel narrative section.

Just a few blocks away, there will likely be a line snaking outside an inconspicuous corner sandwich shop called Salumi. Started by Armandino Batali, whose grandfather opened Seattle’s first Italian food import store in 1903, this deli specializes in traditional cured meats and makes killer sandwiches that are worth the wait.

Keep strolling southward into the International District, aka Chinatown. If you’re still feeling the heat from those spicy Italian cuts, grab a cool bubble tea smoothie at Gossip on King & Maynard. For those unfamiliar with the drink: it was first popularized in Taiwan, and is traditionally a sweet, milky black tea with chewy tapioca pearls. Since making its way to the US the form has changed a bit, and flavors at Gossip range from taro to fresh watermelon.

Before you move on, make sure to spend some time browsing the aisles of nearby Uwajimaya, a huge Japanese grocery store filled with eclectic goodies. Pick up some strangely flavored chewy candy, get some bento boxes to use for packing lunches, or buy a bottle of fine sake to take home as a gift. 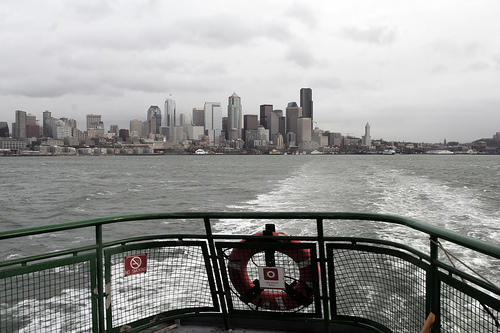 Make your way to the ferry docks and buy a roundtrip ticket to Bainbridge Island. Even if it’s a warm day, make sure to have a coat — it can get chilly out on deck. As you drift out into the Sound, take a gander back at the Seattle skyline: the Space Needle scraping against the blue sky, the obsidian-like windows of the Columbia Tower glinting in the sunlight. Notice the seagulls as they ride the draft, floating as though suspended in time.

Once you reach Bainbridge, you’ll have to disembark. Turn right around and line back up to head into the city again.

Being out to sea can strike up an appetite. Satiate your hunger with a Wagyu beef burger at The Palace Kitchen, a joint with subtle class and thick atmosphere on the edge of the Belltown neighborhood.

Seattle is known for it’s live music scene, and so hitting up a show while you’re in town is highly recommended. If jazz is your thing, head to Dimitriou’s Jazz Alley just around the way, although the atmosphere of the place varies widely depending on who’s playing that night (check out the online calendar before you go).

Otherwise, there’s always something going on at The Moore Theater — Billy Bragg will be there this June — or at The Showbox.

If you’re thirsty afterwards, grab a pint at The Pike Pub below Pike Place Market or The White Horse Trading Co. in Post Alley. A bed is just around the way at the Green Tortoise Hostel.

Hop aboard the Metro 10 to the Capitol Hill neighborhood. Disembark at 12th & Pine to find yourself at Crave, a hip brunch spot that bills itself as serving “contemporary comfort food”. Have a mimosa and then get down on a Crave Omelet: duck confit, shitake mushrooms and goat cheese. Enough said.

After breakfast, meander through Cal Anderson Park, observing the modern fountain sculptures on your way to Broadway. This is Capitol Hill’s main thoroughfare, home to a bizarre mix of record shops, cafes, second-hand clothing outlets and sex-toy stores. On a Sunday morning things will probably be pretty quiet, but you can at least get a sense for the neighborhood’s diverse demographic.

Grab the 49 to the University District, home of the University of Washington‘s flagship campus. As this is where I spent my freshman and part of my sophomore year, I’m a bit biased, but even still I have little reservation in describing the UW as one of the most beautiful campuses in the country — if not the world.

In spring, the cherry trees that line the main mall (known here as “the Quad”) burst forth like pink clouds tethered to the earth. A few hundred yards away, you can see Mount Rainier as it looms in the distance over Drumheller Fountain. Suzzallo Library, a gothic structure that more closely resembles an ancient cathedral, towers over Red Square — a massive open space that evokes images of communist Moscow.

Having toured the campus, make your way down to Boat Street and Recycled Cycles, where you’ll rent a Raleigh road bike for a half-day for $20. Roll up to the Burke-Gilman Trail and pedal westward. You’ll pass Gas Works Park, where you can grab a stunning vista of the city, and then head into the Ballard neighborhood. 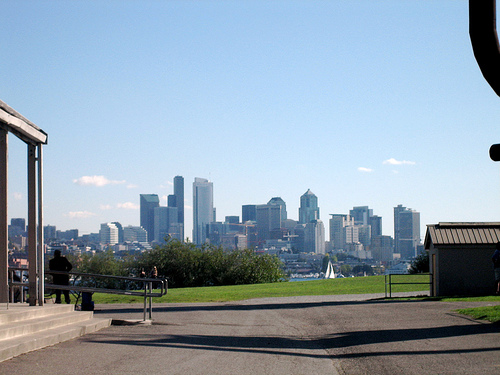 By now brunch is probably wearing off, and you’re looking for something to munch on. At Portalis on Ballard Avenue, an old brick lane that has grown increasingly trendy, have an early afternoon glass of wine along with a cheese sampler or a charcuterie plate. Feeling fulfilled, check out some well-priced outdoor gear at Second Ascent next door as you dream up your next big adventure.

Back in the University District, drop off the bike and grab an early dinner at Aladdin’s Gyro-cery — order a number 21 combo (a lamb and beef Gyro) and get rice instead of fries. If none of the food on this trip has left an impression on you, this will.

Of course, no trip to Seattle would be complete without a fine cup of coffee. For that, head just one block north to Cafe Allegro, the city’s oldest espresso bar. The coffee here is all fair trade and organic, and is roasted locally by Brown’s Coffee. Order a macchiato and a chocolate chip cookie, and enjoy both on the upstairs deck.

And as you bump back down to Sea-tac on board the 194, decide you’ll be coming back again next year — when you can take the train.