36 Hours in Johannesburg: Explore the Past, Present and Future of South African Apartheid

At more than two-thirds the size of Alaska, South Africa is a massive country – the world’s 25th largest to be precise. Throughout the last century, the effects of apartheid there were felt in every corner, every city, and every town in the country. But perhaps nowhere more so than in Johannesburg (“Joburg” as the locals call it) – arguably the epicenter of the rise and ultimate fall of state sanctioned apartheid.

It was here that Nelson Mandela and the ANC plotted the overthrow of the horrific, oppressive government regime; where the Hector Pieterson riots exploded in 1976 and it is home to the present-day townships of Soweto and Alexandra.

This brief tour of Joburg will take you through the past, present and future of South African apartheid. It’s an amazing history cast over centuries of human struggle and liberation – one that is simultaneously heartbreaking and inspiring. We counted it among our 8 Reasons to Drop Everything & Visit South Africa Right Now. Here’s why …

Begin with a tour of Liliesleaf. This relatively new and often overlooked destination appears to be little more than a small series of modest homes at first glance. In reality, it’s an interactive museum experience that honors South Africa’s remarkable heritage and the impressive trajectory of the country’s sociopolitical past. Once the headquarters of Umkhonto we Sizwe, the military wing of the ANC and the Congress Alliance, Liliesleaf is a landmark of apartheid. (View tour hours and rates) 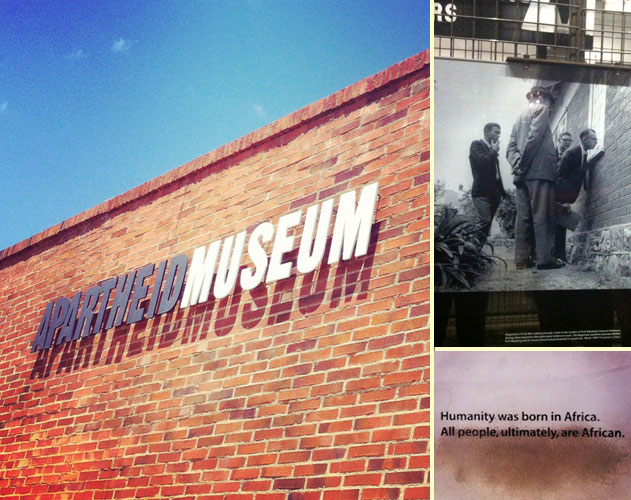 Continue on to the Apartheid Museum — widely acknowledged as the preeminent museum in the world dealing with 20th century South Africa, at the heart of which is the apartheid story. It’s one of the most well-done museums I’ve ever visited with a long series of fascinating exhibits that cover centuries of the country’s history.

Do yourself a favor and spend some time here. It’s extremely comprehensive and will take the better part of an afternoon, but it’s the cornerstone of any effort to understand South African history. (View tour hours, schedule and directions) 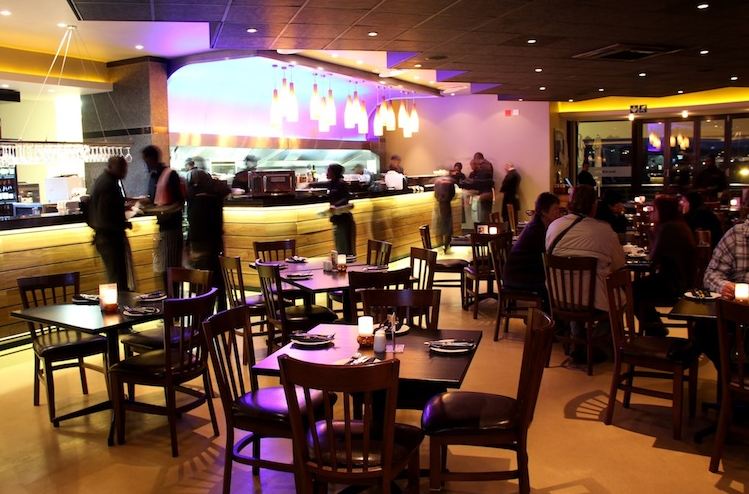 Family owned and operated for more than three decades, Turn ‘n Tender is a Joburg institution. While the menu offers an extensive selection of seafood and other entrees, they’re best known for the perfect steaks. So much so that, upon suggesting I might order the calamari, I was almost heaved out the front door by my native Joburg dining companions. It was clearly “go meat or go home”. Fair enough!

I opted for the spiral cut Argentinian Steak, topped with chimi churri marinade and cooked to tender (obviously), flavorful perfection. Note that the portions here are [ahem] ample. Every one of us ordered some semblance of fantastic meat plate and every one of us had to (almost literally) be rolled to our cars at meal’s end.

Situated in the heart of Joburg’s trendy Rosebank suburb, 54 on Bath reopened in July 2012 after an extensive remodel. The new digs are sophisticated with modern touches all-around. It all works to create an intimate, welcoming vibe reminiscent of a classy boutique hotel.

Guest rooms are elegantly styled – some with sweeping views of the hotel garden or (as mine was) the skyline of Joburg. Seeing miles of blooming jacaranda trees from high above the city in late October is truly stunning.

Other amenities are exactly what you’d expect from an upscale hotel – Wifi, work desk, blackout curtains, insanely comfortable bed – and some you wouldn’t, including a large soak tub with stand-up shower and an in-room espresso machine (the latter saw an awful lot of use during my stay!).

Head down to Level 4 – the hotel’s onsite restaurant – for a complimentary a la carte breakfast. Though I didn’t try everything, I highly recommend the Eggs Benedict which was superb.

10:30am / Tour the Townships of Soweto and Alexandra

The townships of Soweto and Alexandra, among others, are where many South African people are today. They were formed by the growing eviction of Africans by government authorities and stand as a present day reminder of the lasting, reprehensible effects of apartheid.

Soweto (an acronym of South Western Townships) is comprised of four-room “matchbox” houses – built by the government to provide cheap accommodation for black workers during apartheid. 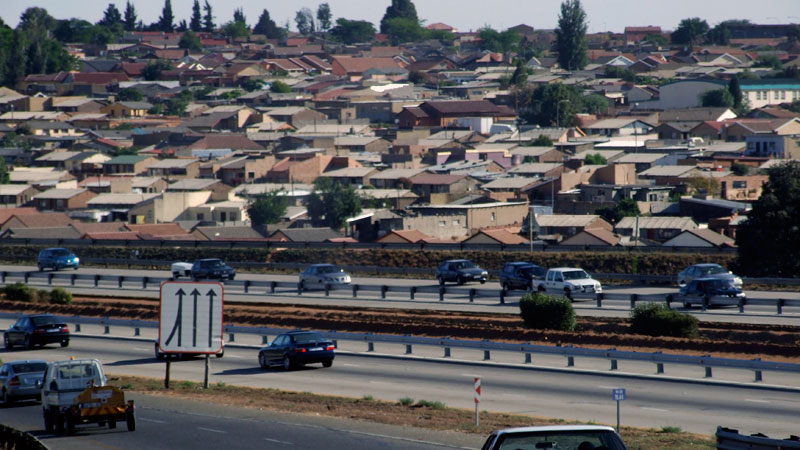 While in Soweto, ensure you a stop at the Hector Pieterson memorial. This young boy:

… became the subject of an iconic image of the 1976 Soweto uprising in South Africa when a news photograph by Sam Nzima of the dying Hector being carried by another student while his sister ran next to them, was published around the world. He was killed at the age of 13 when the police opened fire on protesting students. For years, 16 June stood as a symbol of resistance to the brutality of the apartheid government.

Today, the memorial stands as a reminder of the more than 400 people who died so tragically in the uprising.

Alexandra Township is the embodiment of some of the worst remnants of apartheid. While the area was originally designed to house 70,000, today as many as 750,000 call it home. These people struggle with a city infrastructure constantly on the verge of collapse – frequent power outages, sewage problems and little or no running water. It is, as our tour guide informed us, where people from Soweto go when they want a “real township experience”.

That said, I’ve never seen so many children and families playing and laughing together. Our van was greeted with smiles and waves around almost every corner. Which bring us to … 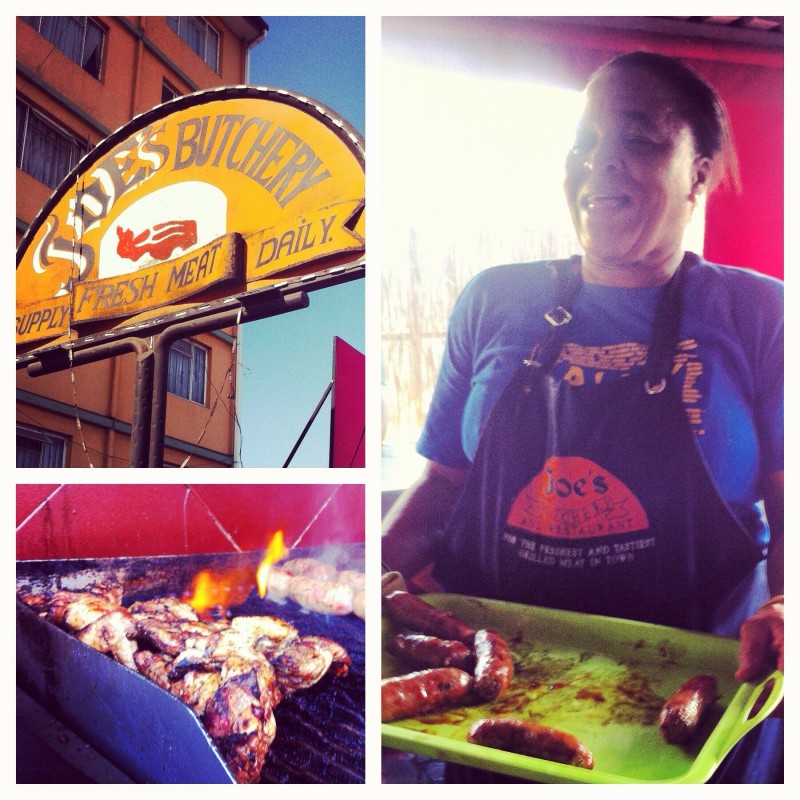 Given the harsh details of Alexandra Township, it’s difficult to imagine that you’d find a remotely decent (let alone fantastic) restaurant there.

Alas, in an area most travelers would never consider visiting, Joe’s Butchery is quite a surprise. It’s a laid back, no-frills meatery without the slightest hint of pretense. A steady parade of sausages, chicken and steak streams from the open grills to a small set of communal picnic tables where everyone dines together.

On weekends, a DJ booth draws in hundreds of locals (and lost or in-the-know travelers) with a more boisterous, party vibe:

Incidentally, during our trip to Joburg, this was hands-down my favorite experience – dining or otherwise. 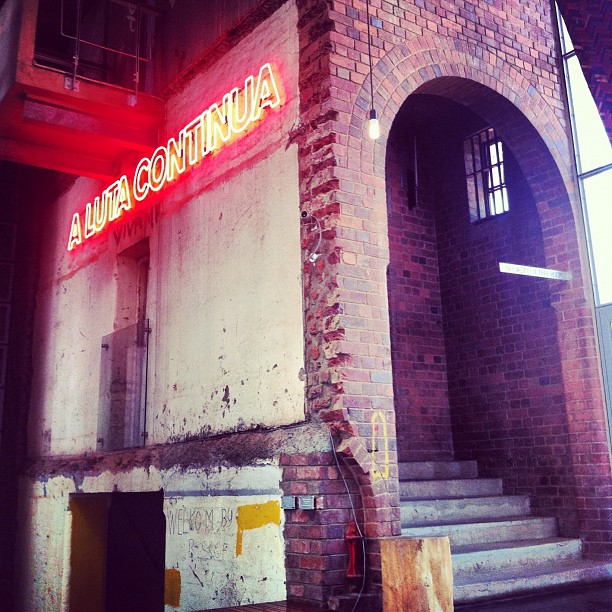 “The Struggle Continues” / The Constitutional Court of South Africa, Johannesburg

End with a tour of the Constitutional Court of South Africa. Established in 1994 after the official end of state-sanctioned apartheid by the country’s first democratic constitution, the duty of the court is “to uphold the law and the constitution, which is applied impartially and without fear, favour or prejudice”. This landmark embodies the true spirit of modern South Africa and where its people are headed today.

It’s open to all 365 days a year and best done with a tour guide to fully appreciate the architecture, history, and extensive art installations. For a government building (more precisely: the highest court in South Africa!), it’s uniquely warm and inviting. 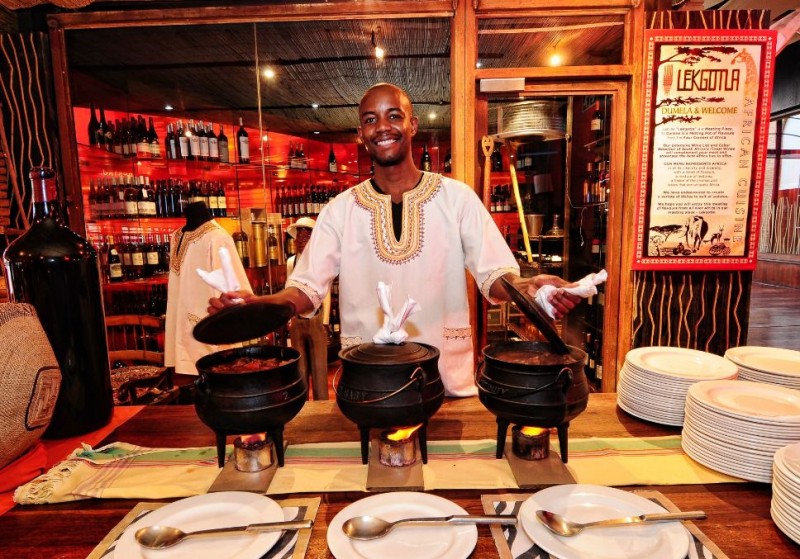 Lekgotla (literally “meeting place”) is a melting pot of cuisines from the four corners of Africa. This upscale restaurant located on Nelson Mandela Square showcases distinguished African decor and a fantastic menu of cocktails, curries, and game meats. Stick around for the occasional drum circle or native ritual dance routines.

While every experience above can be self-guided, the history of apartheid is extraordinarily complex. Our tour was made infinitely better with knowledgeable tour guide, Robin Binckes, from Spear of the Nation. Binckes is South African born and lived through the events surrounding apartheid over the past few decades. Today, he is widely regarded as one of South Africa’s top history guides.

… if you want a deeper understanding of this complicated, fascinating city, you must call Robin Binckes, tour guide extraordinaire.

A first-class storyteller, Binckes has a knack for finding the off-the-tourism-radar sites that bring alive the country’s history and put it in context.

I’m rarely a fan of guided tours, but his first hand experiences and insight proved invaluable during our two-day tour of Joburg. I can’t recommend him more highly.

Have you visited Johannesburg? What were your impressions? Share your thoughts in the comments below!