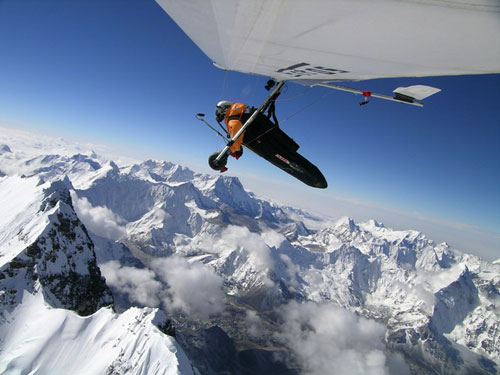 Imagine: you’re scaling the northeast peak of Mount Everest along with an Italian expedition. Suddenly, a dark shadow catches your eye and a large bird-like contraption is drifting without a sound in the sky above you. It’s not a plane, nor a bird. Suddenly you notice there’s a man attached to it and he’s waving at you. From over 30,000 feet.

Everest climbers during the 2004 season bore witness to such an event. The man, known as the “Human Condor”, was Angelo d’Arrigo – an Italian aviator and apparent madman with testicles the likes of which this world has never known. That season, he had succeeded in flying the first hang glider over the summit of the tallest mountain on Earth.

His flight was documented in the film “Flying Over Everest”, in which he recollects the key moment of his journey:

The flight was extraordinary. I took off from the Khumbu Valley and flew over [the peaks of] Namche, Amadablam, Nuptse and Lotse until I reached Everest, where I saw the Italian expedition climbing the northeast peak, and they saw me too.

South of Everest and close to the peak, we ran into a gigantic area of rotor turbulence, which dragged the microlight violently downwards, projecting me in the hang glider upwards at the same time.

We were at a height of about 9000 meters; I was 500 meters south of Everest, about 150 meters over the peak… This was the moment, flying over Everest! I had succeeded in the attempt to fly my hang glider over the highest mountain in the world.

Angelo died in March of last year during a tragic air show accident, however his website lives on in his memory and details much of his fascinating journeys and life’s work.