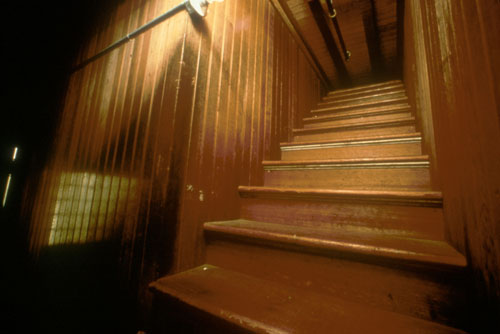 A mansion in San Jose was built to confuse ghosts.

It has one-hundred and sixty rooms, four-hundred and sixty-seven doors, and forty-seven fireplaces. But many of the cabinets open to blank walls. Stairways wind around in circles, or run straight into the ceiling. There is at least one door that opens up into a ten-foot drop to the ground.

It was built for the widow of the gun magnate, William Wirt Winchester. The recent Civil War had left millions of young men to rot on battlefields, underneath calvary horses and ridden with musket balls. Many of these musket balls were fired from Winchester rifles. And so Mrs. Winchester thought that the spirits of those killed would come back to haunt her.

This house was continually built, twenty-four hours a day, for thirty-eight years – from 1884 to 1922. Legend has it that Mrs. Winchester’s spiritual medium had advised her to move west in the first place – and told her that if building ever stopped, she would die. Construction only stopped when she did, in fact, do just that.

The mansion is now a gigantic tourist attraction. In the gift shop, they sell shot glasses in the shape of shotgun shells.