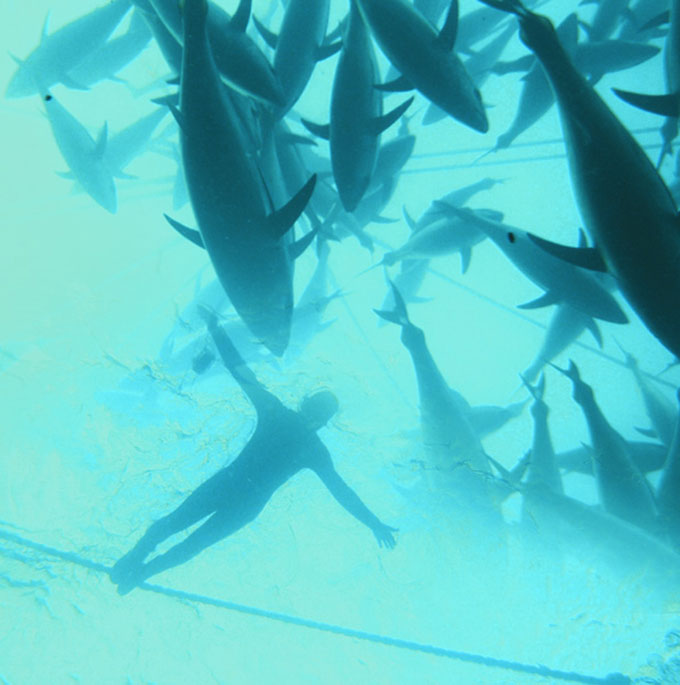 Inland experiences include close encounters with kangaroos, emus and soaring eagles. The varied landscapes range from secluded beaches to towering limestone cliffs, ancient granite outcrops and the vast emptiness of the Nullarbor Plain.

On days four and five of our South Australia tour, we’ll experience the best, can’t-miss wildlife experiences the Eyre Peninsula has to offer.

Swimming with the Tuna in Port Lincoln

Our first stop takes us to Port Lincoln, home of Adventure Bay Charters. This family-owned business is headed by Matt Waller, a fourth generation fisherman who is passionate about the fishing industry and sharing his knowledge with others. He’s a likable, no-nonsense guy who leads our tour with the wit and whip smart delivery of someone who’s done this all his life.

While ABC offers a variety of tours, we’re here for just one thing: to get up close and personal with the port’s world famous Bluefin Tuna.

On our brief boat ride to ABC’s own purpose-built tuna farm, Matt takes the opportunity to educate us about the intimate workings of Port Lincoln’s fishing industry. As a lifelong fisherman here, he’s immensely passionate about fishing and about the town and its people.

He explains how our finned friends for today have been in the farm — with nothing to do but eat and swim – for about a year to fatten up. They weigh between 7-30 kilos — mere babies. Wild specimens have been known to tip the scales at over 1,000 pounds, with the world record being nearly 1500 pounds! 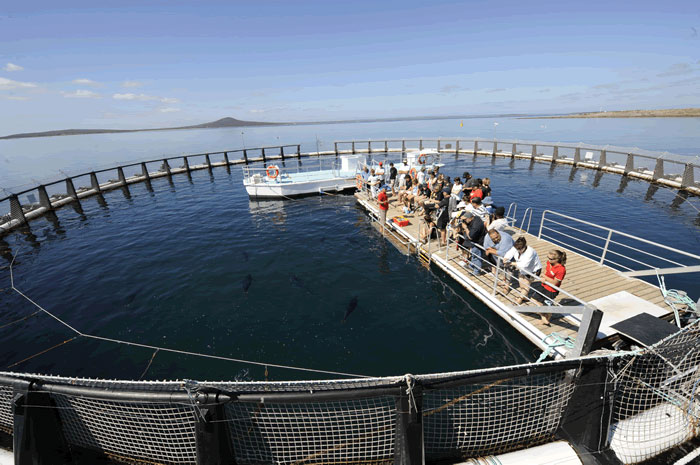 Before we dive in, Matt demonstrates the tuna’s awesome speed and power. Gathering our tour group on the feeding platform, he points to a spot in the water thirty feet away and tosses in a handful of sardines. In less than a second, they’re gone. Which is to say: these fish are incredibly fast and almost unnaturally agile. 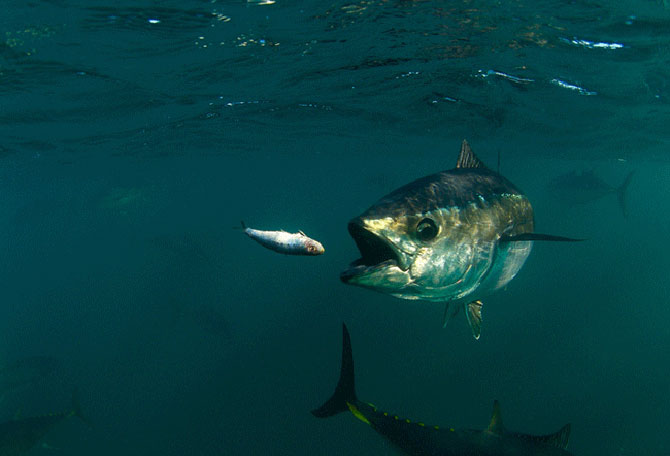 I waste no time jumping in and the water is [ahem] brisk to be sure. As a hearty New Englander, I’m entirely in my element though. Others on the tour don’t last long, even given the 7-mil wet suits and hoods.

We’re afforded plenty of time to leisurely swim among the bluefins for a half hour. Every so often, Matt tosses a handful of sardines just in front of our masked-faces. Watching a 60-pound fish devour a sardine six inches from my face — at over sixty miles an hour — is an unforgettable experience. What’s more is their agility ensures that they never so much as you flick you with a fin. Just remember to keep your fingers close to your body and you’ll be completely safe. Probably.

Our next stop takes us to Coffin Bay – so named for Sir Isaac Coffin and not what you might expect. We board the Coffin Bay Explorer for a unique journey to some of the most pristine waters and coastline found anywhere in Australia.

As a local, family-run businessman, Darian Gale, our guide, will show us some of the true hidden beauties of coastal South Australia. The coastline is peppered with a menagerie of birds, including pied cormorants and gulls, seals and sea lions. We’re educated on the Australian habit of labeling black-and-white birds as “pied”; while jet-black specimens are called “sooty”. Who knows exactly why, but it’s charmingly Australian. 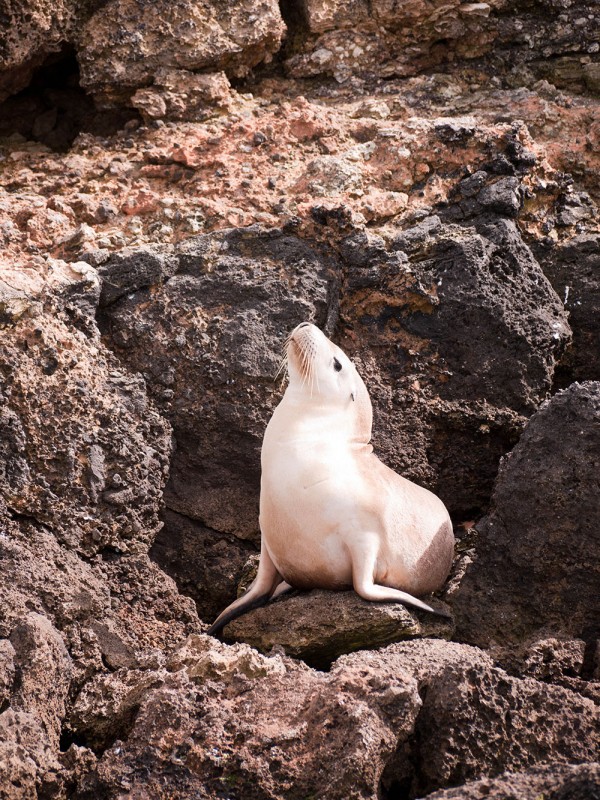 Among many other things, Coffin Bay is perhaps best known for its oysters — approximately 80,000 dozen are harvested here every week. That’s nearly two standard trailer truck loads! The turnaround point for our boat tour is a vast oyster farm, where Darian stops to pull a hefty netted bag — an oyster pot – from the water. He illustrates the time-consuming and skilled process of opening and preparing an oyster. 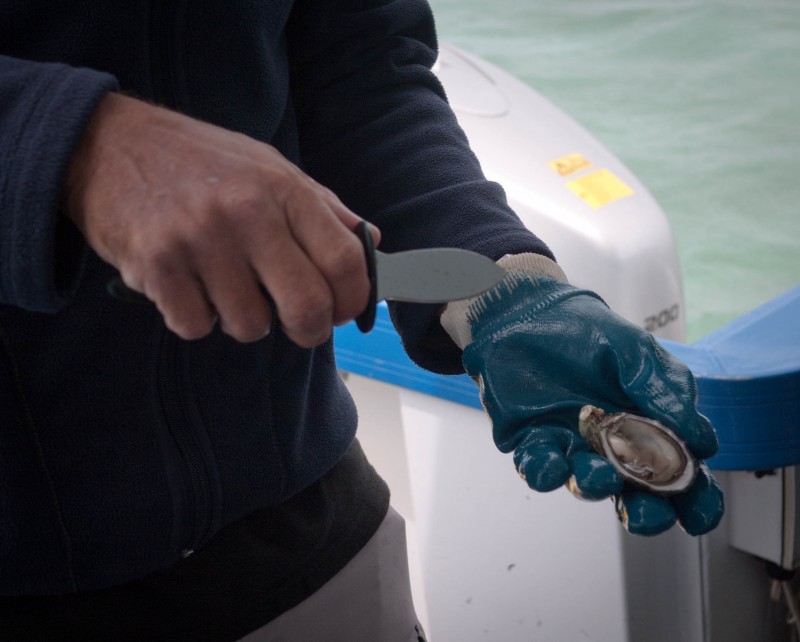 Seafood aficionados, take note: there’s nothing quite like sampling a fresh oyster pulled straight from the ocean. The average restaurant simply doesn’t have sea water on tap to clean their raw bar offerings. Instead, fresh water is used which softens the oysters and eliminates their great, natural taste. Truly fresh oysters are much firmer, saltier and, honestly, better. It’s a can’t-miss experience while in the Eyre Peninsula. (Tip: skip the usual splash of lemon — at least for your first wild oyster — to truly experience the taste, texture and freshness)

Chasing Emu and Coddling a Kangaroo in Lincoln National Park

For the pinnacle of our day on the Peninsula, we meet up with guide, Phil Porter, from Wilderness Wanders who has a rather unexpected surprise for us. He’s brought along an eight month old kangaroo joey named Oliver for today’s ride.

As luck would have it, Phil and his wife have a special Wildlife Rescue Permit that, for the past few years, has provided them with a number of injured critters in need of a little TLC. Kangaroos in Australia are as ubiquitous as deer in North America, which is to say they sometimes fall victim to car accidents and the like. In cases where the victim is a female with child, the joey may survive the otherwise fatal accident. The Australia park service then calls upon kind folks like Phil to nurse these creatures back to health. 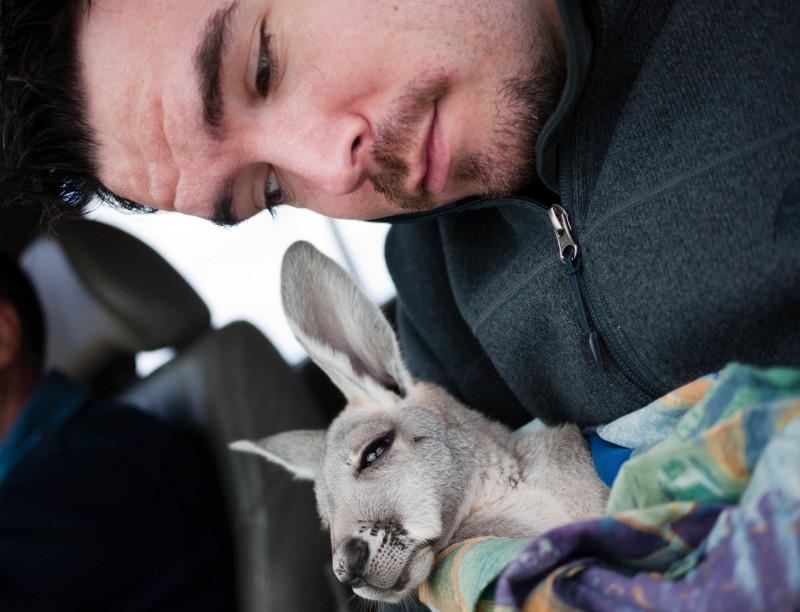 Because these little kangaroos will never learn to fend for themselves in the wild, Phil houses and cares for them indefinitely. This is no small task given that red kangaroos grow to over seven feet when standing tall. Fortunately, human-raised joeys are very docile, even loving.

Which is why, every so often, Phil brings his marsupial “patients” along for wild dune tours of Lincoln National Park. It’s a vast system of seemingly endless sand dunes where abundant wildlife – kangaroos, emus, sea eagles and countless native birds – thrive. Phil educates us on local bush-foods, commonly used by aboriginal communities and explorers in the past. 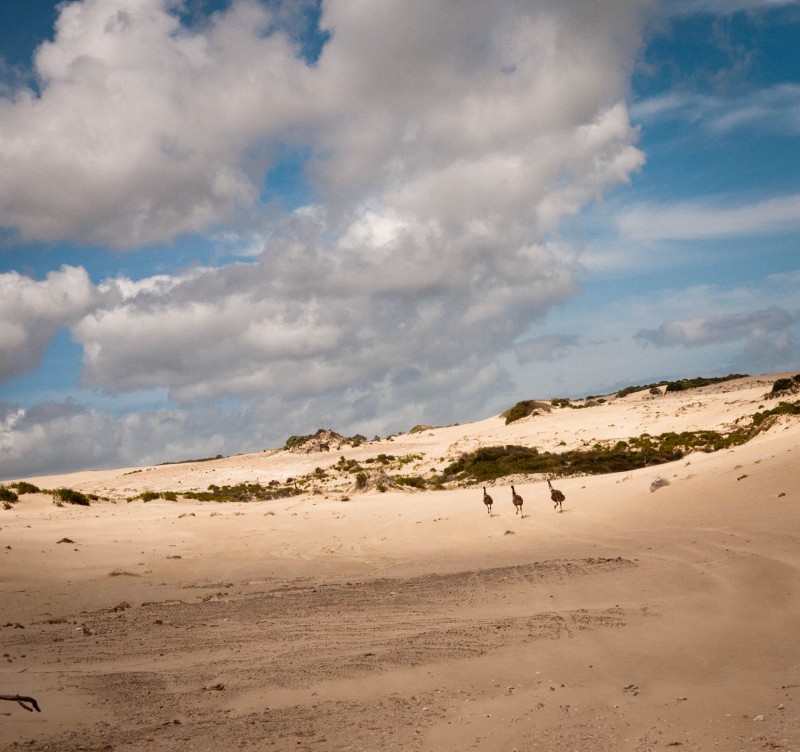 The park also houses a series of stromatolites – remnants of the oldest form of life on earth, in excess of two billion years. They’re of monumental significance to historians and geologists and it’s quite humbling to find ourselves in the presence of such ancient fossils.

The park also encompasses a number of scenic coastal drives along its outer rim. Among our well-traveled group, there’s a unanimous sense that these are some of the most beautiful turquoise beaches we’ve seen anywhere in the world. Although these geographically unprotected waters are immensely rough almost every day of the year, they’re unusually calm today. It’s humbling and beautiful — another perfect ending to our time here on the Eyre Peninsula.

Oh, and if you haven’t yet entered to win Unlimited Flights to Australia for One Year ”¦ well, why not? It’s stupid simple and doesn’t take more than a minute to enter!