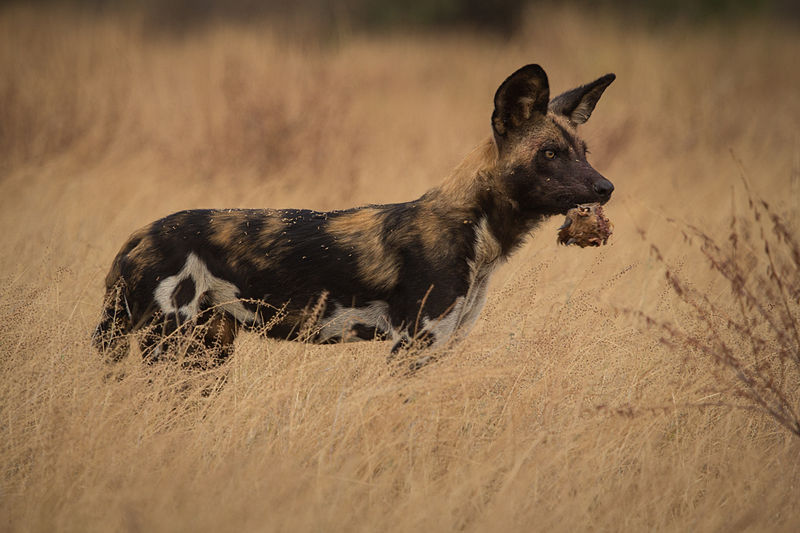 On the Hunt for South Africa’s Most Endangered Carnivore: The African Wild Dogs of Mkhuze

The dead impala at my feet was starting to leak. We’d collected it from the skinning shed half an hour earlier, still ice cold. Now it was beginning to thaw under the harsh African sun in the back of our pickup truck. I couldn’t stop staring. The poor, headless boy had seen better days.

Let’s be honest: with so much in the bush ready and able to kill a man, exploring the South African savannah with a bloody carcass in tow is just plain stupid. I turned to Cole with the obvious question:

“Is it not a little insane to be driving this vast open space full of hungry predators with a bloody animal carcass? Isn’t it possible we’ll attract the “wrong attention”?

Cole shrugged. “Not only possible … but likely.”

A victim of culling, this impala will fortunately not go to waste. We stop at a nearby boma that’s protected by a high, electrified fence. Inside, I’m advised to keep my head on a swivel and, for the love of god, do not get out of the truck. I do as I’m told. The carcass is dragged from the truck bed and tied to a tree to prevent theft by vultures.

This is all textbook, part of the thrice weekly feeding of Mkhuze Game Reserve’s two resident African wild dogs. And the dogs know it well. Our presence puts Zeus – the alpha dog – on high alert. He’s cautious, but confident. Ears perked, mouth shut, he has the look of a stray dog (a very large stray dog) who’s either going to lick or disembowel me. He hasn’t decided yet.

After the first attempt, Cole doesn’t seem pleased with his lashing job of the carcass to the tree. He fumbles with it some more, tugging hard several times for good measure. It’s during this lollygagging that I recall this fun fact (backed up from Wikipedia) from my first day at the reserve:

Nearly 80% of all wild dog hunts end in a kill; for comparison, the success rate of lions, often viewed as ultimate predators, is only 30%.

Eight out of 10. Nearly three times as effective as a lion. I’m fully exposed in the back of this truck and our minutes-long visit feels like an hour. The dogs are slowly beginning to pace. They step towards us, then towards the carcass. Then back off and stop. Circle round once more and stare us down, sniffing the air.

Deep inside those canine brains, decisions are made in those few seconds that could gravely affect our future. I’m snapping photos with the voracity of the paparazzi, but I’ve had my fill. And it’s time to go.

With everyone in the truck accounted for, we lock the boma tight, and we’re on our way. I look back through the cloud of debris circling above our tire tracks. Within sixty seconds, the dogs are eviscerating the impala with an unbridled savagery seen only in chum-fueled shark attacks. The sound of gnashing teeth and tearing sinew is one I’ll never forget.

This isn’t the South African safari “vacation” most people envision.

Welcome to Mkhuze: This Is Zululand … NOT Disneyland!

But this is no vacation and no ordinary game drive. I’m riding alongside researchers from Wildlife ACT Project – a volunteer organization that works to conserve threatened and endangered species in several key reserves throughout South Africa.

Wildlife ACT is fond of reminding volunteers that “This is Zululand … NOT Disneyland”. Conservation is dirty work. Long, tedious days spent tracking collared animals morning and night, keeping a constant eye out for poachers, sleeping in open research camps with spotty electricity, and the ever-present wonder which animals will wander in.

News on the reserves changes daily, sometimes hourly. Animals are lost, killed, born, disappeared, and poached. Every day spent in camp can bring sheer elation or heartbreaking devastation for the folks here. And few experience it more fully than the onsite staff.

Cole du Plessis is an Endangered Wildlife Monitor with Wildlife ACT at Mkhuze. It’s a position that has brought him closer to the park’s wildlife (and its African wild dogs in particular) than he ever imagined. His Twitter feed is peppered with the emotional ups and downs of daily life inside the reserve. One day, this:

… then just this past Saturday:

Beautiful start to the morning. Saw all the dogs after not seeing them yesterday.also brown snake eagle catching a lizard:) @wildlifeact

For these reasons, Wildlife ACT brings in volunteers for an honest experience of daily life at their camps. It’s not for everyone. It’s not a “vacation” and it isn’t easy. It’s real and visceral and a life-changing experience for many. This company speaks and acts for these animals simply because they can’t do so for themselves.

Each camp primarily focuses on one or two species. In Mkhuze, they’re tracking, researching, and ultimately conserving elephants, black rhino, leopard vultures, and cheetahs. But more so than any other, they’re focused on a pack of rare African wild dogs – South Africa’s most endangered carnivore.

The pressing need to track this particular pack of Wild Dogs on Mkhuze Game Reserve, is due to the fact that Mkhuze Game Reserve suffers from an influx of poachers, since ¾ of the reserve is surrounded by local rural communities who consistently trespass onto the reserve to set snares with the intention of catching bush meat (mostly antelope).

Tragically, these snares have a large unintended by-catch, which includes any unsuspecting animal that walks into the snares — including Rhino, Elephant, and very often the Wild Dogs since they cover such large distances daily in search of food.

For this it is absolutely vital that the monitoring team locates the Wild Dog pack each morning and evening and ensures that all the dogs are accounted for and unharmed.

Estimates put the dog’s numbers around 400 in the whole of the country – a country roughly two-thirds the size of Alaska. Which means the likelihood of seeing a wild dog actually in the wild is slightly above spotting a pink unicorn.

Now more than ever, the health and well-being of the park’s lone pack of six dogs is a grave concern. Only three are collared and the batteries in one of those transceivers are dead which leaves only two active. The staff are waiting patiently on a vet to come and help collar the remainder of the pack.

What’s more: the alpha female is pregnant and expected to give birth any day now. The fate of the entire pack hinges heavily on these new pups. A healthy litter means the pack’s numbers could more than double overnight. And out here in the wild – under constant threat from other carnivores, poachers, and nearby farmers who don’t take kindly to the dogs stealing their livestock – there is great strength in numbers.

During my five-day visit in April 2013, we track the pack morning and night. Our group rises at 4:30 am every day. And, in the first four days, we catch only a glimpse of three of the dogs. Cole marks every sighting on a ledger, detailing critical tracking information including GPS coordinates, time of day, how many were spotted, and the tracking classification. In this case, an “A” sighting that indicated a full visual — the best we can hope for.

Cole’s tracking skills are impeccable and no one knows the pack’s daily ritual better. They typically head out early every morning, feed, then head back to the den where they regurgitate the food for the mother (and hopefully pups). Then it’s back out to feed themselves. He can almost set his watch to their routine and he takes great comfort in that. So just one sighting in four days is unnerving to say the least.

On Sunday – day five and my last in camp – we awake around 5 am (“late”) and I’m excited but tentative. The first rule of nature watching (or in this case tracking) is patience. We’ve had four days of near-zero activity from the dogs and I don’t want to set my expectations too high.

Suddenly, within the first thirty minutes of our early morning drive we spot the pack. It’s only five of the six dogs – the mother is presumably back at the den but we’re not picking up a tracking signal on her so we can only assume. The pack is on the dirt road heading towards us. Directly towards us and moving fast.

They travel in a tight-knit formation, stopping frequently to sniff the air and ensure the entire pack is still together. The lead dog breaks from the pack quickly to chase down an impala, probably unsuccessfully. Cole tells us that he’s the fastest and strongest of the group but unfortunately he’s a bit trigger happy. He’ll often chase prey for a kilometer or more away from the pack, get lost, then have to backtrack to find them.

Every dog in the pack has a distinct personality. The most curious – the alpha of the pack – stops suddenly at our truck where I’m perched (yet again) in the bed. The others continue past him, but he’s unaware. He’s seen something in us that’s piqued his curiosity. He moves around us in a slow circle towards the back of the truck.

Wildlife view vehicles as a single unit (regardless of how many individuals are actually inside) and predators in particular will attempt to get behind the vehicle. It’s a dominant position that allows them to attack from the rear if need be.

I flashback briefly to that day at the boma, when the penned dogs were so careful and cautious. Now, we’re in his space and he’s completely at ease. He steps closer, then closer still.

From inside the truck, Cole watches the alpha’s approach and whispers two barely audible words:

At less than thirty feet away, he stops. Our eyes lock and I’m completely still. With my camera resting on my knee, I’m pushing the shutter button and listening to it snap photos as fast as the memory card will allow.

He lifts his head to sniff the air one last time, before turning and darting away. The exchange lasts less than ten seconds before the entire pack disappears with perfect camouflage into the high grass all around us. And that was the last we saw of the dogs in Mkhuze.

Every day ends with question marks and ellipses … what will become of the pack in the coming months? Is the female denning? Or was she killed off by a local farmer? And, if she survives as a mother, what of her pups and what they mean for the pack’s survival?

It’s an ever-changing landscape and, for Wildlife ACT workers and volunteers, it’s clear that their work is never done.

Join Wildlife ACT for the Volunteering Experience of a Lifetime

Wildlife conservation is an extraordinarily important topic in all of Africa. For many in the US, it’s often an issue that’s difficult to fully appreciate until you’ve witnessed it firsthand.

No company that I’ve worked with has ever shown the passion for their work and the compassion for the wildlife that they work with more than Wildlife ACT. Mine was a trip that left an indelible mark on me as a traveler and a human being. It was truly unforgettable.

If you’re interested in conservation, volunteering, wildlife in general, or are simply looking for a break from the “traditional” safari (and don’t mind getting your hands dirty), I can’t recommend Wildlife ACT more highly!