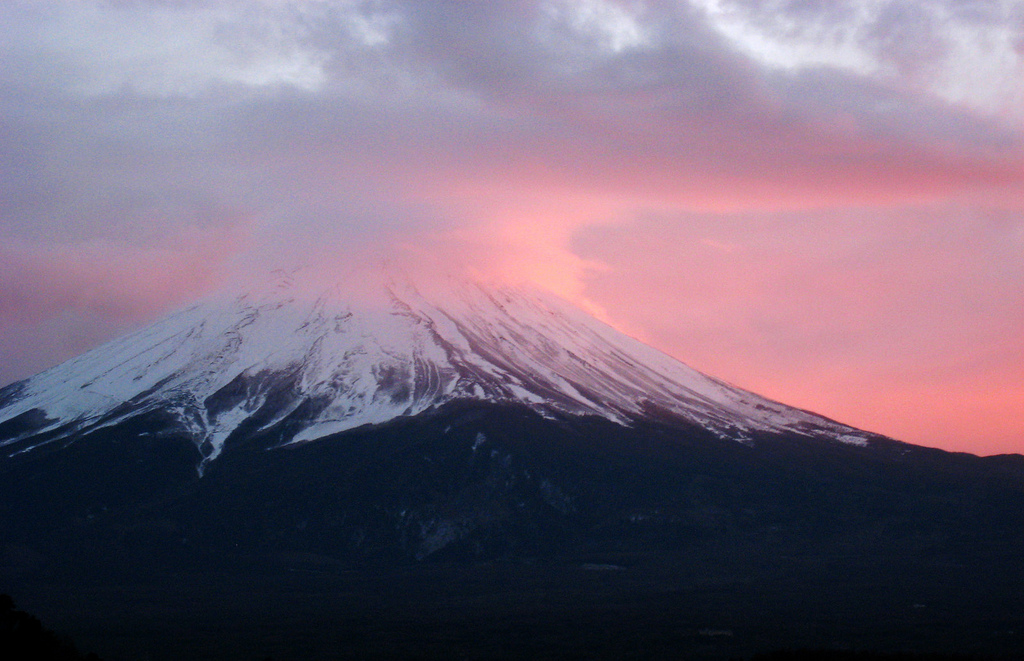 Despite the fact that I’d been on a near-vertical climb through the rain and fog for the previous five hours, I had yet to reach the summit. Cold, wet and exhausted, my blistered feet and swollen hands ached as I limped up the side of Mount Fuji; the most visited mountain in the world and the second tallest peak in East Asia. It was one in the morning, raining and counting the wind-chill factor, about twenty degrees Fahrenheit. The wind sliced through my thin, salmon-colored gloves like knives through sushi. Understandably, the last thing I wanted to be doing in those conditions was marching up a mountain wearing little more than a pair of rain-soaked khakis and a shredded poncho. 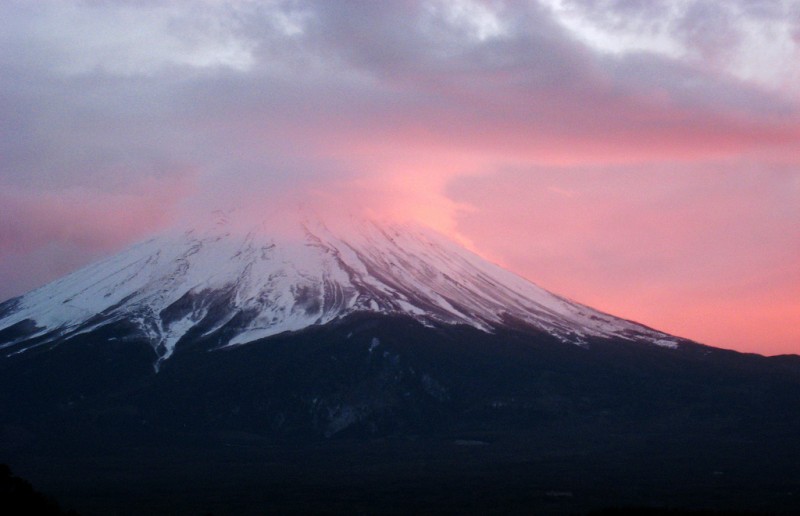 Miserable as the weather may have been, the worst part of my predicament wasn’t the rain or cold or even the sleep deprivation. It was that I was lost. I’d just discovered that the person in the red poncho I’d been steadfastly following for the past twenty minutes wasn’t my 40-year-old male hiking buddy from Montreal, but an elderly Japanese woman. I had no idea where my buddy, or for that matter, my 40-person hiking group and two guides, had disappeared to; a predicament that wouldn’t have happened if I had arranged my hike through a Japanese tour agency.

Because unlike the American owned and operated tour group I’d booked through, the Japanese-guided groups were organized. So organized in fact, the Japanese guides more closely resembled generals of an army than sherpas of a mostly 60-plus set of senior citizens. The guides blew whistles, waved flags and marched their hikers up the mountain in neatly ordered lines like they were leading soldiers to battle. “Ganbatte!” they repeatedly hollered in hoarse voices whenever their troops started to lag behind.

”˜Ganbatte!’ had become the battle cry of the evening. It roughly translates into ”˜work hard’ and was the go-to expression in Japan for anyone wanting to offer encouragement to someone facing a challenging situation. It was fitting for our current situation because if we were to succeed in scaling the haggard face of old ”˜Fuji-san’ as the Japanese called him, we would need to work hard. Very hard.

This was a concept that the mostly twenty-something American and British expats in my group seemed to not have understood. In sharp contrast to the professionally-attired Japanese hikers (with their walking sticks, oxygen canisters and headlamps) my group hardly seemed prepared to hike a hill, let alone a 12,338-foot volcano.

One person had worn a garbage bag instead of a rain jacket and another, high-tops instead of hiking boots. Several had stuffed their packs full of beer. And at least two people had arrived at the base of the mountain direct from the basement of a downtown Tokyo club, still riding on the fumes of their drunken party from the night before.

Given the circumstances, it didn’t seem likely they’d successfully reach the summit. After all, as our guide had reiterated several times on the bus ride to foot of the mountain, this would not be a ”˜Japanese-style’ hike. There would be no hiking in a long line or role-calls or even waiting around for the slower-paced hikers to catch-up. We were each assigned a buddy and given a map and told that if we got lost, we were to meet the group back at the fifth station camp by three o’clock the following day. If we weren’t there, the bus would leave the mountain without us. There would be no waiting and no search and rescue party. It would be every person for him or herself.

Prior to moving to Japan to teach English, I’d never realized how much culture could influence something as fundamental as mountaineering. I considered the desire to overcome obstacles and explore new terrain to be a human trait that superseded country or cultural lines.

But according to Japanologist Boye Lafayette De Mente, author of Japan’s Cultural Code Words, culture can in fact play a significant part in people’s travel preferences. Western cultures like those in the US and Western Europe are ”˜individualist cultures’ where assertiveness, independence and self-reliance are qualities to be revered.

The Japanese, on the other hand, are part of a ”˜collectivist culture’, which means they favor interdependence over autonomy. They need to be part of a group in order to feel at ease in their own skin. Researchers Ahmed and Krohn, authors of a study entitled Understanding the Unique Consumer Behavior of Japanese Tourists, cite this as well as the idea that there is safety in numbers, as reasons why guided tours have been such a success.

Guided tours, according to the Encyclopedia of Contemporary Japanese Culture, have existed in Japan on a major scale since the 1960’s and 70’s. But what’s perhaps most surprising, is that their origins go back even further, to the turn of the 17th century.

The ruling party in Japan during that time, in an effort to prevent an uprising, placed severe restrictions on its citizens. According to Boye Lafayette De Mente, one such restriction was to limit travel to only select members of society. Sword-wielding Ninjas patrolling the paths would execute anyone caught gallivanting around alone or without permission or the proper paperwork. On an island where even so much as a morning stroll could cost you your head, it’s easy to understand how a fear of exploring alone could be conditioned into the Japanese psyche.

It wasn’t until recently that the Japanese even hiked at all and until the 20th century, the only people to have ever climbed Mount Fuji were monks on religious pilgrimages.

Now, as I continued to inch up the 200,000-year-old volcano, I could understand why. The combination of thin, mountain air and freezing temperatures would be enough to scare away all but the most determined and I wondered for perhaps the tenth time, if the sunrise view from the top would be worth losing a limp or sanity in the process. 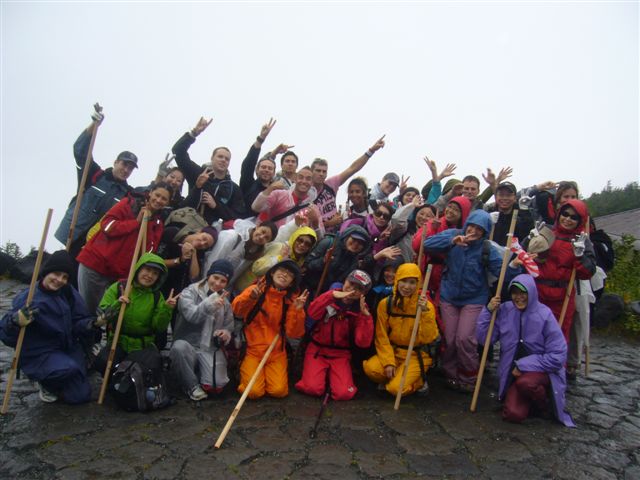 As the line along the narrow trail picked up pace, I followed behind the crowd as we strained to haul our tired bodies up and over the boulders. All around me, Japanese tour groups and foreigners were doing the same. The trail was so crowded now that it was difficult to see where one group ended and the other began. Caught in a sea of humanity on the dark peak, we were like one giant, school of red, yellow and white ponchoed fish, struggling against the current as it threatened to pull us into the whirl of inky darkness below. While we may have hailed from vastly different cultures and corners of the globe, our goals during those moments on the mountainside were one and the same: survival.

I would later locate the rest of my group at the top of the summit; sandwiched between several boulders and a herd of Japanese hikers. As I collapsed next to them, someone handed me a beer and then together, we foreign expats and Japanese alike, shivered in the mist and waited for the sunrise.