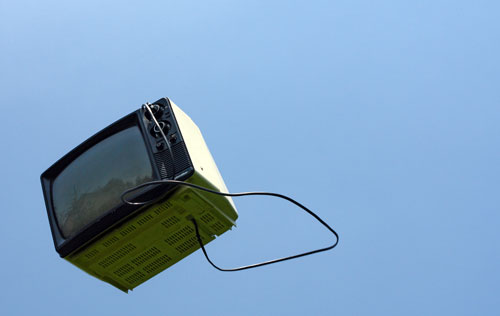 Why I Travel: Television Made Me Do It!

Just for the record, let me first say that I’m a fan of the Viator travel blog and an avid daily reader. With that said …

I read Scott McNeely’s recent piece entitled Why We Travel and I have to say that it struck a real chord with me. It’s condescending, self-righteous and just plain irritating.

In much the same way that my grandparents heralded disco music and bell bottoms as the end of civilization and my parents thought my first Nine Inch Nails CD was my fast track to Satanism, Mr. McNeely blames the imminent and ultimate demise of “real” and fulfilling travel among today’s youth on (what else?) television:

Have you noticed the latest trend in travel?

This deceptive opener really should be:

Have you noticed the latest trend in travel television?

The post has little to do with what’s wrong with travel and everything to do with what the author feels is wrong with travel television. If there’s some correlation or connective tissue between the two, Mr. McNeely fails to lay it out for us. He instead makes the naive and baseless presumption that, because travel television is bad (his sentiment, not mine), it certainly must be influencing the impressionable minds of today’s traveling youth.

TV executives know a good thing (read: money maker) when they see one, and the combination of far-flung locations and people doing all sorts of stupid things was ”” and still is ”” a tempting concept. Witness the latest crop of reality shows. I’m talking about 1,000 Places to See Before You Die, Bizarre Foods, The Best Places to Find Cash and Treasure, Man vs. Wild, I Shouldn’t Be Alive, Going Tribal, Everest: Beyond the Limit, Survivorman …

And here’s the rub: these shows are inspiring an entire generation to make bad travel decisions.

Huh? How’d we make that leap? Without prejudice to the inane assumption that there is some objective and universal list of good travel decisions, where are the examples of this growing epidemic among young travelers because I have to admit it’s certainly news to me?

These shows represent a narrow slice of niche travel programming. I happen to like Bizarre Foods and Survivorman among others, and I can assure you such programming will not detract from my travels. I’ve personally written reviews deriding shows like 1,000 Places to See Before You Die as hollow, overly polished drivel. As have others.

Just because I’ve played Grand Theft Auto and seen a Ludacris video once or twice doesn’t mean I need to pimp slap a ho or bus’ a cop on the way to Target. Likewise, I can’t say that Tony Bourdain’s eating bugs and durian in Vietnam is the driving force behind my want to visit Asia. Nor has Les Stroud‘s scraping by on his wilderness survival techniques for a week in the Arctic Circle inspired me to visit Northern Canada. Believe it or not, not all young people are blindly influenced by the “stupid things” we see on The Television. Clearly, today’s young travelers are far more sophisticated than you understand and give them credit for.

As someone who spends a great deal of time writing this travel blog and reading scores of reviews, industry websites, and other travel blogs, I can tell you that these shows are most certainly not the impetus behind many a young person’s desire to travel. Not the folks with whom I correspond on a daily basis.

Go read Hedgehogs Without Borders, Brave New Traveler, The Daily Transit, et. al. Or any of the blogs in my blogroll for that matter – blogs which I guarantee are quite representative of today’s sophisticated traveling youth. Then come back and tell me how travel television is rotting our brains and forcing us to make “bad” travel decisions. These blogs are smart, witty, and cleverly written by passionate young travelers who couldn’t give two hoots about what Andrew Zimmern is eating, let alone allow their travels to be dictated by same.

And that’s why we travel. To learn. To make new connections. To gain new experiences and to grow as individuals

You’ll forgive me, Mr. McNeely, but what gives you the right to force your self-righteous reasons for travel down the throats of us “young people”? I’ll be the judge of why I travel, thank you very much. Frankly, all this hemming and hawing about how today’s youth “should’ve traveled back ___ years ago when you were traveling – back when travel was real and fulfilling” sounds eerily like some mutant strain of Kathmandu Syndrome to me.

Sure, times change. People change. But to imagine some objective and historically precise Golden Age of Travel to which we’ll never return – the devolution of which we can surely blame on television – is not only philosophically lazy, but just wrong.

At the end of the day, travel television is just that: television. So relax.