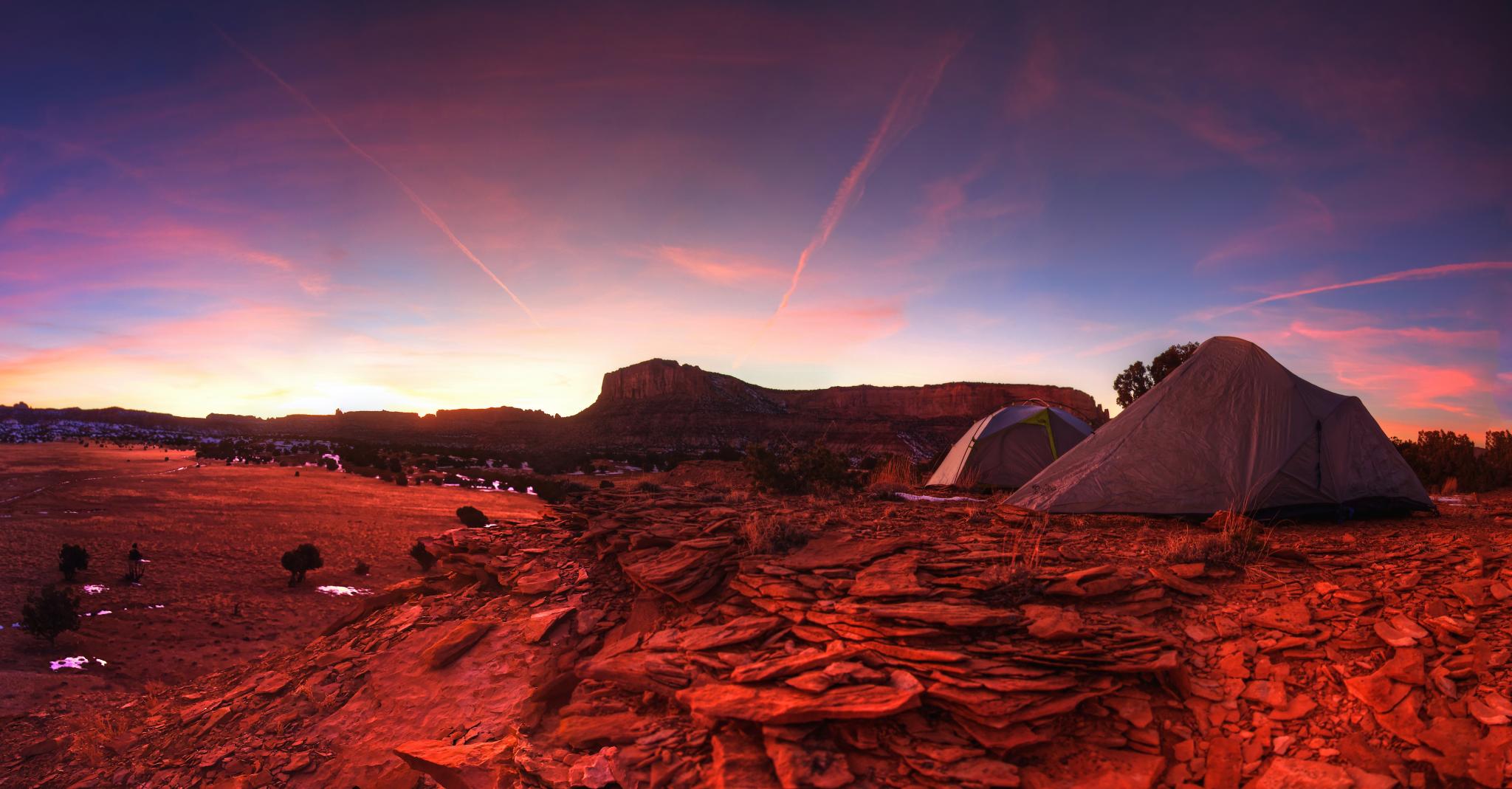 Some people will flat out say that they will not camp while on vacation, but I’d urge everybody to reconsider. While I don’t need five star accommodations to be happy, I do rather like a comfy bed and a secure room. That’s not to say that I haven’t enjoyed a few camping trips over the years.

Mixing up your style of travel can provide a whole new perspective on your destination and camping can be a fantastic way to deal with a small budget.

If you’re intrigued by camping but don’t want to make too many compromises, here are my tips on planning a camping trip without too many muddy puddles and irritating insects.

Have A Good Reason To Go Camping

If you’re not inclined to be the camping type, you probably need to give yourself a good reason to try it. Obviously a common reason to pack a tent instead of staying in ho(s)tels is cost — the fees for pitching your tent in a campsite are often considerably lower.

It might also be a convenient way to travel for your particular trip — perhaps you are going to travel by car, and you’re happy to sleep in a tent on the outskirts of town rather than trying to find a parking place close to a central hotel.

It’s also a fun way to travel with a group of friends, especially if you can spend evenings sitting around a campfire! 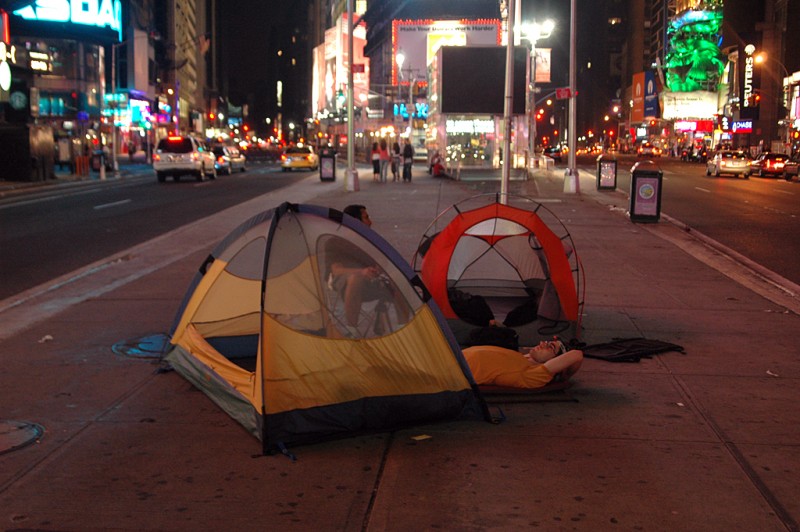 Obviously, camping when the temperatures are close to freezing will require special equipment, so strike that off your list immediately; camping when it’s really, really hot can be pretty uncomfortable too. And getting from the tent to the bathroom in the rainy season is also less than desirable. In other words, check the weather in your destination and go camping when the it’s likely to be fairly cooperative.

Having said that, one of my fondest camping memories is lying in my tent in Croatia during summer hearing and seeing the rain fall on the roof of the tent. So don’t get too concerned if the weather doesn’t go exactly as planned.

These days, outdoor and adventure stores are abundant and feature so many “must-have” gadgets that it’s easy to spend way more than your budget preparing for your camping trip.

But if you’re camping in reasonable weather you don’t need much more than a decent tent and a comfortable enough air mattress or camping roll of some sort.

One summer in Germany I even went camping with the sheets and quilt off my regular bed. This was instead of buying a sleeping bag that I would have had to lug around unnecessarily for the rest of my trip!

One of the easiest ways to make camping complicated is to decide you want to cook food like you would at home. I’ve seen campers with deluxe camp stoves and all the related paraphernalia. Even if they’re traveling by car, it all takes up a lot of space and I suspect a many them (hard-core campers aside) rarely use it.

My theory is that if I’m already saving plenty of cash on accommodation, I can afford to eat out a bit more often (who says you can’t eat in a restaurant just because you’re sleeping in a tent?) and the rest of the time, make simple meals like sandwiches or salads.

Talk to Other Campers

One of the nicest parts of camping for me is that you can meet a lot of interesting people at a campsite. It’s great to use some of the communal facilities that campsites offer (for example, a TV room) although I often get chatting to people while I’m simply cleaning my teeth!

Above all, if you ever find you need some slightly fancier camping equipment (I remember at a rock-hard camping ground suddenly needing a better hammer for our pegs), don’t be afraid to ask people in nearby tents. Oftentimes, they’re likely to help out and even offer some handy travel tips at the same time. 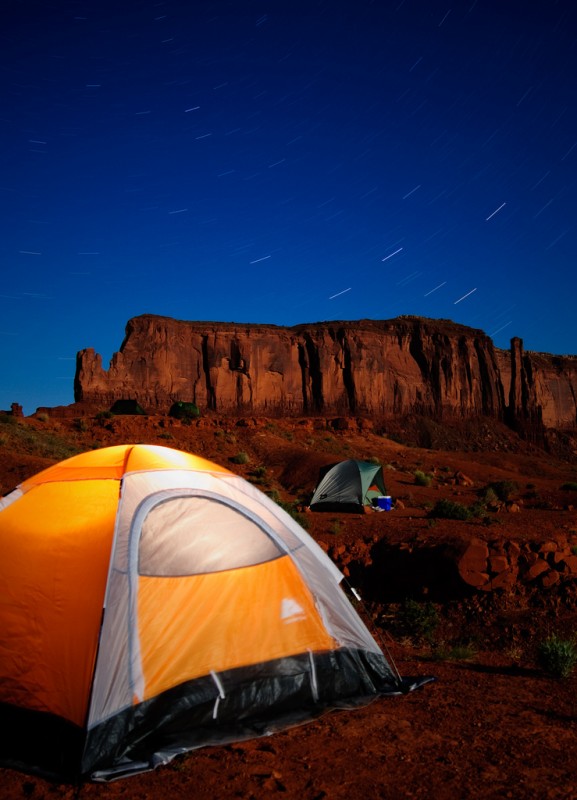 Under the Stars in Monument Valley, Utah © Bhanu Tadinada

Make Sure You Can Sleep Comfortably

The number one complaint “non-campers” make about actually going camping is that they can’t get a good night’s sleep. This can be a problem, but it’s usually one that can be solved!

It is all about finding a decent air mattress or a roll-up mattress that suits you, and it’s worth making sure you’ve got something comfortable. My personal preference is an air mattress. I have to say that the one I used when camping through the Balkan states a few years ago — despite costing less than a hundred euros — was one of the most comfortable beds I’ve ever slept in!

If you’re able to borrow something from friends, try them out at home first to determine if you’re going to be comfortable or not.

Often on trips that involve camping I’ve only spent perhaps three-quarters of the nights sleeping in tents. Sometimes, a cute hostel turns up that I’d love to stay in, or after a long drive, I really don’t feel like putting up the tent before I can sleep. Just because you are camping during your trip, that doesn’t mean you can’t occasionally stay in a hotel or hostel!

Alternatively, you might be the kind of traveler who wishes they could stay in a five-star hotel but could never afford it usually. If so, you could always save heaps of money by camping for a week or two and then spend the money you’ve saved for a couple of nights in a fancy hotel. You’ll appreciate it more than ever!

So, I urge you — even the complete non-camping types among you — to consider doing at least part of your travels in a tent. There’s nothing quite like sleeping out on a green meadow to make you really feel like you’re far away from home!