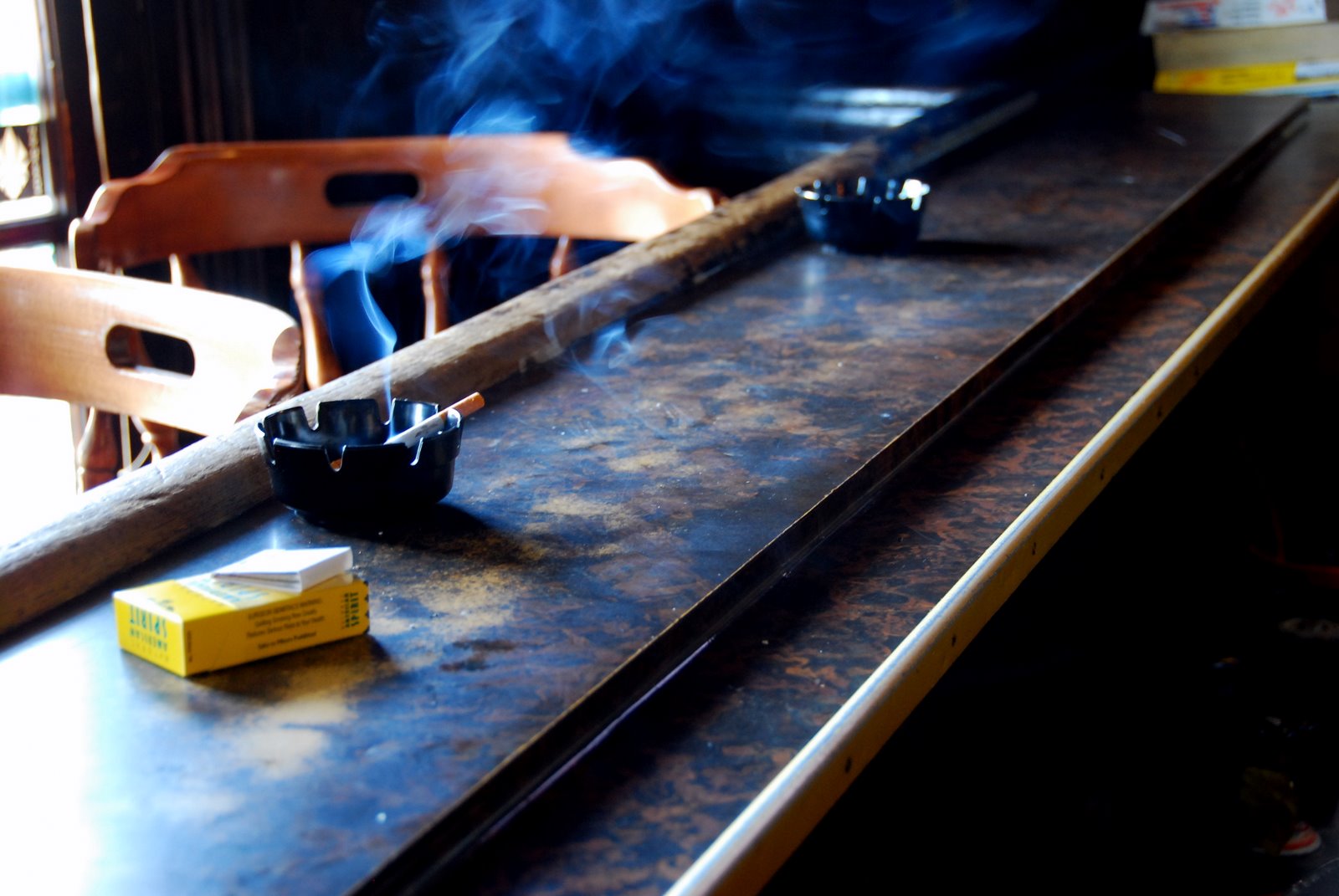 I arrived in Austin feeling like an angry bear with a NyQuil hangover and a 20-pound Cheeto on his back. The air was all wrong, too thick; this I knew even as an outsider. It was Hurricane Ike, stomping toward Houston, pushing gulf air west to Austin. And Hurricane Ike, though it faded before reaching us in central Texas, ended up thoroughly pissing on our parade.

We learned the following day, via a call from an Amtrak employee, that all trains running through the South were canceled indefinitely. And while the idea of an involuntarily extended stay in Austin was a good one, Kamran needed to be in North Carolina to catch a Pakistan-bound plane in a week.

We conferred. My first thought, hitchhiking, was unreliable on a timetable like ours. Buses, like trains, were stricken by the storm. Rental cars were booked solid. Flying was, as always, too expensive. Then, I thought about moving to New Orleans.

Moving truck rental joints only care that your rented truck gets from Point A to Point B undamaged and with a full tank of gas. Theoretically, of course factoring in gas, we could rent a small moving truck, put our packs in the back, and jam through the South cheaper than boarding a plane. In addition, to what degree of seriousness I’m not sure, Kamran reasoned we pick up some meth or illegal immigrants and do some modern Southern moonshining. Forty hours later, we sat ourselves in the cab of an almost entirely empty monstrosity, headed south. 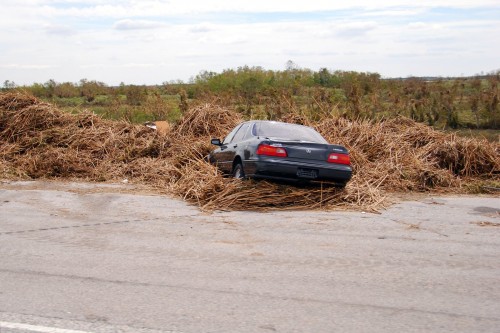 We’d been listening to radio reports about fuel shortages around Houston in the aftermath of Hurricane Ike. Naively, we stopped at a gas station looking for spare gas cans in the event we couldn’t make it through East Texas on one tank of gas. This happened to be the same idea that any number of the several million people in the Houston area had as they evacuated their town. We were forced to try our luck sans additional fuel, hoping a steady 70 miles-per-hour would be efficient enough to carry us to New Orleans.

The exodus of refugees had emptied the freeways almost entirely, leaving scattered locals, processions of emergency vehicles pouring in from Louisiana, and one Budget truck with a Californian and a North Carolinian who appeared to have chosen a terrible weekend to move. We could only roll through and observe with empty cubic yards of storage over our rear wheels. Like the Romanians say, we were as useless as a shoe full of spiders.

As you would expect a brutal force of nature to do, Hurricane Ike tenderized Houston with big, vulgar fingers. He blew out windows and ripped up billboards. He flooded and he crushed. Like an idiot kid peeing on an anthill, Ike giggled as the people of Houston scurried angrily, regrouped, and, days later, returned to begin the patchwork. Luckily — and this shouldn’t have to surprise us – this time the government stepped up to help. 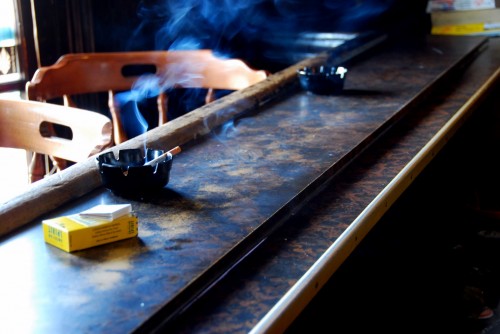 It was dusk when we reached the city of Gretna just outside of New Orleans. We arranged with our host, a young woman named Wendy, to pick us up at the truck drop-off.

Wendy was around five-foot nothing, petit, and blonde. Wendy lived alone and was accepting two strange men into her house. But, Wendy told us, she never worries, since she owns a python of some sort and sleeps with a gun. I go mad for a woman who can turn me into prey.

But in New Orleans I would fall for another. The morning after our arrival we stopped into a pub and were platonically seduced by a 50-year-old bartender named Vicky. She had a cat, she explained, that survived alone for six weeks trapped in her Katrina-flooded home. Vicky rebuilt the house, though may never be able to rebuild the cat’s psyche.

She smoked and stared at us as we asked questions about her house and bar and cat. I wanted to take her picture but she wouldn’t let me. She was a rare smoking breed, having the patience to put the cigarette down in the ashtray in one of the divots that no one else seems to ever use these days.

I’d like to marry you, I thought, and you can smoke and tell me stories and bring me beer. Whenever you wanted it, I’d get you a beer too. And I’d stockpile cat food and teach your cat to open cans so it would never nearly starve again. 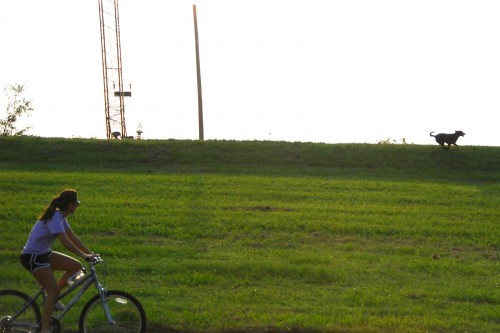 Six in the morning is an inappropriate time to be awake, much less a time to be shuffling forward in an Amtrak security line in New Orleans’ Station Building. Hung over and lacking the energy to carry my big Cheeto, I just dragged it behind me. I missed Vicky.

Two men were checking tickets this morning, one a conductor and one an Amtrak cop. They stood staggered, the cop four or five paces in front, calling “next” to the line of passengers. The cop looked mean and the conductor nice, which may explain why Kamran bypassed the former to approach the latter, even though the conductor was still busy with another passenger. Of course, by conventional police wisdom, Kamran must have had something to hide.

The cop looked at me and jutted a thumb over his head. “You traveling with him?”
“Yeah.”
“Alright.” He pointed a few feet to his left. “You mind stepping over here please?”
“OK.”

He turned and grabbed Kamran, who was unaware of his mistake. The cop was relishing our mild, though apparent, distress. This is what he got out of bed for today.

“You mind if I take a look in your bags?” He fixed his posture, trying to reach my height.

I could have made a stink about his request, such an option being well within my rights. But I looked out the windows at the train and thought about our timetable. I considered anything in my bag I may not want to be discovered. I looked at Kamran, who appeared ambivalent, or exhausted.

The cop hid it well, but I knew he was nearing arousal at the thought of making arrests today. It would be a grand opportunity to justify his job.

He unzipped pockets, opened pill bottles, smelled shampoo, but found nothing of interest other than a half-drained flask of whiskey, which he either didn’t recognize as such or simply lacked the gumption to do paperwork today. Satisfied with his snooping, he waved us on.

“Kamran,” I said as we hurried down the platform, “this is the South, and you are brown. Please behave accordingly around law enforcement.” He just silently shook his head.

She was waiting for us, idling impatiently.

I lugged my Cheeto aboard. “I don’t want to hear it.”