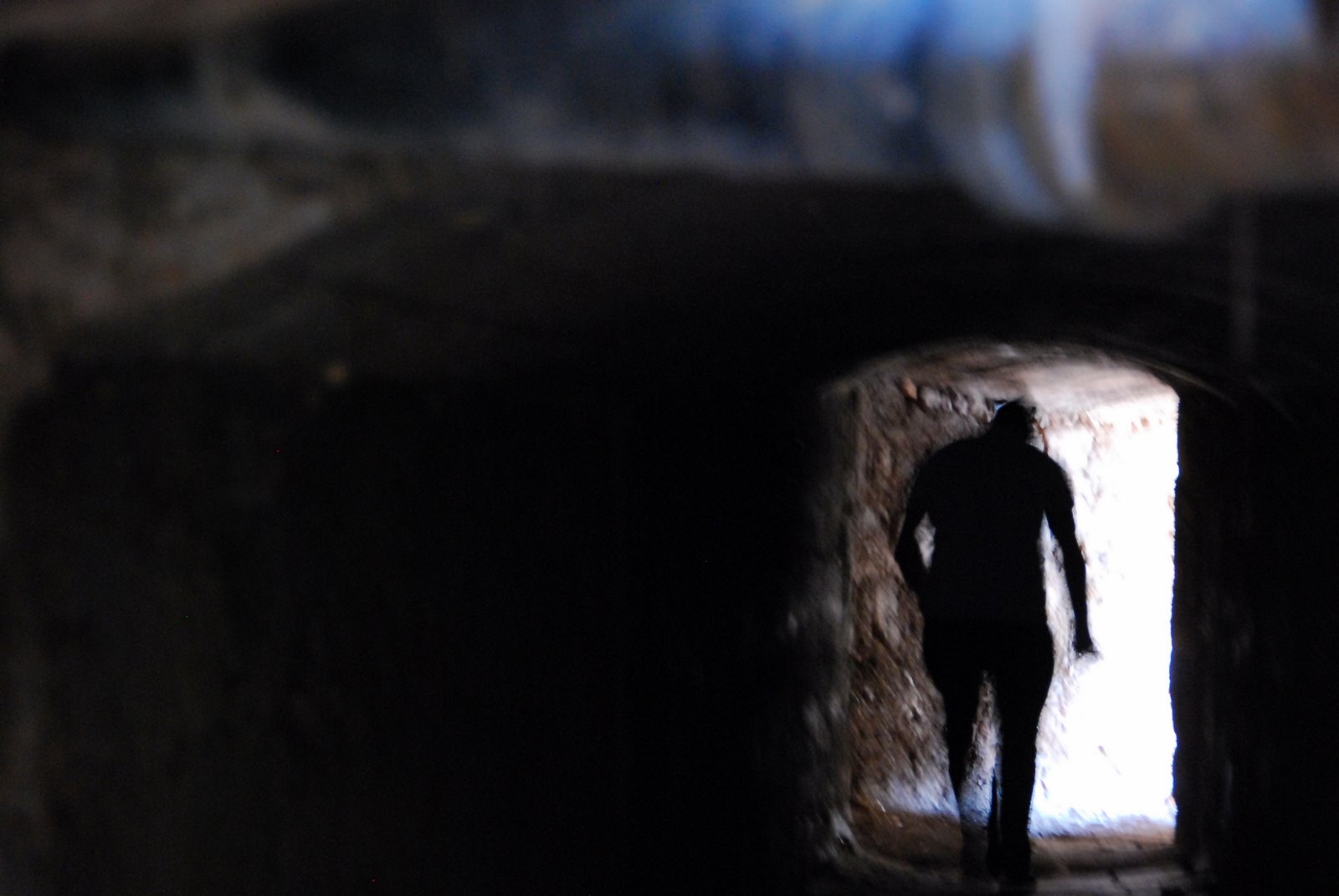 We disembarked Amtrak shortly after midnight into the still-smoldering Tucson air, tired, misanthropic, and in my case, many whiskeys deep. I phoned our host, Becky, to let her know we’d arrived, though she was already in the station. Playing the is that you, the one on the phone game, we located each other. And for a stranger willing to let strangers sleep on her couch, she looked entirely normal. Almost too normal. But Kamran and I had no other choice, and our reservations weren’t strong enough. We threw our packs in her aging four-banger Toyota 4-Runner and broke one of my mother’s central rules regarding strangers: don’t get into their cars.

But sometimes, like in this case, the stranger is a very pleasant, very attractive young woman, with curly strawberry-blonde hair and with what your grandmother might call “kind eyes.” She shared an adobe-coated bungalow with her boyfriend, another roommate, two kittens, and from time to time, vagrants like us.

“So,” she said once we were in her living room, “here’s the couch. We only have one, so one of you needs to take the floor.” I had a bedroll, I explained, so it was no problem. “Here’s a key,” she continued with a big smile, “and if you need it, you can take the 4-Runner around. I use my scooter most of the time. You need anything before I hit the hay?”

Stunned (Jesus, we can take her car?) and still apprehensive, Kamran and I nodded dumbly, said goodnight, and lost consciousness in the home of a stranger we met on the Internet. 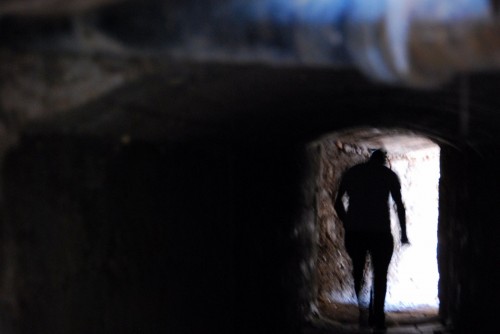 Walk Through Irrigation Tunnel in Bisbee, Arizona © Matt B. Simon

Couchsurfing is much like a one-night stand, just with fewer sexual diseases. Once the booze wears off, you’re not sure how to act: to run, to play nice and ask to go on an actual date sometime, or to simply sleep until you’re thrown out. But with couchsurfing, all three are always acceptable options.

I awoke at 8 a.m. with kittens eating my toes. Becky’s boyfriend, Sean, was in the kitchen swearing at the espresso machine. Kamran was up, watching for my reaction. I was too confused to react.

I didn’t want to be rude, so I accepted, even given my extreme sensitivity to caffeine. (I once nearly frenzied myself into unconsciousness after drinking a Frappuccino.) Not only would I not be going back to sleep after the rest of the household went to work, I’d be having visions all day.

The permanent residents of the bungalow began making their way out, leaving Kamran and I to our own devices for the day. Becky ended up needing her truck to transport art supplies, so she dropped us off at a car rental, where we picked up a fire truck-red, bare-bones, American-made sedan of some sort. With this car, we spent the next two days burning around the desert, terrifying the wildlife, and returning at night to the bungalow for home-cooked meals and wine.

The formula was simple and maniacally enjoyable, but on the horizon our departure loomed: a 30-hour epic train ride from Tucson to Austin, Texas. Kamran and I got along just fine, in fact we were once roommates for a year and never physically harmed one another, but this sort of journey could test the limits of any human relationship. Everyone was nervous when Becky dropped us at the train station to fend for ourselves. 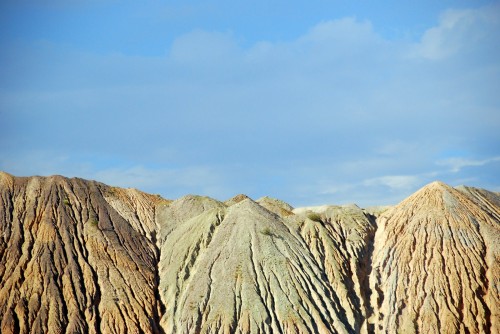 We waited, and soon our mistress arrived, snorting and trumpeting and kicking.

Alone and apprehensive boarding a blacked-out train packed to the ceiling with sleeping passengers, we found seats and marked our territory. I drank half a bottle of NyQuil in a desperate attempt to numb my nervous system. Kamran just nodded off with a smug calmness.

As it happens, NyQuil lost its effectiveness on my system as our trip went on, so I switched to Benadryl and whiskey. My aunt tried explaining to me that mixing cold and allergy medicines with alcohol has killed people before. I explained to her that I loved her, but until she takes a 30-hour train ride, there will be no toxicology lessons. 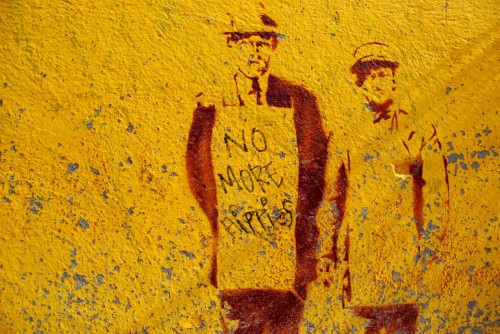 The train was stopped when I awoke. It was still dark out, and we seemed to be in a trainyard. Kamran was awake and perfectly calm. “San Antonio. They leave us here and another train picks us up in the morning.”

Such an overnight stay, sequestered in tin cans with a hundred other passengers, is a manifestation of an American train system gone nonsensical. In the first half of the 20th century, our rails were enviable, as trains throttled around the country, often clocking speeds well over 100 miles-per-hour along considerable stretches. But then our magus-like leaders chose planes and cars and locked us into an absurd infrastructure of stagnation.

On an Amtrak train, you can see plainly what the automobile has wrought. You’ll come across American towns that grew with the railroads, that served as pivotal junctions, that suckled on its quick deliveries of mail and freight. And right off the rails you’ll see the budding strip malls (Best Buy, Target, Home Depot, and their ilk), the nasty tumors of the car cancer born in the post-war boom. There’s no more growth here. The rails are damn near dead. There’s only consumerist quiescence.

This infrastructural illogic, like with so many other issues in the public sphere, reached a pinnacle of inanity under President George W. Bush, who proposed cutting federal funding of Amtrak, which would have effectively killed it. He would later reverse and appropriate the necessary money, but his original threat was a terrifying one. Our projected population growth could never be supported by the highway system alone, as the sardined Los Angeles area has already demonstrated. Infrastructural salvation will only come on rails.

Befuddled and frustrated in a railyard in San Antonio, all I could do was drink the other half of the NyQuil and hope for a coma.