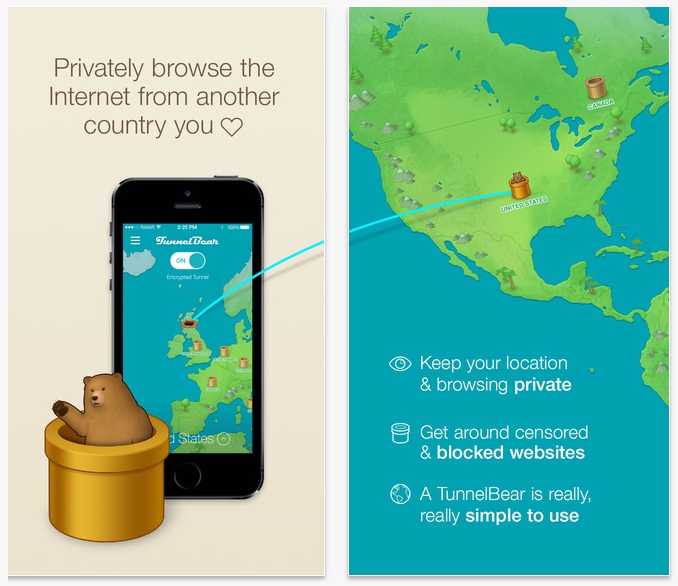 If you’re an avid traveler who’s still not using a VPN, you definitely should be. It’s a no-brainer for a variety of reasons, including: anonymity, truly private browsing, bypassing internet censorship in countries like China, malware protection and more. Plus, there’s even evidence to suggest that booking travel through a VPN could help you save big on airfare.

Now, assuming that you’re (wisely) on board with using a VPN, the next logical question is: which software should I use? We’ve tested a variety of apps and they’re not all created equal. The biggest issue that we’ve found is speed – a bad VPN can be incredibly slow.

So … hoping to find one solution to end them all, I took to testing out the latest TunnelBear VPN mobile app for iOS.

My favorite Modern Vagabond posts to write are those for products that just work. They do exactly what you expect of them without a lot of cursing, foot stomping, rebooting of computers, and headaches.

Download and installation of TunnelBear took less than two minutes on my iPhone 5 (running iOS 8.0). This includes opening the app and installing the VPN profiles which was easy enough that my Nana could do it.

After that, it’s a matter of launching the app and selecting the country that you want to “tunnel” from. I selected Canada, waited 15 seconds (typical for VPN software) for the connection to finalize and … voila! … all my web traffic was anonymously routed through Canada. After this, for all intents and purposes, my digital persona was Canadian.

A dozen other countries are available if you like, including France, UK, United States, Japan, and others. As a bonus, there’s even a fun map interface plotted with Super Mario Bros-esque tunnels to send your bear through (perfect for people like me who love cartoons and flashy things). Just tap the tunnel in the country you want to reroute to and your tunnel bear will take you there.

To disconnect from the VPN network, simply launch the app and click the “On/Off” toggle switch. That’s it. On … Off. It’s Nana-proof.

Not surprisingly, TunnelBear’s software has received accolades from some of the biggest names online, including: Lifehacker, PC World, TNW, Huffington Post and WSJ.com.

Available for download now for Android (ICS and later) and iOS (5.1 and later).

Along with the free software app, you’ll need to select a package too. There are three to choose from: