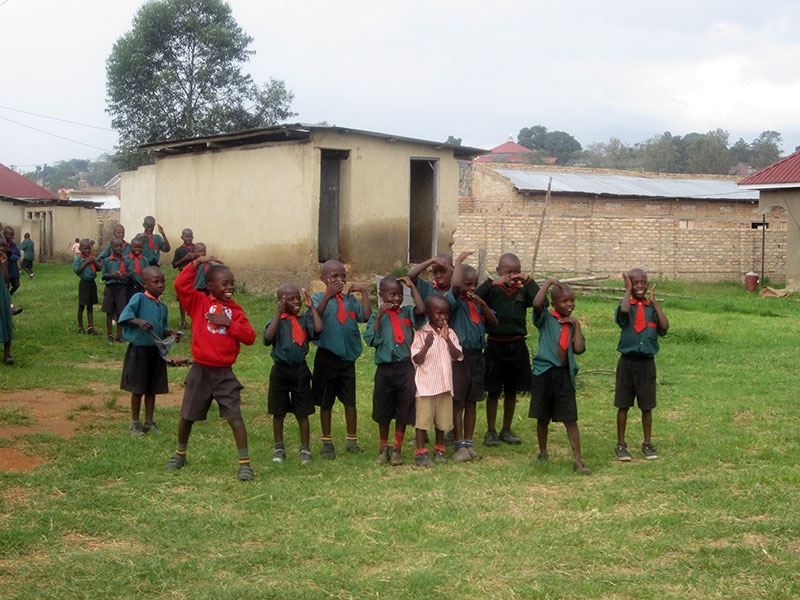 Journey to Africa: How 1,000 Ugandan Children Changed My Life

“I really don’t know what to expect. It’s the deep heart of Africa. I have nothing to compare it to. But … maybe that’s the beauty of it.”

These are the words I enshrined in my journal in November on the eve of my long, boomerang-shaped chain of flights from Los Angeles to the East African nation of Uganda.

“Uganda? Why would anyone go there?” I was asked repeatedly by those closest to me, more times than I cared to answer, despite my eagerness to go.

For the past six years, I have been involved with an endearing charity called Sylvia’s Children. Founded 10 years ago by my dear friend Sylvia Allen, it was created as a way to improve the living conditions for over 1,000 children, one third of whom have been orphaned due to HIV/AIDS, in the small village of Mbiriizi.

Its ultimate goal is to create a self-sustainable economy for its primary school, which could then be shared with surrounding schools in sub-Saharan Africa. In this time, Sylvia has worked tirelessly to raise enough money to construct a clean well, housing, a library, a sewing building, a chicken coop, a corn milling building, and much, much more. And she is in the process of constructing an enormous medical clinic, which will serve not only the children, but the village itself. She has even enlisted the help of doctors and nurses, who have saved lives.

Each year, she organizes three volunteer trips to Uganda, and every year I flirted with the idea of going, but finances or anxiety got in the way. Last year, I finally got the chance, and the courage, to join her on the Christmas trip. Held every year in November, this particular trip is the more uplifting of the three. It’s the “Christmas trip,” where Sylvia throws a party for the children and gives them gifts.

There was no better and more appropriate way to mark the close of an eventful year, which took me to Asia, The Middle East, and throughout Europe and Scandinavia with another client on a top world concert tour, than to travel to one of the most remote lands on the planet. Before I left, so many people pleaded with me to not go. They lobbed all sorts of dire warnings at me – of a recent Ebola outbreak in the nation’s capital of Kampala (which was quickly contained to a small number of people); of violence from militant sects (which is only in Northern Uganda and the neighboring Democratic Republic of the Congo); its horrific record against gay and lesbian people (not to be disputed); or just general fears of rare and scary African diseases — you know, the ones you see in summer blockbuster movies or on Dateline NBC.

Don’t get me wrong: I let some of these fears get to me, and did have second thoughts for a hot minute. Then I realized that every other time I was told not to do something, that something inevitably changed my life.

So, off we went. After a connection in Amsterdam’s ultra-modern Schiphol Airport, we boarded a very different flight to Entebbe, Uganda — the same airport that housed Israel’s hostage-rescue mission of a hijacked Air France jet in 1976.

This jet was packed mostly with fellow Westerners, most of them with their noses planted firmly inside the cheeks of their bibles. The five of us — which consisted of myself; Sylvia; her son Tony; a friend of mine, Ken; and another Sylvia — were pretty much the only ones who did not.

After a brief stopover in Rwanda, we landed in Entebbe at night. What struck me was the fact that, for the first time in my traveling life, because of the lack of terrestrial lights, I could not tell when we were about to land on the runway until the bump and squeak itself happened.

Once we deplaned, my nose was greeted by an “interesting” scent – what I learned was the “scent of Africa”. It smelled of spices, fire and clay – not unpleasant but did require some getting used to.

The next thing that immediately struck me was the fact that, with zero light pollution, one could see every twinkling star in the night sky. It was serene and breathtaking. “I am in Africa,” I remember saying aloud, however inane and obvious as it was, but yet still in amazement. It had always seemed like such a completely foreign place to me, maybe one notch below Antarctica or the North Pole. 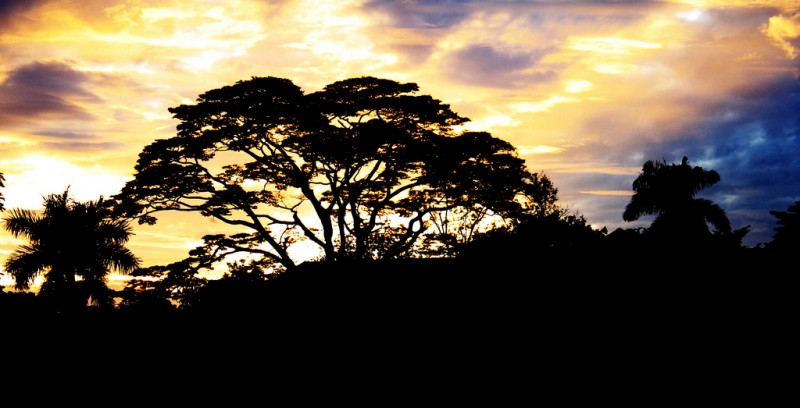 The next day, after a light sleep and breakfast at the local inn, we made our way west, around Lake Victoria, to the village of Mbiriizi, in the Masaka district. We even stopped at the Equator and sampled one of Uganda’s popular street foods, Chapati chips and fresh guacamole.

It surely was, as they say, an assault on the senses. But I was glad to experience it, in all of its brutal honesty.

The four-hour drive was a Morse Code of long, protracted lines of rolling, green tropical landscape dotted with banana plants, and small blips of villages. Each one looked identical to the next, made only unique by the different sequence of painted advertisements on the front of its stores. I was told that large companies — many of which are mobile carriers or brands like Cadbury or Coca-Cola — do this as a barter deal with villagers. In exchange for the cost of painting their building, the brand receives infinite outdoor exposure.

I witnessed a small monkey climbing a tree; cows and goats chained on the side of the road; large, obnoxiously loud garbage-carrying storks; and small lizards. I experienced my first culture shock on the trip when I saw an infant girl urinating outside her home; butcher shops, which were no more than rows of animal carcasses hanging in small shacks; street vendors selling fried grasshoppers; and burning garbage in front of homes. It surely was, as they say, an assault on the senses. But I was glad to experience it, in all of its brutal honesty.

The next day was the day we had been waiting for: our first visit to the school.

How can one put into delicate words the beautiful simplicity of pulling up and being greeted by 1,000 cheering children, jumping up and down, waving, and serenading you?

In fact, this became a hallmark of our next few days at the school: a constant celebration of spirit, of life, and of appreciation. It didn’t matter who you were, your background, or your material possessions – it only mattered that you were there. The genuineness of the Ugandan people I found to be pure, soulful, and unconditional.

On one occasion, after being welcomed into the local church, I met an elderly woman from the village, with a red dress and a walking stick. She spoke to me in Lugandan and told me that I was the first white person she had ever met. After I picked my jaw off the ground, we both embraced.

Settling In + Giving Back

For the next few days, we were regularly presented with song and dance, and enjoyed delicious homemade meals of local quality foods, from tilapia to stews, prepared by a special, always jovial lady named Betty.

The children were the real treat though, as they ran to us at every chance they got, grabbing at and holding onto our hands, our arms, or our legs, sometimes many at once, waiting to check out their newest pose in an iPhone photo, or running their fingers over our arms to feel our “different” skin. They were all so well-behaved and so happy!

On one occasion, which brought many laughs, a few children and I played a game of “Copycat.” I would do a sequence of moves, and they would copy it. On the third one, I decided just for the hell of it to do Madonna’s signature “Vogue” move as a joke. They made a decent effort, swinging their hands in all different directions around their face. Hours later, when we were getting ready to leave for the day, I was met by two separate boys, perfectly vogueing from across the schoolyard. I nearly died.

But the most cherished moments of the trip were when we were able to give back to them. On one occasion, we presented every boy and girl with their own Christmas gift bag, which included all sorts of goodies from candy to little toys like bouncing balls and finger puppets, to brightly colored sunglasses and Mardi Gras necklaces. All were donated to the charity by local businesses and friends of Sylvia.

We also gave every boy a new shirt and every girl a new dress. The real joy was seeing over 1,000 children parading around and showing off their beautiful new outfits to each other.

On another day, we all worked as a team to serve every child a hot lunch of either beef or groundnut sauce over rice and beans. It took a little while, but was well worth it to see the smile on every child’s face. 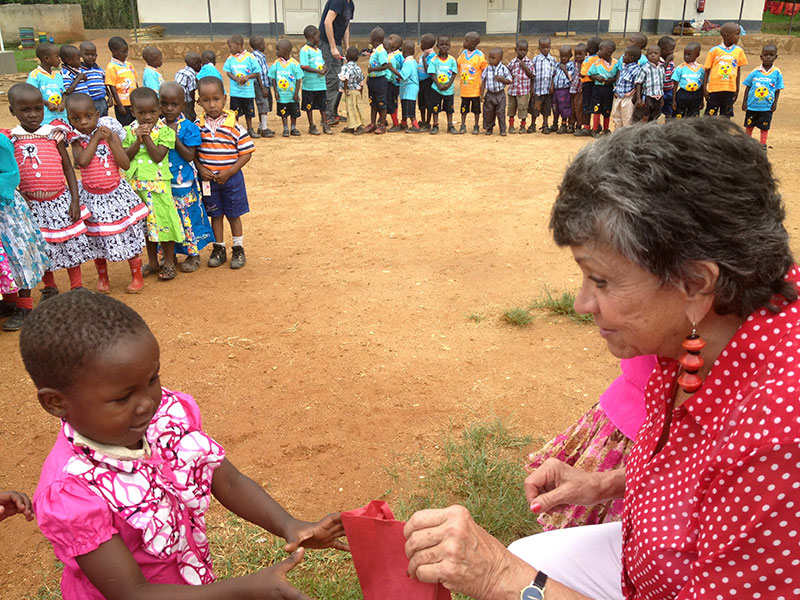 The last day was Graduation Day when Top Class (similar to American Kindergarten), moved to P-1. They all donned graduation uniforms and their parents came from around the village to witness their special day, decked out in the most beautiful of African garbs and dashing suits, while Sylvia presented each child with a diploma and a photo.

Sylvia stated to all of the parents, “Your child’s education is so important, because it’s the one thing that can never be taken away from them.”

At the end of this ceremony, the children once again presented us with song and dance. One of the original songs sung often had lyrics about the children simply appreciating us because of our love for them, not because of what we could bring them. It brought me to tears every time.

They also brought us on stage, and asked us to speak. I thanked everyone for making us feel so at home and for their constant outpouring of love.

Then the school’s headmaster, Geofrey, bestowed me with an honor I will never forget — my own African name, Opio. The literal translation is “the oldest of twins.” I think they were referring to me being the older brother to them.

Despite the fact that it was dry and sunny that day, upon leaving the gates of the school and waving one last goodbye to the children, it still rained! 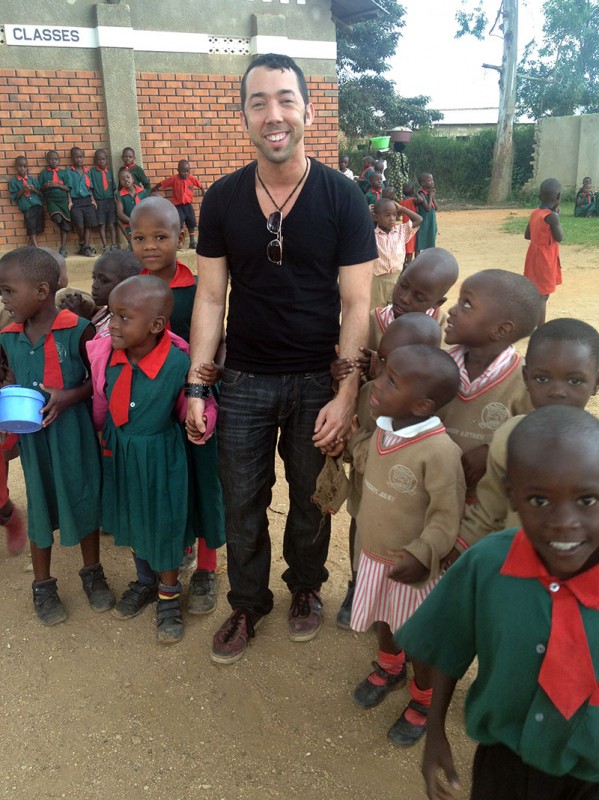 When I finally made it home, after hours of passing through Kenya, Paris, and New York, it finally hit me what was so significant about this experience. It was seeing people who had practically nothing, in terms of the material possessions or basic living amenities we take for granted, who were still so willing to give everything they had.

We were all equal, because of how we treated one another, not by what we had or didn’t have.