I’d never visited San Luis Obispo before. As an ignorant East Coaster, this area between San Francisco and L.A. was a no-man’s land to me — a vast, yet-to-be-explored swath of Pacific Coast highway dotted with nameless small towns, hippie surfer hangouts, and maybe a few vineyards. As it turns out, this is how many native Californians view it as well. Needless to say, I didn’t know what to expect.

But after spending a week exploring the area in and around SLO (as the locals call it), it’s now squarely tied with Mammoth Lakes as my favorite area in California. We kicked off our trip with three days at this year’s Sunset Savor the Central Coast festival (September 25-28, 2014) — central California’s premier food and wine event. And I’m confident we consumed more gourmet food and top shelf wine in a long weekend than most people do in a lifetime. 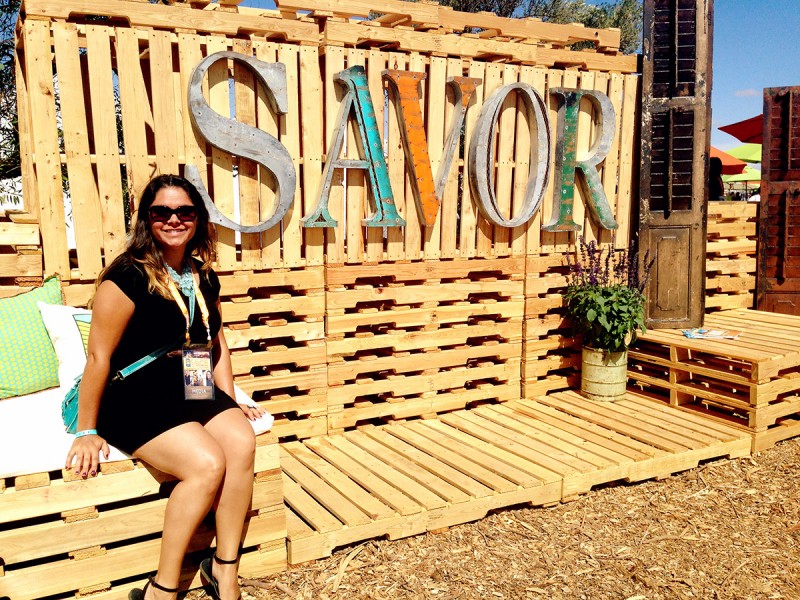 Their pitch is simple:

… all in just three days. We expected great food and wine but were blown away by the actual experience. Which is why Sunset Savor the Central Coast has fast become one of the biggest, most prominent food and wine events in the entire country. 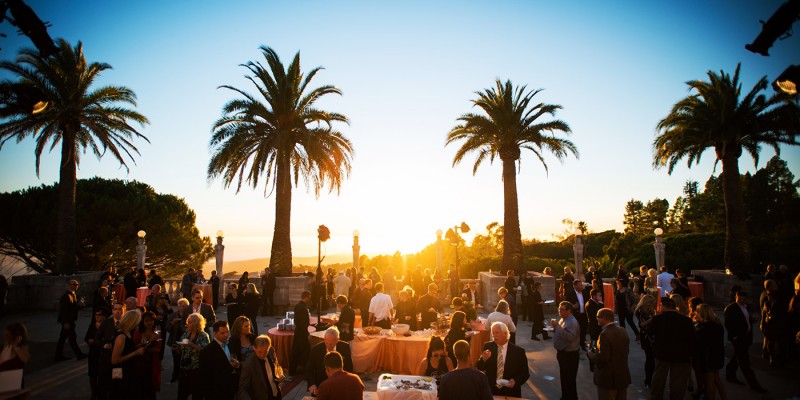 This year, like every year, the event kicked off Thursday night at the world famous Hearst Castle. Built by obscenely wealthy newspaper magnate William Randolph Hearst nearly a century ago, his self-described “summer cottage” is among the most opulent and lavish mansions in the country. It’s a place whose stunning architecture and grandiose scale is quite literally “jaw dropping”. All of which makes it the perfect backdrop to kickoff the annual festival. 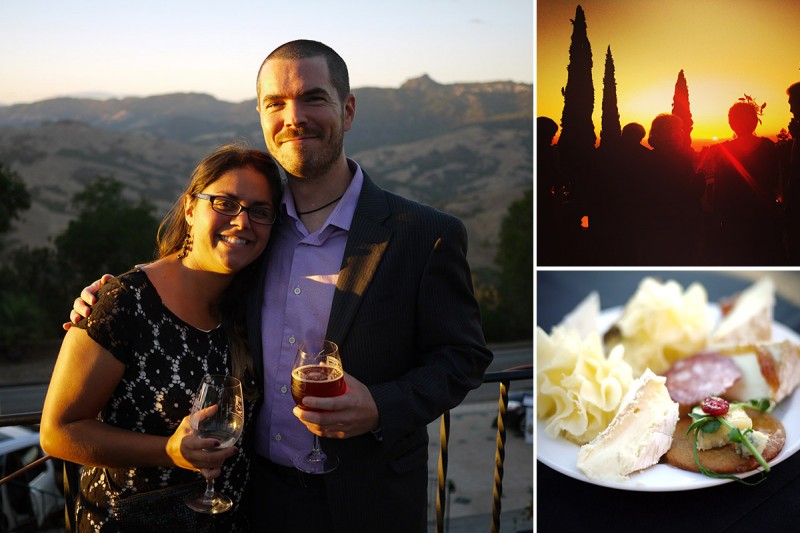 Chauffeured guests arrived by the hundreds, adorned in cocktail party attire and 1930s-era garb, lending a distinct air of flapper chic to the event. This was followed by a four-hour parade of passed appetizers, bottomless wine glasses, local BBQ, seafood buffets, and even a dessert station. To a soundtrack of lively music, we swished our way around the balconies and gardens of Hearst Castle, sampling Coq au Vin, Morro Bay oysters, fresh abalone chowder, and Sunset International Wine Award-winning vino.

Cooking with the Country’s Top Chefs

Every year, the event features special presentations and live cooking demonstrations at Chef Central with some of the country’s top chefs. This year included the likes of Tanya Holland (preparing her famous Creole Shrimp & Grits) and a healthy dose of Italian flavor from Fabio Viviani who, this year, prepared a special duck entree for the audience. 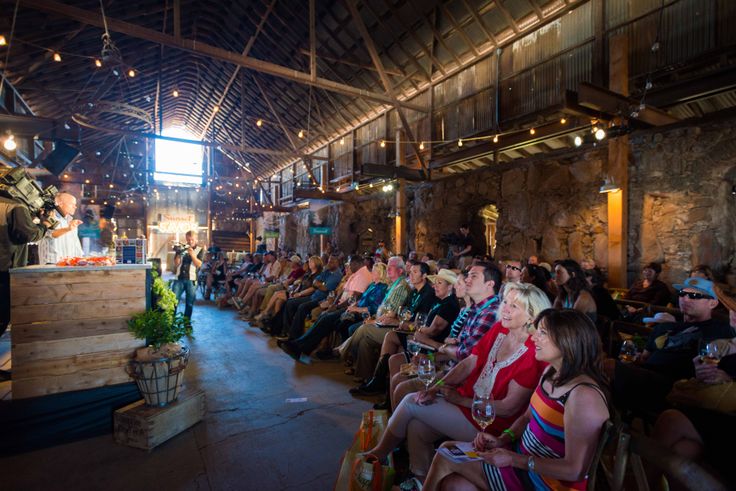 On Sunday, readers of Sunset magazine got to experience a treat as Sunset‘s own Food Editor, Margo True revealed her tips about how fresh, light meals are a staple of living in the West. This year, she prepared a caramelized tomato bruschetta followed by grilled halibut wrapped in lettuce with black-olive tapenade. These are just two of the unusual recipes from Sunset‘s new The Great Outdoors Cookbook.

Sunday culminated at Chef Central with the aptly named “Lamb Jam”. Here chefs prepared creative lamb dishes any way they liked with the goal of winning the People’s Choice or Judge’s Choice awards or, fingers crossed, both. Each chef worked with a local winery to pair a carefully selected vino with their particular dish. This year’s Judge’s Choice winner, and our personal favorite, was Chef Rodney Scruggs of Occidental Grill.

Outside, some of the area’s best restaurants, bakeries, food vendors, breweries, and of course wineries presented us with a sea of gastronomic choices. There were myriad popup tents, live music stages, and fancy exhibit booths with each vendor hard at work to outdo the next. It’s a convivial atmosphere to be sure, but there’s naturally a sense of good-natured rivalry as well. 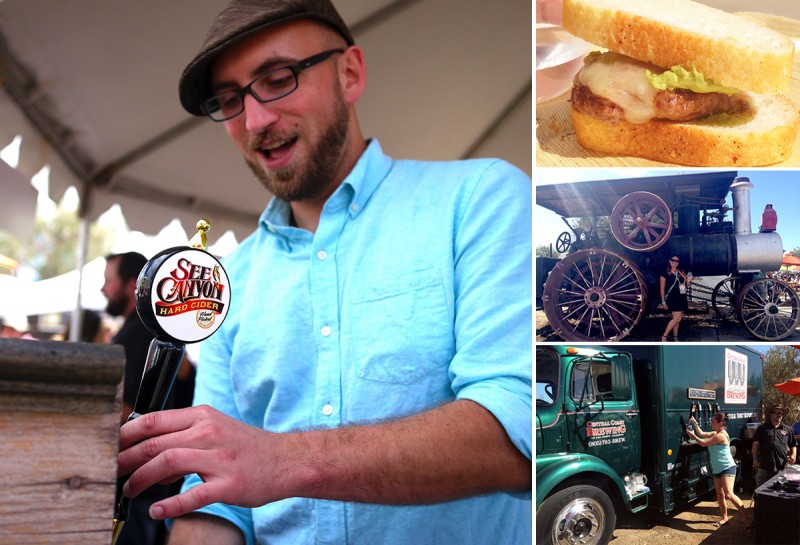 An eclectic mix of live, local bands played throughout the weekend, beckoning visitors to the Estrada (beer) Garden. It was a lively atmosphere for sure, underscored by impromptu acts of song and dance, and plenty of attendees joining in from their picnic blankets and lawn chairs. 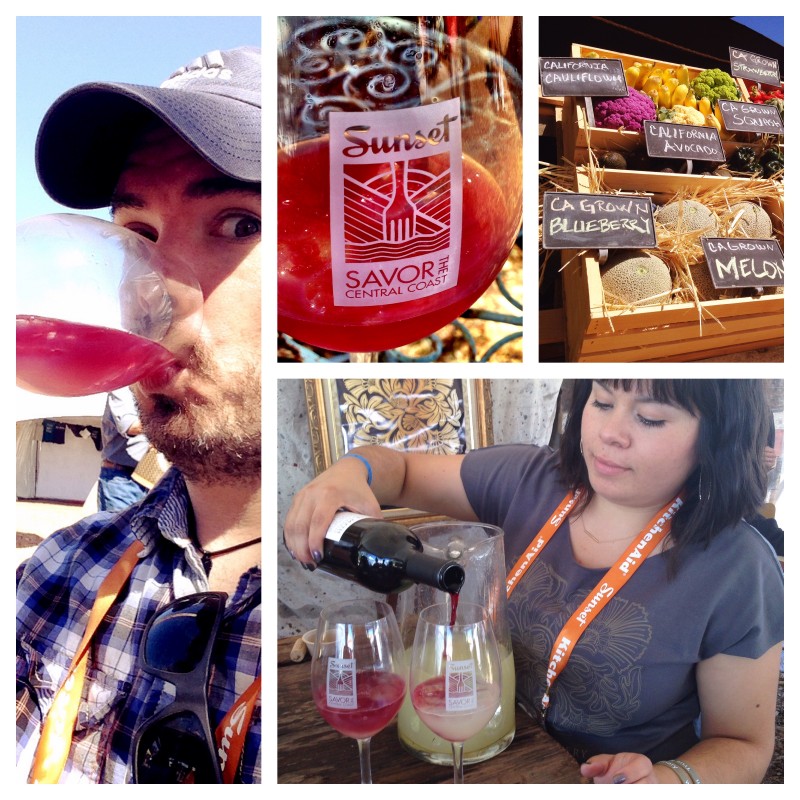 We spent the day sampling countless wines, beer, and food dishes — literally I stopped counting after the first twenty. There was seafood ceviche from Niner Wine Estates made with fresh abalone, claim, avocado; a tent dedicated to all things cheese and decked out in full gypsy garb (more like a Den de Fromage); a seriously tricked-out wine booth from Cupcake Winery; excellent wine from Halter Ranch (which we sampled at least five times throughout the weekend); and even a purpose-built “Tactical Thirst Response Unit” truck from San Luis Obispo’s own Central Coast Brewing with beer taps built directly into the side.

Every day, two kind girls from California’s Eureka restaurants managed to appear at just the right time with a platter of lamb sliders. I felt obligated to pretend that I hadn’t tried them yet just so I could get seconds (and thirds). They assured me that wasn’t necessary. Just. Endless. Gourmet. Food.

In the end, our favorite food of the event wound up being a simply prepared burger on sourdough bread with Monterey Jack cheese and avocado aioli.

Roaming with the Clydesdales (and Other Non-festival Diversions …)

Some would argue that “it’s not just about the food and wine”. We call those folks “silly”. But they’re right in that every year the Savor the Central Coast event also offers a wide variety of ancillary, a la carte adventure tours and experiences that provide visitors with a deeper appreciation of SLO’s rich food and wine scene.

This year, these included everything from indulging in Ocean Rose Abalone on the Cliffs of Cayucos to the Ultimate Wine Experience (including a vineyard hike, cave tour and harvest lunch at Halter Ranch). 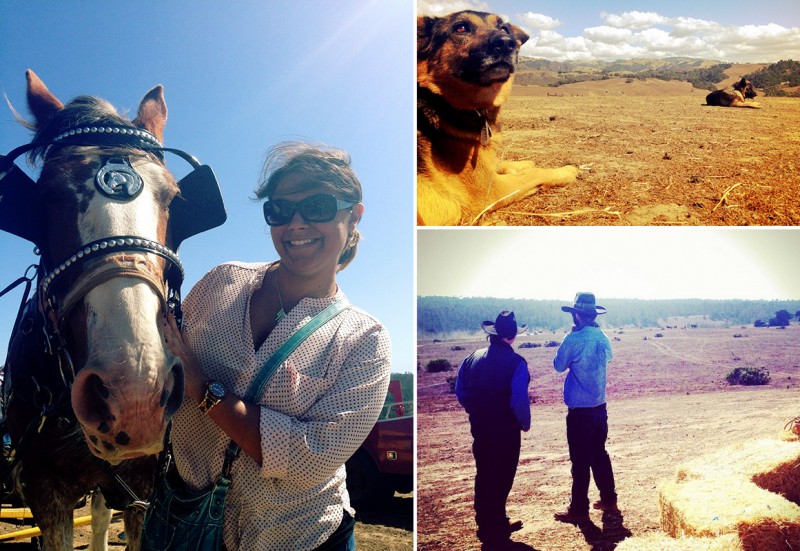 Roaming with the Clydesdales at Covell Ranch in California © Mike Richard

Our favorite tour of the entire weekend was Roaming with the Clydesdales at Covell Ranch in Cambria (so much so that I ranked it among my 7 Essential Outdoor Adventure Experiences in and Around San Luis Obispo). Here, we boarded a purpose-built touring wagon and ranch owner Ralph Covell took us on a guided tour of his prized ranch.

It’s home to nearly 2,000 acres of pure Monterey Pine Forest — the world’s largest, privately owned stand of this endangered tree that’s found in very few places in the world. Ralph purchased the land decades ago and placed it into a conservation easement, forever blocking it from further development. He reveals a deep, personal connection to the land and its future well-being and he works hard to impart that appreciation to his visitors. 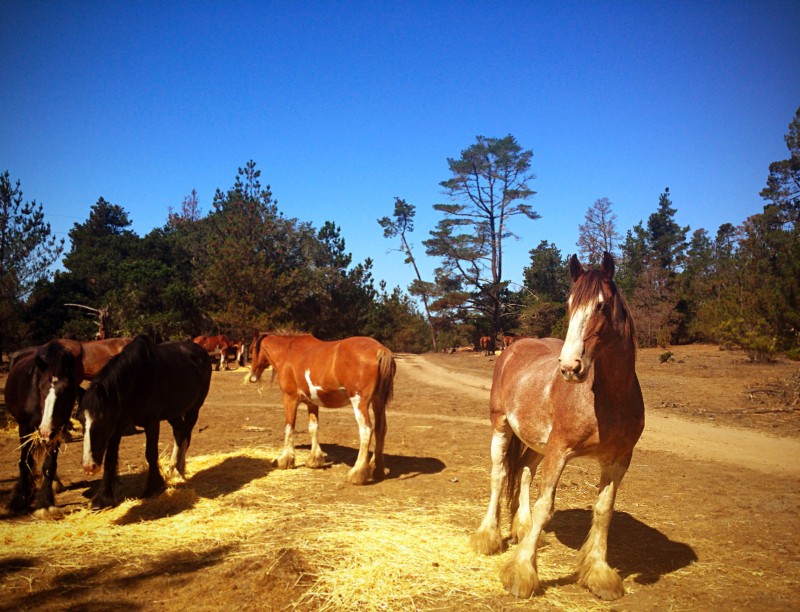 For two hours, we rolled along across endless pastures that seem to slope gracefully into the Pacific Ocean. We also stopped along the way to appreciate his more than 100 beautiful Clydesdale horses. We were fortunate enough to join Ralph and his crew for an exclusive gourmet lunch on a hill overlooking the entire property. It was a stunning view and one that perfectly captured the vast expanse and beauty of the landscape of San Luis Obispo. 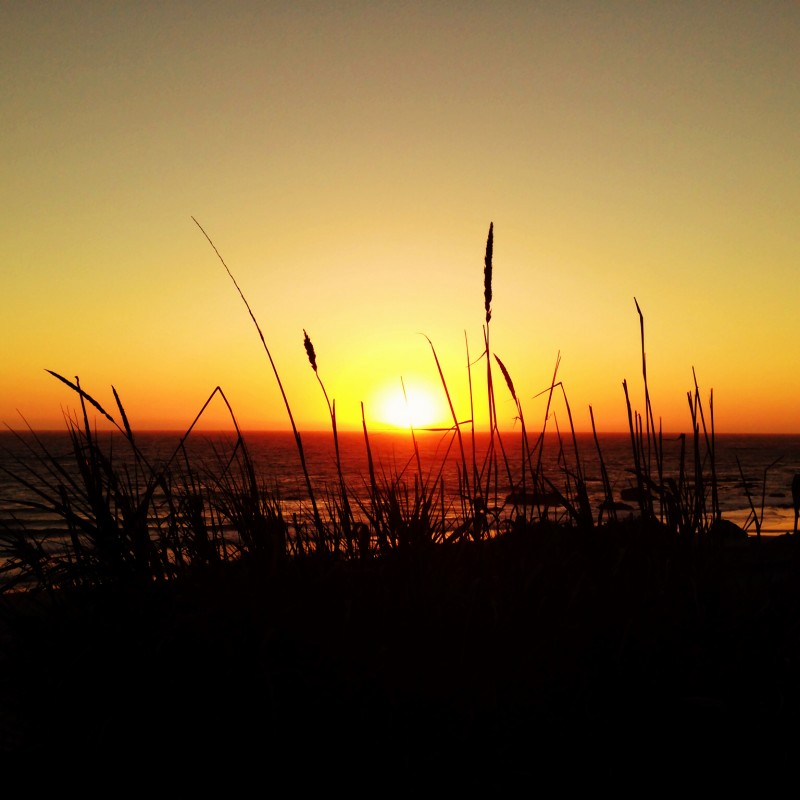 We left the long weekend’s event with a deep appreciation for SLO: the food, the wine, the people, the weather (good god, the weather!), and the breathtaking natural beauty. It’s no wonder that it’s been dubbed “the happiest place on earth”.

While it was our first time attending the annual Savor the Central Coast event, we’ve no doubt that it won’t be our last!