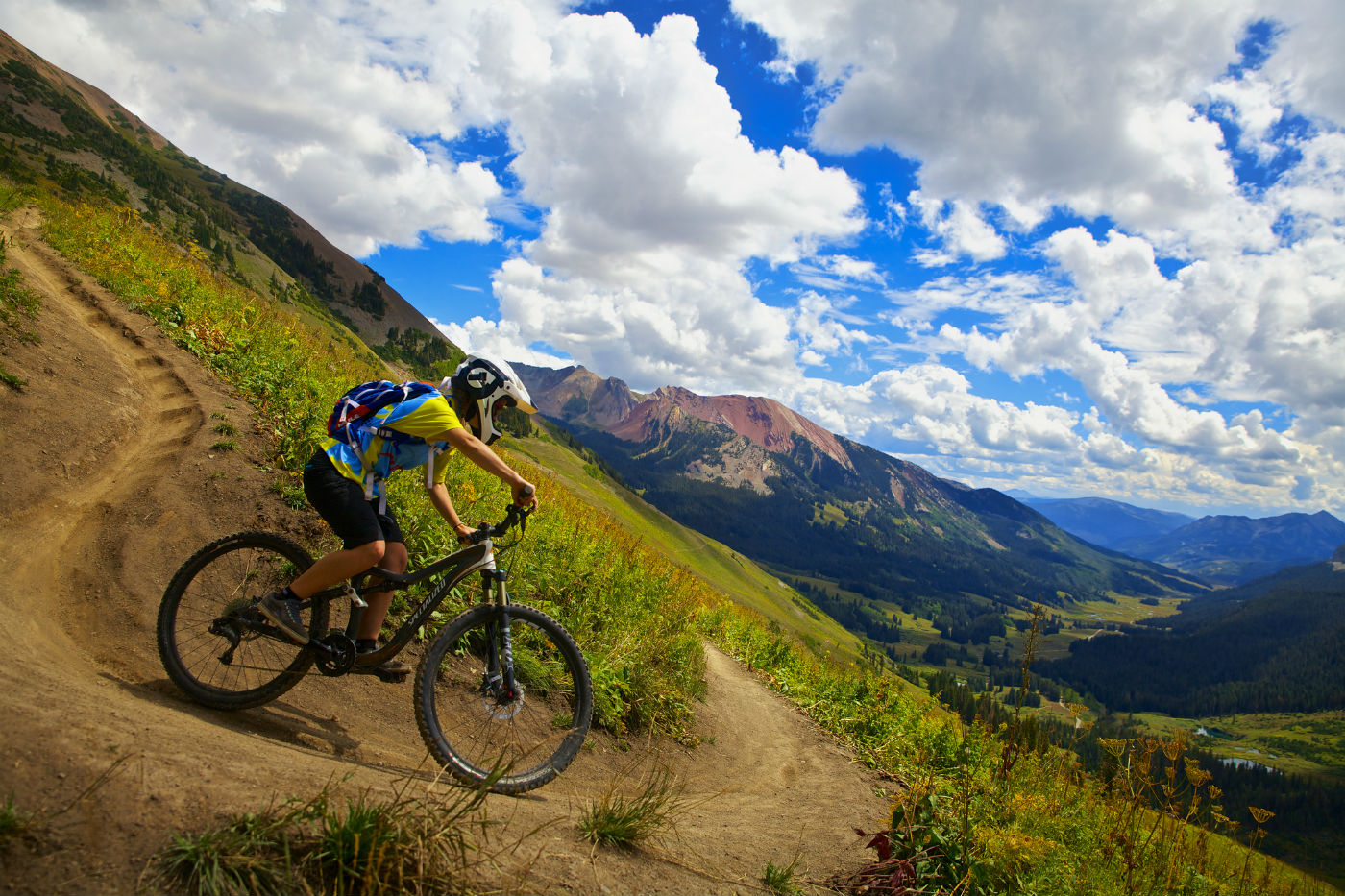 Centuries ago, scaling the world’s mountainous and hilly terrain could be a challenge to even the strongest adventurers. Nowadays, most of the world’s smaller peaks have been thoroughly conquered, either by highways and housing developments or by ski lifts and groomed downhill trails. Even roller skates and skateboards have been used to tackle gravity over the past few years in some incredible ways.

The first aerial trams and chairlifts were put to use on these mountains in the early 1900’s, and while since then we’ve not made many innovations in the ways we climb up a mountain, our creativity seems to know no bounds when it comes to figuring out new and unusual ways to go down. From rolling downhill in a plastic ball to sledding without snow, here are six fun ways to let gravity do the work for you. 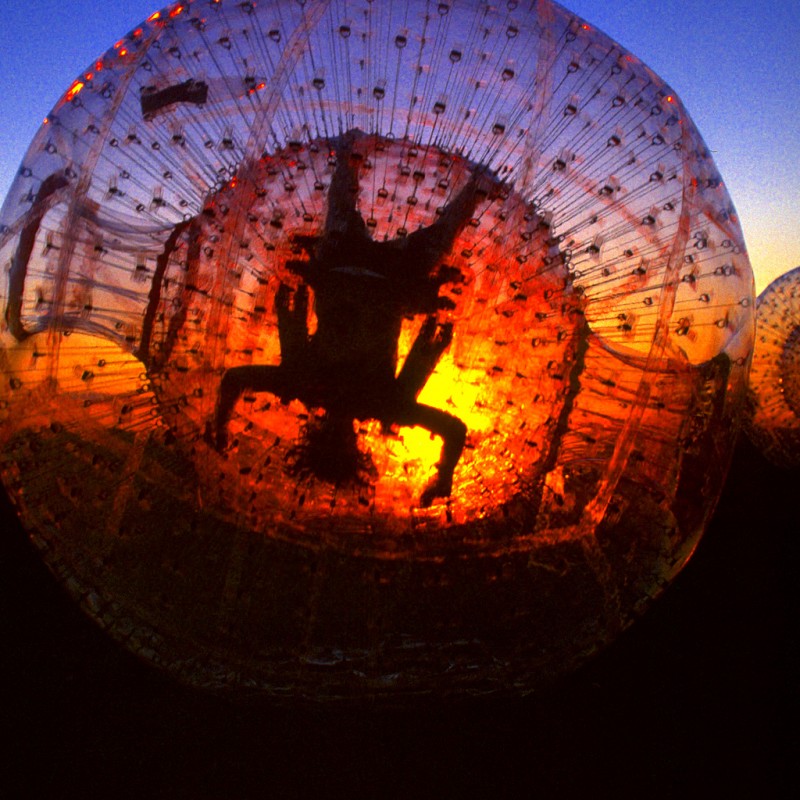 If you ever looked at a hamster rolling about in its big plastic ball and felt a pang of envy, the New Zealand “sport” of zorbing may be for you. The logistics are simple: choose wet or dry, climb into the sphere, and scream bloody hell as you roll downhill encased in what looks like a giant ball of bubble-wrap.

In the dry option, you’re strapped in with a harness so you roll with the ball, upside down, right side up, around and around until you reach the bottom. In the wet version, you and up to two of your friends jump into a zorb containing a few inches of water, and then slip and slide around the interior of the orb until it finally comes to a stop. The entire ride lasts less than a minute, making this likely one of the quickest ways to roll down a mountain. 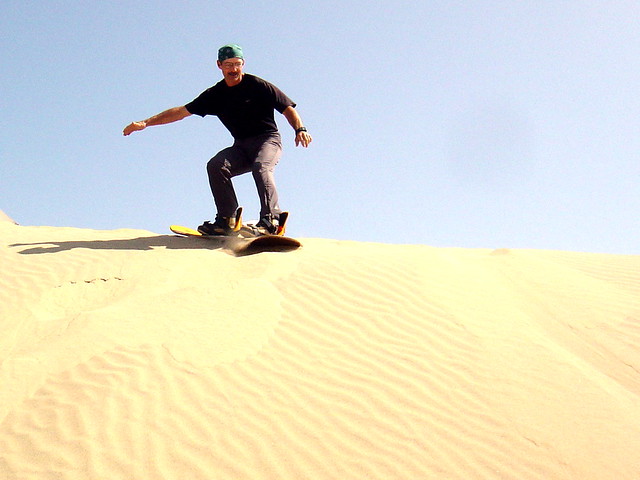 Who needs snow? In Peru (and Namibia, New Zealand and … well anywhere you can find soft dunes) you can surf down a mountain of sand just as you would on a snowboard. Five hours by bus from Lima, the small town of Huacachina is known as Peru’s sand-boarding capital. Most hostels in the backpacker town rent boards for the DIY crowd, while tour operators will rent gear and provide transport for a modest fee.

Once you’ve reached the top of the dunes, wax the bottom of your board, strap your feet in, and try to keep your balance as you skim down the dunes. Just be warned, the waxed boards can pick up speed surprisingly quickly and the only way to brake is to fall into the hot sand.

Mountain biking is popular all over the world, including in Switzerland where they offer another option, putting a unique twist on the typical bike’s design. Instead of the usual mountain bike, you can opt to try the trotti bike – a hybrid of a mountain bike and a Razor scooter.

The wheels are designed like those on a mountain bike, but they’re much lower to the ground, and there’s no seat. Instead you balance standing on the thin scooter platform and steer with the handlebars.

The trotti bike takes some practice and balance is key, but once you get the hang of speeding down the zig-zag path that descends from the Niederhorn, you may think twice about going back to a regular bike. Just don’t forget to keep a good grip on the brakes!

Winter sledding is common at many mountain resorts, but near Munich, you can sled down the Blomberg mountain even when there’s no snow. The Blomberg Rodelbahn summer toboggan is open from March to November and comes in two versions: one runs on wheels as it careens along more than 4200 feet of track while tracing its 720-foot descent. The other runs on rails, going up and down hills like a roller coaster.

Either version permits kids as young as eight years old to take the ride on their own. The mountain also has a small amusement park onsite, making it a popular destination for thrill-seeking families. 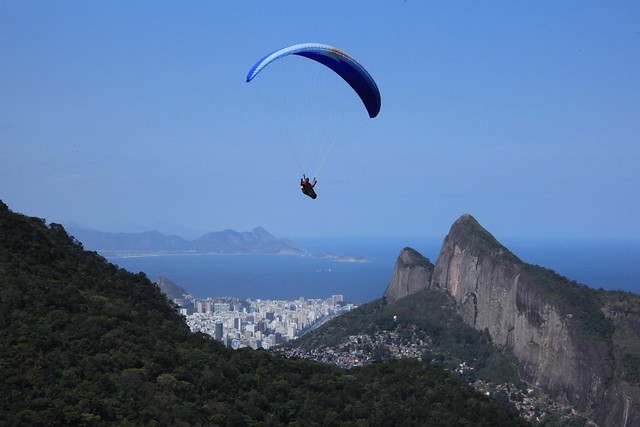 Remember when you were young and your mother would ask, “If your friend jumped off a cliff, would you do it too?” If you were the smart-aleck kid who said yes, consider paragliding or hang-gliding, popular in Rio (and around the world, including California, the Alps, South Africa’s Western Cape, and anywhere else a sheer cliff face meets the right wind conditions).

Though similar, the two forms of flight differ slightly: hang-gliders are more rigid contraptions from which the pilot hangs parallel, while the sport of paragliding involves sitting in a harness below a piece of fabric that resembles a parachute.

Whichever flight style you choose, the adventure begins with a sprint to the cliff’s edge — while strapped to your pilot — followed by the ultimate leap of faith. Cross your fingers and hope the winds are just right. If not, it’s a long way down!

Every spring, hundreds of people of questionable sanity arrive in Gloucestershire, England, to take part in the annual Cheese-Rolling Festival at Cooper’s Hill. Reportedly dating back 200 years, the event draws people from around the world who come to … well, to chase a big wheel of cheese down a very steep hill. 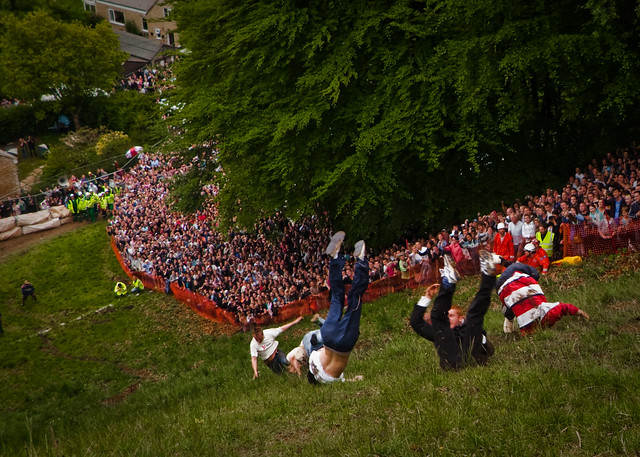 The cheese, a wheel of Double Gloucestershire, begins its descent and is quickly followed by race competitors. While technically their goal is to catch the cheese, the speed at which it travels (up to 70 miles per hour) usually prevents its capture. Add in the steep angle of the concave hill and the speed of the runners, and the race is really more like a brilliant spectacle of trips and tumbles, many of which result in injury to the runners and spectators.

In fact, the 2011 event was held without official management due to safety concerns and it’s expected that future years may be in jeopardy as well. However locals seem determined to keep the tradition alive even if it’s not as a formally organized event.