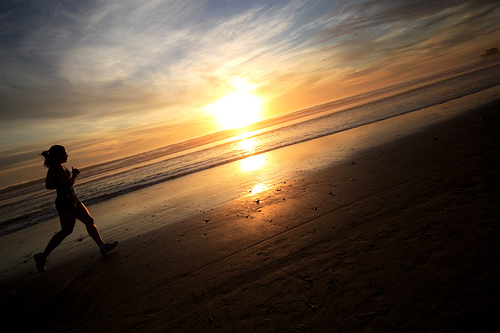 The Spirit of the Running People: 3 Cultures You Should Know

Christopher McDougall explores several theories concerning the “Running Man” argument in human evolution: why should we as a species be able to run? Compared to most animals, we’re pitiful when it comes to speed, and we gave up a great deal of strength by freeing up our arms.

Nevertheless, it seems as though man is unique in its running ability; we are the only species of mammal that can take more than one breath for each step, and our ability to sweat allows us to essentially run down prey over time.

Antelope don’t get shin splints. Wolves don’t ice-pack their knees. I doubt that 80 percent of all wild mustangs are annually disabled with impact injuries. It reminded me of a proverb attributed to Roger Bannister, who, while simultaneously studying medicine, working as a clinical researcher, and minting pithy parables, became the first man to break the four-minute mile: “Every morning in Africa, a gazelle wakes up,” Bannister said. “It knows it must outrun the fastest lion or it will be killed. Every morning in Africa, a lion wakes up. It knows it must run faster than the slowest gazelle, or it will starve. It doesn’t matter whether you’re a lion or a gazelle – when the sun comes up, you’d better be running.”

If you could ensure an open playing field where no species could veer off course or hide in the shadows, who do you think would be the first place finisher in a race of running animals? Assuming an open playing field where no species could veer off course or hide in the shadows, who would be the first place finisher in a race of running animals? Humans.

The cheetah would start at a huge lead, but tire quickly. Rabbits aren’t much better – capable of sustaining 45 mph over 800 meters. In an hour or two, man will be the only animal that doesn’t need to stop and rest.

Just as McDougall asserts, we are all natural born runners with an eternal mind-body debate. We have the means to conserve energy and not run for survival (ordering Chinese food, online dating to find a mate …), so our brains take control and tell us to relax, grab a beer, and set the TiVo.

However, with many nations (even third-world countries) becoming modernized as the world gets smaller, there are few remaining places on Earth where running is still a way of life, essential to survival, not thought of as fitness or a way to relieve stress after a day of TPS reports. Cultures in which running is life, deeply ingrained in the minds and hearts of natives and impossible to imagine what it would be like otherwise.

But where can we find such “running cultures”? Visitors to Kyoto typically enjoy the rock gardens in Buddhist temples and trying to catch the eye of a Geisha in the Gion District (fat chance). What they fail to realize is just how close they are to some of the greatest endurance athletes in the world.

The marathon monks, who live in the Enryaku Temple atop Mount Hiei, are quite possibly the greatest anomaly in Japanese society, if not the world. Few choose to live their lives according to such strict guidelines, especially when it comes to feats of physical prowess. Pilgrims who set themselves on this path are called gyoja (è¡Œè€…, literally “moving man”), and the act of circling the mountains again and again kaihogyo (å›žå³°è¡Œ).

Wearing only straw sandals (replaced often), white robes, a staff, and hat, each marathon monk begins walking or running approximately 50 km around the mountain to return in time for meditation and the meal. This is done over 100, 700, or 1000 days, depending on how far along the initiated is in his monastic training.

After hundreds of days of running 50+ km, the monks begin a fast: nine days in a fixed meditation position (sitting full or half lotus, back straight) without water, food, or sleep. It is believed that by bringing the body so close to death, the monks will develop a greater appreciation and sensitivity to life, being able to “hear ashes fall form incense sticks, smell and identify foods from miles away and see the sun and moonlight seep into the interior of the temple.”

In case you’re wondering, there have been only 46 men to successfully complete the 1000-day quest.

Running meditation is well known in Buddhism; people unfamiliar with practices in these temples always assume that monks’ minds are constantly in motion, working to unravel the secrets of the universe and the deeper meaning of life. In reality, meditation is nothing more than training oneself to focus entirely on the present: the breath going in and out of the lungs, the wind caressing your face, the birds chirping from a nearby tree … Running meditation is only natural, by focusing on putting one foot in front of the other and communing with nature one step at a time. The featured people of Born to Run, the Tarahumara are an isolated tribe of RarÃ¡muri (running people) living in one of the most remote places on the planet: between the mountains of Copper Canyon, just west of Chihuahua, Mexico.

McDougall chose well when he decided to focus his efforts on these runners. Instead of facing against the conquistadors hundreds of years ago, they chose to run and hide between sheer cliffs in the Copper Canyon, and have pretty much been there ever since.

For the Tarahumara, running is life. They run between mesas in Mexico at temperatures rivaling Death Valley, sometimes unsure whether water is waiting for them. More to the point, it’s fun; runners range from teenagers to grandfathers with the same level of skill, and all compete in the games: kicking a ball from runner to runner for over fifty miles, sometimes after a day of binging on corn beer and smoking.

That’s not to say they don’t have their secrets. Iskiate, a concoction similar to liquid energy, is one mystery of the running people. Huaraches, the leather sole with straps used by the Tarahumara as footwear, is an anomaly in itself; westerners spend $100+ on streamlined, supported, high-tech running shoes, only to either stop running, get injured, or wear them out prematurely. The RarÃ¡muri, on the other hand, have been running for hundreds of years, millions of miles between them all, and have developed the most efficient design for a “shoe” – a single leather slab.

What about the future? Will we still be seeing these running people returning to the mountains after a long day on the road? Possibly. The Mexican government isn’t making things any easier, by commissioning roads to be built through the canyons, roads that benefit drug cartels, not the indigenous people … a few nearby Tarahumara villages have already shucked their running heritage, bought prepackaged foods, and traveled into the cities in search of jobs to support their new habits.

Nevertheless, as long as the spirit of the running people stays alive, they will find their way. Who knows? They might run across the whole of Mexico to find another secluded area if the cartels push them too far. Let’s just hope for the best.

A girl running down the beach © aarmono

My high school coach came up with a great idea for the cross country team shirt: “In my mind I am Kenyan.” I continued that creed during my Japanese residency:

The Kenyans always conjure images of distance running, impossible feats of endurance, and barefoot jogging through grassy fields. It’s no wonder they’ve been major players in nearly every major marathon worldwide; with two exceptions (South Korea and Ethiopia), Kenya has dominated the Boston Marathon since 1991.

Although the Maasai, a tribe indigenous to Kenya, still holds on to much of their nomadic heritage, it’s unlikely they still use running as a tool for hunting. For that, you’d best look at …

The Bushmen of the Kalahari

There are over six billion people on this planet. How many rely on running for survival? Obviously the marathon monks need such activity to satisfy the soul, but when they complete their pilgrimage, there is food and drink waiting in the temple. Very few Bushmen remain who choose to keep up with their natural hunting skills (bows and arrows, tracking), and are able to literally run an animal to death.

As a hunter-gatherer, you’re never off the clock; you can be walking home after an exhausting day of collecting yams, but if fresh game scuttles into view, you drop everything and go.

One particular group is able to run in a pack, herding kudus for more than fifteen miles before the animals succumb to the heat and their failing hearts. All in all, it’s still easier than crouching low, sneaking up on your prey, and hoping the first arrow strikes true.