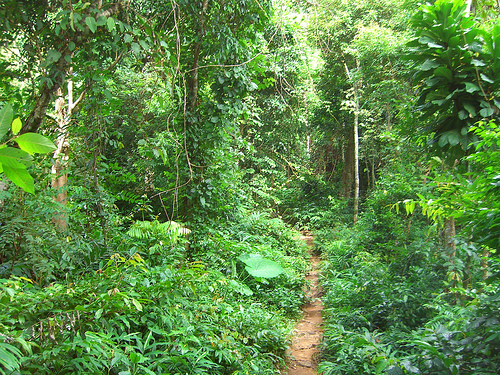 Rumble in the Jungle: Surviving Macaques and Danish Tourists in Thailand

If my first three weeks in the Thai jungle taught me one thing, it was this: I was not prepared, mentally or emotionally, to be a guide. There was nothing I could really do about that, and while it’s never stopped me from doing anything before (and it certainly wasn’t going to stop me now), I figured the least I could do was be better equipped.

I combed the local markets, piecing together odds and ends for a survival kit: bandages, medicine for sunstroke, salt tablets, anti-biotic cream, anything that might come in handy, at a reasonable price (the Jungle Adventure Tour Company did not share my sense of responsibility, or expenses, in these matters). Once I had the essentials, I shopped for something to complete my Look, something to make up for my utter lack of experience and competence, something that said, “I’m not just another backpacker who’s taking a job away from the locals, I’m a Jungle Guide.”

The first thing I found was a machete, but I couldn’t quite work out how to hang it from my belt and walk without cutting whole chunks out of my leg. I searched for something a little safer; I wanted to cultivate a certain aura of danger without actually hurting myself. Eventually I found the perfect accessory: a classic Clark Gable Mogambo African Safari hat with the brim snapped up on one side. I tried it on and instantly became the Great White Hunter. The only things missing were the elephant gun and the team of porters, but I couldn’t afford them.

The morning after my purchase, I led a trek out in the jungle, proudly, no, shamelessly wearing my hat, forgetting the survival kit back at the compound. I swaggered down the trail, leading a tour package of Danish girls who put their young, nubile lives into my now oh-so-capable hands.

Nothing. I lowered my hand. We moved on. A few minutes later, another Tcht! I stopped, my hand raised. What was out there? Again I looked. I listened. I sniffed for the scent of animals. After only a few weeks of being in the jungle, I noticed that all my senses were becoming more acute, alive, sharper than ever before. I could almost feel the jungle. I was the jungle.

The girls were getting antsy and chattery, but I just knew there was something out there. I whispered back to them, “Whatever you do, stay close and do not, I repeat, do not pick up any babies.”

“Babies? What are you talking about?” one of them asked.

“Ssh!” it wasn’t the time for questions.

Earlier in the week, I took a hike on my own, on a trail I had never been before. I was passing a deep ravine when I heard something crunch. It was slight and far off, but it was something. I decided to wait around and see if anything turned up.

After a little while there was another crunch. This time is was closer. Then there was another, and then more. The sounds multiplied, got louder and closer. The air filled with the stink of animal. My heart started racing. Blood pounded in my ears. For all I knew, it could have been a herd of elephants. I crouched down behind a tree. If a herd of elephants suddenly found me in the middle of nowhere, they could get startled, and God knows what they might do.

Hundreds of crunches spread throughout the ravine, just below the ridge, just below my feet. Then, up over the rim they came: eighty, ninety, maybe a hundred monkeys – Macaques – chattering, running, jumping, tumbling. I stayed absolutely still, holding my breath. I didn’t want to scare them off. 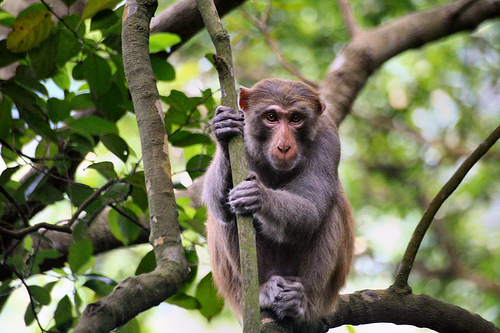 Macaque – Up Close and Personal © laszlo-photo

In the midst of the ruckus, I sensed something next to me. I turned slowly and looked down. It was a fuzzy, gray, wide-eyed, baby Macaque, standing stock-still, staring at me. Maybe he was frightened or confused. Maybe he was just curious. I held out my hand as though I was offering him some food. He came to me tentatively and sniffed at my hand. I opened it. He jumped back, then slowly returned. He probed my palm for a while and then climbed on, crawling up my arm. He sat on my shoulder and surveyed his new view. I didn’t move a muscle. Then he climbed around the back of my neck to my other shoulder. I extended my arm straight out and he crawled to the end, cradled in my palm.

Then: a growl. It was then that I saw his mother, chest puffed and fangs bared. I slowly backed away, gibbering sounds that I felt would be soothing to a monkey, but she wasn’t buying it. I quickly, but gently, lowered her baby to the ground. Once she saw he was safe, Mom came tearing after me. I turned and ran, but she was too fast. She leapt onto my calf and took a bite. I fell to the ground, yelling and kicking wildly. I managed to shake her loose, then jumped up and ran away. After about a half a kilometer, when I felt safe enough to stop, I checked the wound. It wasn’t too deep, just a graze. I rinsed it off at a nearby stream and made a mental note to visit the local clinic and maybe buy some anti-biotic cream. 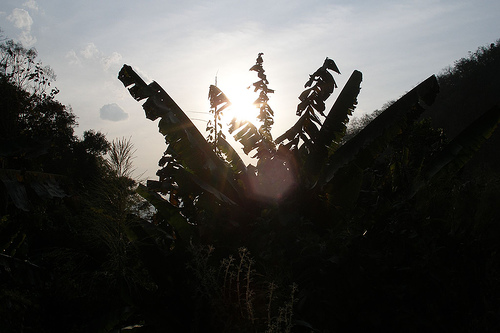 Staring at the Sun, Thailand © Argenberg

Back on the trail with the Danes, my hand was still raised as I waited for another sound ”¦

Still nothing. We moved on, maybe three steps, then Tcht! Alright, I thought, there was definitely something out there and it was definitely worth waiting for.

Hehehe! What was the hell was that? It seemed to be coming from behind me. Hehehe!

I turned around very slowly. There they were”¦ the Danish girls. Their hands were over their mouths, barely restraining themselves from giggling. “What’s so funny?” I asked.

“You stop every time we throw away a banana peel, then you sniff around like a”¦ a mouse. Here, look,” she threw a peel off into the bush, Tcht!

They burst out laughing. I took off my hat. It just didn’t seem to fit right anymore.