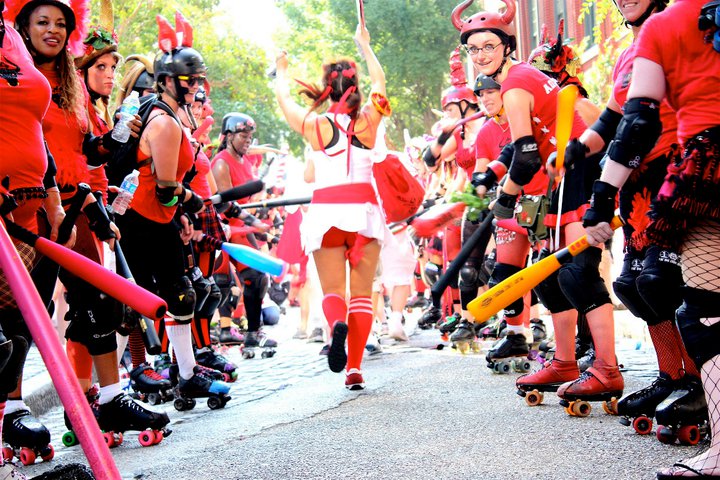 Remixing Traditions at The Rolling of the Bulls

Since time immemorial, traditions have moved from one locale to another, and evolved in the process. Sweet and sour chicken balls may be unheard of in China, but are a staple of western Chinese takeout boxes, and you will never convince a Brit that chicken tikka masala isn’t Indian food. Generations from now, people across America may be surprised to find that in Spain they don’t have wifflebat-wielding roller derby girls chasing people through the streets.

The Rolling of the Bulls is a new take on Pamplona’s famous festival of San Fermin where bulls are let loose in the streets and crazy people attempt to outrun them. The key difference is that the new spin on San Fermin — which takes place on July 13th — contains no actual bulls. Instead, roller derby girls donning horns and armed with wiffleball bats chase participants through the streets. New Orleans and Charleston may have pioneered this newfangled tradition, but now Hampton, Virginia aims to popularize it.

Part of the Downtown Hampton Block Party, The Rolling of the Bulls is put on by the Marker20 restaurant to benefit the Dominion Derby Girls flat-track roller derby league. The event also includes a similarly remixed version of one of Spain’s other festivals, La Tomatina. Whereas in Spain it is a ginormous tomato-based food fight, Hampton’s Balloontina will see 2,000 balloons filled with red food coloring become airborne.